For a given positive random variable V>0 and a given Z∼ N(0,1) independent of V, we compute the scalar t_0 such that the distance between Z√(V) and Z√(t_0), in the L^2() sense, is minimal. We also consider the same problem in several dimensions. Keywords: Normal approximation, Gaussian scale mixture, Plancherel theorem. 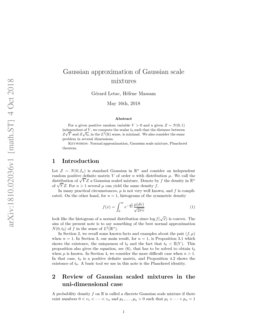 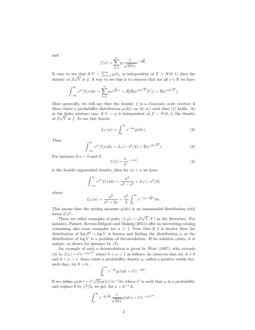 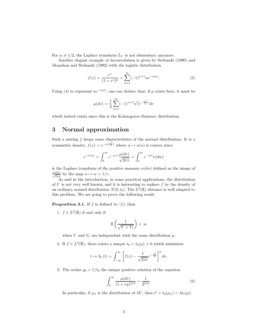 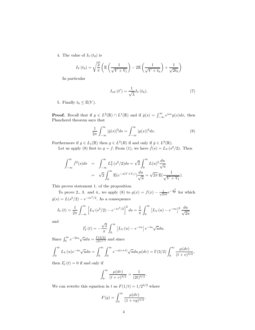 Let Z∼N(0,In) is standard Gaussian in Rn and consider an independent random positive definite matrix V of order n with distribution μ. We call the distribution of √VZ a Gaussian scaled mixture. Denote by f the density in Rn of √VZ. For n>1 several μ can yield the same density f.

In many practical circumstances, μ is not very well known, and f is complicated. On the other hand, for n=1, histograms of the symmetric density

look like the histogram of a normal distribution since

logf(√x) is convex. The aim of the present note is to say something of the best normal approximation N(0,t0) of f in the sense of L2(Rn).

In Section 2, we recall some known facts and examples about the pair (f,μ) when n=1. In Section 3, our main result, for n=1, is Proposition 3.1 which shows the existence, the uniqueness of t0 and the fact that t0<E(V). This proposition also gives the equation, see (6), that has to be solved to obtain t0 when μ is known. In Section 4, we consider the more difficult case when n>1. In that case, t0 is a positive definite matrix, and Proposition 4.2 shows the existence of t0. A basic tool we use in this note is the Plancherel identity.

2 Review of Gaussian scaled mixtures in the uni-dimensional case

f on R is called a discrete Gaussian scale mixture if there exist numbers 0<v1<⋯<vn and p1,…,pn>0 such that p1+⋯+pn=1 and

It easy to see that if V∼∑ni=1piδvi is independent of Z∼N(0,1) then the density of Z√V is f. A way to see this is to observe that for all s∈R we have

More generally, we will say that the density f is a Gaussian scale mixture

if there exists a probability distribution

For instance if a>0 and if

is the double exponential density, then for |s|<a we have

This means that the mixing measure μ(dv)

is an exponential distribution with mean

For α≠1/2, the Laplace transform LV is not elementary anymore.

Using (4) to represent ne−n|x|, one can deduce that, if μ exists here, it must be

which indeed exists since this is the Kolmogorov-Smirnov distribution.

Such a mixing f keeps some characteristics of the normal distribution: It is a symmetric density, f(x)=e−κ(x22) where u↦κ(u) is convex since

is the Laplace transform of the positive measure ν(dw) defined as the image of μ(dv)√2πv by the map u↦w=1/v.

As said in the introduction, in some practical applications, the distribution of V is not very well known, and it is interesting to replace f by the density of an ordinary normal distribution N(0,t0). The L2(R) distance is well adapted to this problem. We are going to prove the following result.

This proves statement 1. of the proposition.

4 Extension to the Euclidean space

Denote by P the convex cone of real positive definite matrices of order n. A scaled Gaussian mixture f on Rn is the density of a random variable X on Rn of the form X=V1/2Z where V∼μ

is a random matrix in

P independent of the standard random Gaussian variable Z∼N(0,In). In this section, we study the conditions that the distribution μ(dv) must satisfy for f to be in L2(Rn), and we find a Gaussian law N(0,t0) which is the closest to f in the L2(Rn) sense.

An important remark is in order: for n>1, the measure μ which generates a given f is not unique.

Example 4. Let p>(n−1)/2 and consider the Wishart distribution μp with shape parameter p and expectation pIn. Then since

we can claim that

p and mean p/2. Consider also the distribution μ of V=XIn. Then

4.2 Some integrals for the standard Gaussian distribution

We recall here two simple formulas. We use the convention that if s∈Rn it is written aa a column matrix and s∗

is its transposed matrix and is a row vector.

Proof. Without loss of generality, we may assume that A is diagonal, and the proof is obvious in this particular case.

4.3 Existence of the best normal approximation

Proposition 4.2. Let μ(dv) be a probability distribution on the convex cone P of positive definite matrices of order n. Let f(x) deote the density of the random variable X=V1/2Z of Rn where V∼μ is independent of Z∼N(0,In). Then

To prove part 2, we use Plancherel theorem again and obtain

We then want to show that the minimum of I(t) is reached at some t0∈P. Let

For C>0 let us show that

By dominated convergence, it follows that I2(y(k))→k→∞0 and this proves that K2 is bounded. We have therefore shown that K1 is compact. This proves that the minimum of I1(t) and I(t) is reached at some point t0 of P.

The last task is to show that t0 is a solution of equation (???). Since I(t) is differentiable and reaches its minimum on the open set P, the differential of I(t) must cancel at t0.

Denote by S the linear space of symmetric real matrices of dimension n equipped with the scalar product ⟨s,s1⟩=trace(ss1). The differential of I is the following linear form on S

The equality I′(t)=0 is equivalent to

Comment. While it is highly probable that the value t0 at which I(t) reaches its minimum is unique, it is difficult to show for n>1 that the complicated equation (9) has a unique solution: there is no reason to think that the function t↦I(t) is convex. This is not the case for n=1.