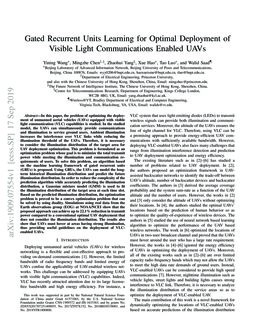 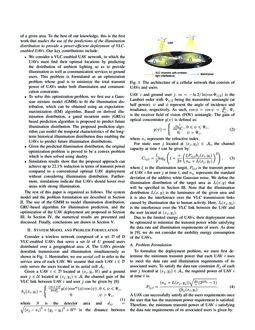 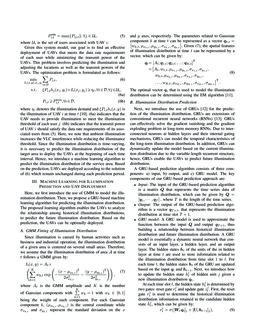 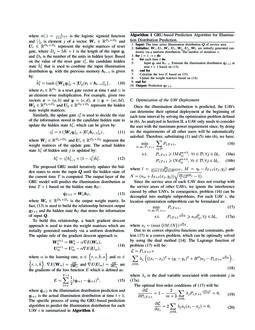 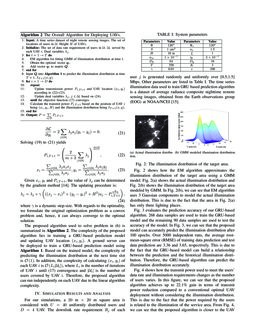 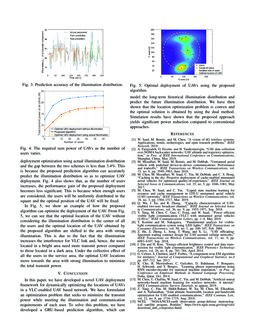 Deploying unmanned aerial vehicles (UAVs) for wireless networking is a flexible and cost-effective approach to providing on-demand communications [12]. However, the limited bandwidth of radio frequency bands and limited energy of UAVs confine the applicability of UAV-enabled wireless networks. This challenge can be addressed by equipping UAVs with visible light communication (VLC) capabilities. Indeed, VLC has recently attracted attention due to its large license-free bandwidth and high energy efficiency. For instance, a VLC system that uses light-emitting diodes (LEDs) to transmit wireless signals can provide both illumination and communication services. Moreover, the altitude of the UAVs ensures the line of sight channel for VLC. Therefore, using VLC can be a promising approach to provide energy-efficient UAV communications with sufficiently available bandwidth. However, deploying VLC-enabled UAVs also faces many challenges that range from illumination interference detection and prediction to UAV deployment optimization and energy efficiency.

The existing literature such as in [7, 10, 3, 4, 13] has studied a number of problems related to UAV deployment. In [7], the authors proposed an optimization framework in UAV-assisted backscatter networks to identify the trade-off between UAV’s altitude, number of backscatter devices and backscatter coefficients. The authors in [10]

derived the average coverage probability and the system sum-rate as a function of the UAV altitude and the number of users. However, the works in

[7] and [10] only consider the altitude of UAVs without optimizing their locations. In [3], the authors studied the optimal UAVs’ locations based on the prediction of human behavior so as to optimize the quality-of-experience of wireless devices. The authors in [4]

studied the use of neural network based learning algorithm to optimize the performance of the UAV based wireless networks. The work in

[13] optimized the locations of UAVs in two-user broadcast channel and proved that the UAVs must hover around the user who has a large rate requirement. However, the works in [3, 4, 13] ignored the energy efficiency of UAVs in optimizing the deployment of UAVs. Moreover, all of the existing works such as in [7, 10, 3, 4, 13] are over limited capacity radio frequency bands which may not allow the UAVs to meet the high data rate demands of ground users. Instead, VLC-enabled UAVs can be considered to provide high speed communications [14]. However, nighttime illumination such as vehicle lights, street lights and building lights causes strong interference to VLC link. Therefore, it is necessary to analyze the illumination distribution of the service areas so as to optimize the deployment of VLC-enabled UAV.

The main contribution of this work is a novel framework for dynamically optimizing the locations of VLC-enabled UAVs based on accurate predictions of the illumination distribution of a given area. To the best of our knowledge, this is the first work that studies the use of the predictions of the illumination distribution to provide a power-efficient deployment of VLC-enabled UAVs. Our key contributions include:

The rest of this paper is organized as follows. The system model and the problem formulation are described in Section II. The use of the GMM to model illumination distribution, GRU-based algorithm for illumination prediction, and the optimization of the UAV deployment are proposed in Section III. In Section IV, the numerical results are presented and discussed. Finally, conclusions are drawn in Section V.

Consider a wireless network composed of a set D of D VLC-enabled UAVs that serve a set U of U ground users distributed over a geographical area A. The UAVs provide downlink transmission and illumination simultaneously as shown in Fig. 1. Hereinafter, we use aerial cell to refer to the service area of each UAV. We assume that each UAV i∈D only serves the users located in its aerial cell Ai.

Given a UAV i∈D located at (xi,yi,H) and a ground user j∈U located at (xj,yj)∈A, the channel gain of the VLC link between UAV i and user j can be given by [9]:

where S is the detector area and dij=√(xj−xi)2+(yj−yi)2+H2 is the distance between UAV i and ground user j. m=−ln2/ln(cosΦ1/2) is the Lambert order with Φ1/2 being the transmitter semiangle (at half power). ψ and ϕ represent the angle of incidence and irradiance, respectively. As such, cosϕ=cosψ=Hdij. Ψc is the receiver field of vision (FOV) semiangle. The gain of optical concentrator g(ψ) is defined as:

where ne represents the refractive index.

For static user j located at (xj,yj)∈Ai, the channel capacity at time t can be given by:

where ξ is the illumination target, Pij,t is the transmit power of UAV i for user j at time t, and nw

represents the standard deviation of the additive white Gaussian noise. We define the illumination distribution of the target area as

Due to the limited energy of UAVs, their deployment must be optimized to minimize the transmit power while satisfying the data rate and illumination requirements of users. As done in [8], we do not consider the mobility energy consumption of the UAVs.

To formalize the deployment problem, we must first determine the minimum transmit power that each UAV i uses to meet the data rate and illumination requirements of its associated users. To satisfy the data rate constraint Rj of each user j located at (xj,yj)∈Ai, the required power of UAV i at time t is:

A UAV can successfully satisfy all the users’ requirements once the user that has the maximum power requirement is satisfied. Therefore, the minimum transmit power of UAV i satisfying the data rate requirements of its associated users is given by:

where Ui is the set of users associated with UAV i.

Given this system model, our goal is to find an effective deployment of UAVs that meets the data rate requirements of each user while minimizing the transmit power of the UAVs. This problem involves predicting the illumination and adjusting the locations as well as the transmit powers of the UAVs. The optimization problem is formulated as follows:

can be represented as a vector

qk,t=[wk,t,μxk,t,μyk,t,σxk,t,σyk,t]. Given (7), the spatial features of illumination distribution at time t can be represented by a vector, which can be given by:

The optimal vector qt that is used to model the illumination distribution can be determined using the EM algorithm [1].

Next, we introduce the use of GRUs [5]

for the prediction of the illumination distribution. GRUs are extensions of conventional recurrent neural networks (RNNs)

Iii-C Optimization of the UAV Deployment

Once the illumination distribution is predicted, the UAVs can determine their optimal deployment at the beginning of each time interval by solving the optimization problem defined in (6). As analyzed in Section II, a UAV only needs to consider the user with the maximum power requirement since, by doing so, the requirements of all other users will be automatically satisfied. Therefore, substituting (1) and (5) into (6), we have:

Since the service area of each UAV does not overlap with the service areas of other UAVs, we ignore the interference caused by other UAVs. In consequence, problem (16) can be decoupled into multiple subproblems. For each UAV i, the location optimization subproblem can be formulated as:

Due to its convex objective functions and constraints, problem (17) is a convex problem, which can be optimally solved by using the dual method [15]. The Lagrange function of problem (17) will be:

where λj is the dual variable associated with constraint j in (17a).

The optimal first-order conditions of (17) will be:

Given xi, yi and Pi,T+1, the value of λj can be determined by the gradient method [15]. The updating procedure is:

where γ is a dynamic step-size. With regards to the optimality, we formulate the original optimization problem as a convex problem and, hence, it can always converge to the optimal solution.

For our simulations, a 20 m × 20 m square area is considered with U=40 uniformly distributed users and D=4 UAV. The downlink rate requirement Rj of each user j is generated randomly and uniformly over [0.5,1.5] Mbps. Other parameters are listed in Table I. The time series illumination data used to train GRU based prediction algorithm is a dataset of average radiance composite nighttime remote sensing images, obtained from the Earth observations group (EOG) at NOAA/NCEI [11].

In Fig. 5, we show an example of how the proposed algorithm can optimize the deployment of the UAV. From Fig. 5, we can see that the optimal location of the UAV without considering the illumination distribution is the center of all the users and the optimal location of the UAV obtained by the proposed algorithm are shifted to the area with strong illumination. This is due to the fact that the illumination increases the interference for VLC link and, hence, the users located in a bright area need more transmit power compared to those located in a dark area. Under the collective effect of all the users in the service area, the optimal UAV locations move towards the area with strong illumination to minimize the total transmit power.

In this paper, we have developed a novel UAV deployment framework for dynamically optimizing the locations of UAVs in a VLC-enabled UAV based network. We have formulated an optimization problem that seeks to minimize the transmit power while meeting the illumination and communication requirements of each user. To solve this problem, we have developed a GRU-based prediction algorithm, which can model the long-term historical illumination distribution and predict the future illumination distribution. We have then shown that the location optimization problem is convex and the optimal solution is obtained by using the dual method. Simulation results have shown that the proposed approach yields significant power reduction compared to conventional approaches.