GANS for Sequences of Discrete Elements with the Gumbel-softmax Distribution

Generative Adversarial Networks (GAN) have limitations when the goal is to generate sequences of discrete elements. The reason for this is that samples from a distribution on discrete objects such as the multinomial are not differentiable with respect to the distribution parameters. This problem can be avoided by using the Gumbel-softmax distribution, which is a continuous approximation to a multinomial distribution parameterized in terms of the softmax function. In this work, we evaluate the performance of GANs based on recurrent neural networks with Gumbel-softmax output distributions in the task of generating sequences of discrete elements. 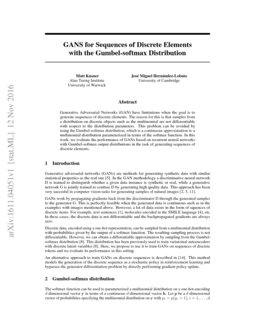 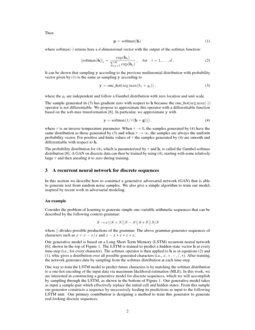 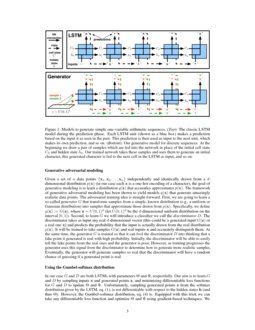 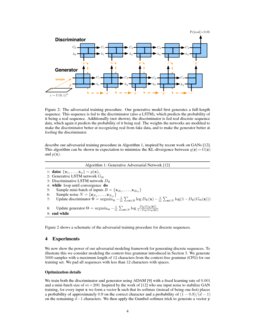 The Gumbel-Softmax is a continuous distribution over the simplex that is...
Andres Potapczynski, et al. ∙

. In the GAN methodology a discriminative neural network D is trained to distinguish whether a given data instance is synthetic or real, while a generative network G is jointly trained to confuse D by generating high quality data. This approach has been very sucessful in computer vision tasks for generating samples of natural images

GANs work by propagating gradients back from the discriminator D through the generated samples to the generator G. This is perfectly feasible when the generated data is continuous such as in the examples with images mentioned above. However, a lot of data exists in the form of squences of discrete items. For example, text sentences Bowman2016 , molecules encoded in the SMILE language gomez2016automatic

, etc. In these cases, the discrete data is not differentiable and the backpropagated gradients are always zero.

Discrete data, encoded using a one-hot representation, can be sampled from a multinomial distribution with probabilities given by the output of a softmax function. The resulting sampling process is not differentiable. However, we can obtain a differentiable approximation by sampling from the Gumbel-softmax distribution

. This distribution has been previously used to train variatoinal autoencoders with discrete latent variables

jang2016categorical . Here, we propose to use it to train GANs on sequences of discrete tokens and we evaluate its performance in this setting.

. This method models the generation of the discrete sequence as a stochastic policy in reinforcement learning and bypasses the generator differentiation problem by directly performing gradient policy update.

where softmax(⋅) returns here a d-dimensional vector with the output of the softmax function:

where the gi are independent and follow a Gumbel distribution with zero location and unit scale.

The sample generated in (3) has gradient zero with respect to h because the one\_hot(argmax(⋅)) operator is not differentiable. We propose to approximate this operator with a differentiable function based on the soft-max transformation jang2016categorical . In particular, we approximate y with

The probability distribution for (

4), which is parameterized by τ and h, is called the Gumbel-softmax distribution jang2016categorical . A GAN on discrete data can then be trained by using (4), starting with some relatively large τ and then anealing it to zero during training.

In this section we describe how to construct a generative adversarial network (GAN) that is able to generate text from random noise samples. We also give a simple algorithm to train our model, inspired by recent work in adversarial modeling.

Consider the problem of learning to generate simple one-variable arithmetic sequences that can be described by the following context-grammar:

where ∣∣ divides possible productions of the grammar. The above grammar generates sequences of characters such as x+x−x/x and x−x∗x∗x∗x.

hochreiter1997long , shown in the top of Figure 1. The LSTM is trained to predict a hidden-state vector h at every time-step (i.e., for every character). The softmax operator is then applied to h as in equations (2) and (1), whic gives a distribution over all possible generated characters (i.e., x,+,−,/,∗). After training, the network generates data by sampling from the softmax distribution at each time-step.

One way to train the LSTM model to predict future characters is by matching the softmax distribution to a one-hot encoding of the input data via maximum likelihood estimation (MLE). In this work, we are interested in constructing a generative model for discrete sequences, which we will accomplish by sampling through the LSTM, as shown in the bottom of Figure

1. Our generative model takes as input a sample-pair which effectively replace the initial cell and hidden states. From this sample our generator constructs a sequence by successively feeding its predictions as input to the following LSTM unit. Our primary contribution is designing a method to train this generator to generate real-looking discrete sequences.

Given a set of n data points {x1,x2…,xn} independently and identically drawn from a d-dimensional distribution p(x) (in our case each x is a one-hot encoding of a character), the goal of generative modeling is to learn a distribution q(x) that accuratley approximates p(x). The framework of generative adversarial modeling has been shown to yield models q(x) that generate amazingly realistic data points. The adversarial training idea is straight-forward. First, we are going to learn a so-called generator G

that transforms samples from a simple, known distribution (e.g., a uniform or Gaussian distribution) into samples that approximate those drawn from

-dimensional uniform distribution on the interval

we will introduce a classifier we call the

In our case G and D are both LSTMs with parameters Θ and Φ, respectfully. Our aim is to learn G and D by sampling inputs x and generated points z

, and minimizing differentiable loss functions for

G and D to update Θ and Φ. Unfortunately, sampling generated points z from the softmax distribution given by the LSTM, eq. (1), is not differentiable with respect to the hidden states h (and thus Θ). However, the Gumbel-softmax distribution, eq. (4) is. Equipped with this trick we can take any differentiable loss function and optimize Θ and Φ using gradient-based techniques. We describe our adversarial training procedure in Algorithm 1, inspired by recent work on GANs sonderby2016amortised . This algorithm can be shown in expectation to minimize the KL-divergence between q(z)=G(z) and p(x).

Figure 2 shows a schematic of the adversarial training procedure for discrete sequences.

We now show the power of our adversarial modeling framework for generating discrete sequences. To illustrate this we consider modeling the context-free grammar introduced in Section 3. We generate 5000 samples with a maximum length of 12

characters from the context-free grammar (CFG) for our training set. We pad all sequences with less than

We train both the discriminator and generator using ADAM kingma2014adam with a fixed learning rate of 0.001 and a mini-batch size of m=200. Inspired by the work of sonderby2016amortised who use input noise to stabilize GAN training, for every input x we form a vector h such that its softmax (instead of being one-hot) places a probability of approximately 0.9 on the correct character and a probability of (1−0.9)/(d−1) on the remaining d−1 characters. We then apply the Gumbel-softmax trick to generate a vector y as in equation (4). We use this vector instead of x throughout training. We train the generator and discriminator for 20,000 mini-batch iterations. During the training we linearly anneal the temperature of the Gumbel-softmax distribution, from τ=5 (i.e., a very flat distribution) to τ=1 (a more peaked distribution) for iterations 1 to 10,000 and then kept at τ=1 until training ends.

Figure 3 (a) shows the generator and discriminator losses throughout training for this setting. We experimented with increasing the size of the generated samples to 1,000, as this has been reported to improve GAN modeling huszar2015not , shown in Figure 3 (b). We also experimented with just varying the temperature for the input vectors y and fixing the generator temperature to τ=1 (in Figure 3 (c)). Finally, we also tried just introducing random noise into the hidden state and allowing the network to learn an initial cell state C0 (Figure 3 (d)).

Figure 4 shows the text generated by MLE and GAN models. Each row is a sample from either model, each consisting of 12 characters (we have included the blank space character as some training inputs are padded with spaces if less than 12 characters). While the MLE LSTM is not strictly a generative model in the sense of drawing a discrete sequence from a distribution, we include it for reference. We can see that our GAN models are learning to generate alternating sequences of x’s, similar to the MLE result. Specifically, the 4th, 10th, and 17th rows of plot (a), show samples that are very close to the training data, and many such examples exist for the remaining plots as well.

We believe that these results, as a proof of concept, show strong promise for training GANs to generate discrete sequence data. Further, we believe that incorporating recent advances in GANs such as training GANs using variational divergence minimization nowozin2016f or via density ratio estimation uehara2016generative could yield further improvements. We aim to experiment with these in future work.