We investigate upper and lower hedging prices of multivariate contingent claims from the viewpoint of game-theoretic probability and submodularity. By considering a game between "Market" and "Investor" in discrete time, the pricing problem is reduced to a backward induction of an optimization over simplexes. For European options with payoff functions satisfying a combinatorial property called submodularity or supermodularity, this optimization is solved in closed form by using the Lovász extension and the upper and lower hedging prices can be calculated efficiently. This class includes the options on the maximum or the minimum of several assets. We also study the asymptotic behavior as the number of game rounds goes to infinity. The upper and lower hedging prices of European options converge to the solutions of the Black-Scholes-Barenblatt equations. For European options with submodular or supermodular payoff functions, the Black-Scholes-Barenblatt equation is reduced to the linear Black-Scholes equation and it is solved in closed form. Numerical results show the validity of the theoretical results. 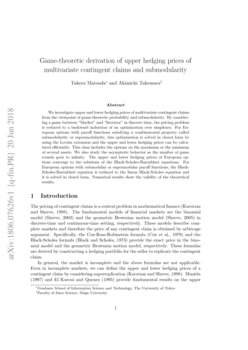 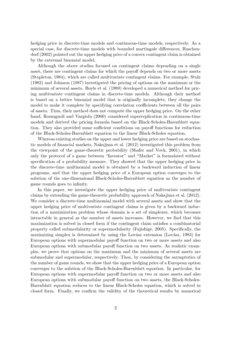 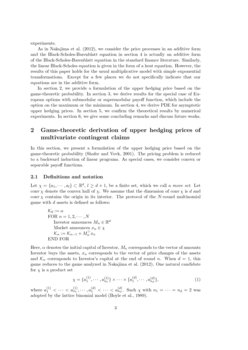 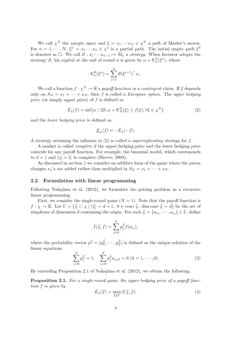 The pricing of contingent claims is a central problem in mathematical finance (Karatzas and Shreve, 1998). The fundamental models of financial markets are the binomial model (Shreve, 2003) and the geometric Brownian motion model (Shreve, 2005) in discrete-time and continuous-time setting, respectively. These models describe complete markets and therefore the price of any contingent claim is obtained by arbitrage argument. Specifically, the Cox-Ross-Rubinstein formula (Cox et al., 1979) and the Black-Scholes formula (Black and Scholes, 1973) provide the exact price in the binomial model and the geometric Brownian motion model, respectively. These formulas are derived by constructing a hedging portfolio for the seller to replicate the contingent claim.

In general, the market is incomplete and the above formulas are not applicable. Even in incomplete markets, we can define the upper and lower hedging prices of a contingent claim by considering superreplication (Karatzas and Shreve, 1998). Musiela (1997) and El Karoui and Quenez (1995) provide fundamental results on the upper hedging price in discrete-time models and continuous-time models, respectively. As a special case, for discrete-time models with bounded martingale differences, Ruschendorf (2002) pointed out the upper hedging price of a convex contingent claim is obtained by the extremal binomial model.

Although the above studies focused on contingent claims depending on a single asset, there are contingent claims for which the payoff depends on two or more assets (Stapleton, 1984), which are called multivariate contingent claims. For example, Stulz (1982) and Johnson (1987) investigated the pricing of options on the maximum or the minimum of several assets. Boyle et al. (1989) developed a numerical method for pricing multivariate contingent claims in discrete-time models. Although their method is based on a lattice binomial model that is originally incomplete, they change the model to make it complete by specifying correlation coefficients between all the pairs of assets. Thus, their method does not compute the upper hedging price. On the other hand, Romagnoli and Vargiolu (2000) considered superreplication in continuous-time models and derived the pricing formula based on the Black-Scholes-Barenblatt equation. They also provided some sufficient conditions on payoff functions for reduction of the Black-Scholes-Barenblatt equation to the linear Black-Scholes equation.

Whereas existing studies on the upper and lower hedging price are based on stochastic models of financial markets, Nakajima et al. (2012) investigated this problem from the viewpoint of the game-theoretic probability (Shafer and Vovk, 2001)

, in which only the protocol of a game between “Investor” and “Market” is formulated without specification of a probability measure. They showed that the upper hedging price in the discrete-time multinomial model is obtained by a backward induction of linear programs, and that the upper hedging price of a European option converges to the solution of the one-dimensional Black-Scholes-Barenblatt equation as the number of game rounds goes to infinity.

In section 2, we provide a formulation of the upper hedging price based on the game-theoretic probability. In section 3, we derive results for the special case of European options with submodular or supermodular payoff function, which include the option on the maximum or the minimum. In section 4, we derive PDE for asymptotic upper hedging prices. In section 5, we confirm the theoretical results by numerical experiments. In section 6, we give some concluding remarks and discuss future works.

In this section, we present a formulation of the upper hedging price based on the game-theoretic probability (Shafer and Vovk, 2001). The pricing problem is reduced to a backward induction of linear programs. As special cases, we consider convex or separable payoff functions.

Let χ={a1,⋯,al}⊂Rd, l≥d+1, be a finite set, which we call a move set. Let convχ denote the convex hull of χ. We assume that the dimension of convχ is d and convχ contains the origin in its interior. The protocol of the N-round multinomial game with d assets is defined as follows:

corresponds to the vector of amounts Investor buys the assets,

xn corresponds to the vector of price changes of the assets and Kn corresponds to Investor’s capital at the end of round n. When d=1, this game reduces to the game analyzed in Nakajima et al. (2012). One natural candidate for χ is a product set

We call χN the sample space and ξ=x1⋯xN∈χN a path of Market’s moves. For n=1,⋯,N, ξn=x1⋯xn∈χn is a partial path. The initial empty path ξ0 is denoted as □. We call S:x1⋯xn−1↦Mn a strategy. When Investor adopts the strategy S, his capital at the end of round n is given by α+KSn(ξn), where

We call a function f:χN→R a payoff function or a contingent claim. If f depends only on SN=x1+⋯+xN, then f is called a European option. The upper hedging price (or simply upper price) of f is defined as

and the lower hedging price is defined as

A strategy attaining the infimum in (2) is called a superreplicating strategy for f.

A market is called complete if the upper hedging price and the lower hedging price coincide for any payoff function. For example, the binomial model, which corresponds to d=1 and |χ|=2, is complete (Shreve, 2003).

As discussed in section 1 we consider an additive form of the game where the prices changes xn’s are added rather than multiplied in SN=x1+⋯+xN.

where the probability vector p˜χ=(p˜χ0,⋯,p˜χd) is defined as the unique solution of the linear equations

By extending Proposition 2.1 of Nakajima et al. (2012), we obtain the following.

For a single-round game, the upper hedging price of a payoff function f is given by

From (2), the upper hedging price ¯Eχ(f) of f is the optimal value of the following linear program:

The dual of this linear program is

From the complementary condition (Boyd and Vandenberghe, 2004), there exists an optimal solution p∗ of the dual problem that has at most d+1 nonzero variables. Then, from the constraint of the dual problem, we have p∗=p˜χ for some ˜χ. Therefore, we obtain (4). ∎

Similarly, the lower hedging price of f for a single-round game is

The relation (4) is interpreted as follows. A probability vector p=(p1,⋯,pl) is called a risk neutral measure on χ if the expectation under p is zero:

Let P(χ) be the set of risk neutral measures on χ. Note that P(χ) is closed and convex. Then, the set {p˜χ∣˜χ∈Γ} coincides with the set of extreme points (vertices) of P(χ). Since the maximum of a linear function on a closed convex set is attained at extreme points, the maximization in (4) is interpreted as searching over all risk neutral measures:

where Ep denotes the expectation with respect to p.

Now, we consider the N-round game. As discussed by Nakajima et al. (2012) for d=1, the upper hedging price is calculated by solving linear programs recursively. Specifically, let ¯f(⋅,N−n):χn→R, n=N,N−1,⋯,0 be given by

The upper hedging price of f:χN→R is given by

Therefore, the upper hedging price ¯Eχ(f) is calculated by a backward induction of (5). In particular, for a European option, ¯f(ξn,N−n) depends only on Sn=x1+⋯+xn and so the required number of calculations (5) grows only polynomially with N.

The lower hedging price E––χ(f) is also calculated by a backward induction. In general, a market with |χ|=d+1 is complete since |Γ|=1, irrespective of f.

Here, we consider the case where the payoff function f is a European option f(ξ)=F(SN) with convex function F. When d=1, the calculation of the upper hedging price of a convex payoff function is reduced to the binomial model (Ruschendorf, 2002), since the maximization in (4) is always uniquely attained by the extreme pair ˜χ={minχ,maxχ}. For general d, we have the following result.

Suppose that f is a European option f(ξ)=F(SN) with convex function F. Let χ0 be the set of vertices of convχ. Then, the upper hedging price of f with move set χ coincides with that with move set χ0:

Thus, from the convexity of f,

for any p∈P(χ). By summing up the right hand side for each point bj of χ0, we obtain

By taking the maximum in the left hand side, we obtain

For simplicity of notation we consider the case K=d and Ak={k} without essential loss of generality. Then, the move set χ is a product set χ=χ1×⋯×χd and the payoff function is written as

We have seen that the calculation of the upper hedging price reduces to backward induction of the maximization (4). In this section, we show that this maximization is solved in closed form if the payoff function f satisfies a combinatorial property called submodularity or supermodularity. As a special case, we discuss the options on the maximum or the minimum. Throughout this section, we assume that the move set χ is a product set (1) with n1=⋯=nd=2, i.e., the lattice binomial model. Note that a(k)1<0<a(k)2 for k=1,⋯,d, because we are assuming that convχ contains the origin in its interior.

The concept of submodularity is fundamental in combinatorial optimization theory

We can extend the definition of submodularity and supermodularity to functions on the hypercube [0,1]d and Rd. For vectors u,v∈Rd, we denote the vectors of componentwise minimum and maximum by u∧v∈Rd and u∨v∈Rd, respectively:

Then, submodular and supermodular functions on the hypercube [0,1]d and Rd are defined as follows.

We note that the concept of multivariate total positivity (MTP2) is closely related to submodularity (Karlin, 1968; Fallat et al., 2017). Namely, a positive function is MTP2 if and only if its logarithm is supermodular.

When ^f:[0,1]d→R or Rd→R is twice continuously differentiable, the submodularity and supermodularity of ^f are characterized by the signs of the mixed second order derivatives as follows.

We only prove the first statement. The proof of the second statement is similar by considering −^f.

Assume ^f is submodular and let ε>0 and ε′>0. Let ei be the unit vector with i-th coordinate one and other coordinates zero. Substituting u=s+εei and v=s+ε′ej into (15),

In considering the maximization (4), the concepts of convex closure and Lovász extension are useful. Dughmi (2009) presents a brief survey on these topics.

Let X={x1,⋯,xd} be a finite set. For a subset A of X, its characteristic vector 1A∈Rd is defined as

From the definition, f− and f+ are convex and concave, respectively.

For a set function f:2X→R, its convex closure and concave closure are given by

Another type of extension was introduced by Lovász (1983) and it plays an important role in submodular function optimization (Fujishige, 2005).

Note that the Lovász extension can be viewed as taking a special value of α in (17). Lovász (1983) showed that the submodularity of a set function f is equivalent to the convexity of its Lovász extension fL. In fact, there is a stronger result as follows.

For a single-round game, the upper hedging price is given by

Since g is a bijective affine map, the first constraint on α in (18) is equivalent to

Since ˜χ is arbitrary, by Proposition 2.1 we obtain

From the definition of the Lovász extension,