We derive optimal L^2-error estimates for semilinear time-fractional subdiffusion problems involving Caputo derivatives in time of order α∈ (0,1), for cases with smooth and nonsmooth initial data. A general framework is introduced allowing a unified error analysis of Galerkin type space approximation methods. The analysis is based on a semigroup type approach and exploits the properties of the inverse of the associated elliptic operator. Completely discrete schemes are analyzed in the same framework using a backward Euler convolution quadrature method in time. Numerical examples including conforming, nonconforming and mixed finite element (FE) methods are presented to illustrate the theoretical results. 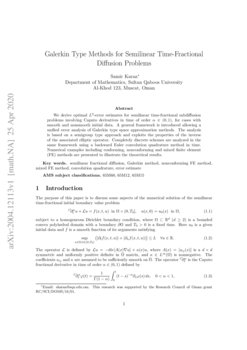 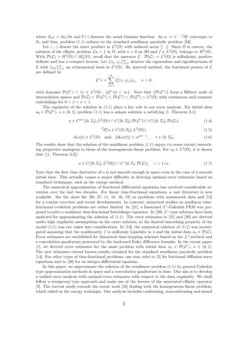 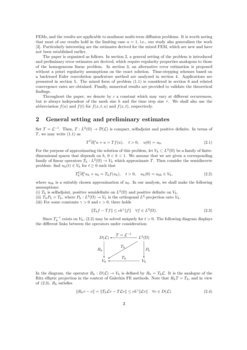 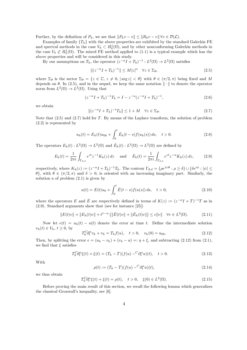 The aim of this paper is to develop and analyze numerical schemes for ap...
Zhengqi Zhang, et al. ∙

The time fractional ODEs are equivalent to the convolutional Volterra in...
Lei Li, et al. ∙

In this work, we present a novel error analysis for recovering a spatial...
Bangti Jin, et al. ∙

subject to a homogeneous Dirichlet boundary condition, where Ω⊂Rd (d≥2) is a bounded convex polyhedral domain with a boundary ∂Ω and T0>0 is a fixed time. Here u0 is a given initial data and f is a smooth function of its arguments satisfying

The operator L is defined by Lu=−div[A(x)∇u]+κ(x)u, where A(x)=[aij(x)] is a d×d symmetric and uniformly positive definite in ¯Ω matrix, and κ∈L∞(Ω) is nonnegative. The coefficients aij and κ are assumed to be sufficiently smooth on ¯Ω. The operator C∂αt is the Caputo fractional derivative in time of order α∈(0,1) defined by

where ∂sφ=∂φ/∂s and Γ(⋅) denotes the usual Gamma function. As α→1−, C∂αt converges to ∂t, and thus, problem (1.1) reduces to the standard semilinear parabolic problem [34].

denotes the eigenvalues and eigenfunctions of

L with {φj}∞j=1 an orthonormal basis in L2(Ω). By spectral method, the fractional powers of L are defined by

form a Hilbert scale of interpolation spaces and

The results show that the solution of the semilinear problem (1.1) enjoys (to some extent) smoothing properties analogous to those of the homogeneous linear problem. For u0∈L2(Ω), it is shown that ([1, Theorem 3.2])

Note that the first time derivative of u is not smooth enough in space even in the case of a smooth initial data. This actually causes a major difficulty in deriving optimal error estimates based on standard techniques, such as the energy method.

The numerical approximation of fractional differential equations has received considerable attention over the last two decades. For linear time-fractional equations, a vast literature is now available. See the short list [26, 27, 11, 10, 16, 18] on problems with nonsmooth data and [12] for a concise overview and recent developments. In contrast, numerical studies on nonlinear time-fractional evolution problems are rather limited. In [21], a linearized L1-Galerkin FEM was proposed to solve a nonlinear time-fractional Schrödinger equation. In [20], L1-type schemes have been analyzed for approximating the solution of (1.1). The error estimates in [21] and [20] are derived under high regularity assumptions on the exact solution, so the limited smoothing property of the model (1.1) was not taken into consideration. In [13], the numerical solution of (1.1) was investigated assuming that the nonlinearity f is uniformly Lipschitz in u and the initial data u0∈D(L). Error estimates are established for linearized time-stepping schemes based on the L1-method and a convolution quadrature generated by the backward Euler difference formula. In the recent paper [1], we derived error estimates for the same problem with initial data u0∈D(Lν), ν∈(0,1]. The new estimates extend known results obtained for the standard semilinear parabolic problem [14]. For other types of time-fractional problems, one may refer to [5] for fractional diffusion-wave equations and to [28] for an integro-differential equation.

In this paper, we approximate the solution of the semilinear problem (1.1) by general Galerkin type approximation methods in space and a convolution quadrature in time. Our aim is to develop a unified error analysis with optimal error estimates with respect to the data regularity. We shall follow a semigroup type approach and make use of the inverse of the associated elliptic operator [3]. The current study extends the recent work [16] dealing with the homogeneous linear problem, which relied on the energy technique. Our analysis includes conforming, nonconforming and mixed FEMs, and the results are applicable to nonlinear multi-term diffusion problems. It is worth noting that most of our results hold in the limiting case α=1, i.e., our study also generalizes the work [3]. Particularly interesting are the estimates derived for the mixed FEM, which are new and have not been established earlier.

The paper is organized as follows. In section 2, a general setting of the problem is introduced and preliminary error estimates are derived, which require regularity properties analogous to those of the homogeneous linear problem. In section 3, an alternative error estimation is proposed without a priori regularity assumptions on the exact solution. Time-stepping schemes based on a backward Euler convolution quadrature method are analyzed in section 4. Applications are presented in section 5. The mixed form of problem (1.1) is considered in section 6 and related convergence rates are obtained. Finally, numerical results are provided to validate the theoretical findings.

Throughout the paper, we denote by c a constant which may vary at different occurrences, but is always independent of the mesh size h and the time step size τ. We shall also use the abbreviation f(u) and f(t) for f(x,t,u) and f(x,t), respectively.

For the purpose of approximating the solution of this problem, let Vh⊂L2(Ω) be a family of finite-dimensional spaces that depends on h, 0<h<1. We assume that we are given a corresponding family of linear operators Th:L2(Ω)→Vh which approximate T. Then consider the semidiscrete problem: find uh(t)∈Vh for t≥0 such that

where u0h is a suitably chosen approximation of u0. In our analysis, we shall make the following assumptions: (i) Th is selfadjoint, positive semidefinite on L2(Ω) and positive definite on Vh. (ii) ThPh=Th, where Ph:L2(Ω)→Vh is the orthogonal L2-projection onto Vh. (iii) For some constants γ>0 and c>0, there holds

Since T−1h exists on Vh, (2.2) may be solved uniquely for t>0. The following diagram displays the different links between the operators under consideration:

In the diagram, the operator Rh:D(L)→Vh is defined by Rh=ThL. It is the analogue of the Ritz elliptic projection in the context of Galerkin FE methods. Note that RhT=Th, and in view of (2.3), Rh satisfies

Further, by the definition of Ph, we see that ∥Phv−v∥≤∥Rhv−v∥∀v∈D(L).

Before proving the main result of this section, we recall the following lemma which generalizes the classical Gronwall’s inequality, see [6].

Assume that y is a nonnegative function in L1(0,T0) which satisfies

and c is independent of h.

Clearly the error estimate in Lemma 2.2 is meaningful provided that G∈L1(0,T). Recalling that ρ=(Th−T)Lu, we have by (2.3), ∥∂tρ(t)∥≤chγ∥L∂tu(t)∥. Hence, to achieve a O(hγ) order of convergence, we need to assume that ∂tu(t)∈D(L) for t∈(0,T0]. It turns out that, without additional conditions on initial data and nonlinearity, this property, which holds in the linear case, does not generalize to the semilinear problem. This remark equally applies to the semilinear parabalic problem, see the discussion in [31, pp. 228].

We shall present below an alternative derivation of the error bound without a priori regularity assumptions on the exact solution. To do so, we first introduce the operator

Then Sh satisfies the following property.

Using the identity (2.6), we verify that

Similarly, based on (3.1), the following estimate

holds for Fh(t). Now we are ready to prove a nonsmooth data error estimate. Here and the throughout the paper, ℓh(ν)=|lnh| if ν=0 and 1 otherwise.

The desired estimate follows now by applying Lemma 2.1. To establish the estimate for ν=0, we follow the same arguments presented in the proof of Theorem 4.4 in [1]. ∎

As an immediate application of Theorem 3.1, consider the standard conforming Galerkin FEM with Vh⊂H10(Ω) consists of piecewise linear functions on a shape-regular triangulation with a mesh parameter h. Let Th:L2(Ω)→Vh be the solution operator of the discrete problem:

where a(⋅,⋅) is the bilinear form associated with the elliptic operator L. Then, Th is selfadjoint, positive semidefinite on L2(Ω) and positive definite on Vh, see [3], and satisfies (2.3) with γ=2. Thus, by Theorem 3.1,

for ν∈[0,1]. This improves the following estimate

established in [1]. We notice that the logarithmic factor is also present in the parabolic case when ν=0, see [14, Theorem 1.1].

As a second example, we show that the present semidiscrete error analysis extends to the following multi-term time-fractional diffusion problem:

where the multi-term differential operator P(∂t) is defined by P(∂t)=∂αt+∑mi=1bi∂αit with 0<αm≤⋯≤α1≤α<1 being the orders of the fractional Caputo derivatives, and bi>0, i=1,…,m. This model was derived to improve the modeling accuracy of the single-term model (1.1) for describing anomalous diffusion. An inspection of the proof of the Theorem 3.1 reveals that its main arguments are based on the bounds derived for the operators Fh, ¯Eh and ¯Fh. Following [11], one can verify that these operators satisfy the same bounds as in the single-term case. This readily implies that the estimate (3.4) remains valid for the multi-term diffusion problem (3.10).

In the parabolic case, a singularity in time appears which has the same form as in (3.2). Hence, the estimate (3.4) remains valid when α=1.

For smooth initial data u0∈D(L), the estimate (3.4) still holds for the choice u0h=Rhu0. Indeed, we have

By the stability of the operator Eh(t),

Then we reach our conclusion by following the arguments in the proof of Theorem 3.1.

This section is devoted to the analysis of a fully discrete scheme for problem (2.2) based on a convolution quadrature (CQ) generated by the backward Euler method, using the framework developed in [25, 5]. Divide the time interval [0,T0] into N equal subintervals with a time step size τ=T0/N, and let tj=jτ. The convolution quadrature [23] refers to an approximation of any function of the form k∗φ as

where the weights βj=βj(τ) are computed from the Laplace transform K(z) of k rather than the kernel k(t). With ∂t being time differentiation, define K(∂t) as the operator of (distributional) convolution with the kernel k: K(∂t)φ=k∗φ for a function φ(t) with suitable smoothness. Then a convolution quadrature will approximate K(∂t)φ by a discrete convolution K(∂τ)φ at t=tn as K(∂τ)φ(tn)=∑nj=0βn−j(τ)φ(tj), where the quadrature weights {βj(τ)}∞j=0 are determined by the generating power series ∑∞j=0βj(τ)ξj=K(δ(ξ)/τ) with δ(ξ) being a rational function, chosen as the quotient of the generating polynomials of a stable and consistent linear multistep method. For the backward Euler method, δ(ξ)=1−ξ.

In the following lemma, we state an interesting result on the error of the convolution quadrature [24, Theorem 5.2].

for some real μ and c. Then, for φ(t)=ctσ−1, the convolution quadrature based on the backward Euler method satisfies

Upon using the relation between the Riemann-Liouville derivative denoted by ∂αt and the Caputo derivative C∂αt, the semidiscrete scheme (2.2) can be rewritten as

Thus, the proposed backward Euler CQ scheme is to seek Unh∈Vh, n≥0, such that

The fully discrete solution Unh∈Vh is defined by

Then we establish the following result.

We first notice that ∥uh(tn)−u(tn)∥≤ct−α(1−ν)nhγ∥Lνu0∥, which follows from Theorem 3.1 in the case f=0. In order to estimate ∥Unh−uh(tn)∥, apply ∂−αt and ∂−ατ to (4.6) and (4.7), respectively, use the associativity of convolution and the property ThPh=Th, to deduce that