The recent rapid development of artificial intelligence (AI, mainly driven by machine learning research, especially deep learning) has achieved phenomenal success in various applications. However, to further apply AI technologies in real-world context, several significant issues regarding the AI ecosystem should be addressed. We identify the main issues as data privacy, ownership, and exchange, which are difficult to be solved with the current centralized paradigm of machine learning training methodology. As a result, we propose a novel model training paradigm based on blockchain, named Galaxy Learning, which aims to train a model with distributed data and to reserve the data ownership for their owners. In this new paradigm, encrypted models are moved around instead, and are federated once trained. Model training, as well as the communication, is achieved with blockchain and its smart contracts. Pricing of training data is determined by its contribution, and therefore it is not about the exchange of data ownership. In this position paper, we describe the motivation, paradigm, design, and challenges as well as opportunities of Galaxy Learning. 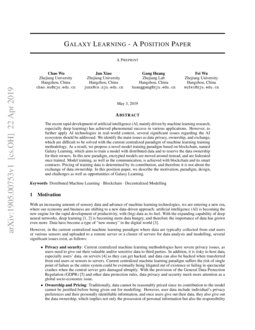 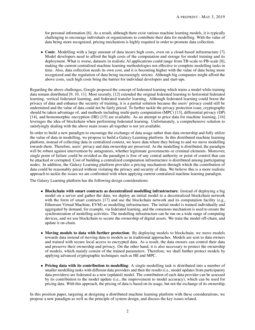 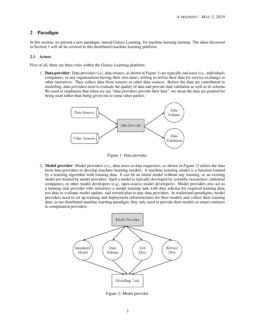 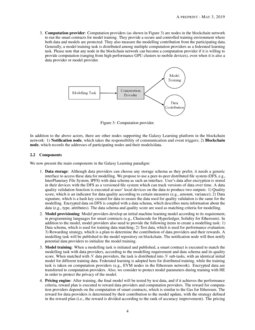 Towards an Enterprise-Ready Implementation of Artificial Intelligence-Enabled, Blockchain-Based Smart Contracts

Towards a Simulation-Based Programming Paradigm for AI applications

We present initial ideas for a programming paradigm based on simulation ...
Jörg Pührer, et al. ∙

In the era of the Internet of information, we have gone through layering...
F. Richard Yu, et al. ∙

With an increasing amount of sensory data and advance of machine learning technologies, we are entering a new era, where our economy and business are shifting to a new data-driven approach: artificial intelligence (AI) is becoming the new engine for the rapid development of productivity, with (big) data as its fuel. With the expanding capability of deep neural networks, deep learning

[1, 2] is becoming more data hungry, and therefore the importance of data has grown even more. Data have become a type of “new money” in the digital world [3].

However, in the current centralized machine learning paradigm where data are typically collected from end users or various sensors and uploaded to a remote server or a cluster of servers for data analysis and modelling, several significant issues exist, as follows:

Regarding the above challenges, Google proposed the concept of federated learning which trains a model while training data remain distributed [9, 10, 11]. Most recently, [12]

[13], differential privacy (DP) [14], and homomorphic encryption (HE) [15] are available. As an attempt to price data for machine learning, [16] leverages the idea of blockchain when performing federated learning. Unfortunately, a comprehensive solution to satisfyingly dealing with the above main issues all together is not yet available.

In order to build a new paradigm to encourage the exchange of data usage rather than data ownership and fully utilize the value of data in modelling, we propose to build a Galaxy Learning platform. In this distributed machine learning platform, instead of collecting data in centralized context, we leave data where they belong to and we move modelling towards them. Therefore, users’ privacy and data ownership are preserved. As the modelling is distributed, the paradigm will be robust against intervention by antagonists, whether legitimate governments or criminal elements. Moreover, single point of failure could be avoided as the paradigm is free of any central authority or point of control that can be attacked or corrupted. Cost of building a centralized computation infrastructure is distributed among participating nodes. In addition, the Galaxy Learning platform provides a pricing mechanism through which the contribution of data could be reasonably priced without violating the privacy and security of data. We believe this is a more realistic approach to tackle the issues we are confronted with when applying current centralized machine learning paradigm.

The Galaxy Learning platform has the following design considerations:

In this position paper, targeting at designing a distributed machine learning platform with these considerations, we propose a new paradigm as well as the principle of system design, and discuss the key issues related.

In this section, we present a new paradigm, named Galaxy Learning, for machine learning training. The ideas discussed in Section 1 will all be covered in this distributed machine learning platform.

First of all, there are three roles within the Galaxy Learning platform:

In addition to the above actors, there are other nodes supporting the Galaxy Learning platform in the blockchain network: 1) Notification node, which takes the responsibility of communication and event triggers; 2) Blockchain node, which records the addresses of participating nodes and their models/data.

We now present the main components in the Galaxy Learning paradigm:

In this section we describe a reference design of the Galaxy Learning platform on Ethereum [17], which is a popular blockchain network that enables developers to build and deploy distributed applications. The whole workflow of the system is illustrated in Figure 4, and all tokens used within the workflow are transferred according to smart contracts. Whisper111Ethereum Whisper: https://github.com/ethereum/wiki/wiki/Whisper, which provides dark (plausible denial over perfect network traffic analysis) communications to two correspondents that know nothing of each other but a hash, is used to signal to each other in order to ultimately collaborate between nodes.

Data pre-processing is performed offline locally by data providers. There are several sub-steps involved in this step:

The following sub-steps are executed in sequence, and the training process will be repeated until the global model is converged:

When the above federated learning process ends, the model provider calculates the contribution of each data provider and distributes the tokens in reward pool to these providers. The tokens in reward pool will also be distributed to computation providers, and this part of reward depends on the computation of smart contracts, which is similar to the Gas for Ethereum. In addition, all the HE-encrypted results will be visible to all participating parties, and the correctness of reward distribution can be verified off the chain.

We have provided the paradigm and design of the proposed Galaxy Learning platform. The fast development of machine learning, blockchain and cryptography opens up great opportunities for us, whereas the high complexity of the proposed platform poses great challenges. To successfully establish such a new AI ecosystem, we discuss several challenges and opportunities regarding the Galaxy Learning platform in this section.

At last, we need to mention that the proposed new paradigm of distributed machine learning is capable to couple with traditional centralized paradigm: a model can be initially trained in a centralized manner and then further trained in the distributed context. For example, a company can firstly train a basic classifier with its own data; while in traditional paradigm it will be difficult to further collect and feed external data to the classifier, now the company can distribute the (encrypted) model to the Galaxy Learning platform and gain a refined model with the data previously unavailable.