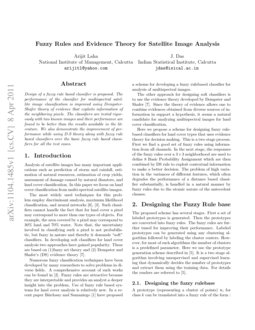 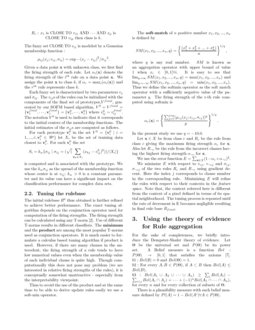 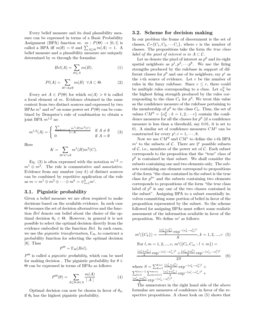 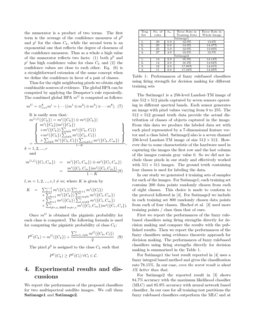 Quantifying the Uncertainty of Precision Estimates for Rule based Text Classifiers

Rule based classifiers that use the presence and absence of key sub-stri...
James Nutaro, et al. ∙

In this paper an algorithm for recognizing speech has been proposed. The...
Hesam Ekhtiyar, et al. ∙

[6], [3]. Such classifiers cannot handle the fact that for land cover a pixel may correspond to more than one types of objects. For example, the area covered by a pixel may correspond to 30% land and 70% water. Note that, the uncertainty involved in classifying such a pixel is not probabilistic, but fuzzy in nature and thereby it demands “soft” classifiers. In developing soft classifiers for land cover analysis two approaches have gained popularity. These are based on (1)fuzzy set theory and (2) Dempster and Shafer’s (DS) evidence theory [7].

Numerous fuzzy classification techniques have been developed by many researchers to solve problems in diverse fields. A comprehensive account of such works can be found in [2]

. Fuzzy rules are attractive because they are interpretable and provides an analyst a deeper insight into the problem. Use of fuzzy rule based systems for land cover analysis is relatively new. In a recent paper Bárdossy and Samaniego

[1] have proposed a scheme for developing a fuzzy rulebased classifier for analysis of multispectral images.

The other approach for designing soft classifiers is to use the evidence theory developed by Dempster and Shafer [7]. Since the theory of evidence allows one to combine evidences obtained from diverse sources of information in support a hypothesis, it seems a natural candidate for analyzing multispectral images for land cover classification.

Here we propose a scheme for designing fuzzy rulebased classifiers for land cover types that uses evidence theory for decision making. This is a two stage process. First we find a good set of fuzzy rules using information from all channels. In the next stage, the responses of the fuzzy rules over a 3×3

neighborhood are used to define 8 Basic Probability Assignment which are then combined by DS rule to exploit contextual information to make a better decision. The problem of high variation in the variances of different features, which often degrades the performance of a distance based classifier substantially, is handled in a natural manner by fuzzy rules due to the atomic nature of the antecedent clauses.

2 .  Designing the Fuzzy Rule base

The proposed scheme has several stages. First a set of labeled prototypes is generated. Then the prototypes are converted into fuzzy rules. The fuzzy rules are further tuned for improving their performance. Labeled prototypes can be generated using any clustering algorithm followed by labeling the cluster centers. However, for most of such algorithms the number of clusters is a predefined parameter. Here we use the prototype generation scheme described in [5]

. It is a two stage algorithm involving unsupervised and supervised learning that dynamically decides the number of prototypes and extract them using the training data. For details the readers are referred to

A prototype (representing a cluster of points) vi for class k can be translated into a fuzzy rule of the form :

The fuzzy set CLOSE TO vij is modeled by a Gaussian membership function :

Each fuzzy set is characterized by two parameters vj and σij. The vijs of the rules can be initialized with the components of the final set of prototypes,Vfinal, generated by our SOFM based algorithm, V0=Vfinal={vfinal1,⋯,vfinal^c} ={v01,⋯,v0^c} where v0ij=vfinalij. The notation V0 is used to indicate that it corresponds to the initial centers of the membership functions. The initial estimates of the σijs are computed as follows.

is computed and is associated with the prototype. We use the kwσij as the spread of the membership function whose center is at vij; kw>0 is a constant parameter and its value can have a significant impact on the classification performance for complex data sets.

The initial rulebase R0 thus obtained is further refined to achieve better performance. The exact tuning algorithm depends on the conjunction operator used for computation of the firing strengths. The firing strength can be calculated using any T-norm [2]. Use of different T-norms results in different classifiers. The minimum and the product are among the most popular T-norms used as conjunction operators. It is much easier to formulate a calculus based tuning algorithm if product is used. However, if there are many clauses in the antecedent, the firing strength of a rule tends to have low numerical values even when the membership value of each individual clause is quite high. Though computationally this does not pose any problem (we are interested in relative firing strengths of the rules), it is conceptually somewhat unattractive - especially from the interpretability viewpoint.

Thus to avoid the use of the product and at the same time to be able to derive update rules easily we use a soft-min operator.

The soft-match of n positive number x1,x2,...,xn is defined by

We minimize E with respect to vcj, v¬cj and σcj, σ¬cj of the two rules Rc and R¬c using gradient decent. Here the index j corresponds to clause number in the corresponding rule. Minimizing E will refine the rules with respect to their contexts in the feature space. Note that, the context referred here is different from the context of a pixel defined in terms of its spatial neighborhood. The tuning process is repeated until the rate of decrement in E becomes negligible resulting in final rule base Rfinal.

3 .  Using the theory of evidence for Rule aggregation

There is a plausibility measure with each belief measure defined by Pl(A)=1−Bel(Ac)∀A∈P(Θ).

Every set A∈P(Θ) for which m(A)>0 is called a focal element of m. Evidence obtained in the same context from two distinct sources and expressed by two BPAs m1 and m2 on some power set P(Θ) can be combined by Dempster’s rule of combination to obtain a joint BPA m1,2 as:

Eq. (3) is often expressed with the notation m1,2=m1⊕m2. The rule is commutative and associative. Evidence from any number (say k) of distinct sources can be combined by repetitive application of the rule as m=m1⊕m2⊕⋯⊕mk=⊕ki=1mi.

Optimal decision can now be chosen in favor of θ0, if θ0 has the highest pignistic probability.

In our problem the frame of discernment is the set of classes, C={C1,C2,⋯Cc}, where c is the number of classes. The propositions take the form the true class label of the pixel of interest is in A⊂C.

Let us denote the pixel of interest as p0 and its eight spatial neighbors as p1,p2,⋯p8. We use the firing strengths produced by the rulebase in support of different classes for p0 and one of its neighbors, say pi as the i-th source of evidence. Let r be the number of rules in the fuzzy rulebase. Since c≤r, there could be multiple rules corresponding to a class. Let α0k be the highest firing strength produced by the rules corresponding to the class Ck for p0. We treat this value as the confidence measure of the rulebase pertaining to the membership of p0 to the class Ck. Thus, the set of values CM0={α0k:k=1,2,⋯c} contain the confidence measures for all the classes for p0 (if a confidence measure is less than a threshold, say 0.01, it is set to 0). A similar set of confidence measures CMi can be constructed for every pi;i=1,⋯,8.

Thus for the eight neighboring pixels we obtain eight combinable sources of evidence. The global BPA can be computed by applying the Dempster’s rule repeatedly. The combined global BPA mG is computed as follows:

It is easily seen that:

The pixel p0 is assigned to the class Ck such that

We report the performances of the proposed classifiers for two multispectral satellite images. We call them Satimage1 and Satimage2.

The Satimage1 is a 256-level Landsat-TM image of size 512×512 pixels captured by seven sensors operating in different spectral bands. Each sensor generates an image with pixel values varying from 0 to 255. The 512×512

ground truth data provide the actual distribution of classes of objects captured in the image. From this data we produce the labeled data set with each pixel represented by a 7-dimensional feature vector and a class label. Satimage2 also is a seven channel 256-level Landsat-TM image of size

512×512. However due to some characteristic of the hardware used in capturing the images the first row and the last column of the images contain gray value 0. So we did not include those pixels in our study and effectively worked with 511×511 images. The ground truth containing four classes is used for labeling the data.

For Satimage1 the best result reported in [4] uses a fuzzy integral based method and gives the classification rate 78.15%. In our case, even the worst result is about 5% better than that.

Tables 2 summarizes the performances of the fuzzy rulebased classifiers using evidence theoretic approach. We used the same set of fuzzy rules as used previously, but the rule outputs are aggregated using the evidence theory.

Comparison of Table 2 with Table 1 clearly shows that in every case there is a consistent improvement in the classification performance. In case of Satimage1 the improvements varied between 1.1% and 1.5% and the best performing classifier (for training set 4) achieves error rate as low as 11.03%. For Satimage2 also the improvement varied between 1.4% and 1.7%. So the overall improvement for Satimage1 over the existing methods is more than 7%. For Satimage2 also we achieved consistent improvements using training sets of smaller size. For applications like crop yield estimation even a small improvement will have a significant impact on the overall estimate.

We proposed two classifiers: one is fuzzy rule based and the other integrates outputs of fuzzy rules using theory of evidence. Fuzzy rules are extracted with the help SOFM. The system automatically decides on the number of rules.

The fuzzy rule based classifier is of general nature and can be applied in any classification problem, while the evidence theoretic classifier exploits the spatial information available for an image to make the classification decision.

In the evidence theoretic framework we use the pixel under consideration and one of its neighbors to provide a body of evidence in support of different propositions regarding the class membership (to a particular class as well as a pair of classes) of the pixel. The BPAs for the propositions are calculated from the mutual confidences of the pixels in support of respective propositions. Eight bodies of evidence is obtained for eight neighbors of the pixel. Now the evidences are combined to obtain a global body of evidence. Then pignistic probability for each class is computed and the pixel is assigned to the class with highest pignistic probability. The proposed system demonstrates a consistent improvement in performance.

Acknowledgement: Authors thank Prof. N. R. Pal for his continuous support and advices. They also thank Dr. A. S. Kumar and Dr. A. J. Pinz for allowing them to use the satellite images Satimage1 and Satimage2 respectively to test the proposed methods.