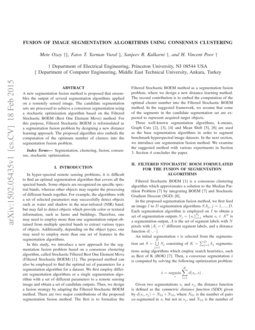 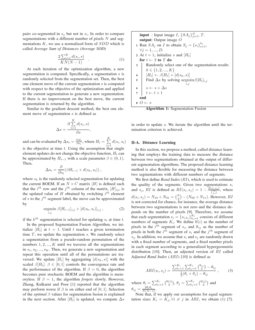 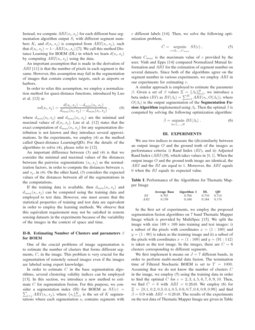 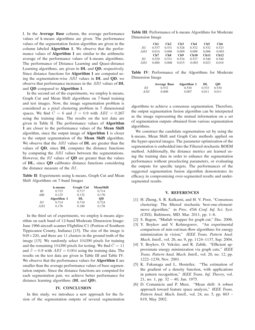 In hyper-spectral remote sensing problems, it is difficult to find an optimal segmentation algorithm that covers all the spectral bands. Some objects are recognized on specific spectral bands, whereas other objects may require the processing of different bands together. For example, the algorithms with a set of selected parameters may successfully detect objects such as water and shadow in the near-infrared (NIR) band, but may fail to detect objects which provide color or textural information, such as farms and buildings. Therefore, one may need to employ more than one segmentation output obtained from multiple spectral bands to extract various types of objects. Additionally, depending on the object types, one may need to employ more than one set of features in the segmentation algorithms.

[2, 3, 4] and Mean Shift [5, 6] are used as the base segmentation algorithms in order to segment benchmark hyperspectral image datasets. In the next section, we introduce our segmentation fusion method. We examine the suggested method with various experiments in Section 3. Section 4 concludes the paper.

segmentations using algorithms which employ search heuristics, such as Best of K

(BOK) [7]. Then, a consensus segmentation ^s is computed by solving the following optimization problem:

Similar to the gradient descent method, the best one element move of segmentation s is defined as

and can be evaluated by Δst=∂Ht∂st, where Ht=K∑i=1d(si,st) is the objective at time t. Using the assumption that single element updates do not change the objective function, Ht can be approximated by Ht−1 with a scale parameter β∈(0,1). Then,

where sk is the randomly selected segmentation for updating the current BOEM. If an N×C matrix [H] is defined such that the ith row and the jth column of the matrix, [H]ij, is the updated value of H obtained by switching ith element of s to the jth segment label, the move can be approximated by

if the kth segmentation is selected for updating st at time t.

In the proposed Segmentation Fusion Algorithm, we initialize [Ht] at t=1. Until t reaches a given termination time T, we update the segmentation s. We randomly select a segmentation from a pseudo-random permutation of the numbers 1,2,...,K until we traverse all the segmentations in s1,s2,...,sK. Then, we generate a new segmentation and repeat this operation until all of the permutations are traversed. We update [Ht] by aggregating [d(sk,s)] with the scaled β[Ht]. β∈[0,1] controls the convergence rate and the performance of the algorithm. If β=0, the algorithm becomes pure stochastic BOEM and the algorithm is memoryless. If β=1, the algorithm forgets slowly. However, Zheng, Kulkarni and Poor [1] reported that the algorithm may perform worse if β is on either end of [0,1]. Selection of the optimal β values for segmentation fusion is explained in the next section. After [Ht] is updated, we compute Δs in order to update s. We iterate the algorithm until the termination criterion is achieved.

), which is used to estimate the quality of the segments. Given two segmentations

Note that, if we apply our assumptions for equal segmentation sizes Ki=Kj,∀i≠j in ARI, we obtain (1) [7]. Instead, we compute ARI(si,sj) for each different base segmentation algorithm output Si with different segment numbers Ki and d(si,sj) is computed from ARI(si,sj), such that d(si,sj)=1−ARI(si,sj) [7]. We call this method Distance Learning for BOEM (DL) in which we learn d(si,sj) by computing ARI(si,sj) using the data.

An important assumption that is made in the derivation of ARI [11] is that the number of pixels in each segment is the same. However, this assumption may fail in the segmentation of images that contain complex targets, such as airports or harbors.

In order to relax this assumption, we employ a normalization method for quasi-distance functions, introduced by Luo et al. [12] as

where dmin(si,sj) and dmax(si,sj) are the minimal and maximal values of d(si,sj). Luo et al. [12] states that the exact computation of dmax(si,sj) for any segmentation distribution is not known and they introduce several approximations. In the experiments, we employ (4) as the method called Quasi-distance Learning(QD). For the details of the algorithms to solve (4), please refer to [12].

If the training data is available, then dmin(si,sj) and dmax(si,sj) can be computed using the training data and employed to test data. However, one must assure that the statistical properties of training and test data are equivalent in order to employ the learning methods. We observe that this equivalent requirement may not be satisfied in remote sensing datasets in the experiments because of the variability of the images in the context of space and time.

Ii-B Estimating Number of Clusters and parameters β for BOEM

One of the crucial problems of image segmentation is to estimate the number of clusters that forms different segments, C, in the image. This problem is very crucial for the segmentation of remotely sensed images even if the images are labeled using expert knowledge.

In order to estimate C in the base segmentation algorithms, several clustering validity indices can be employed [13]. In this section, we introduce a new method to estimate C for segmentation fusion. For this purpose, we consider a segmentation index (SI) for BOEM as SI(c)=∑i<jARI(si,sj), where {si}Ki=1 is the set of K segmentations where each segmentation si contains segments with c different labels [14]. Then, we solve the following optimization problem,

where Cmax is the maximum value of c provided by the user. Vinh and Epps [14] compared Normalized Mutual Information and ARI for the estimation of segment number on several datasets. Since both of the algorithms agree on the segment number in various experiments, we employ ARI in our experiments for estimating c.

A similar approach is employed to estimate the parameter β. Given a set of β values Ξ={βb}Bb=1, we introduce a beta index (BI) as BI(βb)=∑Ki=1ARI(si,O(βb)), where O(βb) is the output segmentation of the Segmentation Fusion Algorithm implemented using βb. Then the optimal ^β is computed by solving the following optimization algorithm:

We use two indices to measure the (dis)similarity between an output image O and the ground truth of the images as performance criteria: i) Rand Index (RI), and ii) Adjusted Rand Index (ARI) [9], which takes values in [0,1]. When the output image O and the ground truth image are identical, the ARI and the RI are equal to 1. Moreover, the ARI equals 0 when the RI equals its expected value.

In the second set of the experiments, we employ k-means, Graph Cut and Mean Shift algorithms on 7-band training and test images. Now, the image segmentation problem is considered as a pixel clustering problem in 7 dimensional spaces. We find ^C=6 and ^β=0.9 with ARI=0.267 using the training data. The results on the test data are given in Table II. The performance values of Algorithm 1 are closer to the performance values of the Mean Shift algorithm, since the output image of Algorithm 1 is closer to the output segmentation of the Mean Shift algorithm. We observe that the ARI values of DL are greater than the values of QD, since DL computes the distance functions by computing the ARI values between the segmentations. However, the RI values of QD are greater than the values of DL, since QD calibrates distance functions considering the distance measure of the RI.

In the third set of experiments, we employ k-means algorithm on each band of 12-band Moderate Dimension Image: June 1966 aircraft scanner Flightline C1 (Portion of Southern Tippecanoe County, Indiana) [15]. The size of the image is 949×220, and there are 11 clusters in the ground truth of the image [15]. We randomly select 104390 pixels for training and the remaining 104390 pixels for testing. We find ^C=11 and ^β=0.9 with ARI=0.004 using the training data. The results on the test data are given in Table III and Table IV. We observe that the performance values for Algorithm 1 are smaller than the average performance values of base segmentation outputs. Since the distance functions are computed for each segmentation pair, we achieve better performance for distance learning algorithms (DL and QD).

We construct the candidate segmentation set by using the k-means, Mean Shift and Graph Cuts methods applied on the hyper-spectral images. The parameter optimization of the segmentation is embedded into the Filtered stochastic BOEM method. Additionally, the distance metrics are learned using the training data in order to enhance the segmentation performance without preselecting parameters, or evaluating the outputs for specific targets. The performances of the suggested segmentation fusion algorithm demonstrates its efficacy in compromising over-segmented results and under-segmented results.