In the emerging commercial space industry there is a drastic increase in access to low cost satellite imagery. The price for satellite images depends on the sensor quality and revisit rate. This work proposes to bridge the gap between image quality and the price by improving the image quality via super-resolution (SR). Recently, a number of deep SR techniques have been proposed to enhance satellite images. However, none of these methods utilize the region-level context information, giving equal importance to each region in the image. This, along with the fact that most state-of-the-art SR methods are complex and cumbersome deep models, the time taken to process very large satellite images can be impractically high. We, propose to handle this challenge by designing an SR framework that analyzes the regional information content on each patch of the low-resolution image and judiciously chooses to use more computationally complex deep models to super-resolve more structure-rich regions on the image, while using less resource-intensive non-deep methods on non-salient regions. Through extensive experiments on a large satellite image, we show substantial decrease in inference time while achieving similar performance to that of existing deep SR methods over several evaluation measures like PSNR, MSE and SSIM. 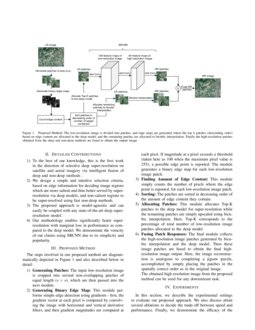 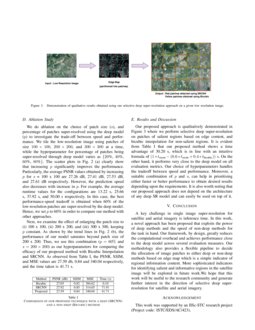 Satellites images are used to observe the earth’s surface from outer space in order to provide rich visual information. Such information is often useful in many important real-world applications, such as natural disaster warning [1], exploration of resource [8], land cover classification [6, 4, 3, 17], weather/environment monitoring and many more. However, often the quality and resolution of these satellite images are affected due to the limitations in the imaging equipment, the space to ground station communication bandwidth, transmission noise etc. [10]. The acquired low resolution (LR) images, resulting from the aforementioned hardware limitations, may not be suitable for the downstream analytics tasks such as object detection and fine grained classification, precision mapping and measurement etc. To overcome such challenges, super-resolution (SR) techniques are used towards improving the spatial resolution of the collected images [13, 9, 10, 15].

Deep learning has been successfully applied to various vision tasks including object recognition, detection, action recognition, image/video analytics and processing, optical flow estimation, image captioning, etc. Deep learning approach is a data dependent approach, where a large amount of image data along with the ground truth information is used for training a neural network with many parameters. The design of the network architecture plays a crucial role in obtaining better results. Many SR techniques that use deep learning have been proposed for general/natural images. For example, SRCNN [2]

performs end-to-end learning from low resolution to high-resolution images via fully convolutional network. The method uses a bi-cubic interpolation as its pre-processing step followed by the extraction of overlapping patches, via convolution, as high dimensional vectors with as many feature maps as their dimensions. The vectors are then non-linearly mapped to each other and subsequently aggregated in the form of patches to get the reconstructed SR image that is supposed to be as close to the ground truth as possible. Another method, VDSR

[12], the final convolutional layer predicts r2 channels corresponding to each pixel of low resolution image. This approach is simple and quite powerful for super-resolving.

Most of the aforementioned super-resolution approaches do not rely on context information and treat all regions equally, whereas in satellite images, the context plays a crucial role in determining the objects, which usually occupy a tiny region (for example, the object floating on a large water body is most likely a ship or boat). Since the satellite images are huge in size, it is a good candidate for super-resolving only for salient object regions. This would ensure that the images are processed quickly despite their large size. Leveraging this, we propose a novel approach where we utilize the deep SR models only on high frequency regions which are more informative whereas fast non-deep methods like Bicubic interpolation are used to super-resolve on the low frequency regions.

The rest of the paper is organized as follows: section 2 list out the major contributions of this work, section 3 discusses the proposed framework in detail, section 4 demonstrates the empirical evaluation and discussion on the results, and section 5 finally concludes the paper.

The steps involved in our proposed method are diagrammatically depicted in Figure 1 and also described below in detail:

In this section, we describe the experimental settings to evaluate our proposed approach. We also discuss about several ablations to decide the trade-off between speed and performance. Finally, we demonstrate the efficacy of the proposed method by achieving performance similar to deep model like SRCNN with significant drop in run time.

. Further, the Adam optimizer was used with a learning rate of 0.0003 for all layers, and the MSE loss function was evaluated only by the difference between the central pixels of the input image and the network output. The training was done on 91 images for 200 epochs, with an upscaling factor of 2, and the convolutional layers were trained without padding in order to avoid any border effects. Although a fixed image size was used in training, the SRCNN input can be of arbitrary size at test time. We used the network weights from

For evaluating our method, we use “Mean-Squared Error” (MSE), “Peak Signal-to-Noise Ratio” (PSNR), and “Structural Similarity Index” (SSIM). We use the same evaluation protocol as mentioned in

[2] and the average results over 10 observations are reported. Given an image (Y) of size M×N and a reference image (X) of the same size, each pixel of X and Y is denoted by x and y respectively.

Mean-Squared Error: MSE measures the quality of Y by averaging the squared difference between its pixel values and that of X. It is always non-negative and lower values are better. A common problem with MSE is that it strongly depends on the intensity scaling of the image.

Peak Signal-to-Noise Ratio: PSNR [5] builds over the MSE by scaling it according to the image range. A higher PSNR value denotes a higher quality image, and vice versa. For 8-bit images:

Structural Similarity Index: SSIM, developed by Wang et al.[16], is obtained by modelling an image distortion as a combination of three factors, namely, loss of correlation, contrast distortion, and luminance distortion. The commonly-used, specific form of SSIM is reduced to:

is the variance of X,

We do ablation on the choice of patch size (s), and percentage of patches super-resolved using the deep model (p) to investigate the trade-off between speed and performance. We tile the low-resolution image using patches of size 100×100, 200×200, and 300×300

at a time, while the hyperparameter for percentage of patches being super-resolved through deep model varies as {

Our proposed approach is qualitatively demonstrated in Figure 3 where we perform selective deep super-resolution on patches of salient regions based on edge content, and bicubic interpolation for non-salient regions. It is evident from Table I that our proposed method shows a time advantage of 30.20 s, which is in line with an intuitive formula of (1∗t\textsubscriptsrcnn−(0.6∗t\textsubscriptsrcnn+0.4∗t\textsubscriptbicubic)) s. On the other hand, it performs very close to the deep model on all evaluation metrics. Our choice of hyperparameters handles the tradeoff between speed and performance. Moreover, a suitable combination of p and s, can help in prioritising either faster or better performance to obtain desired results depending upon the requirements. It is also worth noting that our proposed approach does not depend on the architecture of any deep SR model and can easily be used on top of it.

A key challenge in single image super-resolution for satellite and aerial imagery is inference time. In this work, a novel approach has been proposed that exploits the power of deep methods and the speed of non-deep methods for the task in hand. Our framework, by design, greatly reduces the computational overhead and achieves performance close to the deep model across several evaluation measures. Our methodology also provides a flexible pipeline to decide the allocation of image patches to either deep or non-deep methods based on edge map which is a simple indicator of regional information content. More sophisticated indicators for identifying salient and informative regions in the satellite image will be explored in future work.We hope that this work will be useful to the research community and generate further interest in the direction of selective deep super-resolution for satellite and aerial imagery.

This work was supported by an IISc-STC research project (Project code: ISTC/EDS/AC/423).