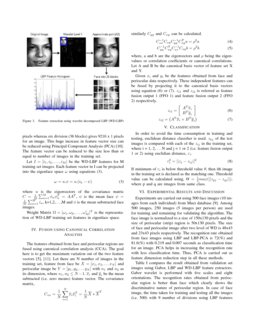 Face recognition is an active research for past four decades. Still there are unaddressed challenges put forth infront of researchers. Face recognition has its wide application in security, surveillance and authentication fields. Unlike iris and fingerprint recognition, face recognition does not require user cooperation. Faster development in technologies is also resulted in hacking, filching and other fraudulent activities. Plastic surgery and spoofing (photo attack) are the two new hurdles, allowing fugitives to roam freely without any fear about the face recognition system. Facial aging is another issue which affects accuracy as well as performance of face recognition. Some of these challenges can be addressed by using dual information from different biometrics system.

Periocular (a region surrounding eyes), is considered as most discriminative in nature [1]. This biometrics faces problem in presence of head angle or pose variations, spectacles, hair and facial expression [2]. Thus the periocular biometrics cannot serve as an individual biometrics [3]. Fusing periocular region data with other biometrics may help in increasing total recognition rate. Obtaining dual information from a single source reduces the total system cost and data acquisition time to some extent. Fusing face and periocular biometrics obtained from same source is more attractive.

. CCA tries to find the maximum correlation between two feature set which helps in increasing the accuracy and precision. Feature extraction step plays an important role in CCA. Local Binary Pattern (LBP) is a well known feature extractor for both periocular and face images

[2, 6]. LBP on all wavelet sub-bands are used to resolve writer identification problem [7]. LBP provides rich texture features by considering more number of blocks in a given image. Increase in number of blocks also increases computational complexity and processing time. This is overcome by performing LBP only on approximate part of the wavelet decomposed image [8]. Further to reduce the size of feature, Principle Component Analysis (PCA) is used. Slight variation on lighting condition causes huge variation in PCA results. Calculating principle component on extracted feature instead on direct intensity value helps in increasing the results. Thus this paper proposes, wavelet decomposed LBP (WD-LBP) based multimodal biometrics from face and periocular images fusion using CCA. Muct face database [9] is used for evaluating the performance of proposed methods, since it has multi-ethnic face images with other variations such as illumination, pose, expression and occlusion.

Local binary pattern (LBP) extracts local information by generating a pattern using binary values in a particular region. In order to increase the strength of feature set, an image is divided into number of blocks. LBP performs better with increased number of blocks on larger size image. This also increases the computational complexity as well as processing time. It is always required to fetch as much information possible from a smaller size image. However, normalizing an image to much smaller size causes huge information loss. This paper illustrates two ways to overcome above said issues, 1) LBP is performed on the approximate part of wavelet decomposed image - aids in improving the accuracy with less number of blocks, 2) On the LBP extracted feature, PCA is performed for feature dimension reduction - which reduces computational complexity and processing time during classification. PCA also helps in making these local features invariant to noise. The recognition rate will also increase because the problem of PCA under illumination variation is eliminated by these features. Further to increase the accuracy, face and periocular biometrics is fused using canonical correlation analysis (CCA). Periocular is one of other discriminative features in face. Thus by fusing two biometrics data (i.e. face and periocular) obtained from the same source (high resolution face image) by finding maximum correlation may increase the total performance of the system. Block diagram of the proposed method is shown in figure 1. Periocular biometric can be performed in 3 different ways such as overlapping, Non-overlapping, Strip. These three regions can be obtained by taking four eye corner points [2]. This paper considers strip type without placing mask in the eye region assuming eyes are open in all the images. Two fusion outputs produced from CCA is analyzed separately for its performances.

Consider a 3x3 window with center pixel (xc,yc) intensity value be gc and local texture as T=t(gi) where gi(i=0,1,2,3,4,5,6,7) corresponds to the grey values of the 8 surrounding pixels. These surrounding pixels are thresholded with the center value gc as t(s(g0−gc),…,s(g7−gc)) and the function s(x) is defined as,

The LBP pattern at the center pixel gc can be obtained using equation (2). Figure 3 shows various steps involved in wavelet decomposed LBP feature extractor. In order to increase the feature strength and to get more details, the face images are divided into number of blocks. Face image with five number of divisions along row and column wise which results in total 25 blocks is shown in figure 3.

[10]. The feature vector can be reduced to the size less than or equal to number of images in the training set.

Let I=[i1,i2,…,iM] be the WD-LBP features for M training set images. Each feature vector in I can be projected into the eigenface space ω using equations (3).

is the eigenvectors of the covariance matric

The features obtained from face and periocular regions are fused using canonical correlation analysis (CCA). The goal here is to get the maximum variation out of the two feature vectors [5, 11]. Let there are N number of images in the training set, feature from face be X=[x1,x2,…xN] and periocular image be Y=[y1,y2,…yN] with n1 and n2 as its dimension, where n1,n2≤N−1. ¯¯¯xi and ¯¯¯yi be the mean subtracted (i.e. zero means) feature vector. The covariance matrix,

similarly Cyy and Cxy can be calculated.

where, a and b are the eigenvectors and ρ

being the eigenvalues or correlation coefficients or canonical correlations. Let A and B be the canonical basis vector of feature set X and Y.

In order to avoid the time consumption in training and testing, euclidean distance classifier is used.

If minimum of εi is below threshold value θ, then ith image in the training set is declared as the matching one. Threshold value can be calculated using, Θ=12max(||zpj−zqj||), where p and q are images from same class.

Experiments are carried out using 500 face images (10 images from each individual) from Muct database [9]. Among 500 images, 250 images (5 images per person) are used for training and remaining for validating the algorithm. The face image is normalized to a size of 150x130 pixels and the size of periocular (strip) region is 50x130 pixels. The size of face and periocular image after two level of WD is 48x43 and 23x43 pixels respectively. The recognition rate obtained from face images using LBP and LBP-PCA is 72(%) and 81.6(%) with 0.219 and 0.007 seconds as classification time for an image. PCA helps in increasing the recognition rate with less classification time. Thus, PCA is carried out as feature dimension reduction step in all these methods.

Table I compares the result obtained from validation set images using Gabor, LBP and WD-LBP feature extractors. Gabor wavelet is performed with five scales and eight orientations. The recognition rates obtained from periocular region is better than face which clearly shows the discriminative nature of periocular region. In case of face image, the time taken for training and testing all the images (i.e. 500) with 9 number of divisions using LBP features is 107 seconds and WD-LBP features is 91 seconds. The experiments are conducted with 4 GB RAM and 2.40 GHz speed personal computer using MATLAB 7.0 software. The results from LBP and WD-LBP are obtained with 12 and 9 number of divisions (along row and column wise) respectively. WD-LBP feature gives better results than LBP even with less number of divisions. This helps in attaining good recognition rate with less processing time.

Figure 4 shows the recognition rates obtained with different number of divisions along row and column wise using LBP and WD-LBP features. It is observed from the plot that feature fusion output 1 (FFO 1) performance is unacceptable whereas feature fusion output 2 (FFO 2) performs better using LBP features. Thus, the proposed WD-LBP features from face and periocular is fused only with FFO 2 method. Results from multimodal fusion with FFO 2 method is also given in table II for better understanding.

WD-LBP based multimodal fusion using CCA performs the best when compared to all other discussed methods. There is a peak in all WD-LBP method after which the recognition rate starts decreasing. When the number of divisions increases, the size of each block becomes too small. For example, after two levels of WD and with 12 number of division, the size of block is 4x3 pixels for face and 1x3 pixels for periocular. Performing LBP at this smaller size is meaningless. This forms the reason behind decrease in the recognition rate after a peak.