We consider an enlarged dimension reduction space in functional inverse regression. Our operator and functional analysis based approach facilitates a compact and rigorous formulation of the functional inverse regression problem. It also enables us to expand the possible space where the dimension reduction functions belong. Our formulation provides a unified framework so that the classical notions, such as covariance standardization, Mahalanobis distance, SIR and linear discriminant analysis, can be naturally and smoothly carried out in our enlarged space. This enlarged dimension reduction space also links to the linear discriminant space of Gaussian measures on a separable Hilbert space. 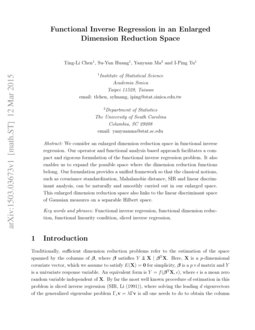 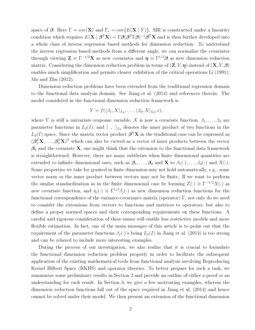 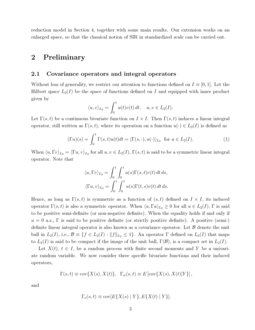 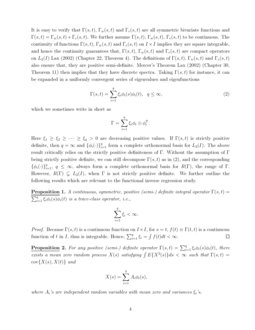 Traditionally, sufficient dimension reduction problems refer to the estimation of the space spanned by the columns of

-dimensional covariate vector, which we assume to satisfy

is a univariate response variable. An equivalent form is

is a mean zero random variable independent of

X. By far the most well known procedure of estimation in this problem is sliced inverse regression (SIR, Li (1991)), where solving the leading deigenvectors of the generalized eigenvalue problem Γev=λΓv is all one needs to do to obtain the column space of β. Here Γ=cov(X) and Γe=cov{E(X∣Y)}. SIR is constructed under a linearity condition which requires E(X∣βTX)=Γβ(βTΓβ)−1βTX and is then further developed into a whole class of inverse regression based methods for dimension reduction. To understand the inverse regression based methods from a different angle, we can normalize the covariates through viewing Z≡Γ−1/2X as new covariates and η≡Γ1/2β as new dimension reduction matrix. Considering the dimension reduction problem in terms of (Z,Y,η) instead of (X,Y,β) enables much simplification and permits clearer exhibition of the critical operations Li (1991); Ma and Zhu (2012).

where Y is still a univariate response variable, X is now a covariate function, β1,…,βd are parameter functions in L2(I), and ⟨,⟩L2 denotes the inner product of two functions in the L2(I) space. Since the matrix vector product βTX in the traditional case can be expressed as (βT1X,…,βTdX)T which can also be viewed as a vector of inner products between the vector βk and the covariate X, one might think that the extension to the functional data framework is straightforward. However, there are many subtleties when finite dimensional quantities are extended to infinite dimensional ones, such as β1,…,βd and X to β1(⋅),…,βd(⋅) and X(⋅). Some properties we take for granted in finite dimension may not hold automatically, e.g., some vector norm or the inner product between vectors may not be finite. If we want to perform the similar standardization as in the finite dimensional case by forming Z(⋅)≡Γ−1/2X(⋅) as new covariate function, and ηj(⋅)≡Γ1/2βj(⋅)

Γ, not only do we need to consider the extensions from vectors to functions and matrices to operators, but also to define a proper normed spaces and their corresponding requirements on these functions. A careful and rigorous consideration of these issues will enable less restrictive models and more flexible estimation. In fact, one of the main messages of this article is to point out that the requirement of the parameter functions βj(⋅)’s being L2(I) in Jiang et al. (2014) is too strong and can be relaxed to include more interesting examples.

During the process of our investigation, we also realize that it is crucial to formulate the functional dimension reduction problem properly in order to facilitate the subsequent application of the existing mathematical tools from functional analysis involving Reproducing Kernel Hilbert Space (RKHS) and operator theories. To better prepare for such a task, we summarize some preliminary results in Section 2 and provide an outline of either a proof or an understanding for each result. In Section 3, we give a few motivating examples, wherein the dimension reduction functions fall out of the space required in Jiang et al. (2014) and hence cannot be solved under their model. We then present an extension of the functional dimension reduction model in Section 4, together with some main results. Our extension works on an enlarged space, so that the classical notion of SIR in standardized scale can be carried out.

Let Γ(s,t) be a continuous bivariate function on I×I. Then Γ(s,t) induces a linear integral operator, still written as Γ(s,t), where its operation on a function u(⋅)∈L2(I) is defined as

When ⟨u,Γv⟩L2=⟨Γu,v⟩L2 for all u,v∈L2(I), Γ(s,t) is said to be a symmetric linear integral operator. Note that

Hence, as long as Γ(s,t) is symmetric as a function of (s,t) defined on I×I, its induced operator Γ(s,t) is also a symmetric operator. When ⟨u,Γu⟩L2≥0 for all u∈L2(I), Γ is said to be positive semi-definite (or non-negative definite). When the equality holds if and only if u=0 a.s., Γ is said to be positive definite (or strictly positive definite). A positive (semi-) definite linear integral operator is also known as a covariance operator. Let B denote the unit ball in L2(I), i.e., B≡{f∈L2(I):∥f∥L2≤1}. An operator Γ defined on L2(I) that maps to L2(I) is said to be compact if the image of the unit ball, Γ(B), is a compact set in L2(I).

, be a random process with finite second moments and

for instance, it can be expanded in a uniformly convergent series of eigenvalues and eigenfunctions

which we sometimes write in short as

where Ai’s are independent random variables with mean zero and variances ξi’s.

Note that, in our construction of the Gaussian process in the above proof, the sample path X(⋅|ω) may not be in L2(I) for a given realization ω. However, ∫E{X2(s)}ds<∞

ensures that the probability of this kinds of

Note that HΓ is a proper subset of L2(I). For f∈HΓ⊂L2(I), f has the expansion

Throughout our development of a rigorous framework for functional inverse regression, we set up a space,

which is the range space of the operator Γ−1/2 and is larger than L2(I). Below we give a few examples, wherein the dimension reduction functions fall out of L2(I) and reside in R(Γ−1/2). These examples motivate us to consider an enlarged space for functional dimension reduction. Interestingly, this enlarged space R(Γ−1/2) is the space considered by Grenander Grenander (1950) and Rao and Varadarajan Rao and Varadarajan (1963) in the study of linear discriminant analysis of Gaussian measures on a separable Hilbert space.

and the between-group covariance function as

have the same solution β given by

for any constant c.

The equality holds when bi∝1/iδ, which means

is the maximum eigenfunction. ∎

The dimension reduction function β(t) is obtained from solving the eigenvalue problem Γeβ=λΓβ. The corresponding optimal linear classification rule is via

This is an example that X∈L2(I), β∈R(Γ−1/2), but β∉L2(I), and the classification rule sign(⟨β,X⟩L2) is well-defined. This indicates that, to solve for a linear discriminant analysis problem in L2(I), we cannot restrict β to L2(I). We are obliged to enlarge the domain of β to R(Γ−1/2). On the other hand, requiring β∈R(Γ−1/2) is indeed sufficient for the purpose of linear discriminant analysis given in (5

) for classifying the observations into two groups.

We can easily verify that the within-group covariance function is

and the between-group covariance function is

Let Γ=Γw+Γe. Note that the forms of Γw(s,t) and Γe(s,t) here are exactly the same as those in Example 1. Thus, when we perform the functional sliced inverse regression by solving for the first eigenfunction,

we have exactly the same analysis as that in Example 1. It then leads to the same conclusion. That is, we are obliged to enlarge the domain of β to R(Γ−1/2). On the other hand, requiring β∈R(Γ−1/2) is also sufficient for our purpose of classifying the observations into k groups.

Finally we provide an example with continuous response variable Y. Let Y have mean zero and variance 1, and let

We can easily verify that the within-group covariance function is

The between-group covariance function is

Let Γ=Γw+Γe. Now the same analysis as that in Examples 1 and 2 leads to the conclusion that, regardless of how many slices one decides to use, β is in R(Γ−1/2).

In this section, we present our main results. First, we establish in Theorem 1 an interesting link between covariance operators on L2(I) and on HΓ. Next, we extend the functional dimension reduction to a relaxed model with enlarged space given in (10). The reproducing kernel Hilbert space HΓ, induced from the covariance operator Γ, defines a proper range space for the sliced mean (see Proposition 6 and Theorem 2(a) below). It also plays the parallel role as the span of X in finite dimension (see Proposition 6). Note that, HΓ is equipped with an inner product ⟨⋅,⋅⟩HΓ. Interestingly, this inner product refers to the standardization (see equation (3) above and equation (11) below) similar to the Mahalanobis distance and the standardization by the covariance matrix in finite vector case. We also study the linear design condition under the relaxed model in Proposition 7.

which yields the statement of the theorem. ∎

We are now in a position to revisit the functional dimension reduction problem studied in Jiang et al. (2014), describe the problem more rigorously and extend it. Let X(t), t∈I, be a stochastic process satisfying E∫X2(t)dt<∞. Denote its covariance function and spectrum by

Then, X can be expressed by an expansion as

where Ai’s are independent random variables with mean zero and variances ξi’s. Below we give a Proposition, which ensures that we can exchange the order of double integrals.

From Cauchy-Schwarz inequality, we have

Thus, with E∫|X(s)ϕi(s)|ds<∞, we can apply Fubini’s Theorem and get

Our proposed model is

Note that a critical difference of our formulation here from that in Jiang et al. (2014) is that, we only require β to be in R(Γ−1/2), which is larger than L2(I). This extension allows more flexibility in the dimension reduction functions.

Proposition 5 reveals an interesting result regarding the space where X belongs to. The finite second moment condition is commonly used in statistical analysis. In the finite dimensional case, a random vector with finite second moment can have arbitrary variation for each component of the random vector, hence the random vector can take values in the entire space. However, this is not the case in the infinite dimensional functional space. To ensure finite integrated variance, a random function cannot have arbitrary variation along each dimension. In fact, the variations along all dimensions, except a finite set of dimensions, have to degenerate sufficiently fast to guarantee finite total variant. In fact, the set of dimensions in which almost all variation accumulate is fixed for a single random function. As a consequence, the random function cannot take values everywhere in L2(I). This is why the resulting space of the random function X is in fact a much smaller subspace of L2(I). A feature of this subspace is that it ensures finite inner-product with elements in R(Γ−1/2), where Γ is the covariance function of X. We define this space as

Obviously R(Γ1/2)⊂R(Γ1/2)+⊂L2(I). We will encounter this space again when we present an equivalent linearity condition later in Section 4.3. Note that although a single random function X belongs to a much smaller space R(Γ1/2)+, the (uncountable) union of all such spaces of all random functions is the entire L2(I).

For any f∈R(Γ1/2), Proposition 5 ensures that the quantity ⟨Γ−1f,X⟩L2 is well-defined a.s. It is easy to verify the identity

In the classical SIR, the main problem can be viewed as solving the eigenvalue problem of Γe in the space scaled by Γ−1/2. Now in Functional Sliced Inverse Regression (FSIR), (11) indicates that Γ−1/2 can be again viewed as the scaled operator from L2(I) to HΓ.

In fact, the relaxed model leads to more flexible requirements on subsequent operators needed in the estimation procedure, which in turn leads to less stringent conditions on quantities such as mean covariates conditional on the response, etc. For example, in the FSIR approach, we would search for β from the functional eigenvalue problem