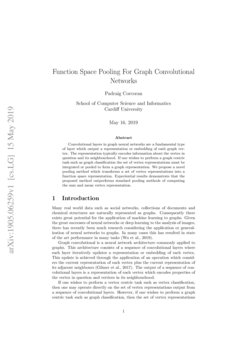 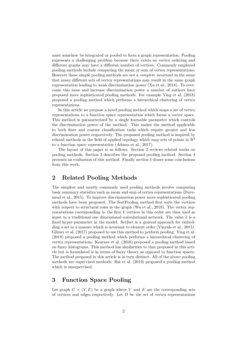 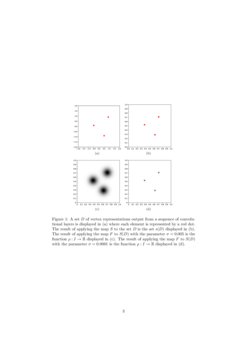 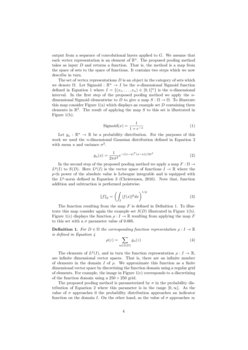 Many real world data such as social networks, collections of documents and chemical structures are naturally represented as graphs. Consequently there exists great potential for the application of machine learning to graphs. Given the great successes of neural networks or deep learning to the analysis of images, there has recently been much research considering the application or generalization of neural networks to graphs. In many cases this has resulted in state of the art performance in many tasks

proposed a pooling method which performs a hierarchical clustering of vertex representations.

In this article we propose a novel pooling method which maps a set of vertex representations to a function space representation which forms a vector space. This method is parameterized by a single learnable parameter which controls the discrimination power of the method. This makes the method applicable to both finer and coarser classification tasks which require greater and less discrimination power respectively. The proposed pooling method is inspired by related methods in the field of applied topology which map sets of points in

The layout of this paper is as follows. Section 2 reviews related works on pooling methods. Section 3 describes the proposed pooling method. Section 4 presents an evaluation of this method. Finally section 5 draws some conclusions from this work.

Let graph G=(V,E) be a graph where V and E are the corresponding sets of vertices and edges respectively. Let D be the set of vertex representations output from a sequence of convolutional layers applied to G. We assume that each vertex representation is an element of Rn. The proposed pooling method takes as input D and returns a function. That is, the method is a map from the space of sets to the space of functions. It contains two steps which we now describe in turn.

The set of vertex representations D is an object in the category of sets which we denote Ω. Let Sigmoid:Rn→I be the n

1 where I={(x1,…,xn)∈[0,1]n} is the n-dimensional interval. In the first step of the proposed pooling method we apply the n-dimensional Sigmoid elementwise to D to give a map S:Ω→Ω. To illustrate this map consider Figure 1 which displays an example set D containing three elements in R2. The result of applying the map S to this set is illustrated in Figure 1.

be a probability distribution. For the purposes of this work we used the

In the second step of the proposed pooling method we apply a map F:Ω→Lp(I) to S(D). Here Lp(I) is the vector space of functions I→R where the p-th power of the absolute value is Lebesgue integrable and is equipped with the Lp-norm defined in Equation 3 (Christensen, 2010). Note that, function addition and subtraction is performed pointwise.

For D∈Ω the corresponding function representation ρ:I→R is defined in Equation 4

The parameter σ may be interpreted in a couple of ways. As the value of σ approaches 0 the function representation ρ:I→R approaches a complete invariant. That is, distinct sets D map to distinct functions where the distance between these functions as defined by the norm in Equation 3 is greater than zero. On the other hand, as σ approaches ∞, the distance between these functions reduces. An alternative way of interpreting the parameter σ is as follows. As mentioned above, as the value of σ approaches ∞ the probability distribution approaches a uniform function on the domain I. In this case the proposed pooling method differs from computing the sum of the elements of D by a multiplicative constant only.

The first dataset consider was the MUTAG dataset which consists of 188 chemical compounds where the classification problem is binary and concerns predicting if a chemical compound has mutagenicity or not (Debnath et al., 1991). Each chemical compound is represented as a graph where there are 7 distinct types of vertices.

The second dataset consider was the PROTEINS dataset which consists of 1113 proteins where the classification task is binary and concerns predicting if a protein is an enzyme or not (Borgwardt et al., 2005). Each protein is represented as a graph where there are 3 distinct types of vertices. Both of the datasets considered are commonly used to evaluate graph neural networks (Fey and Lenssen, 2019).

The feed-forward network architecture used consists of the following six layers. The first two layers are convolutional layers. A number of studies have found that two convolutional layers empirically gives best performance (Kipf and Welling, 2016). The third layer is a fully connected linear layer. The fourth layer is the pooling method used. The fifth layer is another fully connected linear layer. The final layer is a softmax function.

is equal to the number of vertex types since one-hot encoding was used. The dimensions of the two convolutional layers

The model parameters to be optimized in the architecture of section 4.2 are the weights and biases of the convolutional and linear layers plus the parameter σ

of the pooling method. For loss function a Cross Entropy loss term plus an