Recently, Graph Convolution Network (GCN) based methods have achieved outstanding performance for recommendation. These methods embed users and items in Euclidean space, and perform graph convolution on user-item interaction graphs. However, real-world datasets usually exhibit tree-like hierarchical structures, which make Euclidean space less effective in capturing user-item relationship. In contrast, hyperbolic space, as a continuous analogue of a tree-graph, provides a promising alternative. In this paper, we propose a fully hyperbolic GCN model for recommendation, where all operations are performed in hyperbolic space. Utilizing the advantage of hyperbolic space, our method is able to embed users/items with less distortion and capture user-item interaction relationship more accurately. Extensive experiments on public benchmark datasets show that our method outperforms both Euclidean and hyperbolic counterparts and requires far lower embedding dimensionality to achieve comparable performance. 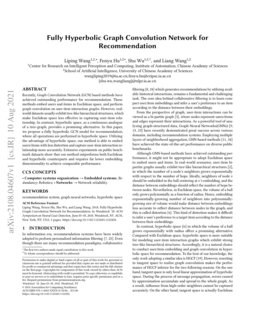 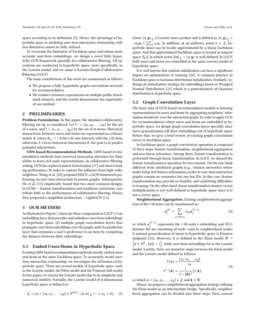 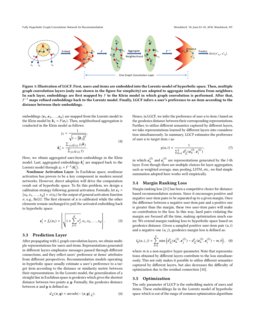 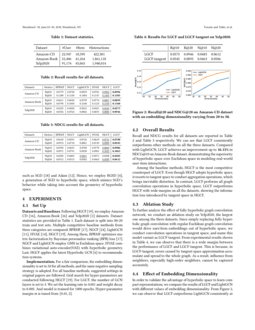 Although GNN-based methods have achieved outstanding performance, it might not be appropriate to adopt Euclidean space to embed users and items. In real-world scenarios, user-item bi-partite graphs usually exhibit tree-like hierarchical structures (Adcock et al., 2013), in which the number of a node’s neighbors grows exponentially with respect to the number of hops. Ideally, neighbors of node v should be embedded in the ball centering at v’s embedding, and the distance between embeddings should reflect the number of hops between nodes. Nevertheless, in Euclidean space, the volume of a ball only grows polynomially as a function of radius. Hence, embedding exponentially-growing number of neighbors into polynomially-growing size of volume would make distance between embeddings less accurate to reflect distance between nodes in the graph, and this is called distortion (Chami et al., 2019). This kind of distortion makes it difficult to infer a user’s preference to a target item according to the distance between their embeddings.

In contrast, hyperbolic space (Chami et al., 2019) in which the volume of a ball grows exponentially with radius offers a promising alternative. Compared with Euclidean space, hyperbolic space is more suitable for modeling user-item interaction graphs which exhibit strong tree-like hierarchical structures. Accordingly, it is a natural choice to conduct user/item embedding and graph convolution in hyperbolic space for recommendation. To the best of our knowledge, the only work adopting a similar idea is HGCF (Sun et al., 2021). However, resorting to tangent space to realize graph convolution makes the performance of HGCF inferior for the two following reasons. On the one hand, tangent space is only local linear approximation of hyperbolic space. During the process of message propagation, errors caused by approximation accumulate and spread to the whole graph. As a result, influence from high-order neighbors cannot be captured accurately. On the other hand, tangent space is actually Euclidean space according to its definition (Boothby, 1986). Hence, the advantage of hyperbolic space in modeling user-item interaction relationship with less distortion cannot be fully utilized.

To overcome the limitation of Euclidean space and obtain more accurate user/item embeddings, we design a novel fully hyperbolic GCN framework specially for collaborative filtering. All operations are conducted in hyperbolic space, more specifically, in the Lorentz model, and we name it Lorentz Graph Collaborative Filtering (LGCF).

The main contributions of this work are summarized as follows:

As illustrated in Figure 1

where ⟨x,y⟩L is Lorentz inner product and is defined as ⟨x,y⟩L=−x0y0+∑di=1xiyi. In addition, at an arbitrary point x∈L, hyperbolic space can be locally approximated by a linear Euclidean space. And this approximated Euclidean space is termed as tangent space TxL in which norm ∥x∥L=⟨x,y⟩ is well defined. In LGCF, both users and items are embedded in the same Lorentz model of hyperbolic space.

It is well known that random initialization can have a significant impact on optimization in training (Sutskever et al., 2013)

(Nagano et al., 2019) which is a generalization of Gaussian distribution to hyperbolic space.

The basic idea of GCN-based recommendation models is learning representations for users and items by aggregating neighbors’ information iteratively over the interaction graph. In order to apply GCN for recommendation where users and items are embedded in hyperbolic space, we design graph convolution layers specially since naïve generalization will drive embeddings out of hyperbolic space. Before that, we give a brief review of existing graph convolution layers in Euclidean space.

Neighborhood Aggregation. Exising neighborhood aggregation of the l-th layer can be summarized as:

in which e(l−1)j represents the j-th node’s embedding and ^N(i) denotes the set consisting of node i and its neighborhood nodes. A natural generalization of mean to hyperbolic space is Einstein midpoint (Ungar, 2008). However, it is defined in the Klein model K={x∈Rd:∥x∥<1}, while user/item embeddings lie in the Lorentz model. Luckily, there are isometric maps between the Klein model and the Lorentz model defined as follows:

Here, we obtain aggregated user/item embeddings in the Klein model. Last, aggregated embeddings k′i are mapped back to the Lorentz model through zi=F−1(k′i).

Nonlinear Activation Layer. In Euclidean space, nonlinear activation has proven to be a key component in modern neural networks. However, direct adoption will drive the computation result out of hyperbolic space. To fix this problem, we design a calibration strategy following general activation. Formally, let xi=[x0,x1,…,xd]=σ(zi)

be the output of general activation function

x is calibrated while the other elements remain unchanged to pull the activated embedding back to hyperbolic space:

After propagating with L graph convolution layers, we obtain multiple representations for users and items. Representations generated in different layers emphasize messages passed through different connections, and they reflect users’ preference or items’ attributes from different perspectives. Recommendation models operating in hyperbolic space usually estimate a user’s preference to a target item according to the distance or similarity metric between their representations. In the Lorentz model, the generalization of a straight line in Euclidean space is geodesics which gives the shortest distance between two points x,y. Formally, the geodesics distance between x and y is defined as:

is a non-negative hyper-parameter. Note that representations obtained by different layers contribute to the loss simultaneously. This not only makes it possible to utilize different semantics captured by different layers, but also decreases the difficulty of optimization due to the residual connection

The only parameter of LGCF is the embedding matrix of users and items. These embeddings lie in the Lorentz model of hyperbolic space which is out of the range of common optimization algorithms such as SGD (Robbins and Monro, 1951) and Adam (Kingma and Ba, 2014). Hence, we employ RGSD (Bonnabel, 2013), a generation of SGD to hyperbolic space, which mimics SGD’s behavior while taking into account the geometry of hyperbolic space.

Implementation. For a fair comparison, the embedding dimensionality is set to 50 for all methods, and the same negative sampling strategy is adopted. For all baseline methods, suggested settings in original papers are followed. Grid search for hyper-parameters are conducted following HGCF (Sun et al., 2021)

Recall and NDCG results for all datasets are reported in Table 2 and Table 3 respectively. We can see that LGCF consistently outperforms other methods on all the three datasets. Compared with LightGCN, LGCF achieves an improvement up to 16.15% in NDCG@10 on Amazon-Book dataset, demonstrating the superiority of hyperbolic space over Euclidean space in modeling real-world user-item interactions.

Among the baseline methods, HGCF is the most competitive counterpart of LGCF. Even though HGCF adopts hyperbolic space, it resorts to tangent space to conduct aggregation operations, which brings inevitable distortion. In contrast, LGCF performs all graph convolution operations in hyperbolic space. LGCF outperforms HGCF with wide margins on all the datasets, showing the information loss introduced by tangent space in HGCF.

To further analyze the effect of fully hyperbolic graph convolution network, we conduct an ablation study on Yelp2020, the largest one among the three datasets. Since simply replacing fully hyperbolic graph convolution with regular Euclidean graph convolution would drive user/item embeddings out of hyperbolic space, we conduct convolution operations in tangent space, and name this model variant as LGCF-tangent. From experimental results shown in Table 4, we can observe that there is a wide margin between the performance of LGCF and LGCF-tangent. This is because, in LGCF-tangent, errors caused by tangent space approximation accumulate and spread to the whole graph. As a result, influence from neighbors, especially high-order neighbors, cannot be captured accurately.