Recently, deep learning methods have made a significant improvement in com- pressive sensing image reconstruction task. However, it still remains a problem of block effect which degrades the reconstruction results. In this paper, we pro- pose a fully-convolutional network, where the full image is directly measured with a convolutional layer. Thanks to the overlapped convolutional measure- ment, the block effect is removed. In addition, because of the jointly training of the measurement and reconstruction stages, the adaptive measurement can be obtained. Furthermore, to enhance the performance of the network, resid- ual learning is used in the reconstruction network. Experimental results show that the proposed method outperforms the existing methods in both PSNR and visual effect. 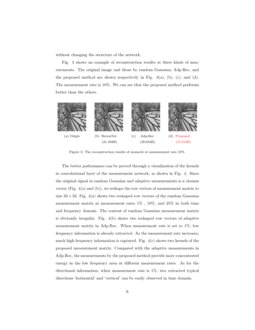 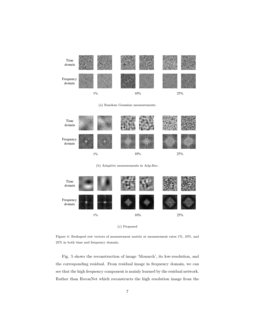 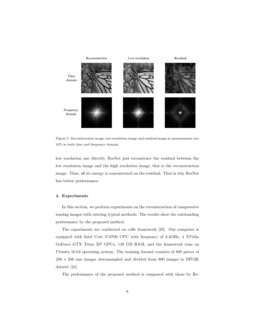 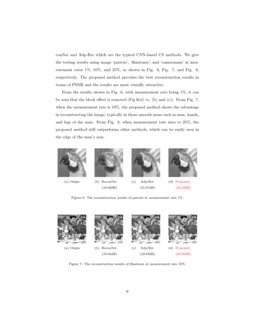 is able to acquire measurements of signals at sub-Nyquist rates and recover signals with high probability when the signals are sparse in a certain domain. Greedy algorithms

needell2010cosamp ; babacan2010bayesian , convex optimization algorithms candes2005decoding ; figueiredo2007gradient , and iterative algorithms donoho2009message ; daubechies2004iterative have been used for recovering images in conventional CS. However, almost all these methods recover images by solving an optimization problem, which is time-consuming. In order to reduce the computational complexity in the reconstruction stage, convolutional neural networks (CNNs) are applied to replace the optimization process. CNN-based methods mousavi2015deep ; kulkarni2016reconnet ; mousavi2017learning ; mousavi2017deepcodec ; xie2017adaptive use big data stevens2017 to train the networks that speed up the reconstruction stage. Mousavi, Patel, and Baraniuk mousavi2015deep

kulkarni2016reconnet and DeepInverse mousavi2017learning introduce CNNs to the reconstruction problem, where the random Gaussian measurement matrix is used to generate the measurements. Instead, the methods mousavi2017deepcodec ; xie2017adaptive using adaptive measurement learn a transformation from signals to the measurements. This mechanism allows measurements to retain more information from images. The methods mentioned above divide an image into blocks, which breaks the structure information of the image. This will cause the block effect in the reconstructed image.

In this paper, we propose a fully convolutional measurement network for CS image reconstruction. Instead of block-wise methods, a convolutional layer is applied to obtain the measurement from a full image, which keeps the integrity of structure information of the original image. Furthermore, motivated by the residual learning proposed by ResNet he2016deep

, we apply residual connection block (Resblock) in the proposed network for improvement. Experimental results show that the proposed method outperforms the state-of-the-art method 1

Recently, deep learning methods have been applied in CS image reconstruction tasks and achieve promising results such as mousavi2015deep ; kulkarni2016reconnet ; mousavi2017deepcodec . Among them, CNN-based methods present superior performance. ReconNet kulkarni2016reconnet is a representative work that applies CNNs in reconstructing low-resolution mixed image measured by random Gaussian matrix. The framework is shown in Fig. 1.

The training of the network is driven by the error between the label and the reconstructed image. And the loss function is given by

where f(yi,{W}) is the i−th reconstructed image of ReconNet. xi is the i−th original signal as well as the i−th label. {W} means the training parameters in ReconNet. T is the total number of image blocks in the training dataset. The loss function is minimized by tuning {W} using back propagation.

Based on the way the original image is measured, deep learning methods for CS reconstruction can be divided into two categories: fixed random Gaussian measurement and adaptive measurement.

Mousavi et al. mousavi2015deep firstly use SDA to recover signals from undersampled measurements. ReconNet kulkarni2016reconnet and DeepInverse mousavi2017learning utilizes CNNs to recover signals from Gaussian measurements. DR2-Net yao2017dr , inheriting ReconNet, adds residual connection blocks (Resblock) to its reconstruction stage and achieves better performance. Instead of learning to directly reconstruct the high-resolution image from the low-resolution one, DR2-Net learns the residual between the ground truth image and the preliminary reconstructed image. However, the measurements of these methods are randomly measured, which is not optimally designed for natural images.

In order to keep the information of the training data, the adaptive measurement is proposed. Methods including improved ReconNet lohit2017convolutional , Adp-Rec111Adp-Rec stands for adaptive measurement network for CS image reconstruction, proposed in our previous work. xie2017adaptive , and DeepCodec mousavi2017deepcodec are all based on adaptive measurement. In cases of the improved ReconNet and Adp-Rec, a fully-connected layer is used to measure the signals, which allows for a jointly learning of the measurement and reconstruction stages. With the learned measurement matrix, a significant gain in terms of PSNR is achieved. DeepCodec, closely related to the DeepInverse, learns a transformation for dimensionality reduction. Learning measurements from the original signals helps to preserve more information compared with taking random measurements.

, we remove the batch normalization layer in Resblock. Our framework is different from super-resolution (SR)

deng2016similarity  fan2017compressed  dong2016image  Ledig_2017_CVPR , since SR just learns a transform form the low-resolution images to high-resolution images, while the proposed framework is jointly trained from the measurement to the recovery part.

The loss function of the proposed network is given by

The main advantage of the proposed network is the use of convolutional layer as the measurement matrix. By means of the overlapped convolutional kernels, this structure can remove block effect of the reconstructed images. In details, one feature map contains several measurements of each pixel, which is similar to the idea proposed by He et al. he2017mask that the feature map preserves the explicit per-pixel spatial correspondence. Another advantage is that the fully convolutional neural network can deal with images of any size, which breaks the limitation that fully-connected layer is only capable of measuring the fixed size of images. Once the network is trained, we can test images with different sizes without changing the structure of the network.

Fig. 3 shows an example of reconstruction results at three kinds of measurements. The original image and those by random Gaussian, Adp-Rec, and the proposed method are shown respectively in Fig. 3(a), (b), (c), and (d). The measurement rate is 10%. We can see that the proposed method performs better than the others.

The better performance can be proved through a visualization of the kernels in convolutional layer of the measurement network, as shown in Fig. 4

. Since the original signal in random Gaussian and adaptive measurements is a cloumn vector (Fig.

In this section, we perform experiments on the reconstruction of compressive sensing images with existing typical methods. The results show the outstanding performance by the proposed method.

The experiments are conducted on caffe framework

jia2014caffe . Our computer is equipped with Intel Core i7-6700 CPU with frequency of 3.4GHz, 4 NVidia GeForce GTX Titan XP GPUs, 128 GB RAM, and the framework runs on Ubuntu 16.04 operating system. The training dataset consists of 800 pieces of 256×256 size images downsampled and divided from 800 images in DIV2K dataset timofte2017ntire .

The performance of the proposed method is compared with those by ReconNet and Adp-Rec which are the typical CNN-based CS methods. We give the testing results using image ‘parrots’, ‘flinstones’, and ‘cameraman’ at measurement rates 1%, 10%, and 25%, as shown in Fig. 6, Fig. 7, and Fig. 8, respectively. The proposed method provides the best reconstruction results in terms of PSNR and the results are most visually attractive.

For an overall look on the performance, the reconstruction results of 11 test images at measurement rates 1%, 10%, and 25% with the methods including ReconNet, DR2-Net, Adp-Rec, Fully-Conv222Fully-Conv consists of a convolutional layer and a deconvolutional layer without Resblock, which can be regarded as the tiny model of the proposed network., and the proposed one are shown in Table 1. The mean PSNR is given in the type of blue background. It is obvious that the proposed method shows greatest performance in almost all test images.

From Table 1, it can be concluded that Adp-Rec beats DR2-Net and ReconNet about 3dB in all measurement rates because of its adaptive measurement. Based on the standard ReconNet kulkarni2016reconnet , the improved ReconNet lohit2017convolutional adds several tricks such as adaptive measurement and adversarial loss. Its performance is even lower than Adp-Rec. Despite its promising results, Adp-Rec still divides image into blocks, ignoring the relevance between neighbouring blocks, which causes to the block effect in reconstructed images. For this reason, Fully-Conv uses a convolution layer as measurement matrix to deal with this problem. It achieves comparable results with Adp-Rec even though it contains no additional operation.

To further improve the reconstruction results, we put Resblock after Fully-Conv structure because of the brilliant performance of Resblock in reconstruction task. With this enhancement, the proposed method obtains the best performance in terms of PSNR at all measurement rates, as shown in Table 1.

We also measure the quality of images with Mean Opinion Score (MOS). The test results of different images are shown in Table 2. In this experiment, 26 volunteers take part in ranking the images. The quality of the images is divided into five levels, from 1 to 5, with the quality from low to high. All the test images are randomly ranked before being scored and they are displayed group by group. Each group has four reconstruction images, in different methods, and one original scene image. All participants take this test on the same computer screen, from the same angle and distance. Here the distance from the screen to the tested persons is 50 cm and the eyes of those persons are of the same height of the center of the screen. In addition, we also use structural similarity index (SSIM) to evaluate our method and existing block-wised methods as shown in Table 2. The case of MR = 1% is taken as an example.

In terms of hardware implementation, we follow the approach of the previous work proposed in shi2011high in which sliding window is used to measure the scene. Similarly, we can replace the random Gaussian measurement matrix with the learned pre-defined parameters in the conv layer of the measurement network. The reconstruction part is not on optical device, so only the measurement part needs to be implemented with the approach above.

This paper proposes a novel CNN-based deep neural network for high-quality compressive sensing image reconstruction. The network uses a fully convolutional architecture, which removes the block effect caused by block-wise methods. For a further improvement, we add Resblock after the deconvolutional layer, making the network learn the residual information between low and high resolution images. With this enhancement, the network shows best performance in reconstruction task compared with other methods. In future work, we are going to apply perceptual loss into the network for better reconstruction result. And semantics-oriented reconstruction will be also considered.