In recent studies, it has shown that speaker patterns can be learned from very short speech segments (e.g., 0.3 seconds) by a carefully designed convolutional & time-delay deep neural network (CT-DNN) model. By enforcing the model to discriminate the speakers in the training data, frame-level speaker features can be derived from the last hidden layer. In spite of its good performance, a potential problem of the present model is that it involves a parametric classifier, i.e., the last affine layer, which may consume some discriminative knowledge, thus leading to `information leak' for the feature learning. This paper presents a full-info training approach that discards the parametric classifier and enforces all the discriminative knowledge learned by the feature net. Our experiments on the Fisher database demonstrate that this new training scheme can produce more coherent features, leading to consistent and notable performance improvement on the speaker verification task. 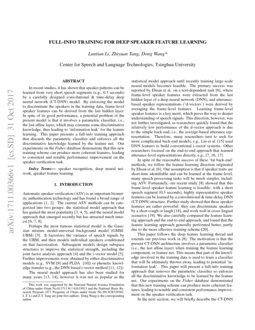 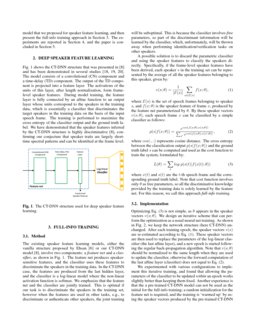 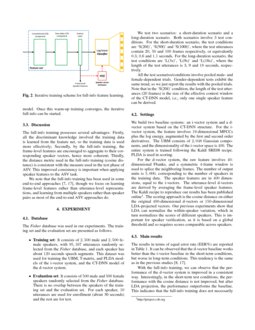 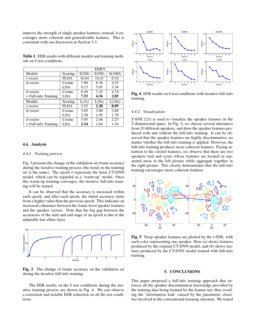 Automatic speaker verification (ASV) is an important biometric authentication technology and has found a broad range of applications [1, 2]. The current ASV methods can be categorized into two groups: the statistical model approach that has gained the most popularity [3, 4, 5], and the neural model approach that emerged recently but has attracted much interest [6, 7, 8].

. It factorizes the variance of speech signals by the UBM, and then models individual speakers conditioned on that factorization. Subsequent models design subspace structures to improve the statistical strength, including the joint factor analysis approach

The neural model approach has also been studied for many years [13, 14], however it was not as popular as the statistical model approach until recently training large-scale neural models becomes feasible. The primary success was reported by Ehsan et al. on a text-dependent task [6], where frame-level speaker features were extracted from the last hidden layer of a deep neural network (DNN), and utterance-based speaker representations (‘d-vectors’) were derived by averaging the frame-level features. Learning frame-level speaker features is a key merit, which paves the way to deeper understanding of speech signals. This direction, however, was not further investigated, as researchers quickly found that the relatively low performance of the d-vector approach is due to the simple back-end, i.e., the average-based utterance representation. Therefore, many researchers turn to seek for more complicated back-end models, e.g., Liu et al. [15] used DNN features to build conventional i-vector systems. Other researchers focused on the end-to-end approach that learned utterance-level representations directly, e.g., [7, 16, 17].

In spite of the reasonable success of these ‘fat back-end’ methods, we follow the feature learning direction originated by Ehsan et al. [6]. Our assumption is that if speaker traits are short-time identifiable and can be learned at the frame-level, many speech processing tasks will be much simpler, including ASV. Fortunately, our recent study [8] showed that this frame-level speaker feature learning is feasible: with a short speech segment (0.3 seconds), highly representative speaker features can be learned by a convolutional & time-delay DNN (CT-DNN) structure. Further study showed that these speaker features are rather powerful: they can discriminate speakers by a short cough or laugh [18], and work well in cross-lingual scenarios [19]. We also carefully compared the feature learning approach and the end-to-end approach, and found that the feature learning approach generally performed better, partly due to the more effective training scheme [20].

[8]. The motivation is that the present CT-DNN architecture involves a parametric classifier (i.e., the last affine layer) when training the feature learning component, or feature net. This means that part of the knowledge involved in the training data is used to learn a classifier that will be ultimately thrown away, leading to potential ‘information leak’. This paper will present a full-info training approach that removes the parametric classifier so enforces all the discriminative knowledge to be learned by the feature net. Our experiments on the Fisher database demonstrated that this new training scheme can produce more coherent features, leading to notable and consistent performance improvement on the speaker verification task.

In the next section, we will briefly describe the CT-DNN model that we proposed for speaker feature learning, and then present the full-info training approach in Section 3. The experiments are reported in Section 4, and the paper is concluded in Section 5.

Fig. 1 shows the CT-DNN structure that was presented in [8] and has been demonstrated in several studies [18, 19, 20]. The model consists of a convolutional (CN) component and a time-delay (TD) component. The output of the TD component is projected into a feature layer. The activations of the units of this layer, after length normalization, form frame-level speaker features. During model training, the feature layer is fully connected by an affine function to an output layer whose units correspond to the speakers in the training data, which is essentially a classifier that discriminates the target speakers in the training data on the basis of the input speech frame. The training is performed to maximize the cross entropy of the classifier output and the ground truth label. We have demonstrated that the speaker features inferred by the CT-DNN structure is highly discriminative [8], confirming our conjecture that speaker traits are largely short-time spectral patterns and can be identified at the frame level.

The existing speaker feature learning models, either the vanilla structure proposed by Ehsan [6] or our CT-DNN model [8], involve two components: a feature net and a classifier, as shown in Fig. 1

free parameters, so part of the discriminant information will be learned by the classifier, which, unfortunately, will be thrown away when performing identification/verification tasks on other speakers.

where E(s) is the set of speech frames belonging to speaker s, and f(x;θ) is the speaker feature of frame x, produced by the feature net parameterized by θ. By these speaker vectors v(s;θ), each speech frame x can be classified by a simple classifier as follows:

where cos(⋅,⋅) represents cosine distance. The cross entropy between the classification output p(s|f(x;θ)) and the ground truth label s can be computed and used as the cost function to train the system, formulated by:

where x(t) and s(t) are the t-th speech frame and the corresponding ground truth label. Note that cost function involves only θ as free parameters, so all the discriminative knowledge provided by the training data is solely learned by the feature net. For this reason, we call this approach full-info training.

Optimizing Eq. (3) is not simple, as θ appears in the speaker vectors v(s;θ). We design an iterative scheme that can perform the optimization as a usual neural net training. As shown in Fig. 2

, we keep the network structure (here CT-DNN) unchanged. After each training epoch, the speaker vectors

are re-estimated according to Eq. (

1). These speaker vectors are then used to replace the parameters of the log-linear classifier (the last affine layer), and a new epoch is started following the regular back-propagation algorithm. Note that v(s;θ) should be normalized to the same length when they are used to update the classifier, otherwise the forward computation of the last affine layer (classifier) does not equal to Eq. (2).

We experimented with various configurations to implement this iterative training, and found that allowing the parameters of the classifier to be updated within an epoch works slightly better than keeping them fixed. Another experience is that the a pre-trained CT-DNN model can not be used as the initial for the full-info training; a random initialization for the feature net is required, and the training is ‘warmed up’ by using the speaker vectors produced by the pre-trained CT-DNN model. Once this warm-up training converges, the iterative full-info can be started.

The Fisher database was used in our experiments. The training set and the evaluation set are presented as follows.

All the test scenarios/conditions involve pooled male- and female-dependent trials. Gender-dependent tests exhibit the same trend, so we just report the results with the pooled trials. Note that in the ‘S(20f)’ condition, the length of the test utterances (20 frames) is the size of the effective context window of the CT-DNN model, i.e., only one single speaker feature can be derived.

We build two baseline systems: an i-vector system and a d-vector system based on the CT-DNN structure. For the i-vector system, the feature involves 19-dimensional MFCCs plus the log energy, augmented by the first and second order derivatives. The UBM consists of 2,048 Gaussian components, and the dimensionality of the i-vector space is 400. The entire system is trained following the Kaldi SRE08 recipe. PLDA is used in scoring.

For the d-vector system, the raw feature involves 40-dimensional Fbanks, and a symmetric 4-frame window is used to splice the neighboring frames. The number of output units is 5,000, corresponding to the number of speakers in the training data. The speaker features are in 400 dimensions, equal to the i-vectors. The utterance-level d-vectors are derived by averaging the frame-level speaker features. The Kaldi recipe to reproduce our results has been published online111http://project.cslt.org. The scoring approach is the cosine distance on either the original 400-dimensional d-vectors or 150-dimensional LDA-projected vectors. Our previous experiments show that LDA can normalize the within-speaker variation, which in turn normalizes the scores of different speakers. This is important for speaker verification, as it is based on a global threshold and so requires scores comparable across speakers.

With the full-info training, we can observe that the performance of the d-vector system is improved in a consistent way. Interestingly, in the short-term test conditions, the performance with the cosine distance is not improved, but after LDA projection, the performance outperforms the baseline. This indicates that the full-info training does not necessarily improve the strength of single speaker features; instead, it encourages more coherent and generalizable features. This is consistent with our discussion in Section 3.3.

Fig. 3 presents the change of the validation-set frame accuracy during the iterative training process (the trend on the training set is the same). The epoch 0 represents the basic CT-DNN model, which can be regarded as a ‘warm-up’ model. Once this warm-up training converges, the iterative full-info training will be started.

It can be observed that the accuracy is increased within each epoch, and after each epoch, the initial accuracy starts from a higher value than the previous epoch. This indicates an increased coherence between the frame-level speaker features and the speaker vectors. Note that the big gap between the accuracies of the start and end stage of an epoch is due to the adaptable last affine layer.

The EER results on the 6 test conditions during the iterative training process are shown in Fig. 4. We can observe a consistent and notable EER reduction on all the test conditions.

This paper proposed a full-info training approach that enforces all the speaker discrimination knowledge provided by the training data being learned by the feature net, thus avoiding the ‘information leak’ caused by the parametric classifier involved in the conventional learning structure. We tested the method on the speaker verification task with the Fisher database, and found that it delivered consistent and notable performance improvement. Methods that encourage more coherent features are under investigation.