We present a novel method of compression of deep Convolutional Neural Networks (CNNs). The proposed method reduces the number of parameters of each convolutional layer by learning a 3D tensor termed Filter Summary (FS). The convolutional filters are extracted from FS as overlapping 3D blocks, and nearby filters in FS share weights in their overlapping regions in a natural way. The resultant neural network based on such weight sharing scheme, termed Filter Summary CNNs or FSNet, has a FS in each convolution layer instead of a set of independent filters in the conventional convolution layer. FSNet has the same architecture as that of the baseline CNN to be compressed, and each convolution layer of FSNet generates the same number of filters from FS as that of the basline CNN in the forward process. Without hurting the inference speed, the parameter space of FSNet is much smaller than that of the baseline CNN. In addition, FSNet is compatible with weight quantization, leading to even higher compression ratio when combined with weight quantization. Experiments demonstrate the effectiveness of FSNet in compression of CNNs for computer vision tasks including image classification and object detection. For classification task, FSNet of 0.22M effective parameters has prediction accuracy of 93.91 using ResNet-18 of 11.18M parameters as baseline. Furthermore, FSNet version of ResNet-50 with 2.75M effective parameters achieves the top-1 and top-5 accuracy of 63.80 task, FSNet is used to compress the Single Shot MultiBox Detector (SSD300) of 26.32M parameters. FSNet of 0.45M effective parameters achieves mAP of 67.63 on the VOC2007 test data with weight quantization, and FSNet of 0.68M parameters achieves mAP of 70.00 data. 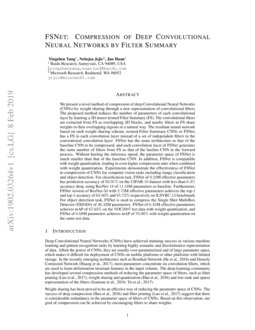 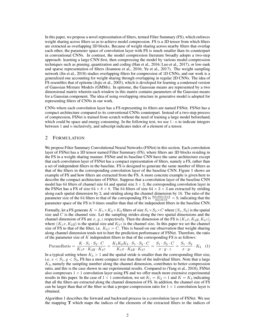 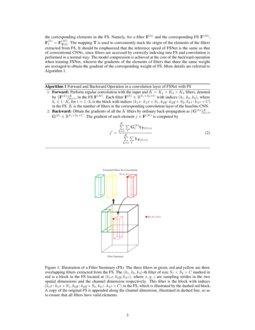 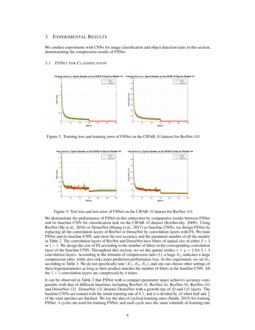 Deep Convolutional Neural Networks (CNNs) have achieved stunning success in various machine learning and pattern recognition tasks by learning highly semantic and discriminative representation of data. Albeit the power of CNNs, they are usually over-parameterized and of large parameter space, which makes it difficult for deployment of CNNs on mobile platforms or other platforms with limited storage. In the recently emerging architecture such as Residual Network

, most parameters concentrate on convolution filters, which are used to learn deformation invariant features in the input volume. The deep learning community has developed several compression methods of reducing the parameter space of filters, such as filter pruning

Weight sharing has been proved to be an effective way of reducing the parameter space of CNNs. The success of deep compression (Han et al., 2016) and filter pruning (Luo et al., 2017) suggest that there is considerable redundancy in the parameter space of filters of CNNs. Based on this observation, our goal of compression can be achieved by encouraging filters to share weights.

In this paper, we propose a novel representation of filters, termed Filter Summary (FS), which enforces weight sharing across filters so as to achieve model compression. FS is a 3D tensor from which filters are extracted as overlapping 3D blocks. Because of weight sharing across nearby filters that overlap each other, the parameter space of convolution layer with FS is much smaller than its counterpart in conventional CNNs. In contrast, the model compression literature broadly adopts a two-step approach: learning a large CNN first, then compressing the model by various model compression techniques such as pruning, quantization and coding (Han et al., 2016; Luo et al., 2017), or low-rank and sparse representation of filters (Ioannou et al., 2016; Yu et al., 2017). The weight sampling network (Jin et al., 2018) studies overlapping filters for compression of 1D CNNs, and our work is a generalized one accounting for weight sharing through overlapping in regular 2D CNNs. The idea of FS resembles that of epitome (Jojic et al., 2003)

, which is developed for learning a condensed version of Gaussian Mixture Models (GMMs). In epitome, the Gaussian means are represented by a two dimensional matrix wherein each window in this matrix contains parameters of the Gaussian means for a Gaussian component. The idea of using overlapping structure in generative model is adopted for representing filters of CNNs in our work.

CNNs where each convolution layer has a FS representing its filters are named FSNet. FSNet has a compact architecture compared to its conventional CNNs counterpart. Instead of a two-step process of compression, FSNet is trained from scratch without the need of training a large model beforehand, which could be space and energy consuming. In the following text, we use 1:n to indicate integers between 1 and n inclusively, and subscript indicates index of a element of a tensor.

are extracted by striding along each spatial dimension by

2, and striding along the channel dimension by 16. The ratio of the parameter size of the 64 filters to that of the corresponding FS is 64×64×3×364×8×8=9, indicating that the parameter space of the FS is 9 times smaller than that of the independent filters in the baseline CNN.

Formally, let a FS generate K=K1×K2×K3 filters of size S1×S2×C where (S1,S2) is the spatial size and C is the channel size. Let the sampling strides along the two spatial dimensions and the channel dimension of FS are x,y,z respectively. Then the dimension of the FS is (K1x,K2y,K3z), where (K1x,K2y) is the spatial size and K3z is the channel size. In this paper we set the channel size of FS to that of the filter, i.e. K3z=C. This is based on our observation that weight sharing along channel dimension tends not to hurt the prediction performance of FSNet. Therefore, the ratio of the parameter size of K independent filters to that of the corresponding FS is as follows:

In a typical setting where K3>1 and the spatial stride is smaller than the corresponding filter size, i.e. x<S1, y<S2, FS has a more compact size than that of the individual filters. Note that a large K3, namely the sampling number along the channel dimension, contributes to better compression ratio, and this is the case shown in our experimental results. Compared to (Yang et al., 2018), FSNet also compresses 1×1 convolution layer using FS and we offer much more extensive experimental results in this paper. In the case of 1×1 convolution, we set K1=K2=1 and K=K3 indicating that all the filters are extracted along the channel dimension of FS. In addition, the channel size of FS can be larger than that of the filter so that a proper compression ratio for 1×1 convolution layer is obtained.

Algorithm 1 describes the forward and backward process in a convolution layer of FSNet. We use the mapping T which maps the indices of the elements of the extracted filters to the indices of the corresponding elements in the FS. Namely, for a filter F(k) and the corresponding FS F(M), F(k)t=F(M)T(t). The mapping T is used to conveniently track the origin of the elements of the filters extracted from FS. It should be emphasized that the inference speed of FSNet is the same as that of conventional CNNs, since filters are accessed by correctly indexing into FS and convolution is performed in a normal way. The model compression is achieved at the cost of the backward operation when training FSNet, wherein the gradients of the elements of filters that share the same weight are averaged to obtain the gradient of the corresponding weight of FS. More details are referred to Algorithm 1. Figure 2 illustrates typical architecture of FSNet where each convolution has a FS.

We conduct experiments with CNNs for image classification and object detection tasks in this section, demonstrating the compression results of FSNet.

, and one can choose other settings of these hyperparameters as long as their product matches the number of filters in the baseline CNN. All the

1×1 convolution layers are compressed by 8 times.

It can be observed in Table 2 that FSNet with a compact parameter space achieves accuracy comparable with that of different baselines including ResNet-18, ResNet-34, ResNet-50, ResNet-101 and DenseNet-121. DenseNet-121 denotes DenseNet with a growth rate of 32 and 121 layers. The baseline CNNs are trained with the initial learning rate of 0.1, and it is divided by 10 when half and 34

of the total epoches are finished. We use the idea of cyclical learning rates

(Smith, 2015) for training FSNet. 4 cycles are used for training FSNet, and each cycle uses the same schedule of learning rate as that of the baseline. A new cycle starts with the initial learning rate of 0.1 after the previous cycle ends. The training loss and training error for the first cycle of FSNet is shown in Figure 3, and the test loss and test error are shown in Figure 3. We can see that the patterns of training and test of FSNet are similar to that of its baseline, ResNet-101.

Furthermore, FSNet with weight quantization, or FSNet-WQ, boosts the compression ratio without sacrificing performance. One-time weight quantization is performed for each convolution layer of trained FSNet. 256 levels are evenly set between the maximum and minimum values of all the element of the FS in a convolution layer, and then each element of the FS is set to its nearest level. In this way, a quantized FS uses a byte to store each of its element, together with the original maximum and minimum values. The number of effective parameters of FSNet-WQ is computed by considering an element of a quantized FS as 1/4 parameter since the storage required for a byte is 1/4 of that for a floating number.

FSNet-WQ achieves more than 30× compression ratio for all the four types of ResNet, and it has less than 0.4% accuracy drop for ResNet and DenseNet. It is interesting to observe that FSNet-WQ even enjoys slight better accuracy than FSNet for ResNet-34 and ResNet-50. In addition, FSNet-WQ achieves exactly the same accuracy as the baseline with 16× compression ratio for DenseNet-121. We argue that weight quantization imposes regularization on the filter summary which may improve its prediction performance.

In order to evaluate FSNet on large-scale dataset, Table 3 shows its performance on ILSVRC-12 dataset (Russakovsky et al., 2015) using ResNet-50 as baseline. The accuracy is reported on the standard 50k validation set. We train ResNet-50 and the corresponding FSNet for 100 epoches. The initial learning rate is 0.1, and it is divided by 10 at epoch 30,60,90 respectively.

We evaluate the performance of FSNet for object detection in this subsection. The baseline neural network is the Single Shot MultiBox Detector (SSD300) (Liu et al., 2016)

. The baseline is adjusted by adding batch normalization

(Ioffe & Szegedy, 2015) layers so that it can be trained from scratch. Both SSD300 and FSNet are trained on the VOC 2007/2012 training datasets, and the mean average precision (mAP) is reported on the VOC 2007 test dataset shown in Table 4. We employ two versions of FSNet with different compression ratios by adjusting the sampling number along the channel dimension, denoted by FSNet-1 and FSNet-2 respectively. Again, weight quantization either slightly improves mAP (for FSNet-1), or only slightly hurts it (for FSNet-2). Compared to Tiny SSD (Wong et al., 2018), FSNet-1-WQ enjoys smaller parameter space while its mAP is much better. Note that while the reported number of parameters of Tiny SSD is 1.13M, its number of effective parameters is only half of this number. i.e. 0.565M, as the parameters are stored in half precision floating-point. In addition, the model size of FSNet-1-WQ is 1.85MB, around 20% smaller than that of Tiny SSD, 2.3MB.

We present a novel method for compression of CNNs through learning weight sharing by Filter Summary (FS). Each convolution layer of the proposed FSNet learns a FS from which the convolution filters are extracted from, and nearby filters share weights naturally. By virtue of the weight sharing scheme, FSNet enjoys much smaller parameter space than its baseline while maintaining competitive predication performance. The compression ratio is further improved by one-time weight quantization. Experimental results demonstrate the effectiveness of FSNet in tasks of image classification and object detection.

We would like to express our gratitude to Boyang Li and Pradyumna Tambwekar for their efforts in training the baseline SSD on the VOC 2007/2012 dataset.