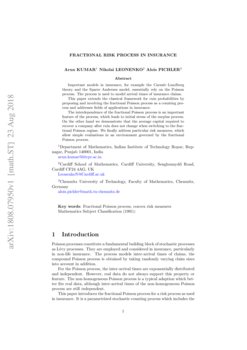 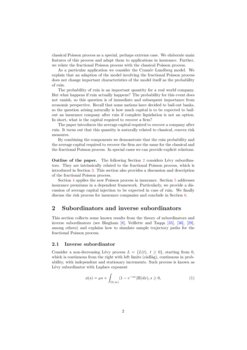 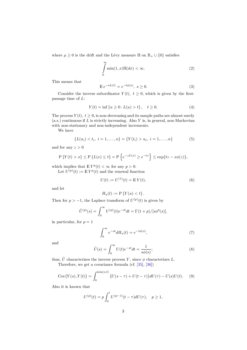 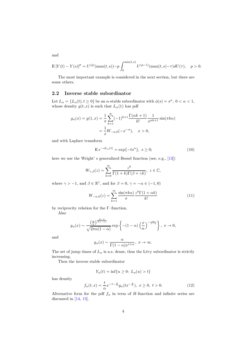 Companies, which are exposed to random orders or bookings, face the threat of ruin. But what happens if bookings fail to appear and ruin actually happens? The probability of this event cannot be ignored and is of immanent and substantial importance from economic perspective. Recall that some nations have decided to bail-out banks, so a question arising naturally is how much capital is to be expected to bail-out a company after ruin, if liquidation is not an option.

This paper introduces the average capital required to recover a company after ruin. It turns out that this quantity is naturally related to classical, convex risk measures. The corresponding arrival times of random events as bookings, orders, or stock orders on an exchange are often comfortably modelled by a Poisson process — this process is a fundamental building block to model the economy reality of random orders.

From a technical modelling perspective, the inter-arrival times of the Poisson process are exponentially distributed and independent

[17]. However, real data do not always support this property or feature (see, e.g., [13, 16, 36, 39] and references therein). To demonstrate the deviation we display arrival times of two empirical data sets consisting of oil futures high frequency trading (HFT) data and the classical Danish fire insurance data. Oil futures HFT data is considered for the period from July 9, 2007 until August 9, 2007. There is a total of 951,091 observations recorded over market opening hours. The inter-arrival times are recorded in seconds for both up-ticks and down-ticks (cf. Figures (a)a and (b)b). In addition, the Danish fire insurance data is available for a period of ten years until December 31, 1990, consisting of 2167 observations: the time unit for inter-arrival times in Figure (c)c is days. The charts in Figure 4 display the survival function of inter-arrival times of the data on a logarithmic scale and compares them with the exponential distribution. The data are notably not aligned, as is the case for the Poisson process. By inspection it is thus evident that arrival times of the data apparently do not follow a genuine Poisson process.

Arrival times of claim events are of striking economic importance for insurance companies as well and our discussion puts a slight focus on this economic segment. The Cramér–Lundberg model, to give an example, genuinely builds on the Poisson process. We replace the Poisson process by its fractional extension and investigate the new economic characteristics. We observe that the fractional Poisson process exposes companies to higher initial stress. But conversely, we demonstrate that the ruin probability and the average capital required to recover a firm are identical for the classical and the fractional Poisson process. In special cases we can even provide explicit relations.

Outline of the paper.

The following two Sections 2 and 3 are technical, they introduce and discuss the fractional Poisson process by considering Lévy subordinators. Section 4 introduces the risk process based on the fractional Poisson process, while the subsequent Section 5 addresses insurance in a dependent framework. This section contains a discussion of average capital injection to be expected in case of ruin. We finally discuss the risk process for insurance companies and conclude in Section 6.

Consider a non-decreasing Lévy process L={L(t), t≥0}, starting from 0, which is continuous from the right with left limits (càdlàg), continuous in probability, with independent and stationary increments. Such process is known as Lévy subordinator with Laplace exponent

The process Y(t), t≥0, is non-decreasing and its sample paths are almost surely (a.s.) continuous if L is strictly increasing. Also Y is, in general, non-Markovian with non-stationary and non-independent increments.

which implies that all moments are finite, i.e.,

Let U(p)(t):=EYp(t) and the renewal function

in particular, for p=1

The most important example is considered in the next section, but there are some others.

Then the inverse stable subordinator

Alternative form for the pdf fα in term of H-function and infinite series are discussed in [15, 18].

Its paths are continuous and nondecreasing. For α=1/2, the inverse stable subordinator is the running supremum process of Brownian motion, and for α∈(0,1/2] this process is the local time at zero of a strictly stable Lévy process of index α/(1−α).

be the Mittag-Leffler function (cf. [14]) and recall the following:

The following hold true for the processes Yα and Lα:

X(t) is said to have long-range-dependence (LRD) property if ∑∞k=1Cov(X(t),X(t+k))=∞. Further, for a non-stationary process Y(t) an equivalent definition is given as follows.

Let s>0 be fixed and t>s. Then the process Y(t) is said to have LRD property if

Thus this last property (17) can be interpreted as long-range dependence of Yα in view of (18).

There is a (complicated) form of all finite-dimensional distributions of Yα(t), t≥0, in the form of Laplace transforms, see [8].

2.3 Simulation of the stable subordinator

Comparing the latter with (10) reveals that the parameters of the α-stable random variable Lα(t), α∈(0,1), in the parametrization (19) are

The first definition of the fractional Poisson process (FPP) Nα={Nα(t), t≥0} is given by Mainardi et al. [27] (see also [28]) as a renewal process with Mittag-Leffler waiting times between the events

, are iid uniformly distributed on

[0,1] random variables. h(j)(⋅) is the pdf of jth convolution of the Mittag-Leffler distributions which is known as the generalized Erlang distribution and it is of the form

where the three-parametric Generalized Mittag-Leffler function is defined as (cf. (12) and [14])

where N={N(t), t≥0}, is the classical homogeneous Poisson process with parameter λ>0, which is independent of the inverse stable subordinator Yα.

One can compute the following expression for the one-dimensional distribution of FPP:

Finally, Beghin and Orsingher (cf. [5], [6]) show that the marginal distribution of FPP satisfies the system of fractional differential-difference equations

For d=1 the definition of Hurst index for renewal processes is discussed in [12]. For the FPP it is equal

where N={N(t),t≥0} is the classical homogeneous Poisson process with parameter 1, which is independent of the inverse stable subordinator Yα. Note that

The risk process is of fundamental importance in insurance. Based on the inverse subordinator process Y(t) (cf. (4)) we extend the classical risk process (also known as surplus process) and consider

Here, u>0 is the initial capital relative to the number of claims per time unit (the Poisson parameter λ) and the iid variables {Xi}, i≥1 with mean μ>0 model claim sizes. Nα(t), t≥0, is an independent of {Xi}, i≥1, fractional Poisson process. The parameter ρ≥0 is the safety loading; we demonstrate in Proposition 7 below that the risk process (27) satisfies the net profit condition iff ρ>0 (cf. Mikosch [33, Section 4.1]), which is economically that the company will not necessarily go bankrupt iff ρ>0.

Note that Y1(t)=t for α=1 so that the model (27) extends the classical ruin process considered in risk theory.

It is essential in (27) to observe that the counting process Nα(t) and the payment process Yα(t) follow the same time scale. These coordinated, or harmonized clocks are essential, as otherwise the model would over-predict too many claims (too many premiums, respectively). As well, different clocks for these two processes violated the profit condition (cf. Proposition 7 below).

The process for the non-homogeneous analogue of (27) is

and its non-homogeneous analogon

are martingales with respect to natural filtrations (cf. Proposition 7 below).

It follows from this observation that the time change imposed by Yα does not affect or violate the net or equivalence principle. Further, the part of the risk process corresponding to the premium (i.e., μλYα(t) without ρ, or by setting ρ=0) is the fair premium of the remaining claims process even under the fractional Poisson process.

The fractional risk process Rα(t) introduced in (27) is a submartingale (martingale, supermartingale, resp.) for ρ>0 (ρ=0, ρ<0, resp.) with respect to the natural filtration.

since the compensated FPP is a martingale. Thus

4.1 A variant of the surplus process

for the non-homogeneous process. As above, u is the initial capital, μ is the constant premium rate and the sequence of iid random variables (Xi)i≥1 is independent of FFP Nα(t). The net profit condition, as formulated by Mikosch [33], involves the expectation only. For this reason, the adapted surplus process (29) satisfies Mikosch’s net profit condition as well.

For α=1 we have that Y1(t)=t so that the simplified process (29) coincides with the classical surplus process considered in insurance (cf. Remark 5). However, the simplified risk process ~Rα(t), in general, is not a martingale unless α=1 and ρ=0, while Rα(t) is martingale for any α and ρ=0 by Proposition 7.

The formula (29) reveals an important property of the fractional Poisson process and the risk process Rα(t). Indeed, for small times t, there are more claims to be expected under the FPP regime, as

The inequality reverses for later times. This means that the premium income rate decays later. The time change imposed by FPP postpones claims to later times — another feature of the fractional Poisson process and a consequence of the martingale property.

However, the premium income is λμt in a real world situation. For this we conclude that the FPP can serve as a stress test for insurance companies within a small, upcoming time horizon.

In this section, we discuss the long range dependency property (LRD property, see Definition 2) of the risk process Rα(t).

The covariance structure of risk process Rα(t) is given by

Further, the variance of Rα(t) is