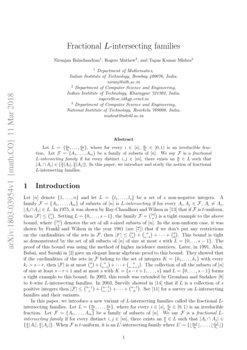 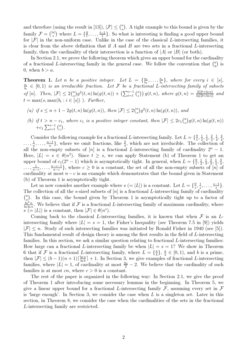 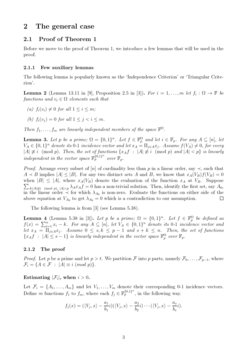 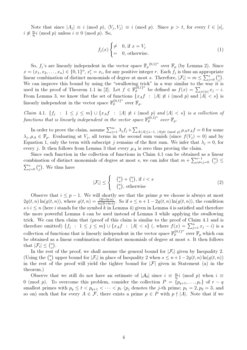 On the maximum number of distinct intersections in an intersecting family

In the first part of this paper, we prove a theorem which is the q-analo...
Rogers Mathew, et al. ∙

The Algebraic Theory of Fractional Jumps

In this paper we start by briefly surveying the theory of Fractional Jum...
Dorian Goldfeld, et al. ∙

Shadowing for families of endomorphisms of generalized group shifts

Let G be a countable monoid and let A be an Artinian group (resp. an Art...
Xuan Kien Phung, et al. ∙

In Section 2.1, we prove the following theorem which gives an upper bound for the cardinality of a fractional L-intersecting family in the general case. We follow the convention that (ab) is 0, when b>a.

Consider the following examples for a fractional L-intersecting family.

Coming back to the classical L-intersecting families, it is known that when F is an L-intersecting family where |L|=s=1, the Fisher’s Inequality (see Theorem 7.5 in [9]) yields |F|≤n. Study of such intersecting families was initiated by Ronald Fisher in 1940 (see [5]). This fundamental result of design theory is among the first results in the field of L-intersecting families. Analogously, consider the scenario when L={ab} is a singleton set. Can we get a tighter (compared to Theorem 1) bound in this case? We show in Theorem 2 that if b is a constant prime we do have a tighter bound.

Assuming L={12}, Examples 3 and 4 in Section 3 give fractional L-intersecting families on [n] of cardinality 3n2−2 thereby implying that the bound obtained in Theorem 2 is asymptotically tight up to a factor of lnn when b is a constant prime. We believe that the cardinality of such families is at most cn, where c>0 is a constant.

The rest of the paper is organized in the following way: In Section 2.1, we give the proof of Theorem 1 after introducing some necessary lemmas in the beginning. In Theorem 6 in Section 2.2, we give an upper bound of n for fractional L-intersecting families on [n] whose member sets are ‘large enough’. In Section 3, we consider the case when L is a singleton set and give the proof of Theorem 2. Later in this section, in Theorem 8, we consider the case when the cardinalities of the sets in the fractional L-intersecting family are restricted. Finally, we conclude with some remarks, some open questions, and a conjecture.

Before we move to the proof of Theorem 1, we introduce a few lemmas that will be used in the proof.

The following lemma is popularly known as the ‘Independence Criterion’ or ‘Triangular Criterion’.

Then f1,…,fm are linearly independent members of the space FΩ.

Arrange every subset of [n] of cardinality less than p in a linear order, say ≺, such that A≺B implies |A|≤|B|. For any two distinct sets A and B, we know that xA(VB)f(VB)=0 when |B|≤|A|, where xA(VB) denote the evaluation of the function xA at VB. Suppose ∑A:|A|≢i  (mod p), |A|<pλAxAf=0 has a non-trivial solution. Then, identify the first set, say A0, in the linear order ≺ for which λA0 is non-zero. Evaluate the functions on either side of the above equation at VA0 to get λA0=0 which is a contradiction to our assumption. ∎

In order to prove the claim, assume ∑mj=1λjfj+∑A:|A|≤s−1, |A|≢i (mod p)μAxAf=0 for some λj,μA∈Fp. Evaluating at Vj, all terms in the second sum vanish (since f(Vj)=0) and by Equation 1, only the term with subscript j remains of the first sum. We infer that λj=0, for every j. It then follows from Lemma 4 that every μA is zero thus proving the claim.

Since each function in the collection of functions in Claim 5.1 can be obtained as a linear combination of distinct monomials of degree at most s, we can infer that m+∑s−1j≠i,j=0 (nj)≤∑sj=0(nj). We thus have

Observe that i≤p−1. We will shortly see that the prime p we choose is always at most 2g(t,n)ln(g(t,n)), where g(t,n)=(2t+lnn)ln(2t+lnn). So if s≤n+1−2g(t,n)ln(g(t,n)), the condition s+i≤n (here i stands for the symbol k in Lemma 5) given in Lemma 5 is satisfied and therefore the more powerful Lemma 5 can be used instead of Lemma 4 while applying the swallowing trick. We can then claim that (proof of this claim is similar to the proof of Claim 5.1 and is therefore omitted) {fj : 1≤j≤m}∪{xAf : |A|<s} (, where f(x)=∑nj=1xj−i) is a collection of functions that is linearly independent in the vector space F{0,1}np over Fp which can be obtained as a linear combination of distinct monomials of degree at most s. It then follows that |Fi|≤(ns).

Observe that we still do not have an estimate of

|A0| since i≡albli (mod p) when i≡0 (mod p). To overcome this problem, consider the collection P={pq+1,…,pr} of r−q smallest primes with pq≤t<pq+1<⋯<pr (pj denotes the j-th prime; p1=2,p2=3, and so on) such that for every A∈F, there exists a prime p∈P with p∤|A|. Note that if we repeat the steps done above for each p∈P, we obtain the following upper bound.

In the following theorem, we show that when the sets in a fractional L-intersecting F are ‘large enough’, then |F| is at most n.

We prove the theorem by proving the following claim.

XA1,…,XAm are linearly independent in the vector space Rn over R.

Assume for contradiction that XA1,…,XAm are linearly dependent in the vector space Rn over R. Then, we have some reals λA1,…,λAm where not all of them are zeroes such that

It is given that, for every Ai∈F, |Ai|>n2. Let u=(1,1,…,1)∈Rn be the all ones vector. Then, ⟨XAi,u⟩>0, for every Ai∈F. Therefore, if all non-zero λAis in Equation (5) are of the same sign, say positive, then the inner product of u with the L.H.S of Equation (5) would be non-zero which is a contradiction. Hence, we can assume that not all λAis are of the same sign. We rewrite Equation (5) by moving all negative λAis to the R.H.S. Without loss of generality, assume λA1,…,λAk are non-negative and the rest are negative. Thus, we have

where v is a non-zero vector.

3 L is a singleton set

It is easy to see that if a=0, then |G|≤n with the set of all singleton subsets of [n] forming a tight example to this bound. So assume a≠0. Let F=G∖H, where H={A∈G : b∤|A|}. From the definition of a fractional ab-intersecting family it is clear that |H|≤1. The rest of the proof is to show that |F|≤(b−1)(n+1)⌈lnnlnb⌉. We do this by partitioning F into (b−1)⌈logbn⌉ parts and then showing that each part is of size at most n+1. We define Fji as

In order to estimate |Fibk−1bk|, for each A∈Fibk−1bk, create a vector XA as follows:

Let |Fibk−1bk|=m. Let Mk,i denote the m×n matrix formed by taking XAs as rows for each A∈Fibk−1bk. Then, |Fibk−1bk|≤n+1 can be proved by considering B=Mk,i×MTk,i and showing that B−aiJ (, where J is the m×m all 1 matrix, ) has full rank; determinant of B−aiJ is non-zero since the only term not divisible by the prime b in the expansion of its determinant comes from the product of all the diagonals (note that a<b, i<b, and since b is a prime, we have b∤ai). ∎

We shall call F a bisection closed family if F is a fractional L-intersecting family where L={12}. We have two different constructions of families that are bisection closed and are of cardinality 3n2−2 on [n].

3.2 Restricting the cardinalities of the sets in F

When L={ab}, where b is a prime, Theorem 2 yields an upper bound of O(blogbnlogn) for |F|. However, we believe that when |L|=1, the cardinality of any fractional L-intersecting family on [n] would be at most cn, where c>0 is a constant. To this end, we show in Theorem 8 that when the sizes of the sets in F are restricted, we can achieve this.

The following lemma is crucial to the proof of Theorem 8.

denote the eigenvalues of

For any A∈F, let YA∈Rn be a vector defined as:

Clearly, ⟨YA,YA⟩=1. For any two distinct sets A,B∈F, we have

Suppose F={A1,…,Am}. Let B be the m×n matrix with YA1,…,YAm as its rows. Then, from Equation 8, it follows that BBT is an m×m real symmetric matrix with the diagonal entries being 1 and the absolute value of any other entry being at most 1δ√n. Applying Lemma 7, we have n≥rk(BBT)≥m1+m−1δ2n><span class="mjx-char MJXc-TeX-math-I" style="padding-to