In this paper, we present a fractional decomposition of the probability generating function of the innovation process of the first-order non-negative integer-valued autoregressive [INAR(1)] process to obtain the corresponding probability mass function. We also provide a comprehensive review of integer-valued time series models, based on the concept of thinning operators, with geometric-type marginals. In particular, we develop four fractional approaches to obtain the distribution of innovation processes of the INAR(1) model and show that the distribution of the innovations sequence has geometric-type distribution. These approaches are discussed in detail and illustrated through a few examples. Finally, using the methods presented here, we develop four new first-order non-negative integer-valued autoregressive process for autocorrelated counts with overdispersion with known marginals, and derive some properties of these models. 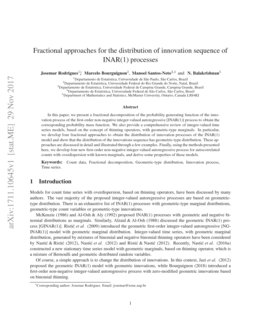 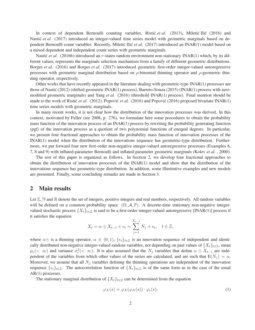 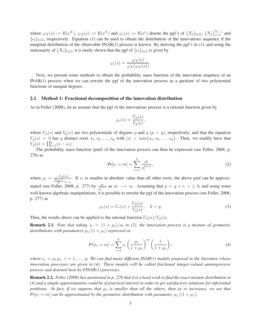 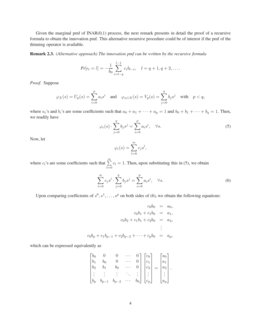 Stationary underdispersed INAR(1) models based on the backward approach

constructed a new stationary time series model with geometric marginals, based on thinning operator, which is a mixture of Bernoulli and geometric distributed random variables.

Of course, a simple approach is to change the distribution of innovations. In this context, Jazi et al.  (2012) proposed the geometric INAR(1) model with geometric innovations, while Bourguignon (2018) introduced a first-order non-negative integer-valued autoregressive process with zero-modified geometric innovations based on binomial thinning.

The rest of this paper is organized as follows. In Section 2, we develop four fractional approaches to obtain the distribution of innovation processes of the INAR(1) model and show that the distribution of the innovations sequence has geometric-type distribution. In addition, some illustrative examples and new models are presented. Finally, some concluding remarks are made in Section 3.

Let Z, N and R denote the set of integers, positive integers and real numbers, respectively. All random variables will be defined on a common probability space  (Ω,A,P). A discrete-time stationary non-negative integer-valued stochastic process {Xt}t∈Z is said to be a first-order integer-valued autoregressive [INAR(1)] process if it satisfies the equation

where α⊙ is a thinning operator, α∈(0,1), {ϵt}t∈Z is an innovation sequence of independent and identically distributed non-negative integer-valued random variables, not depending on past values of {Xt}t∈Z, mean μϵ(<∞)

σ2ϵ(<∞). It is also assumed that the Nj variables that define α⊙Xt−1 are independent of the variables from which other values of the series are calculated, and are such that E(Nj)=α. Moreover, we assume that all Nj variables defining the thinning operations are independent of the innovation sequence {ϵt}t∈Z. The autocorrelation function of {Xt}t∈Z is of the same form as in the case of the usual AR(1) processes.

where φX(s):=E(sX), φN(s):=E(sN) and φϵ(s):=E(sϵ) denote the pgf’s of {Xt}t∈Z, {Nj}Xt−1j=1 and {ϵt}t∈Z, respectively. Equation (1) can be used to obtain the distribution of the innovations sequence if the marginal distribution of the observable INAR(1) process is known. By deriving the pgf’s in (1), and using the stationarity of {Xt}t∈Z, it is easily shown that the pgf of {ϵt}t∈Z is given by

Next, we present some methods to obtain the probability mass function of the innovation sequence of an INAR(1) process when we can rewrite the pgf of the innovation process as a quotient of two polynomial functions of enequal degrees.

As in Feller (2008), let us assume that the pgf of the innovations process is a rational function given by

The probability mass function (pmf) of the innovation process can then be expressed (see Feller, 2008, p. 276) as

Then, the results above can be applied to the rational function Uk(s)/Vq(s).

Note that taking si=(1+μi)/ui in (2), the innovation process is a mixture of geometric distributions with parameters μi/(1+μi) expressed as

where ci=ρiμi, i=1,…,q. We can find many different INAR(1) models proposed in the literature whose innovation processes are given in (4). These models will be called fractional integer-valued autoregressive process and denoted here by FINAR(1) processes.

Feller (2008) has mentioned in p. 276 that it is a hard work to find the exact mixture distribution in (4) and a simple approximation could be of practical interest in order to get satisfactory solutions for inferential problems. In fact, if we suppose that μ1 is smaller than all the others, then as m increases, we see that Pr[ϵt=m] can be approximated by the geometric distribution with parameter μ1/(1+μ1).

Given the marginal pmf of INAR(0,1) process, the next remark presents in detail the proof of a recursive formula to obtain the innovation pmf. This alternative recursive procedure could be of interest if the pmf of the thinning operator is available.

where cl’s are some coefficients such that ∞∑l=0cl=1. Then, upon substituting this in (5), we obtain

Upon comparing coefficients of s0,s1,…,sp on both sides of (6), we obtain the following equations:

which can be expressed equivalently as

which is clearly invertible since b0≠0(b0=Vq(0)>0). Next, upon comparing coefficients of sp+1,sp+2,…,sq on both sides of (6), we get the following equations:

This system of equations can be readily rewritten as follows

which can be expressed equivalently as

Next, upon comparing coefficients of sq+1,sq+2,…,. on both sides of (6), we get the following equations

which readily yields the following solutions:

and in general, we have

As in McKenzie (1985), let us consider the marginal distribution of {Xt}t∈Z to be a geometric distribution with parameter θ∈(0,1) with pmf

The GINAR(1) process is based on the binomial thinning operator (Steutel and Van Harn 1979), α∘Xt−1:=∑Xt−1j=1Yj, where the so-called counting series {Yj}j≥1 is a sequence of independent and identically distributed Bernoulli random variables with Pr(Yj=1)=1−Pr(Yj=0)=α∈[0,1), and satisfies the equation

Thus, the pgf of the innovation processe can be written as

Since we have here two linear functions with p=q=1, upon using a simple algebraic manipulation suggested in (3), the pgf of the innovation process can be rewritten as

In this example, we have shown that the GINAR(1) process is a FINAR(1) process with the polynomial functions U(s) and V(s) having the same degrees p=q=1. By using the rational decomposition in (2) for the fractional function θ(1−α)1−(1−θ)s, it can be seen that the innovation process follows a zero-inflated geometric distribution given by

In this example, we consider the stationary NGINAR(1) process with negative binomial thinning operator, introduced by Ristić et al.  (2009), given by

Thus, the pmf of the innovation sequence is obtained from (2) and is given by

The pmf of the innovation sequence is well defined with the condition α∈[0,μ/(1+μ)] for μ>0 being necessary to guarantee that all probabilities are non-negative, and is undefined for values outside this range. Note that this result was obtained earlier in Ristić et al.  (2009). .

We note that the probability distribution in (

8) is a zero-inflated model involving two geometric distributions. This result is not cleary stated in Theorem 2 of Ristić et al.  (2013).

In this section, we extend the innovation sequence of the geometric INAR(1) process discussed in Example 1. We consider here the a linear fractional probability generating function with four-parameters given by

with the following parametric restrictions: a<c and a+b=c+d. After a simple algebraic manipulation, the pgf in (9) can be decomposed into partial fractions as

where s1=−c/d and ρ=bc/d2−a/d. Following the same procedure as in Feller (2008, p. 276), we obtain an exact expression for the pmf of the innovation sequence as

Note that the two-parameter innovation distribution in Example 1 is deduced by taking b=−(1−θ)α and d=−(1−θ). The mean and the variance of the innovation process in (10) are given by

This Fisher index indicates equidispersion of the innovation process if b=−d, underdispersion if b>−d and overdispersion if b<−d. Note that for b=−d, we have the mean to equal the variance, but the pmf in (10

) is not the classical Poisson distribution.

where r≥0 and m≤r+1. It can be easily seen that the above pgf is a fraction linear function with a=1−r−m, b=m−r, c=1+r and d=−r. For this particular case we have s1=(r+1)/r and b/d=1−m/r. The corresponding two-parameter innovation process is given by

with the parametric restriction −1/μ≤k≤1. It is straightforward to see that the pgf in (11) has a linear representation given by

In this section, we consider the pgf of the innovation process as a quadratic rational function expressed as follows:

Initially, to facilitate the partial fraction decomposition, we have to reduce the degree of the polynomial function in the numerator of (12) by using a simple algebraic manipulation. Thus, we obtain a new expression for the pgf as

In order to obtain the innovation distribution, from here on, we assume that s2≥s1>1. The rational function U1(s)(s−s1)(s−s2) in (13) can now be decomposed into partial fractions (see Feller, 2008) and the pgf of the innovation variable can be rewritten as

Using the same geometric expansion for 1s1−s and 1s2−s as in Feller (2008), the pmf of the innovation sequence is obtained as

Since in (14) the zeros come from the Bernoulli process with parameter π and the nonzeros come from a different process characterized by a mixture of two geometric distributions, it may be referred to as “hurdle-fractional geometric innovation distribution” and denoted by HFG. The mean and the variance of the innovation process in (14) are given by

In this example, we present a new stationary first-order non-negative integer valued autoregressive process, {Xt}t∈Z, with inflated-parameter geometric (Kolev et al. , 2000) marginals. The proposed process is based on the binomial thinning operator and satisfies the equation:

with α∈[0,1) and {Xt}t∈Z being a stationary process with inflated-parameter geometric marginals, i.e., with pmf given by

The mean and variance of the process {Xt}t∈Z are given, respectively, by