Multi-face alignment aims to identify geometry structures of multiple human face in a image, and its performance is important for the many practical tasks, such as face recognition, face tracking and face animation. In this work, we present a fast bottom-up multi-face alignment approach landmark detection approach, which can simultaneously localize multi-person facial landmarks with high precision. In more detail, unlike previous top-down approach, our bottom-up architecture maps the landmarks to the high-dimensional space. Then, the discriminative high-dimensional features are aggregated to represent the landmarks. By clustering the features belonging to the same face, our approach can align the multi-person facial landmarks synchronously. Extensive experiments are conducted in this paper, and the experimental results demonstrate that our method can achieve the high performance in the multiface landmark alignment task while our model is extremely fast. Moreover, we propose a new multi-face dataset to compare the speed and precision of bottom-up face alignment method. Our dataset is publicly available at https://github.com/AISAResearch/FoxNet 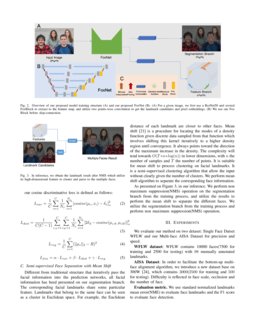 Sub-pixel face landmarks using heatmaps and a bag of tricks

Caricature is an artistic abstraction of the human face by distorting or...
Juyong Zhang, et al. ∙

The Active Shape Model (ASM) is one of the most popular local texture mo...
Thai Hoang Le, et al. ∙

Deep learning has made great progress in recent days; one of the most compelling achievements is the application of computer vision. Multi-face alignment, also known as multiple facial landmarks localization or detection, aims to identify the locations of the key points of multiple faces on images or videos.

Multi-face alignment task can be grouped into bottom-up and top-down approaches. For a long time in academia and industry, people have employ a top-down method, face detection first and then send to single face alignment network. Conventional single face alignment methods  [1, 2, 3, 4, 5] can be divided into directly or indirectly generating landmarks [6]. The time complexity of NMS and Soft NMS [7] is O(n2), which is the most critical deficiency of the top-down method. After that, the results of NMS or Soft NMS  [7]are sent to the single face detection network [8, 9, 10, 11, 12]. For this process, the time complexity is O(n). What is worse, traditionally, the single face detection networks have a very deep convolution structure. Repeated use of convolutional networks to infer images can greatly slow down the entire structure. Once the number of faces increases, the speed will be greatly sacrificed.

So, it is important to develop a bottom-up structure for multi-face alignment task. Some bottom-up human pose estimation algorithms

[15, 16, 14] use Part Affinity Fields and a greedy parse to resolve individual. Inspired by that, our multi-face bottom-up method can be divided into two steps [14]: first finding out all possible face landmarks, and then parsing the discrete key points into individuals. Since this method is based on the entire image, it needs to overlook global texture information. Therefore, compared with the algorithm for detection and NMS, this algorithm is more robust to occlusion. Last but not least, this method is independent of the number of faces. In the multi-face alignment task, bottom-up approaches will have a large margin than the top-down method in speed.

In this paper, we present a bottom-up algorithm that iteratively parses out a single face using global semantic segmentation information. While our face task does not have clear connection like the limbs [14], pixel embedding [17] learns implicit features to obtain corresponding spatial feature relationships. which compared with the top-down method which the detected faces are cyclically sent to the single-face landmarks network.

In conclusion, our main contributions are threefold.

Figure. 1A illustrates our bottom-up method. The method takes an RGB image of size w×h and generates the landmarks and corresponding faces. The FoxNet simultaneously predicts the landmark candidates C, at the segmentation branch, and their high-dimensional features F which encode spatial information, at the feature branch. As shown in Figure. 3, features, which combine the non-maximum suppression result of segmentation branch, utilize cluster algorithm to produce multiple face landmarks.

In our proposed networks, FoxNet, as illustrated in Figure 1 B., the first stage would produce a set of abstract feature S1=h(I), where h are the head of FoxNet (e.g., ResNet [18]). Moreover, in each subsequent stage, the block inherits multiscale information in the previous stage to produce more robust features St=Fox(St−1). At the end, two point-wise convolution of different the number of channel generate segmentation result C=d1(St) and feature result F=dn(St), where d is the depth-wise convolution and n is the numebr of channel of them. In order to fully utilize the facial multi-scale information, we view Hourglass [19] as our backbone. Therefore, we designed a Fox Block that can blend multi-resolution identified features on the same scale.

, of average pooling, which stride is

1 to protect original resolution. During inference, feature branch classifies landmark candidates come from segmentation branch. However, during training time, as shown in Equation 1, we make all facial pixel participated in the calculation to study more identified features.

where I is the input image, P is pixel belonging to the face, T is corresponding classification labels, and L is our cosine loss.

To localize the landmark, the global information of the images is required. So we proposed to use Fox Block to have a larger receptive field in our proposed model.

is a differentiable transform which maps each image pixels to high-dimensional vector for better classification. The objective of our loss function is to increase the inter-class distance and minimize the intra-class distance. Discriminative loss

[17] has made great success in semantic segmentation field which enforces the network to map each pixel in the image to an n-dimensional vector in feature space. However, we viewed that introducing the cosine loss takes the normalized features as input to learn highly discriminative features by maximizing the inter-class cosine margin could utilize the cosine-related discriminative information well. [17]

uses variance term to force embeddings to close the cluster center, distance term to push away the cluster centers from each other and regularization to pull all embeddings to the origin. We inherit three-terms, but replace the Euclidean distance with cosine distance and change the pull to the push. In our task, we only need the orientation of embedding to obtain the discriminative features. As shown in figure.

1A, our segmentation predicts the landmark candidates who have more precise semantic information than the length of embedding who represent the response of landmark on a feature branch. If we use regularization term, in discriminative loss, forcing embeddings of different length into the origin, the surface area of the characteristic hypersphere will too small to classify. Inspired by [20], we put embeddings to a hypersphere with extensive surface area which can learn better distribution and normalization to cluster.

In cosine discriminative loss, regularization term force embeddings of the different norm into the origin, which make the surface area of the characteristic hypersphere shrank. The details of our proposed Fox Loss is illustrate in Equation 5 to maximizing inter-class variance and minimizing intra-class variance. It has integrated Equation 2 to 4. The variance term(Lvar) is an intra-cluster pull-force that draws embeddings towards the mean embedding which has presented in Equation 2. The distance term is an inter-cluster push-force that pushes clusters away from each other, increasing the distance between the cluster centers which has presented in Equation 3. The regularization term is a small pull-force that draws all clusters towards the origin, to keep the activations bounded which has presented in Equation 4. In the equations, the definitions are as follows: C is the number of clusters in the ground truth, Nc is the number of elements in cluster c, xi is an embedding, μc is the mean embedding of cluster c (the cluster center), cosine(a,b) is the cosine loss between a and b, which could also be noted as a⋅b||a||⋅||b||. [x]+=max(0,x) denotes the hinge. δv and δd are respectively the margins for the variance and distance loss.

our cosine discriminative loss is defined as follows:

Different from the traditional structure that iteratively passes the facial information into the prediction networks, all facial information has been presented on our segmentation branch. The corresponding facial landmarks share some particular feature. Landmarks that belong to the same face can be seen as a cluster in Euclidean space. For example, the Euclidean distance of each landmark is closer to other faces. Mean shift [21] is a procedure for locating the modes of a density function given discrete data sampled from that function which involves shifting this kernel iteratively to a higher density region until convergence. It always points toward the direction of the maximum increase in the density. The complexity will tend towards O(T∗n∗log(n)) in lower dimensions, with n the number of samples and T the number of points. It is suitable for a mean shift to process clustering on facial landmarks. It is a semi-supervised clustering algorithm that allows the input without given the number of clusters. We perform a mean shift algorithm to separate the corresponding face information.

We evaluate our method on two datasets: Single Face Dataset WFLW and our Multi-face AISA Dataset for precision and speed.

AISA Dataset: In order to facilitate the bottom-up multi-face alignment algorithm, we introduce a new dataset base on 300W [24], which contains 3000(2500 for training and 500 for testing). The difficulty is reflected in face scale, occlusion and the number of faces.

We compare our method against the state-of-the art methods, ESR [22], CFSS [23] and LAB [6], on WFLW. The result is shown in Table I which comes from segmentation branch using NMS.

Our method achieves 5.80% on the test set and higher than LAB, while better on Occlusion and Blur subset. This margin shows that our method has a larger receptive field to obtain more global features.

Top-down multi-face alignment method contains detection and single face alignment, so we compare our approach with these two steps, respectively. As shown in Table  II,

To analyze the runtime performance of our method, we uniformly resize to 640×640 during test time to fit GPU memory. The runtime analysis is performed on a single NVIDIA GeForce GTX-1080ti GPU. We perform face detection SSH [26] and two single face DAN [27] and LAB as a top-down comparison, where the runtime is roughly proportional to the number of people in an image. The results are illustrated in Fig. 4. In our approach, we only took 51.50ms to process the single face landmark detection task while the baseline experiments that perform on SSH+LAB and MTCNN+LAB would take 127.34ms and 177.259ms. Compared to the other two methods, the slope of our proposed method is minimal(to be more precise, our slope is 2.06 and the slope of the other two is 71.65 (SSH+LAB) and 71.83 (MTCNN+LAB).). It is obvious our proposed method is not only the fastest in single face alignment task but is increases relatively slowly with the increasing number of people. The runtime consists of two major parts:

All models are implemented using PyTorch

[28] and trained on a GPU server with 8 NVIDIA GTX 1080Ti GPU. The training details here are all similar to that in [6]. To facilitate future research and clarify the details. Some important training details are as follows:

We have developed an extremely fast structure that develops the multi-face alignment task. It is the first bottom-up structure on this task.

In our approach, we first proposed the use of the FoxNet structure to solve the problem of receptive field defects. Moreover, we use Fox Block to provide additional contextual information that may be needed for facial landmark detection. In our approach, we have achieved a high-speed bottom-up solution and maintain most of the accuracy. The approach is an algorithm that is independent of the number of people to be detected which could be applied on large-scale real-time facial alignment task.

This reseach was supported in part by the National Key Technology R&D Program of China (2017YFD0301506) and the Hunan Province innovative experiment and reseach study program for college student (SCX1822).