We introduce conformal mixed finite element methods for 2D and 3D incompressible nonlinear elasticity in terms of displacement, displacement gradient, the first Piola-Kirchhoff stress tensor, and pressure, where finite elements for the curl and the div operators are used to discretize strain and stress, respectively. These choices of elements follow from the strain compatibility and the momentum balance law. Some inf-sup conditions are derived to study the stability of methods. By considering 96 choices of simplicial finite elements of degree less than or equal to 2 in 2D and 3D, we conclude that 28 choices in 2D and 6 choices in 3D satisfy these inf-sup conditions. The performance of stable finite element choices are numerically studied. Although the proposed methods are computationally more expensive than the standard two-field methods for incompressible elasticity, they are potentially useful for accurate approximations of strain and stress as they are independently computed in the solution process. 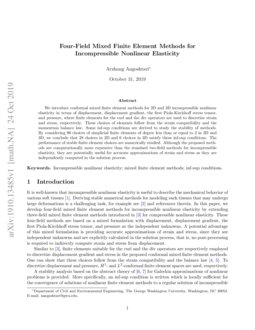 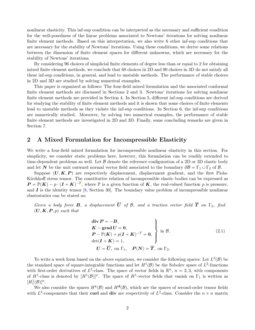 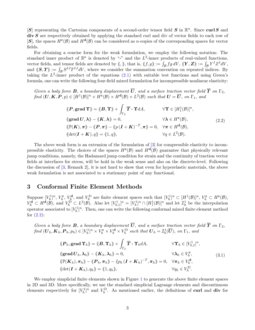 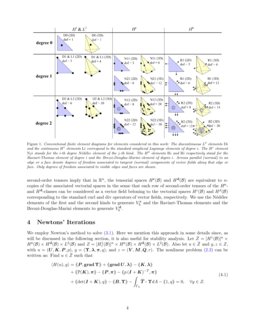 In this work we propose a stochastic model for estimating the occurrence...
Ivo Babuska, et al. ∙

It is well-known that incompressible nonlinear elasticity is useful to describe the mechanical behavior of various soft tissues [1]. Deriving stable numerical methods for modeling such tissues that may undergo large deformations is a challenging task, for example see [2] and references therein. In this paper, we develop four-field mixed finite element methods for incompressible nonlinear elasticity by extending three-field mixed finite element methods introduced in [3] for compressible nonlinear elasticity. These four-field methods are based on a mixed formulation with displacement, displacement gradient, the first Piola-Kirchhoff stress tensor, and pressure as the independent unknowns. A potential advantage of this mixed formulation is providing accurate approximations of strain and stress, since they are independent unknowns and are explicitly calculated in the solution process, that is, no post-processing is required to indirectly compute strain and stress from displacement.

A stability analysis based on the abstract theory of [6, 7] for Galerkin approximations of nonlinear problems is provided. More specifically, an inf-sup condition is written which is locally sufficient for the convergence of solutions of nonlinear finite element methods to a regular solution of incompressible nonlinear elasticity. This inf-sup condition can be interpreted as the necessary and sufficient condition for the well-posedness of the linear problems associated to Newtons’ iterations for solving nonlinear finite element methods. Based on this interpretation, we also write 6 other inf-sup conditions that are necessary for the stability of Newtons’ iterations. Using these conditions, we derive some relations between the dimension of finite element spaces for different unknowns, which are necessary for the stability of Newtons’ iterations.

By considering 96 choices of simplicial finite elements of degree less than or equal to 2 for obtaining mixed finite element methods, we conclude that 68 choices in 2D and 90 choices in 3D do not satisfy all these inf-sup conditions, in general, and lead to unstable methods. The performance of stable choices in 2D and 3D are studied by solving numerical examples.

2 A Mixed Formulation for Incompressible Elasticity

We write a four-field mixed formulation for incompressible nonlinear elasticity in this section. For simplicity, we consider static problems here, however, this formulation can be readily extended to time-dependent problems as well. Let B denote the reference configuration of a 2D or 3D elastic body and let N

be the unit outward normal vector field associated to the boundary

Suppose (U,K,P) are respectively displacement, displacement gradient, and the first Piola-Kirchhoff stress tensor. The constitutive relation of incompressible elastic bodies can be expressed as P=P(K)−p⋅(I+K)−T, where P is a given function of K, the real-valued function p is pressure, and I is the identity tensor [8, Section 30]. The boundary value problem of incompressible nonlinear elastostatics can be stated as:

To write a week form based on the above equations, we consider the following spaces: Let L2(B) be the standard space of square-integrable functions and let H1(B) be the Sobolev space of L2-functions with first-order derivatives of L2-class. The space of vector fields in Rn, n=2,3, with components of H1-class is denoted by [H1(B)]n. The space of H1-vector fields that vanish on Γ1 is written as [H11(B)]n.

We also consider the spaces Hc(B) and Hd(B), which are the spaces of second-order tensor fields with L2-components that their curl and div are respectively of L2-class. Consider the n×n matrix [S] representing the Cartesian components of a second-order tensor field S in Rn. Since curlS and divS are respectively obtained by applying the standard curl and div of vector fields to each row of [S], the spaces Hc(B) and Hd(B) can be considered as n-copies of the corresponding spaces for vector fields.

For obtaining a concise form for the weak formulation, we employ the following notation: The standard inner product of Rn is denoted by “⋅” and the L2-inner products of real-valued functions, vector fields, and tensor fields are denoted by \llangle,\rrangle, that is, \llanglef,g\rrangle:=∫BfgdV, \llangleY,Z\rrangle:=∫BYIZIdV, and \llangleS,T\rrangle:=∫BSIJTIJdV, where we consider the summation convention on repeated indices. By taking the L2-inner product of the equations (2.1) with suitable test functions and using Green’s formula, one can write the following four-field mixed formulation for incompressible nonlinear elasticity:

The above weak form is an extension of the formulation of [3] for compressible elasticity to incompressible elasticity. The choices of the spaces Hc(B) and Hd(B) guarantee that physically relevant jump conditions, namely, the Hadamard jump condition for strain and the continuity of traction vector fields at interfaces for stress, will be hold in the weak sense and also on the discrete-level. Following the discussion of [3, Remark 2], it is not hard to show that even for hyperelastic materials, the above weak formulation is not associated to a stationary point of any functional.

be the interpolation operator associated to

We employ simplicial finite elements shown in Figure 1 to generate the above finite element spaces in 2D and 3D. More specifically, we use the standard simplicial Lagrange elements and discontinuous elements respectively for [V1h]n and VDh. As mentioned earlier, the definitions of curl and div for second-order tensors imply that in Rn, the tensorial spaces Hc(B) and Hd(B) are equivalent to n-copies of the associated vectorial spaces in the sense that each row of second-order tensors of the Hc- and Hd-classes can be considered as a vector field beloning to the vectorial spaces Hc(B) and Hd(B) corresponding to the standard curl and div operators of vector fields, respectively. We use the Nédélec elements of the first and the second kinds to generate Vch and the Raviart-Thomas elements and the Brezzi-Douglas-Marini elements to generate Vdh.

where the bilinear form b(⋅,⋅;ui) is given by

where A(K) is the elasticity tensor in terms of the displacement gradient and (A(K):M)IJ:=AIJRSMRS. By discretizing the linear problem (4.2) using the finite element spaces of the previous section, one obtains the following Newton’s iteration for the finite element method (3.1):

and let nt=n1+nc+nd+nD, denote the total number of degrees of freedom. Then, it is straightforward to see that the stiffness matrix of the above linear problem is of the form

The stability of the nonlinear finite element method (3.1) can be studied by using the general theory for the Galerkin approximation of nonlinear problems discussed in [6, 7]. Let u=(U,K,P,p) be a regular solution of (2.3), or equivalently (4.1), in the sense that the derivative of the nonlinear mapping H defined in (4.1) is nonsingular at u. This derivative can be expressed in terms of the bilinear form b(⋅,⋅;u) introduced in (4.3). The theory of [6, 7] states that in a neighborhood of u and for sufficiently refined meshes with the maximum element diameter h>0, under some additional mild conditions, the nonlinear finite element method (3.1) has a unique solution uh=(Uh,Kh,Ph,ph) that converges to u as h→0 if there exists a mesh-independent number α>0 such that

where Zh is the mixed finite element space for the Newton’s iteration (4.4) and ∥⋅∥Z is the norm of Z. Thus, the inf-sup condition (5.1) is a sufficient stability condition.

The condition (5.1) can be interpreted as a stability condition for the linear finite element method of the Newton’s iteration (4.4) as well. More specifically, suppose that at the (i−1)-th Newton’s iteration, we have u≈uih. Then, the condition (5.1) implies that the linear problem (4.4) at the the i-th iteration has a unique solution and the stiffness matrix S introduced in (4.6) is non-singular. One can also approximate the lower bound α of (5.1) by using a matrix associated to S [9, Proposition 3.4.5]. In particular, α

can be approximated by the smallest singular value of the matrix

MSM, where M is the symmetric, positive definite matrix associated to the norm ∥⋅∥Z.

must be full rank. This result can be stated by using some inf-sup conditions associated to suitable bilinear forms induced by (4.4). The upshot can be stated as follows:

A simple inspection of the number of rows and columns of the above matrices together with the rank-nullity theorem yield the following necessary condition for the validity of (5.1) and the well-posedness of (4.4), where we use the notation of (4.5).

By using this result, one can specify some unstable combinations of finite elements. For example, consider the 2D elements of Figure 1 and suppose Nv, Ned, and Nel are respectively the number of vertices, edges, and elements of a 2D simplicial mesh. One can write the relations

where I is the number of holes and N∂ed is the number boundary edges [10]. By using the notation of Figure 1, we obtain the following relations on a 2D simplicial mesh:

A simple varification of the inequalities of Theorem 1 by using the relations (5.18) and (5.19) yields the following result.

Some numerical examples are discussed in this section to study the stability and the convergence of the mixed finite element methods (3.1). We consider the simplicial finite elements of Figure 1 and use FEniCS [11] to implement these numerical examples. The underlying domains are assumed to be a unit square in 2D and a unit cube in 3D with simplicial meshes shown in Figure 2. We consider incompressible Neo-Hookean materials with the stored energy function W(F)=μ2(trFTF−3), μ>0, and the constitutive equation

The inf-sup conditions introduced earlier hold only if the corresponding matrices are full rank. Therefore, a simple approach for computationally studying these inf-sup conditions is to compute the rank deficiency of the matrices S1d, SDc, B, C, D, E. Some choices of finite elements that violate these inf-sup conditions are shown in Figure 3. In this figure, the full-rankness of the above matrices are plotted for several choices of finite elements by using 2D and 3D meshes of Figure 2, where the full-rankness FR(M) of a matrix M is the rank of M divided by its maximum possible rank. Thus, FR(M)=1, if M is full rank and FR(M)<1, otherwise.

The results of Figure 3 are computed using the incompressible Neo-Hookean constitutive equation (6.1) with μ=1 near the reference configuration, that is, the matrices are associated to the first Newton’s iteration (4.4) starting at the reference configuration. The rank deficiency of some finite elements such as L2R1 for S1d, N11D2 for SDc, L2N11R2D0 for C, and L1N22D1 for D, is a simple consequence of the number of columns of the associated submatrix being smaller than the number of its rows as mentioned in Theorem 1. For some finite elements such as L2N11R2D0 for C, the associated submatrix is nearly square and as shown in Figure 3, it is also nearly full rank. In this situation, the so-called locking phenomena may occur in the sense that the associated submatrix may represent an injective operator, and thus, it only admits a unique solution.