Forward Vehicle Collision Warning (FCW) is one of the most important functions for autonomous vehicles. In this procedure, vehicle detection and distance measurement are core components, requiring accurate localization and estimation. In this paper, we propose a simple but efficient forward vehicle collision warning framework by aggregating monocular distance measurement and precise vehicle detection. In order to obtain forward vehicle distance, a quick camera calibration method which only needs three physical points to calibrate related camera parameters is utilized. As for the forward vehicle detection, a multi-scale detection algorithm that regards the result of calibration as distance priori is proposed to improve the precision. Intensive experiments are conducted in our established real scene dataset and the results have demonstrated the effectiveness of the proposed framework. 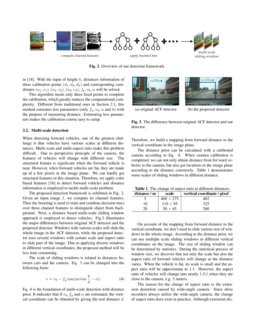 Significant effort has been made on the safety of road vehicles in recent decades. Over 10 million people are injured yearly worldwide in road accidents. Automatic driving and assistance driving are the research directions to increase the safety of passengers and of vehicles. Forward vehicle collision warning is the fundamental function in both automatic driving and assistance driving.

A range of devices mounted on the vehicle could provide the solution to this problem [1, 2]. The traditional systems available today are typically based on radar sensors [3]. However, the narrow field of view and the poor lateral resolution limit the performance of these systems. From a technological point of view, fusion of radar and vision information is an attractive approach. In such a system [4, 5] the radar provides accurate distance and velocity, while vision gets exact locations of forward vehicles. However, this solution is expensive and complex in practical applications.

The rest of this paper is organized as follows. Section 2 introduces the related work and Section 3 describes the proposed framework. Experimental results are demonstrated in Section 4 while conclusion is presented in Section 5.

Camera calibration has been studied extensively in computer vision and photogrammetry. According to the dimension of the calibration object, calibration methods can be roughly classified into two categories as follows:

object-based calibration. Techniques in this category are required to observe a calibration object [6, 7, 8, 9, 10]. Some of these methods [6, 7] require the geometry information of object in 3D space with very good precision. These approaches always need an expensive calibration apparatus, and a complex setup. Therefore, some methods calibrate camera by observing a planar pattern shown at a few different orientations [8, 9]. Since such a calibration pattern is easy to be made, the setup becomes easier. In order to make calibration easier, Zhang [10] proposes one-dimensional object based calibration. It uses less knowledge of the observation compared to 2D and 3D object-based calibration methods.

Considering the practical applications, deep learning methods will not be reviewed in this section. Vehicle detection approaches are mainly divided into two types : template-based and appearance-based.

Template-based methods. Methods in this category apply predefined patterns from the vehicle class and perform correlation between the image and the template. Li et al. [12] propose an And-Or model that integrates context and occlusion for detecting vehicles. Felzenszwalb et al. [13] propose deformable part models to structure template model. Each model is composed of parts with different viewpoints. They detect vehicles by integrating various parts of vehicles. Wang et al. [14] also propose a probabilistic inference framework based on part models for improving detection performance. Since these methods detect vehicles by matching template, they are time consuming.

Appearance-based methods. Appearance-based methods learn the features of vehicles from a set of training images which should capture the variability in vehicle appearance. Usually, appearance models treat a two-class pattern classification problem: vehicle and nonvehicle. Zheng et al. [15] design image strip features based on the vehicle structure for vehicle detection. Since features come from the side view of the vehicle, this detector is sensitive to the viewpoint. Dollar et al. [16] propose aggregate channel features (ACF) and Yuan et al. [17] improve the features for detection. ACF utilizes color information of the objects to improve the performance.

As mentioned before, the proposed framework includes two stages: camera calibration and vehicle detection. To simplify the calibration course, a point-based calibration method [18] is employed to get camera parameters and to calculate distance from the forward car. During the detection course, we expand original ACF detector [16] into a distance-based multiple scale detector. The distance is not only used for forward collision warning, but also employed for improving vehicle detection.

Camera calibration is a necessary step in distance measuring with monocular vision. In engineering practice, the object distances are usually considerably larger than the focal length of camera. Hence, the pinhole camera model can be used to measure the distance. The geometry relationship of actual point P on the ground and its projection point on the image plane P1 is shown in Fig 1(a). According to [19], the distance from point P to camera is:

In theory, as the corresponding pixel location of (x0,y0), (u0,v0) usually locates in the center of image. But in fact, there might be slight departure due to fabrication. In that case, u0 and v0 need to be measured. So, Eq. 1 can be expressed as

Here, fy=f/dy. Hence, we can get the distance d by solving the ratio fy rather than calculating the optical length and pixel physical dimension separately. In practice, the height of camera h can be measured after the camera is mounted on the car. Only fy,v0,α need to be calibrated. Based on Eq. 3, three fixed points are utilized to estimate camera parameters in [18]. With the input of height h, distances information of three calibration points (d1,d2,d3) and corresponding coordinates (u1,v1),(u2,v2),(u3,v3), fy,v0,α will be solved.

This algorithm needs only three fixed points to complete the calibration, which greatly reduces the computational complexity. Different from traditional ones in Section 2.1, this method estimates less parameters (only fy,v0,α and h) with the purpose of measuring distance. Estimating less parameters makes the calibration course easy to setup.

The proposed detection framework is exhibited in Fig. 2. Given an input image I

, we compute its channel features. Then the boosting is used to train and combine decision trees over these channel features to distinguish object from background. Next, a distance based multi-scale sliding window approach is employed to detect vehicles. Fig.

The scale of sliding windows is related to distances between cars and the camera. Eq. 3 can be changed into the following form:

The distance prior can be calculated with a calibrated camera according to Eq. 4. When camera calibration is completed, we can not only obtain distance from for ward vehicles to the camera, but also get locations in the image plane according to the distance conversely. Table 1 demonstrates some scales of sliding windows in different distance.

On account of the mapping from forward distance to the vertical coordinate, we don’t need to slide various size of windows in the whole image. According to the distance prior, we can use multiple scale sliding windows in different vertical coordinates on the image. The size of sliding window can be determined by statistics. During the statistical process of window size, we discover that not only the scale but also the aspect ratio of forward vehicles will change as the distance varies. When the vehicle is far, its scale is small and the aspect ratio will be approximate to 1:1. However, the aspect ratio of vehicles will change into nearly 1.5:1 when they are close to the camera, e.g. 5 meters.

To demonstrate the capabilities of the presented approach, extensive experiments are conducted and evaluated in an Intel i5 quad core CPU with 3.20GHz. In this section, we will introduce the experiment from the following two aspects: calibration and detection.

In our experiment, the images comes from the camera of ordinary driving recorder and its size is 1280×720. The height of the camera is 122.5cm, and three fixed points used for the calibration are 4m, 5m and 7m away from the camera. Their vertical coordinate are 461, 428, 383. Following the calibration steps mentioned in Section 3.1, we obtain camera parameters for measuring distance. The calibration results are α=0.1194rad,fy=1094.313 and v0=363.331. Then a set of test cars are substituted into the algorithm to detect its measurement error. The estimated distance is denoted by d′. The absolute error and relative error can be expressed separately as e∗=|d−d′| and er=e∗/d. The measuring results are demonstrated in Table 2.

As illustrated in Table 2, this algorithm performs well when the points are near, and relative errors increase with the distance becomes far. This is because that along with the object getting farther, one pixel on the image covers longer distance. In other words, if one pixel represents several centimeters in the near, it may represent several meters in the far distance. It is an inherent defect of monocular vision.

4.2 Validation of distance based detection

In order to illustrate the performance of the proposed detection method, comparisons are made between our detector and [20, 12, 21, 16]. All of these methods are trained by KITTI car detection dataset [22] and tested on 5400 images of real scene collected by ourselves. The test images come from 30 different driving videos taken by the same recorder. These videos cover urban road, highway, night, rainy and other situations. Each video is 3 minutes with 30 fps, and test images are selected every one second. Considering the limitation of computing resource in the practical application, deep learning methods will not be compared in this section.

Table 3 shows the comparisons of detection rate and FPPI (false positive per image). Benefiting from distance prior, our detector has the knowledge of vehicle size in different vertical coordinates. FPPI decreases obviously, which means less false detection occurs during our framework. Because we have certain scales in different vertical coordinates, our detector performs better. Besides, certain scales also decrease the number of sliding windows. It also makes the proposed detector faster than others.

Our multi-scale detection framework can achieve 50 frames per second on CPU, which can meet the requirements of other automatic driving and assistance driving applications besides forward vehicle collision warning in the future.

In conclusion, we propose a simple but efficient forward vehicle collision warning framework by aggregating monocular distance measurement and precise vehicle detection. Point based calibrating algorithm greatly reduces the computational complexity and can be easily achieved. Multi-scale detection has taken excellent advantage of distance prior to improves accuracy and decrease time consumption. The processing speed of the proposed framework can achieve 50 fps on CPU and the experiments have exhibited its outstanding performance.