This paper is a sequel of "Forward Analysis for WSTS, Part I: Completions" [STACS 2009, LZI Intl. Proc. in Informatics 3, 433-444] and "Forward Analysis for WSTS, Part II: Complete WSTS" [Logical Methods in Computer Science 8(3), 2012]. In these two papers, we provided a framework to conduct forward reachability analyses of WSTS, using finite representations of downwards-closed sets. We further develop this framework to obtain a generic Karp-Miller algorithm for the new class of very-WSTS. This allows us to show that coverability sets of very-WSTS can be computed as their finite ideal decompositions. Under natural assumptions on positive sequences, we also show that LTL model checking for very-WSTS is decidable. The termination of our procedure rests on a new notion of acceleration levels, which we study. We characterize those domains that allow for only finitely many accelerations, based on ordinal ranks. 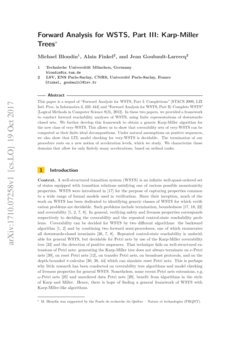 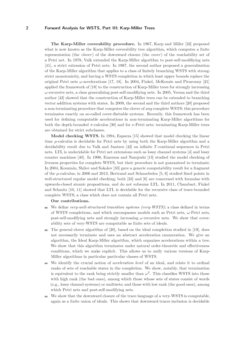 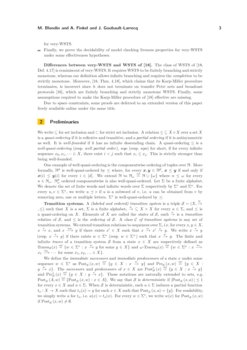 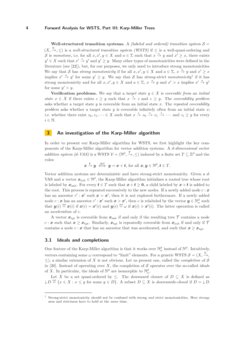 Sparse Tiling through Overlap Closures for Termination of String Rewriting

Recursion Schemes, the MSO Logic, and the U quantifier

We study the model-checking problem for recursion schemes: does the tree...
Paweł Parys, et al. ∙

A Supervisory Control Algorithm Based on Property-Directed Reachability

We present an algorithm for synthesising a controller (supervisor) for a...
Koen Claessen, et al. ∙

We consider the problem of automatically verifying that a parameterized ...
Ondrej Lengal, et al. ∙

A century ago, discoveries of a serious kind of logical error made separ...
Arthur Charlesworth, et al. ∙

A well-structured transition system (WSTS) is an infinite well-quasi-ordered set of states equipped with transition relations satisfying one of various possible monotonicity properties. WSTS were introduced in [Fin87] for the purpose of capturing properties common to a wide range of formal models used in verification. Since their inception, much of the work on WSTS has been dedicated to identifying generic classes of WSTS for which verification problems are decidable. Such problems include termination, boundedness [Fin87, Fin90, FPS01] and coverability [ACJT96, ACJT00, BFM17, BFM18]. In general, verifying safety and liveness properties corresponds respectively to deciding the coverability and the repeated control-state reachability problems. Coverability can be decided for WSTS by two different algorithms: the backward algorithm [ACJT96, ACJT00] and by combining two forward semi-procedures, one of which enumerates all downwards-closed invariants [GRB06, BFM17, BFM18]. Repeated control-state reachability is undecidable for general WSTS, but decidable for Petri nets by use of the Karp-Miller coverability tree [KM67] and the detection of increasing sequences. That technique fails on well-structured extensions of Petri nets: generating the Karp-Miller tree does not always terminate on ν-Petri nets [RMdF11], on reset Petri nets [DFS98], on transfer Petri nets, on broadcast protocols, and on the depth-bounded π-calculus [HMM14, RM12, ZWH12] which can simulate reset Petri nets. This is perhaps why little research has been conducted on coverability tree algorithms and model checking of liveness properties for general WSTS. Nonetheless, some recent Petri nets extensions, ω-Petri nets [GHPR15] and unordered data Petri nets [HLL+16], benefit from algorithms in the style of Karp and Miller. Hence, there is hope of finding a general framework of WSTS with Karp-Miller-like algorithms.

In 1967, Karp and Miller [KM67] proposed what is now known as the Karp-Miller coverability tree algorithm, which computes a finite representation (the clover) of the downward closure (the cover) of the reachability set of a Petri net. In 1978, Valk extended the Karp-Miller algorithm to post-self-modifiying nets [Val78], a strict extension of Petri nets. In 1987, the second author proposed a generalization of the Karp-Miller algorithm that applies to a class of finitely branching WSTS with strong-strict monotonicity, and having a WSTS completion in which least upper bounds replace the original Petri nets ω-accelerations [Fin87, Fin90]. In 2004, Finkel, McKenzie and Picaronny [FMP04] applied the framework of [Fin90] to the construction of Karp-Miller trees for strongly increasing ω-recursive nets, a class generalizing post-self-modifiying nets. In 2005, Verma and the third author [VG05]

showed that the construction of Karp-Miller trees can be extended to branching vector addition systems with states. In 2009, the second and the third authors

In 1994, Esparza [Esp94] showed that model checking the linear time μ-calculus is decidable for Petri nets by using both the Karp-Miller algorithm and a decidability result due to Valk and Jantzen [VJ85] on infinite T-continual sequences in Petri nets. LTL is undecidable for Petri net extensions such as lossy channel systems [AJ94] and lossy counter machines [Sch10]. In 1998, Emerson and Namjoshi [EN98] studied the model checking of liveness properties for complete WSTS, but their procedure is not guaranteed to terminate. In 2004, Kouzmin, Shilov and Sokolov [KSS04] gave a generic computability result for a fragment of the μ-calculus; in 2006 and 2013, Bertrand and Schnoebelen [BBS06, BS13] studied fixed points in well-structured regular model checking; both [KSS04] and [BS13] are concerned with formulas with upwards-closed atomic propositions, and do not subsume LTL. In 2011, Chambart, Finkel and Schmitz [CFS11, CFS16] showed that LTL is decidable for the recursive class of trace-bounded complete WSTS; a class which does not contain all Petri nets.

1.5. Differences between very-WSTS and WSTS of [Fin90]

We write ⊆ for set inclusion and ⊂ for strict set inclusion. A relation ≤ ⊆X×X over a set X is a quasi-ordering if it is reflexive and transitive, and a partial ordering if it is antisymmetric as well. It is well-founded if it has no infinite descending chain. A quasi-ordering ≤ is a well-quasi-ordering (resp. well partial order), wqo (resp. wpo) for short, if for every infinite sequence x0,x1,⋯∈X, there exist i<j such that xi≤xj. This is strictly stronger than being well-founded.

The successors and predecessors of x∈X are

These notations are naturally extended to sets, \ssuccA[w]\defeq⋃x∈A\ssuccx[w].

3. An investigation of the Karp-Miller algorithm

Let X be a set quasi-ordered by ≤. The downward closure of D⊆X is defined as

A subset D⊆X is downwards-closed if D=\downcD. An ideal is a downwards-closed subset I⊆X that is additionally directed: I is non-empty and for all x,y∈I, there exists z∈I such that x≤z and y≤z (equivalently, every finite subset of I has an upper bound in I). We denote the set of ideals of X by \idealsX, \idealsX\defeq{D⊆X:D=\downcD and D is directed}.

It is known that

Therefore, every ideal of \Nd is naturally represented by some vector of \Nomegad, and vice versa. We write ω-rep(I) for this representation, for every I∈\ideals\Nd. For example, the ideal I=\N×\downc8×\downc3×\N is represented by ω-rep(I)=(ω,8,3,ω).

The completion of a WSTS enjoys numerous properties. In particular, it has strong monotonicity, and it is finitely branching [BFM18], \csuccI[a] is finite for every I∈\idealsX and a∈Σ. Note that if \lx@sectionsign has strong-strict monotonicity, then this property is not necessarily preserved by \comp\lx@sectionsign [BFM18]. Moreover, the completion of a WSTS may not be a WSTS since \idealsX is not always well-quasi-ordered by ⊆. However, for the vast majority of models used in formal verification, \idealsX is well-quasi-ordered, and hence completions remain well-structured. Indeed, \idealsX is well-quasi-ordered if and only if X is a so-called ω2-wqo, and widespread wqos, except possibly graphs under minor embedding, are ω2-wqo, as discussed in [FG12]. The traces of a WSTS are closely related to those of its completion:

Whenever the completion of a WSTS \lx@sectionsign is deterministic, we will often write w(I) for \csuccI[w] if the latter is nonempty and if there is no ambiguity with \ssuccI,w.

The Karp-Miller algorithm terminates for the following reasons: \Ndω is well-quasi-ordered and ω’s can only be added to vectors along a branch at most d times. Loosely speaking, the latter property means that \ideals\Nd has d+1 “levels”. Here, we generalize this notion. We say that an infinite sequence of ideals I0,I1,…∈\idealsX is an acceleration candidate if I0⊂I1⊂⋯. An acceleration candidate is below J∈\idealsX if Ii⊆J for every i∈\N, and it goes through a set A⊆\idealsX if Ii∈A for some i∈\N.

The nth level of \idealsX is defined as

When X is clear from the context, we will simply write An instead of An(\idealsX). For the specific case of X=\Nd, it can be shown that:

Therefore, we have ∅⊂A1⊂⋯⊂Ad+1=Ad+2=⋯ which corresponds to the fact that \ideals\Nd has d+1 different levels. In particular, if we identify Ad+1 with \Ndω, the set of its ω-representations, then Ad+k is equivalent to \Ndω for every k≥1. More formally:

An(\Ndω) is the set of d-tuples with less than n components equal to ω.

Using the fact that An(\Ndω) grows as n grows, it suffices to show the claim for n≤d+1. This is shown by induction on n. The case n=0 is obvious.

Conversely, assume that →x has less than n components equal to ω, say at positions 1,2,…,k<n (the general case is obtained by applying a permutation of the indices). There are only finitely many tuples →y≤→x that have their first k components equal to ω. Therefore any acceleration candidate below →x, being infinite, must contain a tuple with at most k−1 components equal to ω. Since k−1<n−1, by induction hypothesis it must go through An−1(\Ndω), showing that →x∈An(\Ndω). ∎

In general, we observe that ideal levels are monotonic and downwards-closed with respect to ideal inclusion: The following holds for every n∈\N:

Let n∈\N. If An=∅, then both claims follow immediately. Therefore, let us assume that An≠∅.

We have seen that \ideals\Nd has only d+1 levels, i.e. Ad+1(\ideals\Nd)=\ideals\Nd. We generalize this notion as follows:

In the forthcoming sections, we will be interested in sets of ideals that have finitely many levels. It is however worth mentioning that there are natural sets X whose ideals do not have finitely many levels of ideals, even if \idealsX is assumed to be countable and well-quasi-ordered. We postpone this discussion to Section 5 where we will study ideal levels in more details and in a more abstract setting.

The last key aspect of the Karp-Miller algorithm is the possibility to accelerate nodes. In order to generalize this notion, let us briefly develop some intuition. Recall that a newly added node c:→x is accelerated if it has an ancestor c′:→x′ such that →x>→x′. Consider the non-empty sequence w labeling the path from c′ to c. Since d-VAS have strong-strict monotonicity, both over \Nd and \Nomegad, wn(→x) is defined for every n∈\N. For example, if (5,0,1)\transw(5,1,3) is encountered, (5,1,3) is replaced by (5,ω,ω). This represents the fact that for every n∈\N, there exists some reachable marking →y≥(5,n,n). Note that an acceleration increases the number of occurrences of ω. In our example, the ideal I=\downc5×\downc1×\downc3, which is of level 0, is replaced by I′=\downc5×\N×\N, which is of level 2. Based on these observations, we extend the notion of acceleration to completions:

If w∞(I)=I, then the claim trivially holds. Thus, we may assume that I,w(I),\linebreakw2(I),… is an acceleration candidate. Since w∞(I) is a union of downwards-closed sets, it is readily seen to be downwards-closed. Let us show that it is also directed. Let x,y∈w∞(I). There exist k,ℓ∈\N such that x∈wk(I) and y∈wℓ(I). Therefore, both x and y are elements of wk+ℓ(I). Since wk+ℓ(I) is an ideal, there exists z∈wk+ℓ(I)⊆w∞(I) such that x≤z and y≤z. ∎

We have now introduced all the concepts necessary to present our generalization of the Karp-Miller algorithm. This algorithm applies to a new class222Note that the definition of very-WSTS given here is slightly more general than the one that appeared in the preliminary version of this paper [BFGL17]. More precisely, strong-strict monotonicity is replaced here with leveled-strong-strict monotonicity, which allows to encompass models such as ω-Petri nets. of WSTS that enjoy all of the generalized properties of vector addition systems:

where the ordering ≤P is defined by

Let N be a post-self-modifying net. Let us prove that each partial function f occurring on a transition t of N is leveled-increasing. Recall that f(→x)=→A⋅→x+→b where →A

is greater or equal to the identity matrix componentwise, and