Feature-based time series representation has attracted substantial attention in a wide range of time series analysis methods. Recently, the use of time series features for forecast model selection and model averaging has been an emerging research focus in the forecasting community. Nonetheless, most of the existing approaches depend on the manual choice of an appropriate set of features. Exploiting machine learning methods to automatically extract features from time series becomes crucially important in the state-of-the-art time series analysis. In this paper, we introduce an automated approach to extract time series features based on images. Time series are first transformed into recurrence images, from which local features can be extracted using computer vision algorithms. The extracted features are used for forecast model selection and model averaging. Our experiments show that forecasting based on automatically extracted features, with less human intervention and a more comprehensive view of the raw time series data, yields comparable performances with the top best methods proposed in the largest forecasting competition M4. 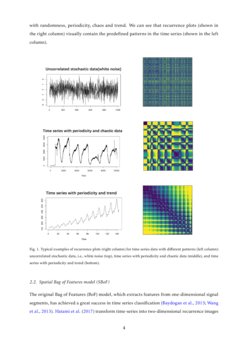 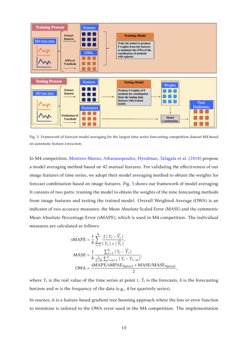 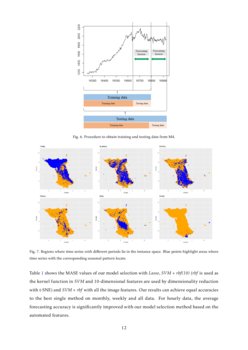 Many attempts have been made on feature-based model selection procedure for univariate time series forecasting. For example, Collopy & Armstrong (1992) provide 99 rules using 18 features to combine four extrapolation methods by examining a rule base to forecast annual economic and demographic time series; Arinze (1994)

describes the use of an artificial intelligence technique to improve forecasting accuracy and build an induction tree to model time series features and the most accurate forecasting method;

present a general framework for forecast model selection using meta-learning. They use random forest to select the best forecasting method based on time series features.

Having revisited the literature on feature-based time series forecasting, we find that although researchers, for many times, highlight the usefulness of time series features in selecting the best forecasting method, most of the existing approaches depend on the manual choice of an appropriate set of features. That makes the forecast model selection process, replying on the data and the questions to be asked (Fulcher, 2018), not flexible, although Fulcher (2018) presents a comprehensive range of features that can be used to represent a time series, such as global features, subsequence features and other hybrid ones. Therefore, exploiting automated feature extraction from time series becomes vital. Inspired by the recent work of Hatami et al. (2017) and Wang & Oates (2015), this paper aims to explore time series forecasting based on model selection as well as model averaging with the idea of time series imaging, from which time series features can be automatically extracted using computer vision algorithms. The key contributions of our paper are as follows.

where R(i,j) is the element of the recurrence matrix R; i indexes time on the x-axis of the recurrence plot, j indexes time on the y-axis. ϵ is a predefined threshold, and Θ(⋅) is the Heaviside function. In short, one draws a black dot when xi and xj are closer than ϵ. Instead of binary output, an unthresholded RP is not binary, but is difficult to quantify. We use the following modified RP, which balances binary output and the unthresholded RP.

that identify the maxima/minima of the difference of Gaussians (DoG) that occur at multiple scales space of an image as its key descriptors. Then each descriptor can be projected into its local-coordinate system, and the projected coordinates are integrated by max pooling to generate the final representation with the locality constrained linear coding (LLC) method

To summarize, the top panel of Fig. 2 shows the framework of our method for image-based time series feature extraction, which consists of four steps: (i) encode time series as image with recurrence plots; (ii) detect key points with SIFT and find basic descriptors with k-means; (iii) generate the final representation based on LLC; and (iv) extract spatial information via SPM. We interpret the details in each step, respectively, in the following sections.

Scale-invariant feature transform (SIFT) is a computer vision algorithm, which is used to detect and describe local features in images. It finds key points in the spatial scale and extracts its position, scale, and rotation invariants. Key points are then taken as maxima/minima of the difference of Gaussians that occur at multiple scales. In our study, we use a 128-dimensional vector to characterize the key descriptors in an image. Firstly, we establish an 8-direction histogram in each

4×4 sub-region, and a total of 16 sub-regions in the 16×16 region around the key points are calculated. Then we calculate the magnitude and direction of each pixel’s gradient magnitude and add to the sub-region. In the end, a total of 128-dimensional image data based on histograms are generated.
Locality constrained Linear Coding (LLC)

Locality constrained Linear Coding (LLC) (Wang et al., 2010) utilizes the locality constraints to project each descriptor into its local-coordinate system, and the projected coordinates are integrated by max pooling to generate the final representation as

where di=exp(dist(xi,B)/σ), and xi∈R128×1 is the vector of one descriptors. The basic descriptors B∈R128×M is obtained by k-means. The representation parameters xi, which are used as time series representation. The locality adaptor di gives different freedom for each basis vector proportional to its similarity to the input descriptor. We use σ for adjusting the weight decay speed for the locality adaptor and λ is the adjustment factor. The LLC incremental codebook optimization is described in Algorithm 1.

The BoF model calculates the distribution characteristics of feature points in the whole image, and then generates a global histogram, so the spatial distribution information of the image is lost, and the image may not be accurately identified.

A spatial pyramid method statistically distributes image feature points at different resolutions to obtain spatial information of images. The image is divided into progressively finer grid sequences at each level of the pyramid, and features are derived from each grid and combined into one large feature vector. Fig. 3 depicts the diagram of SPM and Max pooling process.

use the features acquired by the convolutional neural network as the input of the classifier, which significantly improves the accuracy of image classification. In this paper, we use deep networks to train raw data and rely on the network to extract richer and more expressive time series features. The benefit is obvious - it avoids complicated manual feature extraction and automatically extracts more expressive features.

The question to be answered by transfer learning

(Pan & Qiang, 2010) is:  Given a research area and task, how to use similar areas to transfer knowledge to achieve goals? Why do transfer learning? (1).Data labels are difficult to obtain (2).Building models from scratch is complex and time consuming.

is perhaps the easiest way to migrate deep networks. In short, it uses pre-trained networks and make adjustments to their own tasks. In practical applications, for a new task we usually don‘t need to train a neural network from scratch. (1) This kind of operation is obviously very time consuming. In particular, our training data cannot be as large as ImageNet can, and it can train deep neural networks with sufficient generalization ability. (2) Even with so much training data, the cost of training from scratch is unbearable because of large computation.

With the pre-trained model, we fix the parameters of the previous layers, and fine-tune the next few layers for our task. In general, the nearer to the front layer, the more general features can be extracted; the nearer to the back layer, the more specific features for classification tasks can be extracted. In this way, the speed of network training will be greatly accelerated, and it will also greatly promote the performance of our task.

In M4 competition, Montero-Manso, Athanasopoulos, Hyndman, Talagala et al. (2018) propose a model averaging method based on 42 manual features. For validating the effectiveness of our image features of time series, we adopt their model averaging method to obtain the weights for forecast combination based on image features. Fig. 5 shows our framework of model averaging. It consists of two parts: training the model to obtain the weights of the nine forecasting methods from image features and testing the trained model. Overall Weighted Average (OWA) is an indicator of two accuracy measures: the Mean Absolute Scaled Error (MASE) and the symmetric Mean Absolute Percentage Error (sMAPE), which is used in M4 competition. The individual measures are calculated as follows:

where Yt is the real value of the time series at point t, ^Yt is the forecasts, h is the forecasting horizon and m is the frequency of the data (e.g., 4 for quarterly series).

Chen & Guestrin (2016), a tool that is computationally efficient and allows a high degree of customization.

In order to get the weight w(fn)m for every method, softmax transform is carried on the output p(fn)m of the XGboost by Montero-Manso, Talagala, Hyndman & Athanasopoulos (2018) .

The gradient tree boosting approach implemented in XGBoost works so that the weighted average loss function is minimized:

4.2 Time series with different periods in the instance space

We project the time series with different periods into instance space using t-SNE (Maaten, 2014). Yearly, quarterly, monthly, daily and hourly data can be well distinguished in the instance spaces shown in Fig. 7.

4.3 Forecasting based on automated features

We compare our model selection results with the forecasting performances of the nine single methods. The model averaging results are compared with the top 10 methods in M4 competition.

Table 1 shows the MASE values of our model selection with Lasso, SVM + rbf(10) (rbf is used as the kernel function in SVM and 10-dimensional features are used by dimensionality reduction with t-SNE) and SVM + rbf with all the image features. Our results can achieve equal accuracies to the best single method on monthly, weekly and all data. For hourly data, the average forecasting accuracy is significantly improved with our model selection method based on the automated features.

Tables 2, 3 and 4 show the MASE, sMAPE and OWA values of our model averaging model with the top 10 most accurate methods in M4 competition, respectively. Overall, our model averaging with automated features can achieve comparable performances with the top methods in M4 competition. Specifically, it can be seen from Table 2, our method outperforms the best approach for daily and hourly data and performs equally well on yearly data.

Using image features for forecast model combination is proposed by our paper. The proposed method enables automated feature extraction, making it more flexible than using manually selected time series features. More importantly, it is able to produce comparable forecast accuracies with the top methods in largest time series forecasting competition (M4). To the best of our knowledge, this is the first paper that applies imaging to time series forecasting.

In this paper, we employ recurrence plots to encode time series in to images, and use spatial Bag-of-Features model to extract features from images. Also, depending on the size of the dataset and the limitation of computation resources, some classic convolution neural network (CNN) would be an alternative for feature extraction from images. To further improve the forecasting performances based on the automated features, the optimal weight training methods in model averaging needs to be further studied, making it suitable for high dimensional image features.

Yanfei Kang and Feng Li’s research were supported by the National Natural Science Foundation of China (No. 11701022 and No. 11501587, respectively).

The parameters for Recurrence Plot are set as follows:

The parameters for SIFT are set as follows:

The parameters for pre trained CNN models are set as follows:

In model averaging, we need to set parameters for XGBoost. We have performed a search in a subset of the hyper-parameter spaces, measuring OWA via a 10-fold cross validation of the training data.

The hyper-parameters are set as follows: