Keszegh (2009) proved that the extremal function ex(n, P) of any forbidden light 2-dimensional 0-1 matrix P is at most quasilinear in n, using a reduction to generalized Davenport-Schinzel sequences. We extend this result to multidimensional matrices by proving that any light d-dimensional 0-1 matrix P has extremal function ex(n, P,d) = O(n^d-12^α(n)^t) for some constant t that depends on P. To prove this result, we introduce a new family of patterns called (P, s)-formations, which are a generalization of (r, s)-formations, and we prove upper bounds on their extremal functions. In many cases, including permutation matrices P with at least two ones, we are able to show that our (P, s)-formation upper bounds are tight. 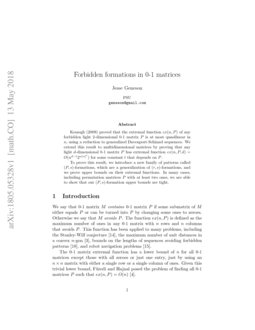 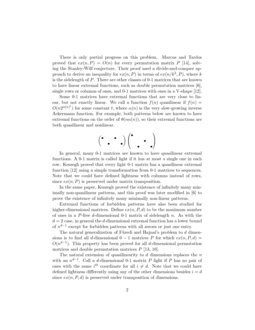 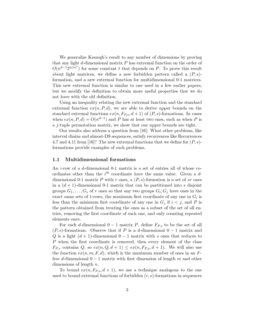 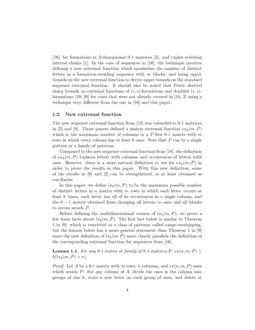 We say that 0-1 matrix M contains 0-1 matrix P if some submatrix of M either equals P or can be turned into P by changing some ones to zeroes. Otherwise we say that M avoids P. The function ex(n,P) is defined as the maximum number of ones in any 0-1 matrix with n rows and n columns that avoids P. This function has been applied to many problems, including the Stanley-Wilf conjecture [14], the maximum number of unit distances in a convex n-gon [3], bounds on the lengths of sequences avoiding forbidden patterns [18], and robot navigation problems [15].

The 0-1 matrix extremal function has a lower bound of n for all 0-1 matrices except those with all zeroes or just one entry, just by using an n×n matrix with either a single row or a single column of ones. Given this trivial lower bound, Füredi and Hajnal posed the problem of finding all 0-1 matrices P such that ex(n,P)=O(n) [4].

There is only partial progress on this problem. Marcus and Tardos proved that ex(n,P)=O(n) for every permutation matrix P [14], solving the Stanley-Wilf conjecture. Their proof used a divide-and-conquer approach to derive an inequality for ex(n,P) in terms of ex(n/k2,P), where k is the sidelength of P. There are other classes of 0-1 matrices that are known to have linear extremal functions, such as double permutation matrices [6], single rows or columns of ones, and 0-1 matrices with ones in a V-shape [12].

In general, many 0-1 matrices are known to have quasilinear extremal functions. A 0-1 matrix is called light if it has at most a single one in each row. Keszegh proved that every light 0-1 matrix has a quasilinear extremal function [12] using a simple transformation from 0-1 matrices to sequences. Note that we could have defined lightness with columns instead of rows, since ex(n,P) is preserved under matrix transposition.

The natural extension of quasilinearity to d dimensions replaces the n with an nd−1. Call a d-dimensional 0-1 matrix P light if P has no pair of ones with the same ith coordinate for all i≠d. Note that we could have defined lightness differently using any of the other dimensions besides i=d since ex(n,P,d) is preserved under transposition of dimensions.

We generalize Keszegh’s result to any number of dimensions by proving that any light d-dimensional matrix P has extremal function on the order of O(nd−12α(n)t) for some constant t that depends on P. To prove this result about light matrices, we define a new forbidden pattern called a (P,s)-formation, and a new extremal function for multidimensional 0-1 matrices. This new extremal function is similar to one used in a few earlier papers, but we modify the definition to obtain more useful properties that we do not have with the old definition.

Our results also address a question from [16]: What other problems, like interval chains and almost-DS sequences, satisfy recurrences like Recurrences 4.7 and 4.11 from [16]? The new extremal functions that we define for (P,s)-formations provide examples of such problems.

The new sequence extremal function from [16] was extended to 0-1 matrices in [2] and [9]. Those papers defined a matrix extremal function exk(m,P) which is the maximum number of columns in a P-free 0-1 matrix with m rows in which every column has at least k ones. Note that P can be a single pattern or a family of patterns.

Compared to the new sequence extremal function from [16], the definition of exk(m,P) replaces letters with columns and occurrences of letters with ones. However, there is a more natural definition to use for exk(m,P) in order to prove the results in this paper. With this new definition, some of the results in [9] and [2] can be strengthened, or at least obtained as corollaries.

In this paper, we define lxk(m,P) to be the maximum possible number of distinct letters in a matrix with m rows in which each letter occurs at least k times, each letter has all of its occurrences in a single column, and the 0−1 matrix obtained from changing all letters to ones and all blanks to zeroes avoids P.

Before defining the multidimensional version of lxk(m,P), we prove a few basic facts about lxk(m,P). The first fact below is similar to Theorem 1 in [9], which is restricted to a class of patterns called range-overlapping, but the lemma below has a more general statement than Theorem 1 in [9] since the new definition of lxk(m,P) more closely parallels the definition of the corresponding extremal function for sequences from [16].

Let A be a 0-1 matrix with m rows, n columns, and ex(n,m,P) ones which avoids P. For any column of A, divide the ones in the column into groups of size k, write a new letter on each group of ones, and delete at most k−1 ones in each column that are left over if the number of ones in the column is not divisible by k.

The new matrix has each letter occurring k times with its occurrences in the same column, and the 0−1 matrix obtained from changing all letters to ones and all blanks to zeroes is contained in A, so it avoids P. Since we deleted at most (k−1)n ones, we have ex(n,m,P)≤k(lxk(m,P)+n). ∎

The next lemma strengthens Lemma 2 from [9], since lxk(m,P) is never less than exk(m,P).

Let A be any P-avoiding matrix with m rows and lxk(m,P) letters, in which each letter occurs k times and makes all of its occurrences in the same column. Note that the number of nonempty columns in A is at most lxk(m,P), so A has at most ex(lxk(m,P),m,P)≤g(m)+lxk(m,P)c ones by assumption.

Observe that the last lemma can be applied to any pattern P with a known linear extremal function ex(n,P) that has ones in multiple columns, such as any permutation matrix or double permutation matrix, to obtain θ(m/k) bounds on lxk(m,P).

Cibulka and Kyncl defined a doubled (r,s)-formation as a set S of r(2s−2) ones for which there exists an s-partition of the rows and an r-tuple of columns each of which has a single one from S in the top and bottom rows of the partition and two ones in all other intervals [2]. Define Dr,s as the set of all doubled (r,s)-formations. Cibulka and Kyncl proved for m≥k≥Ds(j) that exk(m,Dr,s)≤csrmαj(m)s−2 where cs is a constant that depends only on s.

We note below the observation that the proof used in [2] gives the same upper bound for lxk, with columns replaced by letters in the proof.

Note that Cibulka and Kyncl’s result that exk(m,Dr,s)≤csrmαj(m)s−2 follows as a corollary from the last remark.

This proof is nearly identical to the proof of Lemma 1.1, with 1-rows replacing columns. ∎

The next proof below is very similar to one of the bounds in [5], besides the factor of ex(n,P,d). The ex(n,P,d) can be seen as generalizing the factor of r−1 in that proof, since ex(n,Q,1)=r−1 when Q is the 1-dimensional 0−1 matrix of length r with r ones.

Let A be a (d+1)-dimensional 0-1 matrix with first dimension of length m, other dimensions of length n, and lxs(n,m,FP,s,d+1) distinct letters such that A avoids (P,s)-formations and every letter of A has at least s occurrences, all in the same 1-row. An occurrence of a letter in a 1-row of A

is called even if there are an odd number of occurrences of the letter to the left of it. Otherwise the letter is called odd.

For each s the equation has (m−⌈s2⌉⌊s2⌋) positive integer solutions, so there are at least ex(n,P,d)+1 distinct letters q1,…,qex(n,P,d)+1 with even occurrences having the same ⌊s2⌋ 1-coordinates of A. Then A contains a (P,s)-formation, a contradiction. ∎

The next several recurrences are proved in nearly the same way as the corresponding recurrences in [16].

Like the last proof and corollary, the proofs of the next recurrence and corollary parallel Recurrence 4.11 and Corollary 4.12 in [16].

Combining this last corollary with Lemma 2.1, we obtain the following general bounds for any P and s.

Plugging in k=α(n) to the last theorem gives the main result.

Using the last corollary, we prove inductively that any light d-dimensional 0-1 matrix P has extremal function at most O(nd−12α(n)t) for some constant t that depends on P.

For d=2, the result was proved in [12]. Suppose that d>2 and the result is true for all light r-dimensional 0-1 matrices with r<d. Let P′ be the light (d−1)-dimensional matrix obtained from P by treating the ones as a subset of the set of all entries, removing the first coordinate of each one, and only counting repeated elements once. If s is the number of ones in P, then P is contained in all (P′,s)-formations.

We finish with an observation that our upper bounds on (P,s)-formations are tight in many cases. In particular, consider any d-dimensional 0-1 matrix P with at least two ones such that ex(n,P,d)=O(nd−1).

Every (P,s)-formation has a 2-dimensional projection that contains As. Thus we have the tight results below by Corollary 2.11.

One remaining problem is to find sharp bounds on ex(n,FP,s,d+1) for all P and s, since the last theorem only covers d-dimensional patterns P with at least two ones such that ex(n,P,d)=O(nd−1). Another problem is to find better bounds on the extremal function lxk(m,P) and its higher-dimensional generalizations. Also, bounds on formations were used in [8, 11, 7] to algorithmically find tight upper bounds on extremal functions of forbidden sequences and forbidden families of 0-1 matrices. Can this algorithmic method be extended to (P,s)-formations to obtain tight upper bounds on forbidden families of d-dimensional 0-1 matrices for d>2?