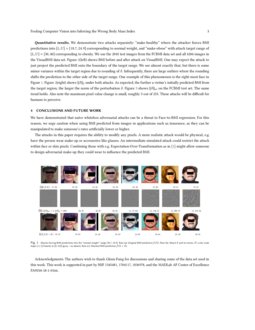 In this paper we instead focus on the application of Face-to-BMI in the insurance industry, where adversarial attacks could become a issue. Suppose an insurance company uses a neural network to predict the BMI of their clients from photos and then uses this information to influence coverage. There are two scenarios in which an adversarial attacker may want to manipulate the input photo inperceptibly to attack the BMI predictor: (1) the attacker may want to make someone appear healthier to lower their rates; (2) conversely, make someone appear unhealthy to sabotage that person’s insurance application. We demonstrate that a neural network performing Face-to-BMI is indeed vulnerable to test-time adversarial attacks. This extends test-time adversarial attacks from classification tasks (e.g. (Papernot et al., 2016; Moosavi-Dezfooli et al., 2016; Goodfellow et al., 2015; Carlini and Wagner, 2017)) to regression.

face image and outputs a BMI estimate. We use Alexnet

(Krizhevsky et al., 2012) layers conv1 to fc7 plus one linear layer after fc7 to perform regression.

The threat model assumes a whitebox attacker with full knowledge of the victim weights and architecture. The attacker can edit any pixels in the photo, including those not on the human. We consider targeted attacks to force f prediction into a pre-specified target range [L,U]⊂R.

However, this is a difficult integer program. We heuristically solve a related problem to simply find a

small enough δ. We reformulate the attack goal as follows: L≤f(X+δ)≤U⇔(f(X+δ)−U+L2)2≤(U−L2)2. We relax the integral constraint on δ and change the objective:

We initialize δ=0 and perform early-stopping as soon as f(X+Round(δ))∈[L,U] to encourage small norm on δ.

. We train the BMI prediction network with transfer-learning. We load weights pre-trained on the ILSVRC 2012 data set for the conv1 to fc7 layers of Alexnet. Then we randomly initialize the last linear layer using Xavier

(Glorot and Bengio, 2010). Finally we fine tune the entire network’s weights using our own training images. We use a random subset of 7000 images in FCBMI for fine-tuning, and keep the remaining 2045 images in FCBMI and the whole VisualBMI for testing. We pre-process the images identically to in AlexNet (Krizhevsky et al., 2012): images are converted from RGB to BGR, re-sized to 227×227×3. Finally we subtract the grand mean pixel value from each pixel in the images in the training set. This means that we provide an input in [−255,255]227×227×3 to the neural network at test time. During training we use ℓ2 loss. We use the Adam (Kingma and Ba, 2014) optimizer with β1=0.9,β2=0.999. The batch size is 64 and learning rate is 0.0001.

Attack implementation. To solve (2) the attacker simulates the victim by pre-pending an extra input layer with X and 1s:

The attacker freezes the weights of the entire network except δ and trains the network using projected gradient descent on the objective in (2). Once training is complete, the attacker takes a final projection step and rounds δ so that (X+δ)∈I.

Qualitative results. Figure 1 shows the BMI attack on 8 photos from the VisualBMI data set. We obscured the eyes with black boxes to preserve partial anonymity of those pictured. The boxes are not present in the original data set, so neither the prediction network nor the attacker saw or were influenced by them. Here the attack goal is to force BMI predictions into the normal range [L,U]=[18.7,24.9]. The attacker succeeds at this. We note that all changes have small infinite norm: ∥δ∥∞≤2. Also, δs have more nonzero elements and vary more the further the original BMI is from the target range.

Quantitative results. We demonstrate two attacks separately: “make-healthy” where the attacker forces BMI predictions into [L,U]=[18.7,24.9] corresponding to normal weight, and “make-obese” with attack target range of [L,U]=[30,40] corresponding to obesity. We use the 2045 test images from the FCBMI data set and all 4206 images in the VisualBMI data set. Figure 2

(left) shows BMI before and after attack on VisualBMI. One may expect the attack to just project the predicted BMI onto the boundary of the target range. We see almost exactly that, but there is some minor variance within the target region due to rounding of

. Infrequently, there are large outliers where the rounding shifts the prediction to the other side of the target range. One example of this phenomenon is the right-most face in Figure

1. Figure 2(right) shows ∥δ∥2 under both attacks. As expected, the further a victim’s initially predicted BMI from the target region, the larger the norm of the perturbation δ. Figure 3 shows ∥δ∥∞ on the FCBMI test set. The same trend holds. Also note the maximum pixel value change is small, roughly 5 out of 255. These attacks will be difficult for humans to perceive.

We have demonstrated that naïve whitebox adversarial attacks can be a threat to Face-to-BMI regression. For this reason, we urge caution when using BMI predicted from images in applications such as insurance, as they can be manipulated to make someone’s rates artificially lower or higher.

The attacks in this paper requires the ability to modify any pixels. A more realistic attack would be physical, e.g. have the person wear make-up or accessories like glasses. An intermediate simulated attack could restrict the attack within face or skin pixels. Combining these with e.g. Expectation-Over-Transformation as in (Athalye and Sutskever, 2017) might allow someone to design adversarial make-up they could wear to influence the predicted BMI.