Food image recognition is one of the promising applications of visual object recognition in computer vision. In this study, a small-scale dataset consisting of 5822 images of ten categories and a five-layer CNN was constructed to recognize these images. The bag-of-features (BoF) model coupled with support vector machine was first tested as comparison, resulting in an overall accuracy of 56 Data expansion techniques were applied to increase the size of training images, which achieved a significantly improved accuracy of more than 90 the overfitting issue that occurred to the CNN without using data expansion. Further improvement is within reach by collecting more images and optimizing the network architecture and relevant hyper-parameters. 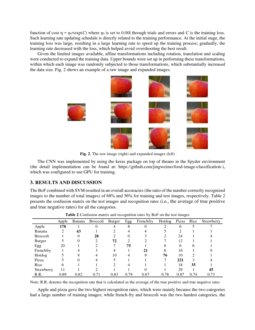 ten-class food images and classification based on cnn in python

Due to the widespread use of low-cost imaging devices like smart-phone cameras, more and more applications are being developed in computer vision communities to facilitate automatic object recognition, among which recognition of food images has recently gained much attention ref1 ; ref2 ; ref3 ; ref4

, to extract and combine local features from a two-dimensional input. Compared to conventional hand-crafted feature extraction based approaches, CNN is advantageous since it is able to learn optimal features from images adaptively. In implementing CNN for image classification, researchers have to collect such a large-scale dataset as the ILSVERC that contains more than one million images

ref5 ; ref7 , for network training because of the need for learning a large number of parameters involved in the network, which, however, is not a trivial task. One simple way to deal with the situation is to apply the CNN model that has been pre-trained based on a large-scale image data ref1 ; ref8

This study was aimed to apply CNNs aided with data expansion techniques to a ten-class small-scale food image data. As comparison, a conventional a bag-of-feature (BoF) model combined with linear support vector machine (SVM) based approach was also employed for food image recognition. Experimental results demonstrated the superior performance of CNN and the effectiveness of data expansion techniques in training small-scale data.

A total of 5822 color images, representing ten-class food items, were collected from the ImageNet (http://image-net.org/). The number of images for each category is summarized in TABLE 1.

These images had a large variations in quality and size. Some of them have a neat, uniform background while some have cluttered background. Prior to image analysis, all the images were down-sampled to a fixed resolution of 128×128, and then randomly divided into two parts for training and test with a 4:1 ratio, resulting in 4654 training and 1168 test images.

The BoF model has been extensively used for image classification. In this method, an image is treated as a collection of orderless descriptors extracted from local patches, which are quantized into discrete visual words and represented by a compact histogram ref11 . Scale invariant feature transform (SIFT) descriptors that are not affected by perspective, scale, occlusion or illumination ref12 , are one of the most robust and popular feature descriptors. In this study, the BoF model with SIFT descriptors was used to extract features that were then fed to linear SVM for image classification, and this approach was implemented by means of the VLFeat library ref13 .

The architecture of the CNN used in this study is schematically illustrated in FIG. 1. The network has four layers of hidden neurons (three convolutional-pooling and one fully-connected), apart from a final layer of output neurons (the input is not considered as a layer). The input contains

with a stride length of 1 pixel to extract 32 feature maps, followed by a max pooling operation conducted in a

2×2 region; the second and third convolutional-pooling layers use 5×5 and 3×3

local receptive fields, resulting in 64 and 128 feature maps, respectively, and the other parameters remain unchanged. The fourth layer is a fully-connected layer with 128 rectified linear units (ReLU) neurons, and the output layer has 10 softmax neurons that correspond to the ten categories of food. The three convolutional-pooling layers also use ReLU activation functions.

The network was trained with the stochastic gradient descent (SGD) algorithm with a cross-entropy cost function. The dropout that randomly eliminate a portion of neurons from the network was used to reduce possible overfitting. The dropout rates of 0.25 and 0.5 were set for the third convolutional-pooling layer and the fully-connected layer, respectively. Training a CNN model requires to select a set of hyper-parameters, among which the leaning rate

The BoF combined with SVM resulted in an overall accuracies (the ratio of the number correctly recognized images to the number of total images) of 68% and 56% for training and test images, respectively. TABLE 2 presents the confusion matrix on the test images and recognition rates (i.e., the average of true positive and true negative rates) for all the categories.

Apple and pizza gave the two highest recognition rates, which were mainly because the two categories had a large number of training images; while french-fry and broccoli was the two hardest categories, the majority of which were misclassified into another distinct class. The BoF based approach did not performed well as expected, which was possibly because that the extraction of SIFT descriptors was conducted only to grayscale images, and also the parameter optimization was not fully done in descriptor quantization. The CNN was first implemented without using data expansion techniques. FIG. 3 show the accuracy and loss curves during training with the maximum training epoch set to 100. A large gaps between training and test occurred after 10 epochs, indicating the presence of overfitting. The highest accuracy on the test images was found to be 74%, corresponding to a training accuracy 95%. These results were much better than those obtained by the BoF approach, which confirmed the superiority of CNN.

Then, the CNN was trained with the expanded image data. As illustrated in FIG. 4, two significant improvements were achieve through almost trivial data transformations. First, the test accuracy was greatly elevated to a level up to 87% within 100 epochs, and second, the overfitting issue observed above was completely eliminated. The data expansion substantially increases the effective size of the training data, thus helping improve the training performance and making the model generalize well.

TABLE 3 presents the confusion matrix by the best CNN model for the test images and the corresponding recognition rates for each food category. Compared with Table 2, the CNN model resulted in the overall accuracy improved from 56% to 90%, and the average recognition rate from 0.78% to 94%.

This study reported on the applications of CNNs to a ten-class small-scale food image data. A five-layer CNN model was constructed achieved the best test accuracy of 74%, which was better than the accuracy of 56% achieved by the BoF approach. The CNN model however suffered from noticeable overfitting due to limited training data. This issue was addressed by expanding the training data through various affine transformations, which also considerably increased the overall test accuracy to more than 90%. Training the CNNs with different epochs showed limited room for improving test accuracy. Further improvements can be anticipated by collecting more training data and or by optimizing the architecture and hyper-parameters of the network, rather than by based on increasing the training epochs in the current framework, which, otherwise, could be liable to overtraining.