In densely populated environments, socially compliant navigation is critical for autonomous robots as driving close to people is unavoidable. This manner of social navigation is challenging given the constraints of human comfort and social rules. Traditional methods based on hand-craft cost functions to achieve this task have difficulties to operate in the complex real world. Other learning-based approaches fail to address the naturalness aspect from the perspective of collective formation behaviors. We present an autonomous navigation system capable of operating in dense crowds and utilizing information of social groups. The underlying system incorporates a deep neural network to track social groups and join the flow of a social group in facilitating the navigation. A collision avoidance layer in the system further ensures navigation safety. In experiments, our method generates socially compliant behaviors as state-of-the-art methods. More importantly, the system is capable of navigating safely in a densely populated area (10+ people in a 10m x 20m area) following crowd flows to reach the goal. 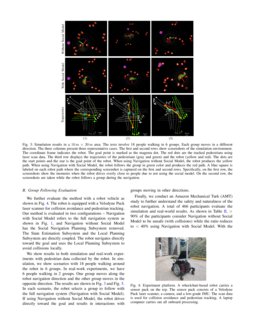 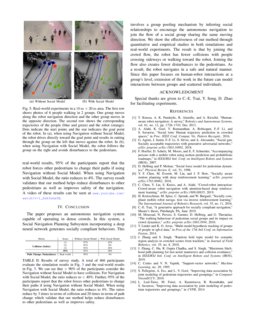 Social navigation is the capability of an autonomous agent, such as a ro...
Haresh Karnan, et al. ∙

On the Verification and Validation of AI Navigation Algorithms

This paper explores the state of the art on to methods to verify and val...
Ivan Porres, et al. ∙

The ability to safely navigate in populated scenes, e.g. airports, shopping malls, and social events, is essential for autonomous robots. The difficulty comes from the fact that people walk closely to the robot cutting ways in front of the robot or between the robot and the goal point. The safety margin for the robot to drive in crowded scenes is pushed to the minimum. In such a case, the navigation system has to trade-off between driving safely close to people and reaching the goal quickly. Furthermore, a previous study of socially compliant navigation [9] states three aspects in terms of the robot behaviors – comfort as the absence of annoyance and stress for humans in interaction with robots, naturalness as the similarity between the robot and human behaviors, and sociability as to abide by general cultural conventions. Among these three aspects, the first aspect essentially reflects safety of the navigation.

approaches. In particular, reinforcement learning-based methods use reward functions to penalizes improper robot behaviors eliminating the cause of discomfort

[14]. This paper extends the work in two ways. First, we consider the findings from a previous study [12] that 70% of people walk in social groups. Crowd behavior can be summarized as flows of social groups, and humans tend to move along the flow. It is our understanding that the behavior of joining the flow that shares similar heading direction is more socially compliant, causing fewer collisions and disturbances to surrounding pedestrians. Our method recognizes social groups and selects the flow to follow. Second, we ensure safety with a multi-layer navigation system. In this system, a deep learning-based global planning layer makes high-level socially compliant behavioral decisions while a geometry-based local planning layer handles collision avoidance at a low-level.

The paper is further related to previous work on modeling aggregate interactions among social groups [12] and leveraging learned social relations in tracking group formations [11]. Our main contributions are a deep learning-based method for socially compliant navigation with an emphasis on tracking and joining the crowd flow and an overall system integrated with the deep leaning method capable of safe autonomous navigation in dense crowds.

Fig. 1 gives an overview of the autonomous navigation system which consists of three subsystems as follows.

In the group-force generator, a group pooling module first associates the target agent to a group based on the motion information (see Fig. 2

). Then, the group pooling module computes path adjustments which essentially guide the robot to follow the group. We apply a support vector machine classifier

[5] trained by [11] to determine if two agents belong to the same group. This uses the local spatio-temporal relation to cluster the agents with similar motions based on the coherent motion indicators, i.e. the differences in walking speed, spatial locations, and headings.

We use the following equation to aggregate the hidden state from hjt to h′jt,

where Iij[si=sj] indicates if two agents are in the same group,

θi and θj are the agent headings. The resulting embedding Hti of hidden state h′jt is computed as a row vector which consists of the maximum elements from all other agents. The embedding is further concatenated for decoding,

We evaluate our method on two publicly available datasets: ETH [13] and UCY [10]. These datasets include rich social interactions in real-world scenarios. We follow the same evaluation methodology as the leave-one-out approach and the error metrics used in the prior work [1]:

We compare against a linear regressor that only predicts straight paths, Social-GAN(SGAN) [1], and Navi-GAN [14]. We use the past eight time steps to predict the future eight time steps. As shown in TABLE I, our method yields considerable accuracy improvements for some of the datasets where rich group interactions are prevalent. In particular, UNIV and ZARA1 have more than 70% of the pedestrians moving in social groups, and thus our model performs better. Our model performs slightly worse than the state-of-the-art approaches with the ETH and HOTEL datasets due to the lack of social group interactions. Further, our method assumes the existence of a goal point for each person in the dataset. Lacking precise goal point information results in a relative low accuracy. In the next experiments, we will show results with author-collected data where the strength of our method is more obvious.

We show results in both simulation and real-work experiments with pedestrian data collected by the robot. In simulation, we show scenarios with 18 people walking around the robot in 6 groups. In real-work experiments, we have 6 people walking in 2 groups. One group moves along the robot navigation direction and the other group moves in the opposite direction. The results are shown in Fig. 3 and Fig. 5. In each scenario, the robot selects a group to follow with the full navigation system (Navigation with Social Model). If using Navigation without Social Model, the robot drives directly toward the goal and results in interactions with groups moving in other directions.

The paper proposes an autonomous navigation system capable of operating in dense crowds. In this system, a Social Navigation Planning Subsystem incorporating a deep neural network generates socially compliant behaviors. This involves a group pooling mechanism by inferring social relationships to encourage the autonomous navigation to join the flow of a social group sharing the same moving direction. We show the effectiveness of our method through quantitative and empirical studies in both simulations and real-world experiments. The result is that by joining the crowd flow, the robot has fewer collisions with people crossing sideways or walking toward the robot. Joining the flow also creates fewer disturbances to the pedestrians. As a result, the robot navigates in a safe and natural manner. Since this paper focuses on human-robot interactions at a group’s level, extension of the work in the future can model interactions between groups and scattered individuals.

Special thanks are given to C.-E. Tsai, Y. Song, D. Zhao for facilitating experiments.