Recent advance in fluorescence microscopy enables acquisition of 3D image volumes with better quality and deeper penetration into tissue. Segmentation is a required step to characterize and analyze biological structures in the images. 3D segmentation using deep learning has achieved promising results in microscopy images. One issue is that deep learning techniques require a large set of groundtruth data which is impractical to annotate manually for microscopy volumes. This paper describes a 3D nuclei segmentation method using 3D convolutional neural networks. A set of synthetic volumes and the corresponding groundtruth volumes are generated automatically using a generative adversarial network. Segmentation results demonstrate that our proposed method is capable of segmenting nuclei successfully in 3D for various data sets. 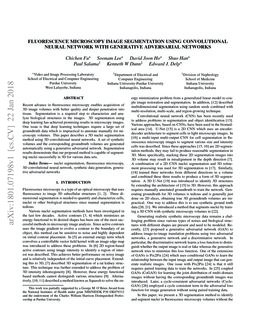 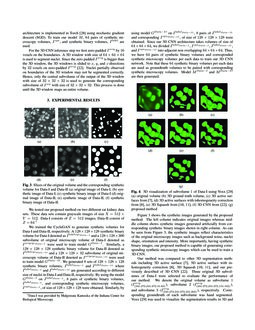 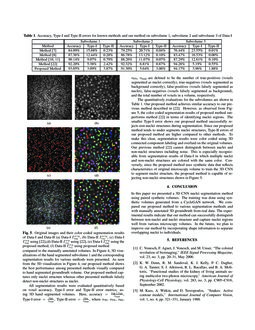 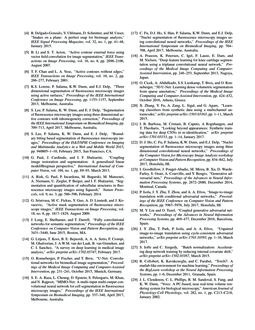 NeuRegenerate: A Framework for Visualizing Neurodegeneration

Fluorescence microscopy is a type of an optical microscopy that uses fluorescence to image 3D subcellular structures [1, 2]. Three dimensional segmentation is needed to quantify and characterize cells, nuclei or other biological structures.

Various nuclei segmentation methods have been investigated in the last few decades. Active contours [3, 4] which minimizes an energy functional to fit desired shapes has been one of the most successful methods in microscopy image analysis. Since active contours uses the image gradient to evolve a contour to the boundary of an object, this method can be sensitive to noise and highly dependent on initial contour placement. In [5]

an external energy term which convolves a controllable vector field kernel with an image edge map was introduced to address these problems. In

[6] 2D region-based active contours using image intensity to identify a region of interest was described. This achieves better performance on noisy image and is relatively independent of the initial curve placement. Extending this to 3D, [7] described 3D segmentation of a rat kidney structure. This technique was further extended to address the problem of 3D intensity inhomogeneity [8]. However, these energy functional based methods cannot distinguish various structures. Alternatively, [9, 10] described a method known as Squassh to solve the energy minimization problem from a generalized linear model to couple image restoration and segmentation. In addition, [11] described multidimensional segmentation using random seeds combined with multi-resolution, multi-scale, and region-growing technique.

Convolutional neural network (CNN) has been used to address problems in segmentation and object identification [12]. Various approaches, based on CNNs, have been used in the biomedical area [13]. U-Net [14] is a 2D CNN which uses an encoder-decoder architecture with skip connections to segment cells in light microscopy images. In [15] a multi-input multi-output CNN for cell segmentation in fluorescence microscopy images to segment various size and intensity cells was described. Since these approaches [14, 15] are 2D segmentation methods, they may fail to produce reasonable segmentation in 3D. More specifically, stacking these 2D segmentation images into 3D volume may result in misalignment in the depth direction [7]. Also, in [16] a method that trained three networks from different directions in a volume and combined these three results to produce a form of 3D segmentation was described. A 3D U-Net [17] was introduced to identify 3D structures by extending the architecture of [14] to 3D. However, this approach requires manually annotated groundtruth to train the network. Generating groundtruth for 3D volumes is tedious and is generally just done on 2D slices, obtaining true 3D groundtruth volumes are impractical. One way to address this is to use synthetic ground truth data [18, 19]. A method that segments nuclei by training a 3D CNN with synthetic microscopy volumes was described in [20]. Here, the synthetic microscopy volumes were generated by blurring and noise operations.

Generating realistic synthetic microscopy image volumes remains a challenging problem since various types of noise and biological structures with different shapes are present and need to be modeled. Recently, in [21]

[22] which uses conditional GANs to learn the relationship between the input image and output image that can generate realistic images. One issue with Pix2Pix [22] is that it still requires paired training data to train the networks. In [23]

[24] employed a cycle consistent term in the adversarial loss function for image generation without using paired training data. More recently, a segmentation method using concatenating segmentation network to CycleGAN to learn the style of CT segmentation and MRI segmentation was described in [25].

As shown in Figure 1, our proposed method consists of two steps: 3D synthetic data generation and 3D CNN segmentation. We first generate synthetic binary volumes, Ilabelcyc, and then use them with a subvolume of the original image volumes, Iorigcyc, to train a spatially constrained CycleGAN (SpCycleGAN) and obtain a generative model denoted as model G. This model G is used with another set of synthetic binary volume, Ilabel, to generate corresponding synthetic 3D volumes, Isyn. For 3D CNN segmentation, we can utilize these paired Isyn and Ilabel to train a 3D CNN and obtain model M. Finally, the 3D CNN model M is used to segment nuclei in Iorig to produce Iseg.

The CycleGAN is trained to generate a synthetic microscopy volume. CycleGAN uses a combination of discriminative networks and generative networks to solve a minimax problem by adding cycle consistency loss to the original GAN loss function as [21, 24]:

Although the CycleGAN uses cycle consistency loss to constrain the similarity of the distribution of Iorigcyc and Isyn, CycleGAN does not provide enough spatial constraints on the locations of the nuclei. CycleGAN generates realistic synthetic microscopy images but a spatial shifting on the location of the nuclei in Isyn and Ilabel was observed. To create a spatial constraint on the location of the nuclei, a network H is added to the CycleGAN and takes G(Ilabelcyc) as an input to generate a binary mask, H(G(Ilabelcyc)). Here, the architecture of H is the same as the architecture of G. Network H minimizes a L2 loss, LSpatial, between H(G(Ilabelcyc)) and Ilabelcyc. LSpatial serves as a spatial regulation term in the total loss function. The network H is trained together with G. The loss function of the SpCycleGAN is defined as:

where λ1 and λ2 are the weight coefficients for Lcyc and Lspatial, respectively. Note that first three terms are the same and already defined in Equation (2.1.1). Here, Lspatial can be expressed as

Figure 2 shows the architecture of our modified 3D U-Net. The filter size of each 3D convolution is 3×3×3

. To maintain the same size of volume during 3D convolution, a voxel padding of

is used in each convolution. A 3D batch normalization

and a leaky rectified-linear unit activation function are employed after each 3D convolution. In the downsampling path, a 3D max pooling uses

with stride of 2 is used. In the upsampling path, feature information is retrieved using 3D transpose convolutions. Our modified 3D U-Net is one layer deeper than conventional U-Net as can be seen in Figure

2. Our training loss function can be expressed as a linear combination of the Dice loss (LDice) and the binary cross-entropy loss (LBCE) such that

is a probability map of binary volumetric segmentation and

si∈S is a probability map at ith voxel location. Lastly, N is the number of entire voxels and μ1, μ2 serve as the weight coefficient between to loss terms in Equation (3). The network takes a grayscale input volume with size of 64×64×64

and produces an voxelwise classified 3D volume with the same size of the input volume. To train our model

Our SpCycleGAN is implemented in Pytorch using the Adam optimizer

Our modified 3D U-Net is implemented in Pytorch using the Adam optimizer [28] with learning rate 0.001. For the evaluation purpose, we use different settings of using 3D synthetic data generation methods (CycleGAN or SpCycleGAN), different number of pairs of synthetic training volume V (V=80 or V=1600) among 1600 pairs of synthetic binary volume corresponding synthetic microscopy volume. Also, we use different loss functions with different settings of the μ1 and μ2. Moreover, we also compared our modified 3D U-Net with 3D encoder-decoder architecture [20]. Lastly, small objects which are less than 100 voxels were removed using 3D connected components.

The quantitatively evaluations for the subvolumes are shown in Table 1. Our proposed method outperforms other compared methods. The smaller Type-I error shows our proposed method successfully rejects non-nuclei structures during segmentation. Also, our proposed method has reasonably low Type-II errors compared to other segmentation methods. Moreover, in this table, we show that our proposed SpCycleGAN creates better paired synthetic volumes which reflects in segmentation accuracy. Instead of 3D encoder-decoder structure, we use 3D U-Net which leads to better results since 3D U-Net has skip connections that can preserve spatial information. In addition, the combination of two loss functions such as the Dice loss and the BCE loss turns out to be better for the segmentation task in our application. In particular, the Dice loss constrains the shape of the nuclei segmentation whereas the BCE loss regulates voxelwise binary prediction. It is observed that training with more synthetic volumes can generalize our method to achieve better segmentation accuracy. Finally, the postprocessing (PP) that eliminates small components helps to improve segmentation performance.

To make this clear, segmentation results were color coded using 3D connected component labeling and overlaid on the original volumes. The method from [20] cannot distinguish between nuclei and non-nuclei structures including noise. This is especially recognizable from segmentation results of Data-I in which multiple nuclei and non-nuclei structures are colored with the same color. As can be observed from Figure 6 and 6, segmentation masks are smaller than nuclei size and suffered from location shifts. Conversely, our proposed method shown in Figure 6 and 6 segments nuclei with the right shape at the correct locations.

In this paper we presented a modified 3D U-Net nuclei segmentation method using paired synthetic volumes. The training was done using synthetic volumes generated from a spatially constrained CycleGAN. The combination of the Dice loss and the binary cross-entropy loss functions are optimized during training. We compared our proposed method to various segmentation methods and with manually annotated 3D groundtruth from real data. The experimental results indicate that our method can successfully distinguish between non-nuclei and nuclei structure and capture nuclei regions well from various microscopy volumes. One drawback of our proposed segmentation method is that our method cannot separate nuclei if they are physically touching to each other. In the future, we plan to develop nuclei localization method to identify overlapping nuclei to individuals.

This work was partially supported by a George M. O’Brien Award from the National Institutes of Health under grant NIH/NIDDK P30 DK079312 and the endowment of the Charles William Harrison Distinguished Professorship at Purdue University.

Data-I was provided by Malgorzata Kamocka of Indiana University and was collected at the Indiana Center for Biological Microscopy.