FlexRiLoG – A SageMath Package for Motions of Graphs

In this paper we present the SageMath package FlexRiLoG (short for flexible and rigid labelings of graphs). Based on recent results the software generates motions of graphs using special edge colorings. The package computes and illustrates the colorings and the motions. We present the structure and usage of the package. 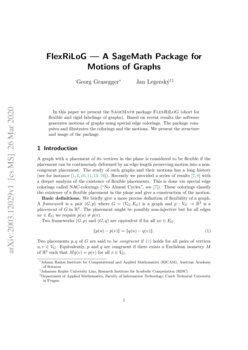 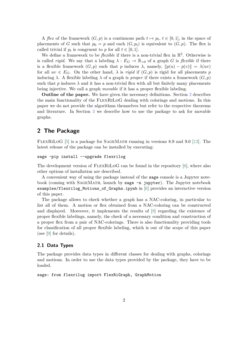 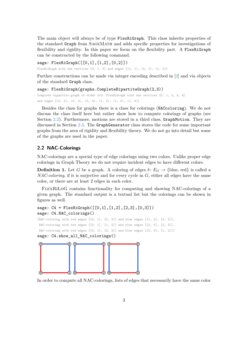 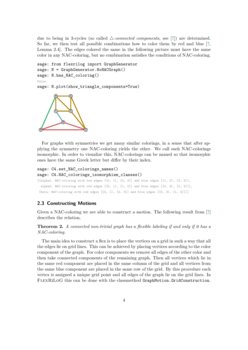 We present a short tutorial on to the use of the R gasper package. Gaspe...
Basile de Loynes, et al. ∙

In this paper, we present DiscreteZOO, a project which illustrates some ...
Katja Berčič, et al. ∙

Although models for count data with over-dispersion have been widely con...
Jordi Tur, et al. ∙

SageMath package for studying Flexible and Rigid Labelings of Graphs

A graph with a placement of its vertices in the plane is considered to be flexible if the placement can be continuously deformed by an edge length preserving motion into a non-congruent placement. The study of such graphs and their motions has a long history (see for instance [1, 4, 10, 11, 13, 14, 15, 16]). Recently we provided a series of results [7, 8] with a deeper analysis of the existence of flexible placements. This is done via special edge colorings called NAC-colorings (“No Almost Cycles”, see [7]

). These colorings classify the existence of a flexible placement in the plane and give a construction of the motion.

Basic definitions. We briefly give a more precise definition of flexibility of a graph. A framework is a pair (G,p) where G=(VG,EG) is a graph and p:VG→R2 is a placement of G in R2. The placement might be possibly non-injective but for all edges uv∈EG we require p(u)≠p(v).

Two placements p,q of G are said to be congruent if (1) holds for all pairs of vertices u,v∈VG. Equivalently, p and q are congruent if there exists a Euclidean isometry M of R2 such that Mq(v)=p(v) for all v∈VG.

We define a framework to be flexible if there is a non-trivial flex in R2. Otherwise is is called rigid. We say that a labeling λ:EG→R>0 of a graph G is flexible if there is a flexible framework (G,p) such that p induces λ, namely, ∥p(u)−p(v)∥=λ(uv) for all uv∈EG. On the other hand, λ is rigid if (G,p) is rigid for all placements p inducing λ. A flexible labeling λ of a graph is proper if there exists a framework (G,p) such that p induces λ and it has a non-trivial flex with all but finitely many placements being injective. We call a graph movable if it has a proper flexible labeling.

Outline of the paper. We have given the necessary definitions. Section 2 describes the main functionality of the FlexRiLoG dealing with colorings and motions. In this paper we do not provide the algorithms themselves but refer to the respective theorems and literature. In Section 3 we describe how to use the package to ask for movable graphs.

FlexRiLoG [5] is a package for SageMath running in versions 8.9 and 9.0 [12]. The latest release of the package can be installed by executing: sage -pip install –upgrade flexrilog The development version of FlexRiLoG can be found in the repository [6], where also other options of installation are described.

A convenient way of using the package instead of the sage console is a Jupyter notebook (coming with SageMath, launch by sage -n jupyter). The Jupyter notebook examples/flexrilog_Motions_of_Graphs.ipynb in [6] provides an interactive version of this paper.

The package allows to check whether a graph has a NAC-coloring, in particular to list all of them. A motion or flex obtained from a NAC-coloring can be constructed and displayed. Moreover, it implements the results of [8] regarding the existence of proper flexible labelings, namely, the check of a necessary condition and construction of a proper flex from a pair of NAC-colorings. There is also functionality providing tools for classification of all proper flexible labeling, which is out of the scope of this paper (see [9] for details).

The package provides data types in different classes for dealing with graphs, colorings and motions. In order to use the data types provided by the package, they have to be loaded. from flexrilog import FlexRiGraph, GraphMotion The main object will always be of type FlexRiGraph. This class inherits properties of the standard Graph from SageMath and adds specific properties for investigations of flexibility and rigidity. In this paper we focus on the flexibility part. A FlexRiGraph can be constructed by the following command. FlexRiGraph([[0,1],[1,2],[0,2]]) *FlexRiGraph with the vertices [0, 1, 2] and edges [(0, 1), (0, 2), (1, 2)] Further constructions can be made via integer encoding described in [2] and via objects of the standard Graph class. FlexRiGraph(graphs.CompleteBipartiteGraph(2,3)) *Complete bipartite graph of order 2+3: FlexRiGraph with the vertices [0, 1, 2, 3, 4] *and edges [(0, 2), (0, 3), (0, 4), (1, 2), (1, 3), (1, 4)]

Besides the class for graphs there is a class for colorings (NACcoloring). We do not discuss the class itself here but rather show how to compute colorings of graphs (see Section 2.2). Furthermore, motions are stored in a third class, GraphMotion. They are discussed in Section 2.3. The GraphGenerator class stores the code for some important graphs from the area of rigidity and flexibility theory. We do not go into detail but some of the graphs are used in the paper.

NAC-colorings are a special type of edge colorings using two colors. Unlike proper edge colorings in Graph Theory we do not require incident edges to have different colors.

Let G be a graph. A coloring of edges δ:EG→{\text{blue}{}, \text{red}{}} is called a NAC-coloring, if it is surjective and for every cycle in G, either all edges have the same color, or there are at least 2 edges in each color.

In order to compute all NAC-colorings, lists of edges that necessarily have the same color due to being in 3-cycles (so called △-connected components, see [7]) are determined. So far, we then test all possible combinations how to color them by red and blue [7, Lemma 2.4]. The edges colored the same in the following picture must have the same color in any NAC-coloring, but no combination satisfies the conditions of NAC-coloring. from flexrilog import GraphGenerator N = GraphGenerator.NoNACGraph() N.has_NAC_coloring() *False N.plot(show_triangle_components=True)

Given a NAC-coloring we are able to construct a motion. The following result from [7] describes the relation.

A connected non-trivial graph has a flexible labeling if and only if it has a NAC-coloring.

The main idea to construct a flex is to place the vertices on a grid in such a way that all the edges lie on grid lines. This can be achieved by placing vertices according to the color component of the graph. For color components we remove all edges of the other color and then take connected components of the remaining graph. Then all vertices which lie in the same red component are placed in the same column of the grid and all vertices from the same blue component are placed in the same row of the grid. By this procedure each vertex is assigned a unique grid point and all edges of the graph lie on the grid lines. In FlexRiLoG this can be done with the classmethod GraphMotion.GridConstruction. from flexrilog import GraphMotion, GraphGenerator P = GraphGenerator.ThreePrismGraph() delta = P.NAC_colorings()[0] motion_P = GraphMotion.GridConstruction(P, delta) motion_P.parametrization() *0: (0, 0), * 1: (sin(alpha) + 1, cos(alpha)), * 2: (2*sin(alpha) + 1, 2*cos(alpha)), * 3: (2*sin(alpha), 2*cos(alpha)), * 4: (sin(alpha), cos(alpha)), * 5: (1, 0) There is also the option to generate an animated SVG showing the NAC-coloring, which is automatically displayed when used in a Jupyter notebook (the picture below is a screenshot). If the fileName is specified, the SVG animation is stored and a web browser can be used to view it. Note that not all web browsers support SVG animations. It can be chosen, whether the edges are colored according to the NAC-coloring in use. The package also distinguishes the vertex layout depending on whether it is drawing a graph having no specific placement properties (dark vertices), or drawing a motion, in which edge lengths are fixed (light vertices). motion_P.animation_SVG(edge_partition="NAC", . fileName="3-prism_grid")

More generally the base points of the grid can be chosen arbitrarily to get a zig-zag grid. This can be used to avoid degenerate subgraphs. Base points consist of two lists. The standard values consists of lists with points (i,0) and (0,i) respectively. Using them we get a rectangular initial grid. A zig-zag grid in general does not need to be initially rectangular. It is uniquely determined by the base points and drawing parallel lines. Doing so the grid consists of parallelograms. Usually the grid itself is not easily visible from the output motion. motion_P = GraphMotion.GridConstruction(P, delta, . zigzag=[[[0,0], [3/4,1/2], [2,0]], . [[0,0], [1,0]]]) motion_P.animation_SVG(edge_partition="NAC")

Using the grid construction, non-adjacent vertices might overlap, i.e., the constructed framework is not proper. Note, that this cannot be avoided by zig-zag constructions either but depends solely on the NAC-coloring in use. For some graphs all NAC-colorings result in overlapping vertices. In FlexRiLoG it can be checked whether this is the case. P.has_injective_grid_construction() *True Q1 = GraphGenerator.Q1Graph() # see the picture below Q1.has_injective_grid_construction() *False For some graphs, a proper flexible labeling exists due to the following lemma [8], which relates movability to spatial embeddings.

Let G be a graph with an injective embedding ω:VG→R3 such that for every edge uv∈EG

The package tries to construct such a spatial embedding for all pairs of NAC-colorings. inj, nacs = Q1.has_injective_spatial_embedding( . certificate=True); inj *True graphics_array([d.plot() for d in nacs])

Besides the sufficient condition on movability above, there is also a necessary condition given in [8]. For this condition we consider all NAC-colorings and look for monochromatic paths. Adding certain edges according to these paths we get a bigger graph with similar movability properties.

For a graph G, let U(G) denote the set of all pairs {u,v}⊂VG such that uv∉EG and there exists a path from u to v which is monochromatic for all NAC-colorings δ of G. If there exists a sequence of graphs G0,…,Gn such that G=G0, Gi=(VGi−1,EGi−1∪U(Gi−1)) for i∈{1,…,n}, and U(Gn)=∅, then the graph Gn is called the constant distance closure of G, denoted by CDC(G).

We gave a brief overview of the package and therefore did not cover all functionality. The package contains a documentation. As research in the field of flexible and movable graphs is going on the package is further developed, both regarding improvements as well as new functionality (for instance n-fold rotationally symmetric frameworks, see [3]). The most current version of FlexRiLoG can be found in [6].