Motivated by uncertain parameters encountered in Markov decision processes (MDPs), we study the effect of parameter uncertainty on Bellman operator-based methods. Specifically, we consider a family of MDPs where the cost parameters are from a given compact set. We then define a Bellman operator acting on an input set of value functions to produce a new set of value functions as the output under all possible variations in the cost parameters. Finally we prove the existence of a fixed point of this set-based Bellman operator by showing that it is a contractive operator on a complete metric space. 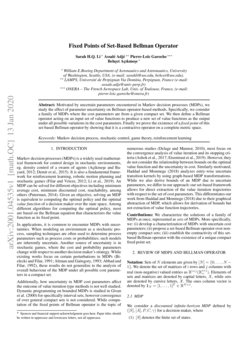 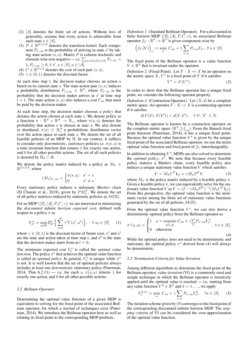 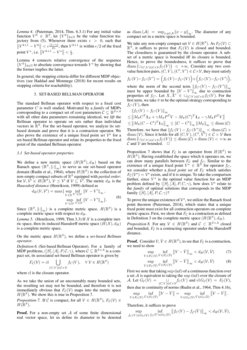 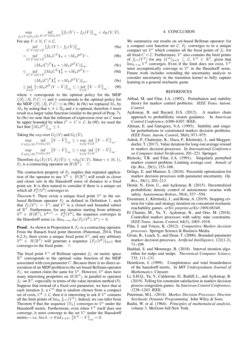 The Geometry of Robust Value Functions

On the Existence of the Augustin Mean

The existence of a unique Augustin mean and its invariance under the Aug...
Hao-Chung Cheng, et al. ∙

Getting more from the skyline operator through restricted skylines, regret minimizing sets and skyline ordering: a survey on their properties and comparison

Markov decision processes (MDPs) is a widely used mathematical framework for control design in stochastic environments, eg. density control of a swarm of agents (Açikmeşe and Bayard, 2012; Demir et al., 2015). It is also a fundamental framework for reinforcement learning, robotic motion planning and stochastic games (Filar and Vrieze, 2012; Li et al., 2019). An MDP can be solved for different objectives including minimum average cost, minimum discounted cost, reachability, among others (Puterman, 2014). Given an objective, solving an MDP is equivalent to computing the optimal policy and the optimal value function of a decision maker over the state space. Among different algorithms for computing the optimal policy, most are based on the Bellman equation that characterizes the value function as its fixed point.

In applications, it is common to encounter MDPs with uncertainties. When modeling an environment as a stochastic process, sampling techniques are often used to determine process parameters such as process costs or probabilities; such models are inherently uncertain. Another source of uncertainty is in stochastic games, where the cost and probability parameters change with respect to another decision maker’s strategy. While existing works focus on certain perturbations in MDPs

(Bielecki and Filar, 1991; Altman and Gaitsgory, 1993; Abbad and Filar, 1992), these results do not generalize to the analysis of overall behaviour of the MDP under all possible cost parameters in a compact set.

Additionally, how uncertainty in MDP cost parameters affect the outcome of value iteration type methods is not well studied. Dynamic programming on bounded MDPs is studied in Givan et al. (2000) for specifically interval sets, however convergence of over general compact sets is not considered. While computation of the fixed points of Bellman operator is the topic of numerous studies (Delage and Mannor, 2010), most focus on the convergence analysis of value iteration and its stopping criteria (Ashok et al., 2017; Eisentraut et al., 2019). However, they do not consider the relationship between bounds on the optimal value function and the uncertainty in cost. Similarly motivated, Haddad and Monmege (2018) analyzes entry-wise uncertain transition kernels by using graph-based MDP transformations. While we also derive bounds of an MDP due to uncertain parameters, we differ in our approach: our set-based framework allows for direct extraction of the value iteration trajectories with respect to the set of cost parameters. This differentiates our work from Haddad and Monmege (2018) due to their graphical abstraction of MDP, which allows for derivation of bounds but not extraction of value function trajectories.

Contributions: We characterize the solutions of a family of MDPs at once, represented as sets of MDPs. More specifically, we: (i) develop a characterization of MDPs with uncertain cost parameters; (ii) propose a set-based Bellman operator over non-empty compact sets; (iii) establish the contractivity of this set-based Bellman operator with the existence of a unique compact fixed point set.

2 Review of MDPs and Bellman Operator

Notation: Sets of N elements are given by [N]={0,…,N−1}. We denote the set of matrices of i rows and j columns with real (non-negative) valued entries as Ri×j(Ri×j+). Elements of sets and matrices are denoted by capital letters, X, while sets are denoted by cursive letters, X

. The ones column vector is denoted by

We consider a discounted infinite-horizon MDP defined by ([S],[A],P,C,γ) for a decision maker, where

At each time step t, the decision maker chooses an action a based on its current state s. The state-action pair (s,a)

At each time step, the decision maker chooses a policy that dictates the action chosen at each state s. We denote policy as a function π:RS×RA→R+, where π(s,a) denotes the probability that action a is chosen at state s. We also denote in shorthand, π(s)∈RA+ a probabilistic distribution vector over the action space at each state s. We denote the set of all feasible policies of an MDP by Π. In our context, it suffices to consider only deterministic, stationary policies i.e. π(s,a) is a time invariant function that returns 1 for exactly one action, and 0 for all other possible actions. The set of all such policies is denoted by Πd⊂Π.

For an MDP ([S],[A],P,C,γ), we are interested in minimizing the discounted infinite horizon expected cost, defined with respect to a policy π as

where γ∈(0,1) is the discount factor of future cost, st and at are the state and action taken at time step t, and s0 is the state that the decision maker starts from at t=0.

The minimum expected cost V⋆s is called the optimal value function. The policy π⋆ that achieves the optimal value function is called an optimal policy. In general, V⋆s is unique while π⋆ is not. It is well known that the set of optimal policies always includes at least one deterministic stationary policy (Puterman, 2014, Thm 6.2.11) — i.e. for each s, π(s,a) returns 1 for exactly one action, and 0 for all other possible actions.

Determining the optimal value function of a given MDP is equivalent to solving for the fixed point of the associated Bellman operator, for which a myriad of techniques exist (Puterman, 2014). We introduce the Bellman operator here as well as relating its fixed point to the corresponding MDP problem.

[Standard Bellman Operator] For a discounted infinite horizon MDP ([S],[A],P,C,γ), its associated Bellman operator fC:RS→RS is given component-wise by

In order to show that the Bellman operator has a unique fixed point, we consider the following operator property. [Contraction Operator] Let (X,d) be a complete metric space. An operator F:X↦X is a contracting operator if it satisfies

From the optimal value function V⋆, we can also derive a deterministic optimal policy from the Bellman operator as

Among different algorithms to determine the fixed point of the Bellman operator, value iteration (VI) is a commonly used and simple technique in which the Bellman operator is iteratively applied until the optimal value is reached — i.e. starting from any value function V0∈RS and k=1,…, we apply

The iteration scheme given by (5) converges to the fixed point of the corresponding discounted infinite horizon MDP. The stopping criteria of VI can be considered the over-approximation of the optimal value function. (Puterman, 2014, Thm. 6.3.1) For any initial value function V0∈RS, let {Vk}k∈N be the value function trajectory from (5). Whenever there exists ϵ>0, such that ∥∥Vk+1−Vk∥∥<ϵ(1−γ)2γ, then Vk+1 is within ϵ/2 of the fixed point V⋆, i.e. ∥∥Vk+1−V⋆∥∥<ϵ2. Lemma 2.3 connects relative convergence of the sequence {Vk}k∈N to absolute convergence towards V⋆ by showing that the former implies the latter.

We define a new metric space (H(RS),dH) based on the Banach space (RS,∥⋅∥∞) to serve as our set-based operator domain (Rudin and others, 1964), where H(RS) is the collection of non-empty compact subsets of RS equipped with partial order: for V,V′∈H(RS), V⪯V′ if V⊆V′. The metric dH is the Haussdorf distance (Henrikson, 1999) defined as

where cl is the closure operator. As we take the union of an uncountably many bounded sets, the resulting set may not be bounded, and therefore it is not immediately obvious that FC(V) maps into the metric space H(RS). We show this is true in Proposition 3.1. If C is compact, for all V∈H(RS), FC(V)∈H(RS). For a non-empty set A of some finite dimensional real vector space, let us define its diameter to be denoted as . The diameter of any compact set in a metric space is bounded.

where the norm of the second term ∥fC′(V)−fC′(V′)∥∞ must be upper bounded by ∥V−V′∥∞ due to contraction properties of fC′. Let X,X′∈∪(C,V)∈C×VfC(V). For the first term, we take ¯π to be the optimal strategy corresponding to fC′(V), then

Therefore, we have that ∥fC(V)−fC′(V′)∥∞<diam(C)+diam(V). Since it holds for all (C,V),(C′,V′)∈C×V then diam(∪(C,V)∈C×VfC(V))≤diam(C)+diam(V)<+∞ as C and V are bounded. ∎ Proposition 3.1 shows that FC is an operator from H(RS) to H(RS). Having established the space which it operates on, we can draw many parallels between FC and fC. Similar to the existence of a unique fixed point V⋆∈RS for operator fC, we consider whether a fixed point set of FC which satisfies FC(V⋆)=V⋆ exists, and if it is unique. To take the comparison further, since V⋆ is the optimal value function for an MDP problem defined by ([S],[A],P,C,γ), how does V⋆ relate to the family of optimal solutions that corresponds to the MDP family ([S],[A],P,C,γ)?

For any V∈H(RS) and C⊂RS×A closed and bounded, FC is a contracting operator under the Hausdorff distance.

Consider V, ¯V∈H(RS), to see that FC is a contraction, we need to show

Therefore, it suffices to prove

The contraction property of FC implies that repeated application of the operator to any V0∈H(RS) will result in closer and closer sets in the Hausdorff sense of distance to a fixed point set. It is then natural to consider if there is a unique set which all FkC(V0) converges to.

There exists a unique fixed point V⋆ to the set-based Bellman operator FC as defined in Definition 2.2, such that FC(V⋆)=V⋆, and V⋆ is a closed and bounded subset of RS. Furthermore, for any iteration starting from arbitrary V0∈H(RS), Vk+1=FkC(V0), the sequence converges in the Hausdorff sense i.e. limk→∞dH(FC(Vk),V⋆)=0. As shown in Proposition 3.1, FC is a contracting operator. From the Banach fixed point theorem (Puterman, 2014, Thm 6.2.3), there exists a unique fixed point V⋆, and any arbitrary V0∈H(RS) will generate a sequence {FC(Vk)}k∈N that converges to the fixed point. ∎

The fixed point V⋆ of Bellman operator fC on metric space RS corresponds to the optimal value function of the MDP associated with cost parameter C. Because there is no direct association of an MDP problem to the set-based Bellman operator FC, we cannot claim the same for V⋆. However, V⋆ does have many interesting properties on H(RS), in parallel to operator fC on RS, especially in terms of the value iteration method (5). Suppose that instead of a fixed cost parameter, we have that at each iteration k, a Ck that is random chosen from a compact set of costs, Ck∈C, then it is interesting to ask if V⋆ contains all the limit points of limkfCk(Vk). Indeed, we can infer from Theorem 3.1 that the sequence {Vk} converges to V⋆ under the Hausdorff metric. Furthermore, even when Vk itself does not converge, it must converge to the set V⋆ under the Hausdorff metric— i.e. .

We summarize our results on set-based Bellman operator: for a compact cost function set C, FC converges to to a unique compact set V⋆ which contains all the fixed points of fC for all fixed C∈C. Furthermore, V⋆ also contains the limit points of fCk(Vk) for any {Ck}k∈N⊆C, V0∈RS, given that limk→∞Vk converges. Even if the limit does not exist, Vk must asymptotically converge to V⋆ in the Hausdorff sense. Future work includes extending the uncertainty analysis to consider uncertainty in the transition kernel to fully capture learning in a general stochastic game.