In this paper, we extend the positivity-preserving, entropy stable first-order finite volume-type scheme developed for the one-dimensional compressible Navier-Stokes equations in [1] to three spatial dimensions. The new first-order scheme is provably entropy stable, design-order accurate for smooth solutions, and guarantees the pointwise positivity of thermodynamic variables for 3-D compressible viscous flows. Similar to the 1-D counterpart, the proposed scheme for the 3-D Navier-Stokes equations is discretized on Legendre-Gauss-Lobatto grids used for high-order spectral collocation methods. The positivity of density is achieved by adding an artificial dissipation in the form of the first-order Brenner-Navier-Stokes diffusion operator. Another distinctive feature of the proposed scheme is that the Navier-Stokes viscous terms are discretized by high-order spectral collocation summation-by-parts operators. To eliminate time step stiffness caused by the high-order approximation of the viscous terms, the velocity and temperature limiters developed for the 1-D compressible Navier-Stokes equations in [1] are generalized to three spatial dimensions. These limiters bound the magnitude of velocity and temperature gradients and preserve the entropy stability and positivity properties of the baseline scheme. Numerical results are presented to demonstrate design-order accuracy and positivity-preserving properties of the new first-order scheme for 2-D and 3-D inviscid and viscous flows with strong shocks and contact discontinuities. 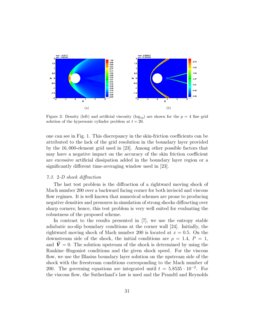 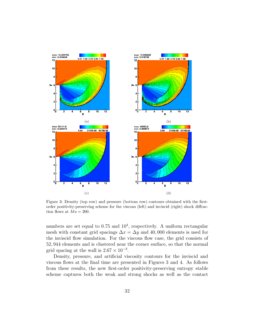 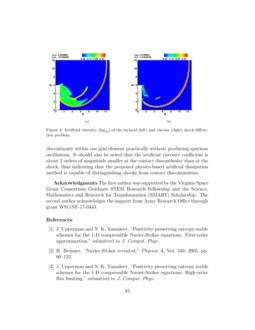 We use matrix stability analysis for a singlerate and multirate predicto...
Ketan Mittal, et al. ∙

The main objective of the present paper is to construct a first-order positivity-preserving entropy stable scheme defined on LGL grids which are used for high-order spectral collocation methods (e.g., CFNF ; CFNPSY ). To provide the positivity of thermodynamic variables, we construct new first-order artificial dissipation operators that are based on the Brenner regularization of the compressible Navier-Stokes equations UY_1Dlow ; UY . In contrast to the existing positivity-preserving schemes that rely on monotonicity properties of the Rusanov-type dissipation, the proposed method minimizes the amount of artificial dissipation required for pointwise positivity of density and temperature and uses novel velocity and temperature limiters to eliminate the time step stiffness for viscous flows with strong shock waves and contact discontinuities.

We consider the 3-D compressible Navier-Stokes equations in curvilinear coordinates (ξ1,ξ2,ξ3), which are written in conservation law form as follows:

is a vector of the conservative variables and

Fxm, and F(v)xm are the inviscid and viscous fluxes associated with the Cartesian coordinates (x1,x2,x3), which are given by

The viscous stresses in Eq. (2) are defined as follows:

where μ(T) is the dynamic viscosity, κ(T) is the thermal conductivity, and δi,j is the Kronecker delta. To close the Navier-Stokes equations, the following constituent relations are used:

where T is the temperature, Ru is the universal gas constant, Mw is the molecular weight of the gas, and cP is the specific heat capacity at constant pressure. Equation (1) is subject to boundary conditions that are assumed to satisfy the entropy inequality. Note that only static curvilinear unstructured grids are considered in the present analysis.

where μAD is an artificial viscosity and cT and cρ are positive tunable coefficients. Equations (1) and (4) are derived by using the following identies:

which are called the geometric conservation laws (GCL) TLGCL . Though, the GCL equations (5) are satisfied exactly at the continuous level, this is not the case at the discrete level TLGCL . A discussion on how the corresponding metric coefficients should be discretized to satisfy the GCL equation is presented elsewhere (e.g., see (TLGCL, ; GCLSS2019, )).

Both the Navier-Stokes and regularized Navier-Stokes equations are equipped with the same scalar entropy function S=−ρs and the corresponding entropy flux F=−ρsV, where s is the thermodynamic entropy and V is the velocity vector. The mathematical entropy, S(U), is convex and its Hessian matrix, ∂2S∂U2, is positive definite provided that ρ>0 and T>0 ∀x∈Ω, thus yielding a one-to-one mapping from the conservative to entropy variables, which are defined by WT≡∂S∂U. For entropy stable boundary conditions, the following entropy inequality holds for both Eqs. (1) and (4):

Similar to the first-order scheme developed in one spatial dimension in UY_1Dlow , the proposed first-order scheme for the 3-D Navier-Stokes equations is discretized on the same Legendre-Gauss-Lobatto (LGL) points used for high-order spectral collocation operators. In the one-dimensional setting, the physical domain is divided into K non-overlapping elements [xk1,xkNp] with K+1 nonuniformly distributed points, so that xk1=x(k−1)Np. The discrete solution inside each element is defined on the LGL points, xk=[xk1,…,xkNp]⊤, associated with the Lagrange polynomial basis of degree p=Np−1. These local points xk are referred to as solution points.

The derivatives of the viscous fluxes in (4) are discretized by high-order spectral collocation operators that satisfy the summation-by-parts (SBP) property CFNF ; SN1 . This mimetic property is achieved by approximating the first derivative by using the following discrete operator, D:

where P is a diagonal mass matrix and Q is a stiffness matrix. Only diagonal-norm SBP operators are considered herein, which is critical for proving the entropy inequality at the discrete level CFNF .

Along with the solution points, we also define a set of intermediate points ¯xk=[¯xk0,…,¯xkNp]⊤ prescribing bounding control volumes around each solution point. These points referred to as flux points form a complementary grid whose spacing is precisely equal to the diagonal elements of the positive definite matrix P in Eq. (7), i.e., Δ¯x=P1, where ¯x=[¯x0,…,¯xNp]⊤ is a vector of flux points, 1=[1,…,1]⊤, and Δ is an Np×(Np+1) matrix corresponding to the two-point backward difference operator CFNF ; YC3 . As has been proven in FCNYS , all discrete SBP derivative operators can be recast into the following telescopic flux form:

where ¯f is a high-order flux vector defined at the flux points. Note that the above telescopic flux form also satisfies the generalized SBP property FCNYS .

with similar definitions for other directions and operators Qξi, Δξi and Bξi. Also, the following notation is used hereafter: Pijk=Pi,iPj,jPk,k and Pij=Pi,iPj,j where Pi,i is the scalar i-th diagonal entry of PN.

The metric coefficients are also discretized by using the high-order SBP operators (Eq. (7))such that the GCL equations given by Eq. (5) are satisfied exactly at the discrete level TLGCL . The discrete approximation of the scalar metric coefficient J∂ξl∂xm at the solution point →ξijk is denoted ^alm(→ξijk). The block diagonal matrix [^alm] contains blocks with entries ^alm(→ξijk)I5×5 where I5×5

is the identity matrix of size 5. The specific formulas for

The artificial viscosity coefficient, μAD, in Eq. (4) is constructed as a function of the entropy equation residual and consists of three major components: 1) entropy residual, 2) sensor functions, and 3) upper bound of the artificial viscosity coefficient. In this section, we make use of the following globally defined parameters: δ=(1K)1d and L∗=(K∑i=1Vi)1d, where d is the spatial dimensionality, K is the total number of elements used, and Vi is the volume on the i-th element.

We directly generalize the 1-D entropy residual presented in UY to three spatial dimensions. The finite element residual of the entropy equation on the k-th element is approximated as follows:

To construct the residual-based sensor, we first define an auxiliary pointwise sensor as follows:

where ∥⋅∥ is the magnitude of a vector. In the above equation, ∇hΘm(→ξijk)=[Θmx1Θmx2Θmx3]⊤→ξijk, where Θmxj(→ξijk) is the m-th component of Θxj at →ξijk and Θxj is the pth-order approximation of the gradient of the entropy variables CFNPSY , and c is the speed of sound. The entropy residual sensor for the k-th element, Snk, is then defined as follows:

To identify regions where the amount of artificial dissipation can be reduced without generating spurious oscillations, we augment the entropy residual sensor with the compression and pressure gradient sensors, which are used only if the residual sensor Snk>0 on the k-th element.

To minimize the amount of artificial dissipation near expansion waves, the compression sensor, Cnk, on the k-th element is defined by using the integral of the divergence of the velocity filed over this element

where ∇h⋅→V is the approximation of the divergence of the velocity vector, and b, Cn∗, and a, are tunable parameters that are set to be 0.1, 0.2, and 50 for all problems considered.

The pressure, Pnk, sensor aims to reduce the amount of artificial dissipation near weak shock waves and is defined as follows:

On each k-th element where Snk>0, we define a reference grid spacing, hk, that is used to compute an upper bound of the artificial viscosity coefficient, μkmax. The technique presented in this section for calculating hk is used for all test problems considered in Section 7.

First, we compute the following array of reference lengths, Lk, defined at each solution point of the k-th element:

Then, an average grid spacing on the k-th element is evaluated as follows:

Finally, the local reference grid spacing, hk, is given by

As in UY , the artificial viscosity for each element is constructed by first finding its physics-based upper bound, μmax. The elementwise scalar function, μmax

, is constructed such that it is proportional to two-point jumps in the maximum eigenvalue of the inviscid flux Jacobian. If

where hk is a reference grid spacing defined in Section 4.3, P1,1 is the smallest distance between flux points of the 1-D computational element, and c(→ξijk) is the speed of sound at →ξijk. Note that μkmax is constructed such that it achieves its maximum value at shocks.

The velocity gradient components in Eq. (21) are approximated by using the following two-point discretizations:

for m=1,2,3. At element interfaces, we also include velocity jumps formed by the collocated states of elements that share the entire face. The gradient of the √γP term in Eq. (21) is calculated in a similar fashion.

The globally continuous artificial viscosity μADk is then constructed by using the following smoothing procedure. At each element vertex, we from a unique vertex viscosity coefficient, μveri=maxk∈Iiμkmax, where Ii contains indices of all elements that share the i

-th grid vertex. After that, the globally continuous artificial viscosity is obtained by using the tri-linear interpolation of 8 vertex viscosities,

μveri, of the given hexahedral element.

We now present a positivity-preserving, entropy stable first-order scheme for the regularized 3-D compressible Navier-Stokes equations (4). Hereafter, νi=[ρi→ViTi]⊤ is used to denote the vector of primitive variables at the i-th solution point. We also make substantial use of the logarithmic, harmonic, arithmetic, and geometric averages, which are denoted for quantities z1 and z2 by using the following subscript notation: zL, zH, zA, and zG, respectively. Note that the following inequalities hold for any z1>0, z2>0: zH/2<min(z1,z2)≤zH≤zG≤zL≤zA≤max(z1,z2).

The first-order scheme on a given element is approximated on the same LGL points used for the high-order scheme. The first-order element treats solution points in a finite volume manner with the flux points acting as control volume edges and can be written as

where ^¯f(in)l and ^¯f(AD1)^¯σ,l, ^¯f(AD1)l are first-order inviscid and artificial dissipation fluxes, ^f(v)l,l=1,2,3, are the high-order physical fluxes, and ^gl are high-order penalties that are identical to those used in CFNPSY . The way how first-order inviscid and artificial dissipation fluxes are constructed is discussed next.

The inviscid fluxes in Eq. (23) are represented as the sum of entropy conservative and entropy dissipative terms: ^¯f(in)l=^¯f(EC)l−^¯f(ED)l. The exact form of ^¯f(ED)l is presented in Section 5.4.

The entropy conservative flux, ^¯f(EC)l, is defined as follows:

In the present analysis, we use the entropy conservative flux developed in Chand . Comparing Eq. (24) with the high-order entropy stable flux in CFNPSY , we note that they are equivalent at the element faces (¯i∈{0,N}) and only differ at the interior points. The high-order interpolation of the metric terms to the flux points is sufficient for proving Lemma 1.

The inviscid flux ^¯f(EC)l given by Eq. (24) is freestream preserving and entropy conservative, so that the following equation holds:

Hence, ^¯f(EC)l given by Eq. (24) has the same total entropy contribution on each element as the high-order entropy consistent flux in CFNPSY .

where the last equality follows from the fact that the metric coefficients satisfy the discrete GCL equation given by Eq. (10).