First class type equalities, in the form of generalized algebraic data types (GADTs), are commonly found in functional programs. However, first-class representations of other relations between types, such as subtyping, are not yet directly supported in most functional programming languages. We present several encodings of first-class subtypes using existing features of the OCaml language (made more convenient by the proposed modular implicits extension), show that any such encodings are interconvertible, and illustrate the utility of the encodings with several examples. 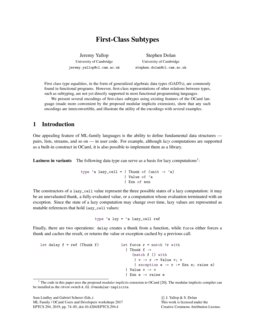 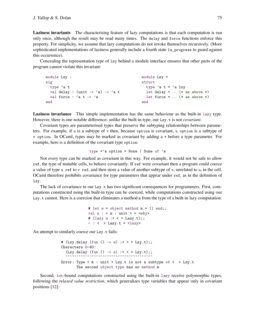 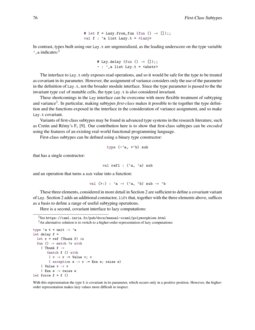 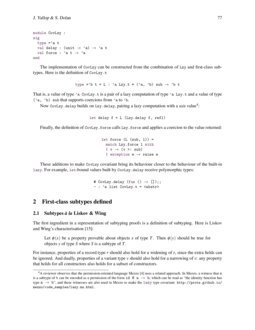 A simpler encoding of indexed types

The development of programming languages can be quite complicated and co...
Birthe van den Berg, et al. ∙

Context. An extension method is a method declared in a package other tha...
Guillermo Polito, et al. ∙

One appealing feature of ML-family languages is the ability to define fundamental data structures — pairs, lists, streams, and so on — in user code. For example, although lazy computations are supported as a built-in construct in OCaml, it is also possible to implement them as a library.

The following data type can serve as a basis for lazy computations111 The code in this paper uses the proposed modular implicits extension to OCaml [21]. The modular implicits compiler can be installed as the opam switch 4.02.0+modular-implicits. :

Finally, there are two operations: delay creates a thunk from a function, while force either forces a thunk and caches the result, or returns the value or exception cached by a previous call.

The characterising feature of lazy computations is that each computation is run only once, although the result may be read many times. The delay and force functions enforce this property. For simplicity, we assume that lazy computations do not invoke themselves recursively. (More sophisticated implementations of laziness generally include a fourth state In_progress to guard against this occurrence).

Concealing the representation type of lzy behind a module interface ensures that other parts of the program cannot violate this invariant:

This simple implementation has the same behaviour as the built-in lazy type. However, there is one notable difference: unlike the built-in type, our Lzy.t is not covariant.

Not every type can be marked as covariant in this way. For example, it would not be safe to allow ref, the type of mutable cells, to behave covariantly. If ref were covariant then a program could coerce a value of type u ref to v ref, and then store a value of another subtype of v, unrelated to u, in the cell. OCaml therefore prohibits covariance for type parameters that appear under ref, as in the definition of lzy.

An attempt to similarly coerce our Lzy.t fails:

In contrast, types built using our Lzy.t are ungeneralized, as the leading underscore on the type variable ’_a indicates:222See https://caml.inria.fr/pub/docs/manual-ocaml/polymorphism.html

only exposes read operations, and so it would be safe for the type to be treated as covariant in its parameter. However, the assignment of variance considers only the use of the parameter in the definition of

Lzy.t, not the broader module interface. Since the type parameter is passed to the the invariant type ref of mutable cells, the type Lzy.t is also considered invariant.

These shortcomings in the Lzy interface can be overcome with more flexible treatment of subtyping and variance333An alternative solution is to switch to a higher-order representation of lazy computations: . In particular, making subtypes first-class makes it possible to tie together the type definition and the functions exposed in the interface in the consideration of variance assignment, and so make Lzy.t covariant.

Variants of first-class subtypes may be found in advanced type systems in the research literature, such as Cretin and Rémy’s F_ι [10]. Our contribution here is to show that first-class subtypes can be encoded using the features of an existing real-world functional programming language.

First-class subtypes can be defined using a binary type constructor:

that has a single constructor:

and an operation that turns a sub value into a function:

Here is a second, covariant interface to lazy computations:

The implementation of CovLzy can be constructed from the combination of Lzy and first-class subtypes. Here is the definition of CovLzy.t

Now CovLzy.delay builds on Lzy.delay, pairing a lazy computation with a sub value444A reviewer observes that the permission-oriented language Mezzo [5] uses a related approach. In Mezzo, a witness that s is a subtype of t can be encoded as a permission of the form id @ a -> b, which can be read as “the identity function has type a -> b”, and these witnesses are also used in Mezzo to make the lazy type covariant: http://protz.github.io/mezzo/codesamples/lazy.mz.html.:

Finally, the definition of CovLzy.force calls Lzy.force and applies a coercion to the value returned:

These additions to make CovLzy covariant bring its behaviour closer to the behaviour of the built-in lazy. For example, let-bound values built by CovLzy.delay receive polymorphic types:

Let ϕ(x) be a property provable about objects x of type T. Then ϕ(y) should be true for objects y of type S where S is a subtype of T.

The Curry-Howard correspondence turns Liskov and Wing’s characterisation of subtyping into an executable program.

With a propositions-as-types perspective [19], a property provable about objects of type T is represented as a type ϕ(T) involving T, and a proof of that property is a term of that type 555At least, in total languages. In OCaml the waters are muddied by side-effects and nontermination.. Liskov and Wing’s proposition that S is a subtype of T corresponds to the following (poly)type:

First, although Liskov and Wing’s characterisation is couched in terms of objects x and y, it is really about their types T and S. To see this, consider that, in the characterisation, it is sufficient to know y’s type to know that Φ(y) holds. Since the characterisation only involves properties about all the objects of a type, not properties of individual objects, there is no need for dependent types in the type corresponding to the subtyping proposition.

Here is a function that prints arrays by calling the name method of each element:

To call name, print_array does not need to know the full element type: it needs only to know that there is a method name returning string. OCaml gives print_array a row type, indicating that the element type may have other methods:

But rows are sometimes too inflexible. Given two arrays a, b, of different element types

Using first-class subtypes it is possible to combine iterations over arrays whose element types belong to the same subtyping hierarchy.

A third class of examples arises from selective abstraction, where an abstract type comes with a proof of a property about that type. For example, here is a module that exports a type t along with a proof that t is a subtype of int:

Outside the module, values of type t can be coerced to int, but not vice versa. This approach supports a style similar to refinement types, in which abstraction boundaries distinguish values of a type for which some additional predicate has been shown to hold.

These are known as partially abstract types [7], and are available as a language feature in OCaml [14] and Moby [12]. However, implementing these via first-class subtypes allows more flexibility: for example, they allow some of the methods of an object type to be hidden from the exposed interface, and also support the dual of private types (called invisible types [17]), and zero cost-coercions [6], where coercions in both directions are available, but actual type equality is not exposed.

Dual to abstraction, combining first-class subtypes with OCaml’s first-class polymorphism encodes bounded quantification. For example, the type ∀α≤t.α→t might be written as follows:

Finally, first-class subtypes can express proofs of variance. For example, the covariance of list can be represented by a value of the following type:

Amin and Tate [2] present an encoding of first-class subtypes in Java, which they use to demonstrate a soundness bug. They use Java’s bounded quantification to define a type Constrain<A, B> which is well-formed only when A ≤ B. Then, the type ∃X≥T.Constrain<U,X> corresponds to a subtyping witness (U,T) sub: if this type is inhabited, then some X≥T exists making Constrain<U, X> well-formed, giving U ≤ X ≤ T. Unfortunately, in Java (unlike OCaml), the value null inhabits every reference type, giving an invalid subtyping witness that allows any type to be coerced to any other.

The encodings suffer from some awkwardness, since contexts must be applied explicitly, unlike the equalities revealed by pattern matching with

With language support for subtype witnesses, coercions would still be explicit, but constraints in scope could be implicitly lifted through contexts, and inversion principles could be applied.

The encodings suffer from some awkwardness, since contexts must be applied explicitly, unlike the equalities revealed by pattern matching with

With language support for subtype witnesses, coercions would still be explicit, but constraints in scope could be implicitly lifted through contexts, and inversion principles could be applied.