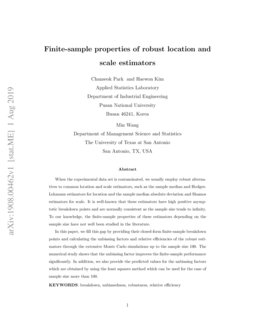 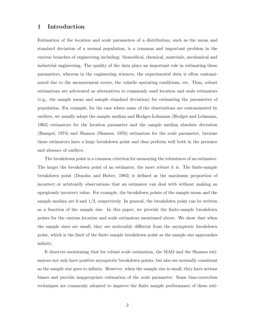 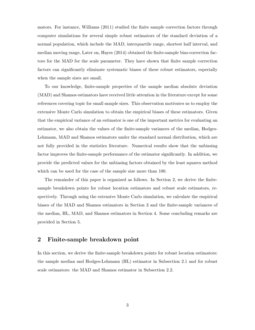 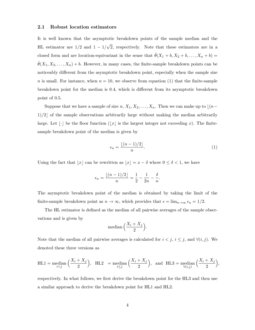 Estimation of the location and scale parameters of a distribution, such as the mean and standard deviation of a normal population, is a common and important problem in the various branches of engineering including: biomedical, chemical, materials, mechanical and industrial engineering. The quality of the data plays an important role in estimating these parameters, whereas in the engineering sciences, the experimental data is often contaminated due to the measurement errors, the volatile operating conditions, etc. Thus, robust estimations are advocated as alternatives to commonly used location and scale estimators (e.g., the sample mean and sample standard deviation) for estimating the parameters of population. For example, for the case where some of the observations are contaminated by outliers, we usually adopt the sample median and Hodges-Lehmann

(Hodges and Lehmann, 1963) estimators for the location parameter and the sample median absolute deviation (Hampel, 1974) and Shamos (Shamos, 1976) estimators for the scale parameter, because these estimators have a large breakdown point and thus perform well both in the presence and absence of outliers.

It deserves mentioning that for robust scale estimation, the MAD and the Shamos estimators not only have positive asymptotic breakdown points, but also are normally consistent as the sample size goes to infinity. However, when the sample size is small, they have serious biases and provide inappropriate estimation of the scale parameter. Some bias-correction techniques are commonly adopted to improve the finite sample performance of these estimators. For instance, Williams (2011) studied the finite sample correction factors through computer simulations for several simple robust estimators of the standard deviation of a normal population, which include the MAD, interquartile range, shortest half interval, and median moving range, Later on, Hayes (2014) obtained the finite-sample bias-correction factors for the MAD for the scale parameter. They have shown that finite sample correction factors can significantly eliminate systematic biases of these robust estimators, especially when the sample sizes are small.

To our knowledge, finite-sample properties of the sample median absolute deviation (MAD) and Shamos estimators have received little attention in the literature except for some references covering topic for small sample sizes. This observation motivates us to employ the extensive Monte Carlo simulation to obtain the empirical biases of these estimators. Given that the empirical variance of an estimator is one of the important metrics for evaluating an estimator, we also obtain the values of the finite-sample variances of the median, Hodges-Lehmann, MAD and Shamos estimators under the standard normal distribution, which are not fully provided in the statistics literature. Numerical results show that the unbiasing factor improves the finite-sample performance of the estimator significantly. In addition, we provide the predicted values for the unbiasing factors obtained by the least squares method which can be used for the case of the sample size more than 100.

Suppose that we have a sample of size n, X1,X2,…,Xn. Then we can make up to ⌊(n−1)/2⌋ of the sample observations arbitrarily large without making the median arbitrarily large. Let ⌊⋅⌋ be the floor function (⌊x⌋ is the largest integer not exceeding x). The finite-sample breakdown point of the median is given by

Using the fact that ⌊x⌋ can be rewritten as ⌊x⌋=x−δ where 0≤δ<1, we have

Note that the median of all pairwise averages is calculated for i<j, i≤j, and ∀(i,j). We denoted these three versions as

which is equivalent to k2−2nk+⌊(n2−1)/2⌋≥0. The finite-sample breakdown point of the HL3 is then given by ϵn=k∗/n, where

The asymptotic breakdown point of HL3 is given by ϵ=limn→∞ϵn. Using ⌊x⌋=x−δ where 0≤δ<1, we can rewrite (3) as

Similar to the case of the HL1, we obtain that the closed-form finite-sample breakdown point of the HL2 estimator is given by

For robust scale estimation, we consider the MAD (Hampel, 1974) and the Shamos estimator (Shamos, 1976). The MAD is given by

where ~μ=median(Xi) and Φ−1(3/4) is needed to make this estimator consistent under the normal distribution (Rousseeuw and Croux, 1993). This resembles the median and its finite-sample breakdown point is the same as that of the median in (1). The Shamos estimator is given by

where √2Φ−1(3/4) is needed to make this estimator consistent under the normal distribution (Lèvy-Leduc et al., 2011).

Of particular note is that the Shamos estimator resembles the HL1 estimator by replacing the Walsh averages by pairwise differences. Thus, its finite-sample breakdown point is the same as that of the HL1 estimator in (4). In the case of the HL estimator, the median is calculated for i<j, i≤j, and ∀(i,j), but the median in the Shamos estimator is calculated only for i<j because |Xi−Xj|=0 for i=j. Note that the MAD and Shamos estimators are in a closed form and are scale-equivariant in the sense that ^θ(aX1+b,aX2+b,…,aXn+b)=|a|⋅^θ(X1,X2,…,Xn). In Table 1, we provide the finite-sample breakdown points of the estimators considered in this paper. Also, we provide the plots of these values in Figure 1.

As mentioned above, the MAD in (6) and the Shamos estimator in (7) are normally consistent, that is, as the sample size goes to infinity, it converges to the standard deviation σ under the normal distribution, N(μ,σ). However, when the sample size is small, they have serious biases. In this section, we obtain the unbiasing factors for the MAD and Shamos estimators through the extensive Monte Carlo simulation. It deserves mentioning that the location estimators such as the median and the Hodges-Lehmann estimator have no bias under the normal distribution.

Similarly, an empirically unbiased Shamos estimator is given by

where Bn is the empirical bias of the SH.

Also, we can obtain the least squares estimate An using the method of Williams (2011) after the logarithm transformation which is given by

for the case of odd and even values of

n separately. However, for a large value of n, the gain in precision may not be noticeable as Figure 2 shows that there is no noticeable difference in the case of the odd and even values of n.

respectively. In Table 3, we provide the estimated biases of the MAD and Shamos estimators. These results show that the estimated biases are very accurate up to the fourth decimal point. Also, there is no noticeable difference between the two estimates by Hayes (2014) and Williams (2011).

It is well known that the sample standard deviation Sn is not unbiased under the normal distribution. To make it unbiased, the unbiasing factor c4(n) is widely used so that Sn/c4(n) is unbiased. We suggest to use c5 and c6 notations for the unbiasing factors of the MAD and Shamos estimators, respectively. Then we can obtain the unbiased MAD and Shamos estimators for any value of n given by

In this section, through the extensive Monte Carlo simulation, we calculate the finite-sample variances of the median, HL, MAD and Shamos estimators under the standard normal distribution. We generated a sample of size n from the standard normal distribution and calculated their empirical variances for a given value of n. We repeated this simulation ten million times (I=107) to obtain the empirical variance for each of n=2,3,…,100.

It should be noted that the values of the asymptotic relative efficiency (ARE) of various estimators are known. Here the ARE is defined as

For the case when n>100, we suggest to estimate these values based on Hayes (2014) or Williams (2011) as we did the biases in the previous section. We suggest the following models to obtain these values for n>100:

One can also use the method based on Williams (2011). For brevity, we used the method based on Hayes (2014). To estimate these values for n>100, we obtained the empirical REs in Table 6 for n=109, 110, 119, 120, …, 499, 500. Notice that Figure 3 indicates that it is reasonable to estimate the values for the median and MAD in the case of odd and even values of n separately. Using the large values of n, we can estimate the above coefficients. For this, we use the simulation results in Tables 5 and 6. Then the least squares estimates based on the method of Hayes (2014) are given by

In Tables 7 and 8, we also calculated the REs of the afore-mentioned estimators for n=1,2,…,100 using the above empirical variances. For n>100, one can also easily obtain the REs using the above estimated variances. It should be noted that the REs of the median and HL estimators are one for n=1,2. When n=1,2, the median and the HL are essentially the same as the sample mean. Note that the HL1 is not available for n=1.

Thus, the RE of the HL1 should be one. In this case, as expected, the finite-sample breakdown is zero as provided in Table 1.

In this paper, we studied the finite-sample properties of the sample median and Hodges-Lehmann estimators for location and the sample median absolute deviation and Shamos estimators for scale. We first obtained closed-form finite-sample breakdown points for these robust location and scale estimators for the population parameters. We then calculated the unbiasing factors and relative efficiencies of the MAD and the Shamos estimators for the scale parameter through the extensive Monte Carlo simulations up to the sample size 100. The numerical study showed that the unbiasing factor significantly improves the finite-sample performance. In addition, we also provided the predicted values for the unbiasing factors which are obtained by using the least squares method which can be used for the case of sample size more than 100. To facilitate the implementation of the proposed method, we developed the R package library, which will be available at the author’s personal web page.

This work was supported by the National Research Foundation of Korea (NRF) grant funded by the Korea government (No. NRF-2017R1A2B4004169).