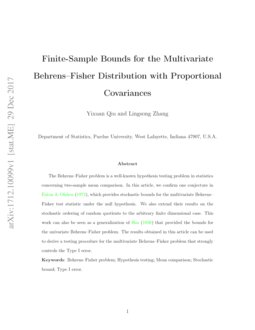 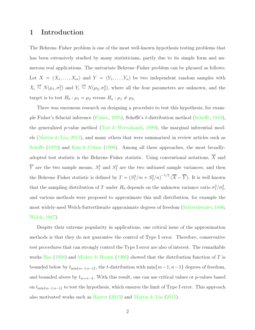 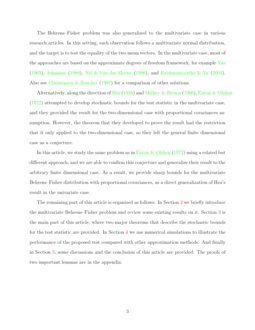 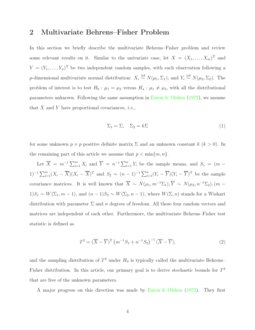 We show how to calculate individual terms of the Edgeworth series to app...
Jan Vrbik, et al. ∙

Fisher-Rao distance on the covariance cone

On p-value combination of independent and frequent signals: asymptotic efficiency and Fisher ensemble

The Behrens–Fisher problem is one of the most well-known hypothesis testing problems that has been extensively studied by many statisticians, partly due to its simple form and numerous real applications. The univariate Behrens–Fisher problem can be phrased as follows: Let X=(X1,…,Xm) and Y=(Y1,…,Yn) be two independent random samples with Xiiid∼N(μ1,σ21) and Yiiid∼N(μ2,σ22), where all the four parameters are unknown, and the target is to test H0:μ1=μ2 versus Ha:μ1≠μ2.

There was enormous research on designing a procedure to test this hypothesis, for example Fisher’s fiducial inference (Fisher, 1935), Scheffé’s t-distribution method (Scheffé, 1943), the generalized p-value method (Tsui & Weerahandi, 1989), the marginal inferential models (Martin & Liu, 2015), and many others that were summarized in review articles such as Scheffé (1970) and Kim & Cohen (1998). Among all these approaches, the most broadly-adopted test statistic is the Behrens–Fisher statistic. Using conventional notations, ¯¯¯¯¯X and ¯¯¯¯Y are the two sample means, S21 and S22

are the two unbiased sample variances, and then the Behrens–Fisher statistic is defined by

, and various methods were proposed to approximate this null distribution, for example the most widely-used Welch-Satterthwaite approximate degrees of freedom

Despite their extreme popularity in applications, one critical issue of the approximation methods is that they do not guarantee the control of Type I error. Therefore, conservative test procedures that can strongly control the Type I error are also of interest. The remarkable works Hsu (1938) and Mickey & Brown (1966) showed that the distribution function of T is bounded below by tmin{m−1,n−1}, the t-distribution with min{m−1,n−1} degrees of freedom, and bounded above by tm+n−2. With this result, one can use critical values or p-values based on tmin{m−1,n−1} to test the hypothesis, which ensures the limit of Type I error. This approach also motivated works such as Hayter (2013) and Martin & Liu (2015).

The Behrens–Fisher problem was also generalized to the multivariate case in various research articles. In this setting, each observation follows a multivariate normal distribution, and the target is to test the equality of the two mean vectors. In the multivariate case, most of the approaches are based on the approximate degrees of freedom framework, for example

In this article, we study the same problem as in Eaton & Olshen (1972) using a related but different approach, and we are able to confirm this conjecture and generalize their result to the arbitrary finite dimensional case. As a result, we provide sharp bounds for the multivariate Behrens–Fisher distribution with proportional covariances, as a direct generalization of Hsu’s result in the univariate case.

The remaining part of this article is organized as follows. In Section 2 we briefly introduce the multivariate Behrens–Fisher problem and review some existing results on it. Section 3 is the main part of this article, where two major theorems that describe the stochastic bounds for the test statistic are provided. In Section 4 we use numerical simulations to illustrate the performance of the proposed test compared with other approximation methods. And finally in Section 5, some discussions and the conclusion of this article are provided. The proofs of two important lemmas are in the appendix.

In this section we briefly describe the multivariate Behrens–Fisher problem and review some relevant results on it. Similar to the univariate case, let X=(X1,…,Xm)T and Y=(Y1,…,Yn)T be two independent random samples, with each observation following a p-dimensional multivariate normal distribution: Xiiid∼N(μ1,Σ1), and Yiiid∼N(μ2,Σ2). The problem of interest is to test H0:μ1=μ2 versus Ha:μ1≠μ2, with all the distributional parameters unknown. Following the same assumption in Eaton & Olshen (1972), we assume that X and Y have proportional covariances, i.e.,

for some unknown p×p positive definite matrix Σ and an unknown constant k (k>0). In the remaining part of this article we assume that p<min{m,n}.

and the sampling distribution of T2 under H0 is typically called the multivariate Behrens–Fisher distribution. In this article, our primary goal is to derive stochastic bounds for T2 that are free of the unknown parameters.

A major progress on this direction was made by Eaton & Olshen (1972). They first showed that under H0,

where ⪯st stands for the stochastic ordering, ν is any integer satisfying p≤ν≤min{m−1,n−1}, and W(n) stands for a W(Ip,n)random matrix that is independent of Z.

However, in Eaton & Olshen (1972), (4) was only proved for the case of p=2, since the underlying theory did not generalize to higher dimensions. To overcome this difficulty, in this article we use a different set of techniques to prove that (4) also holds for p>2. The main results are presented in Section 3.

We first present two lemmas that are the keys to our main theorems, whose proofs are given in the appendix. Lemma 1 studies the property of a linear combination of Z2irandom variables, where Ziiid∼N(0,1).

Lemma 1 itself gives some general properties of the distribution family represented by Tθ, and in this article the lemma is mainly used to show the conclusion below, which is the central technical tool to prove our main theorems.

To present the main theorems of this article, we first introduce two useful concepts: the majorization of vectors (Olkin & Marshall, 2016), and the exchangeability of a sequence of random vectors.

Intuitively, x≺my indicates that x and y have the same total quantity, but y is more “spread out”, or less “equally allocated” than x.

With these notations, the first main result of this article is summarized in Theorem 1.

Let W=(W1,…,Wr) be an exchangeable sequence of positive definite random matrices of size p×p, and let Z be a N(0,Ip) random vector that is independent of W. If ψ=(ψ1,…,ψr) and η=(η1,…,ηr) are two sequences of nonnegative constants such that ψ≺mη, then

Moreover, ϕ is continuous and exchangeable on its arguments, so it satisfies the condition of Theorem 2.4 of Eaton & Olshen (1972). As a consequence of the theorem, it follows that

where the expectation is taken on the joint distribution of

Theorem 1 does not put any specific distributional assumptions on W, so it is more general than the Behrens–Fisher problem setting where Wi’s follow Wishart distributions. Applying Theorem 1 to the multivariate Behrens–Fisher test statistic in (2), we obtain the following result:

For the multivariate Behrens–Fisher test statistic (2), under H0 and the proportional covariances assumption (1),

where Fa,b(⋅) is the distribution function of an F-distribution with a and b degrees of freedom.

Using the inequality in Theorem 2, a p-value of the test can be computed as

and it is guaranteed that under H0, pr{\textscpval(T2)≤α}≤α.

Figure 1 illustrates the results for significance level α=0.05. The first four methods correspond to the the existing solutions, and the “F-Bound” method is the one based on (7). As can be seen from the last three columns of the plot matrix, which correspond to the “large sample” case, all five solutions perform reasonably well. However, when the sample sizes are small, as in the first three columns of the plot matrix, the existing methods tend to exaggerate the Type I error a lot, and even double the pre-specified significance level in some situations. On the contrary, even if the F-Bound method is conservative in worst cases, it always guarantees the control of Type I error.

This phenomenon is even more clear under the α=0.01 situation, as is shown in Figure 2. Under some circumstances the existing methods inflate the Type I error more than four times, which may cause unreliable conclusions in real applications. Same as the previous case, the F-Bound method is always valid despite its conservativeness.

To summarize, the simulation study indicates that the theoretical result obtained in this article is useful to derive a testing procedure for the multivariate Behrens–Fisher problem that guarantees the Type I error control, which is crucial for many scientific studies.

In this article we have revisited the multivariate Behrens–Fisher problem with the proportional covariances assumption, and have derived finite-sample lower and upper bounds for the null distribution of the test statistic. This result extends the previous work by Hsu (1938) for the univariate case and Eaton & Olshen (1972) for the two-dimensional case, and can be used to create a testing procedure that strongly controls the Type I error for the multivariate Behrens–Fisher problem.

It is true that the proportional covariances assumption (1) is a moderately strong restriction, and one may hope to verify the result for the most general forms of Σ1 and Σ2. In this article, this assumption is made based on the following two considerations. First, the original motivation of this article was to generalize Theorem 3.1 of Eaton & Olshen (1972), about the stochastic ordering of a series of random quotients, from two-dimension to any finite dimension. However, the test statistic for the most general Behrens–Fisher problem does not belong to this type of random quotient. Second, the technical difficulty of the general case is expected to be formidable. As can be seen from Lemma 2, there exists some concavity property for the proportional covariances case, which greatly helps proving the bounds. However, many examples can be given to show that such properties are totally destroyed in the general case, so some more advanced techniques need to be developed in order to fully solve the general situation. We leave this possibility for future research.

Since θ1,…,θp are exchangeable in F(t;θ), we will prove the case for i=1,j=2 without loss of generality. Define the random variable T12=Z21/θ1+Z22/θ2 with the distribution function F12(t;θ1,θ2), and let ϕ(x) and Φ(x) denote the density function and distribution function of N(0,1), respectively, then

Similarly, by switching the order of a and b and with another change of variable η=π/2−ρ, it follows that

whenever 0<a<b, which concludes the proof of c). ∎

are the associated eigenvectors. Again we will omit the

λ arguments in the relevant quantities above whenever appropriate.

Theorem 9 and Theorem 10 of Lancaster (1964) provide explicit expressions for ∂2di/∂λ2, where the former assumes di’s are distinct while the latter considers multiplicity of eigenvalues. For now we shall assume that di’s are all distinct for brevity of the proof. The same technique applies to the more general case.

is the zero matrix. Also define

Now consider the cumulative sum of eigenvalues from the bottom, defined as ci=∑pj=idj, whose second derivative is given by