Two types of finite element spaces on a tetrahedron are constructed for divdiv conforming symmetric tensors in three dimensions. Besides the normal-normal component, another trace involving combination of first order derivatives of stress should be continuous across the face. Due to the rigid of polynomials, the symmetric stress tensor element is continuous at vertices, and on the plane orthogonal to each edge. Hilbert complex and polynomial complexes are presented and several decomposition of polynomial vector and tensors spaces are revealed from the complexes. The constructed divdiv conforming elements are exploited to discretize the mixed formulation of the biharmonic equation. Optimal order and superconvergence error analysis is provided. Hybridization is given for the ease of implementation. 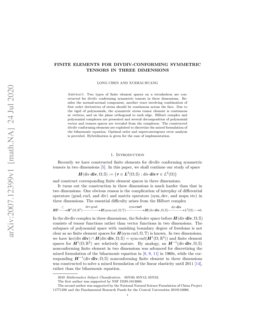 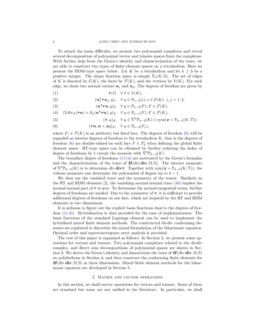 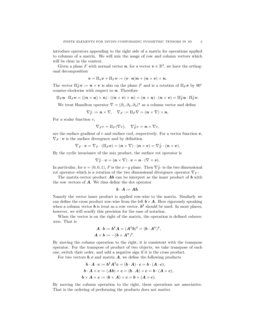 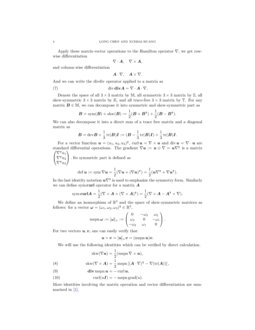 Recently we have constructed finite elements for divdiv conforming symmetric tensors in two dimensions [5]. In this paper, we shall continue our study of space

In the divdiv complex in three dimensions, the Sobolev space before H(divdiv,Ω;S)

consists of tensor functions rather than vector functions in two dimensions. The subspace of polynomial space with vanishing boundary degree of freedoms is not clear as no finite element spaces for

H(symcurl,Ω,T) is known. In two dimensions, we have ker(divdiv)∩H(divdiv,Ω;S)=symcurl(H1(Ω;R2)) and finite element spaces for H1(Ω;R2) are relatively mature. By analogy, an H−1(divdiv,Ω;S) nonconforming finite element in two dimensions was advanced for discretizing the mixed formulation of the biharmonic equation in [8, 9, 11] in 1960s, while the corresponding H−1(divdiv,Ω;S) nonconforming finite element in three dimensions was constructed to solve a mixed formulation of the linear elasticity until 2011 [14], rather than the biharmonic equation.

To attack the main difficulty, we present two polynomial complexes and reveal several decomposition of polynomial vector and tensors spaces from the complexes. With further help from the Green’s identity and characterization of the trace, we are able to construct two types of finite element spaces on a tetrahedron. Here we present the BDM-type space below. Let K be a tetrahedron and let k≥3 be a positive integer. The shape function space is simply Pk(K;S). The set of edges of K is denoted by E(K), the faces by F(K), and the vertices by V(K). For each edge, we chose two normal vectors n1 and n2. The degrees of freedom are given by

except the moment with

The boundary degree of freedoms (1)-(4) are motivated by the Green’s formulae and the characterization of the trace of H(divdiv,Ω;S). The interior moments of ∇2Pk−2(K) is to determine divdivτ. Together with sym(x×Pk−2(K;T)), the volume moments can determine the polynomial of degree up to k−1.

We then use the vanished trace and the symmetry of the tesnor. Similarly as the RT and BDM elements [2], the vanishing normal-normal trace (34) implies the normal-normal part of τ is zero. To determine the normal-tangential terms, further degrees of freedoms are needed. Due to the symmetry of τ, it is sufficient to provide additional degrees of freedoms on one face, which are inspired by the RT and BDM elements in two dimensions.

It is arduous to figure out the explicit basis functions dual to the degrees of freedom (1)-(6). Hybridization is thus provided for the ease of implementation. The basis functions of the standard Lagrange element can be used to implement the hybridized mixed finite element methods. The constructed divdiv conforming elements are exploited to discretize the mixed formulation of the biharmonic equation. Optimal order and superconvergence error analysis is provided.

The rest of this paper is organized as follows. In Section 2, we present some operations for vectors and tensors. Two polynomial complexes related to the divdiv complex, and direct sum decompositions of polynomial spaces are shown in Section 3. We derive the Green’s identity and characterize the trace of H(divdiv,Ω;S) on polyhedrons in Section 4, and then construct the conforming finite elements for H(divdiv,Ω;S) in three dimensions. Mixed finite element methods for the biharmonic equation are developed in Section 5.

In this section, we shall survey operations for vectors and tensors. Some of them are standard but some are not unified in the literature. In particular, we shall introduce operators appending to the right side of a matrix for operations applied to columns of a matrix. We will mix the usage of row and column vectors which will be clear in the context.

Given a plane F with normal vector n, for a vector v∈R3, we have the orthogonal decomposition

The vector Π⊥Fv:=n×v is also on the plane F and is a rotation of ΠFv by 90∘ counter-clockwise with respect to n. Therefore

We treat Hamilton operator ∇=(∂1,∂2,∂3)⊺ as a column vector and define

For a scalar function v,

are the surface gradient of v and surface curl, respectively. For a vector function v, ∇F⋅v is the surface divergence and by definition

By the cyclic invariance of the mix product, the surface rot operator is

The matrix-vector product Ab can be interpret as the inner product of b with the row vectors of A. We thus define the dot operator

Namely the vector inner product is applied row-wise to the matrix. Similarly we can define the cross product row-wise from the left b×A. Here rigorously speaking when a column vector b is treat as a row vector, b⊺ should be used. In most places, however, we will scarify this precision for the ease of notation.

When the vector is on the right of the matrix, the operation is defined column-wise. That is

By moving the column operation to the right, it is consistent with the transpose operator. For the transpose of product of two objects, we take transpose of each one, switch their order, and add a negative sign if it is the cross product.

For two vectors b,c and matrix A, we define the following products

By moving the column operation to the right, these operations are associative. That is the ordering of performing the products does not matter.

Apply these matrix-vector operations to the Hamilton operator ∇, we get row-wise differentiation

3×3 matrix by K, and all trace-free 3×3 matrix by T. For any matrix B∈M, we can decompose it into symmetric and skew-symmetric part as

For a vector function u=(u1,u2,u3)⊺, curlu=∇×u and divu=∇⋅u are standard differential operations. The gradient ∇u:=u⊗∇=u∇⊺ is a matrix ⎛⎜⎝∇⊺u1∇⊺u2∇⊺u3⎞⎟⎠. Its symmetric part is defined as

In the last identity notation u∇⊺ is used to emphasize the symmetry form. Similarly we can define symcurl operator for a matrix A

We define an isomorphism of R3 and the space of skew-symmetric matrices as follows: for a vector ω=(ω1,ω2,ω3)⊺∈R3,

For two vectors u,v, one can easily verify that

We will use the following identities which can be verified by direct calculation.

More identities involving the matrix operation and vector differentiation are summarized in [1].

In this section, we shall consider the divdiv complex and establish two related polynomial complexes. We assume Ω⊂R3 is a bounded and strong Lipschitz domain which is topologically trivial in the sense that it is homeomorphic to a ball. Without loss of generality, we also assume (0,0,0)∈Ω.

The divdiv complex in three dimensions reads as [1, 13]

For completeness, we prove the exactness of the complex (11) following [13].

Assume Ω is a bounded and topologically trivial strong Lipschitz domain in R3. Then (11) is a complex and exact sequence.

Since divdivτ=0 for any smooth skew-symmetric tensor field τ, we obtain

Hence here exists τ∈H1(Ω;M) such that

By the symmetry of σ, we have σ=symcurlτ. Noting that

which means H(symcurl,Ω;T)∩ker(symcurl)=devgradH1(Ω;R3). Therefore the complex (11) is exact. ∎

Given a bounded domain G⊂R3 and a non-negative integer m, let Pm(G) stand for the set of all polynomials in G with the total degree no more than m, and Pm(G;X) denote the tensor or vector version.

is the identity matrix multiplied by a constant.

The following complex is a generalization of the Koszul complex for vector functions.

Namely πRT is a projector. Consequently, the operator πRT:Pk+1(Ω;R3)→RT is surjective. And we have

Unlike the Koszul complex for vectors functions, we do not have the identity property applied to homogenous polynomials. Fortunately decomposition of polynomial spaces using Koszul and differential operators still holds.

Let Hk(Ω):=Pk(Ω)/Pk−1(Ω) be the space of homogeneous polynomials of degree k. Then by Euler’s formula

for any positive integer ℓ.

We have the decomposition

which indicates p1=p2=p3. Hence it follows from the last identity that x⋅∇p1=0, which combined with (21) gives p1=c for some constant c. Thus q=cx, and devgradq=0. This ends the proof. ∎

Finally we present a decomposition of space Pk(Ω;S). Let

For the simplification of the degree of freedoms, we need another decomposition of the symmetric tensor polynomial space which can be derived from the dual complex of polynomial divdiv complexes.

We first present a Green’s identity based on which we can characterize the trace of H(divdiv,Ω;S) on polyhedrons and give a sufficient continuity condition for a piecewise smooth function to be in H(divdiv,Ω;S). Then we construct the finite element space and prove the unisolvence.

Let {Th}h>0 be a regular family of polyhedral meshes of Ω. Our finite element spaces are constructed for tetrahedrons but some results, e.g., traces and Green’s formulae etc, hold for general polyhedrons. For each element K∈Th, denote by nK the unit outward normal vector to ∂K, which will be abbreviated as n for simplicity. Let Fh, Fih, Eh, Eih, Vh and Vih be the union of all faces, interior faces, all edges, interior edges, vertices and interior vertices of the partition Th, respectively. For any F∈Fh, fix a unit normal vector nF and two unit tangent vectors tF,1 and tF,2, which will be abbreviated as t1 and t2 without causing any confusions. For any e∈Eh, fix a unit tangent vector te and two unit normal vectors ne,1 and ne,2, which will be abbreviated as n1 and n2 without causing any confusions. For K being a polyhedron, denote by F(K), E(K) and V(K) the set of all faces, edges and vertices of K, respectively. For any F∈Fh, let E(F) be the set of all edges of F. And for each e∈E(F), denote by nF,e the unit vector being parallel to F and outward normal to ∂F. Furthermore, set

We start from the Green’s identity for smooth functions on polyhedrons.

We start from the standard integration by parts

Now we rewrite the term

Thus the Green’s identity (26) follows by merging all terms. ∎

When the domain is smooth in the sense that E(K) is an empty set, the term ∑F∈F(K)∑e∈E(F)(n⊺F,eτn,v)e disappears. When v is continuous on edge e, this term will define a jump of the tensor.

4.3. Traces and continuity across the boundary