In this work, semi-discrete and fully-discrete error estimates are derived for the Biot's consolidation model described using a three-field finite element formulation. The fields include displacements, total stress and pressure. The model is implemented using a backward Euler discretization in time for the fully-discrete scheme and validated for benchmark examples. Computational experiments presented verifies the convergence orders for the lowest order finite elements with discontinuous and continuous finite element appropriation for the total stress. 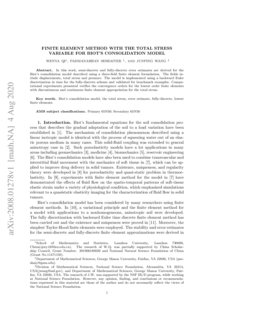 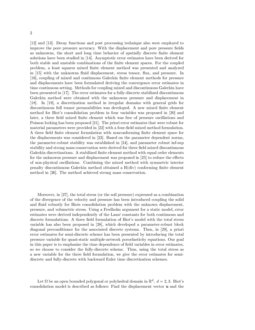 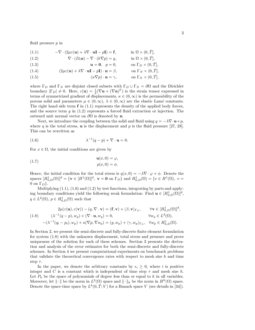 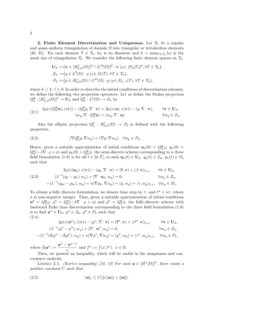 In this paper, we propose a multiphysics finite element method for a non...
Zhihao Ge, et al. ∙

Biot’s fundamental equations for the soil consolidation process that describes the gradual adaptation of the soil to a load variation have been established in [1]. The mechanism of consolidation phenomenon described using a linear isotropic model is identical with the process of squeezing water out of an elastic porous medium in many cases. This solid-fluid coupling was extended to general anisotropy case in [2]. Such poroelasticity models have a lot applications in many areas including geomechanics [3], medicine [4], biomechanics [5], reservoir engineering [6]. The Biot’s consolidation models have also been used to combine transvascular and interstitial fluid movement with the mechanics of soft tissue in [7], which can be applied to improve drug delivery in solid tumors. Existence, uniqueness, and regularity theory were developed in [8] for poroelasticity and quasi-static problem in thermoelasticity. In [9], experiments with finite element method for the model in [7] have demonstrated the effects of fluid flow on the spatio-temporal patterns of soft-tissue elastic strain under a variety of physiological condition, which emphasized simulations relevant to a quasistatic elasticity imaging for the characterization of fluid flow in solid tumors.

with the unknowns fluid displacement, stress tensor, flux, and pressure. In

Moreover, in [27], the total stress (or the soil pressure) expressed as a combination of the divergence of the velocity and pressure has been introduced coupling the solid and fluid robustly for Biot’s consolidation problem with the unknown displacement, pressure, and volumetric stress. Using a Fredholm argument for a static model, error estimates were derived independently of the Lam´e constants for both continuous and discrete formulations. A three field formulation of Biot’s model with the total stress variable has also been proposed in [28], which developed a parameter-robust block diagonal preconditioner for the associated discrete systems. Then, in [29], a priori error estimates for semi-discrete scheme has been presented by introducing the total pressure variable for quasi-static multiple-network poroelasticity equations. Our goal in this paper is to emphasize the time dependence of field variables in error estimates, so we choose to consider the fully-discrete scheme. Thus, using the total stress as a new variable for the three field formulation, we give the error estimates for semi-discrete and fully-discrete with backward Euler time discretization schemes.

Let Ω be an open bounded polygonal or polyhedral domain in Rd, d=2,3

u and the fluid pressure p in

where ΓD and ΓN are disjoint closed subsets with ΓD∪ΓN=∂Ω and the Dirichlet boundary |ΓD|≠0. Here, ε(u)=12(∇u+(∇u)T) is the strain tensor expressed in terms of symmetrized gradient of displacements, κ∈(0,∞) is the permeability of the porous solid and parameters μ∈(0,∞), λ∈(0,∞) are the elastic Lam´e constants. The right hand side term f in (1) represents the density of the applied body forces, and the source term g in (2) represents a forced fluid extraction or injection. The outward unit normal vector on ∂Ω is denoted by n.

Next, we introduce the coupling between the solid and fluid using q=−λ∇⋅u+p, where q is the total stress, u is the displacement and p is the fluid pressure [27, 28]. This can be rewritten as

For x∈Ω, the initial conditions are given by

In Section 2, we present the semi-discrete and fully-discrete finite element formulation for system (8) with the unknown displacement, total stress and pressure and prove uniqueness of the solution for each of these schemes. Section 3 presents the derivation and analysis of the error estimates for both the semi-discrete and fully-discrete schemes. In Section 4 we present computational experiments on benchmark problems that validate the theoretical convergence rates with respect to mesh size h and time step τ.

In the paper, we denote the arbitrary constants by ϵi≥0, where i is positive integer and C is a constant which is independent of time step τ and mesh size h. Let Pk be the space of polynomials of degree less than or equal to k in all variables. Moreover, let ∥⋅∥ be the norm in L2(Ω) space and ∥⋅∥k be the norm in Hk(Ω) space. Denote the space-time space by Lk(0,¯T;V) for a Banach space V (see details in [34]).

Let Th be a regular and quasi-uniform triangulation of domain Ω into triangular or tetrahedron elements [30, 31]. For each element T∈Th, hT is its diameter and h=maxT∈ThhT is the mesh size of triangulation Th. We consider the following finite element spaces on Th,

where k≥2, l≥0. In order to describe the initial conditions of discretization schemes, we define the following two projection operators. Let us define the Stokes projection Quh:[H10,D(Ω)]d→Uh and Qqh:L2(Ω)→Zh by

Also the elliptic projection Qph:H10,D(Ω)→Ph is defined with the following properties,

To obtain a fully-discrete formulation, we denote time step by τ, and tn=nτ, where n is non-negative integer. Thus, given a suitable approximation of initial conditions u0=Quhφ, q0=Qqh(−λ∇⋅φ+ϕ) and p0=Qphϕ, the fully-discrete scheme with backward Euler time discretization corresponding to the three field formulation (8) is to find un∈Uh, qn∈Zh, pn∈Ph such that

Then, we present an inequality, which will be useful in the uniqueness and convergence analysis. (Korn’s inequality) [32, 33] For each u∈[H1(Ω)]d, there exists a positive constant C such that

Next we use Lemma 2 to prove the uniqueness for semi-discrete (11) and fully-discrete (12) schemes. For each t∈(0,¯T], the semi-discrete scheme (11) has a unique solution. We need to prove that the homogeneous problem of (11) has only the trivial solution. Taking the time derivative of the second equation in (11), the homogeneous problem is rewritten as seeking uh∈Uh, qh∈Zh, ph∈Ph with uh(0)=0, qh(0)=0, ph(0)=0 such that

Using the test functions v=uht, wq=qh and wp=ph in (14) and simplifying, we can derive the following identity

Integrating the above identity over (0,t), one finds

Here, we have used the inequality

Summing over n from 1 to N, it follows that

3.1 Error estimate for the semi-discrete scheme

For the semi-discrete scheme, we denote the error in displacement by euh=u−uh=ηuh+ξuh, where ηuh=u−Quhu and ξuh=Quhu−uh. Similarly, we decompose the errors of the total stress and pressure into two parts, respectively, i.e. eqh=ηqh+ξqh and eph=ηph+ξph. Assume that the inf-sup condition (16) is satisfied for the space pair (Uh,Zh). Let (u, q, p) and (uh, qh, ph) be the solutions of (8) and (11) respectively. Then there exists a constant such that for each t∈(0,¯T]

Subtracting (11) from (8), and taking the derivative of the second equation with respect to time t, we get

With the use of the definitions of projections (9) and (10), it follows

Using the Gronwall Lemma [34], one finds

Now, to estimate ∥ξqh∥, we deduce from the first equation of (19), for each v∈Uh

Thus, using the inf-sup condition (16), it follows that

On the other hand, differentiating the first equation of (19) with respect to t, it follows

So we rewrite the above inequality as following

3.2 Error estimate for the fully-discrete scheme