Fine-Pruning: Joint Fine-Tuning and Compression of a Convolutional Network with Bayesian Optimization

When approaching a novel visual recognition problem in a specialized image domain, a common strategy is to start with a pre-trained deep neural network and fine-tune it to the specialized domain. If the target domain covers a smaller visual space than the source domain used for pre-training (e.g. ImageNet), the fine-tuned network is likely to be over-parameterized. However, applying network pruning as a post-processing step to reduce the memory requirements has drawbacks: fine-tuning and pruning are performed independently; pruning parameters are set once and cannot adapt over time; and the highly parameterized nature of state-of-the-art pruning methods make it prohibitive to manually search the pruning parameter space for deep networks, leading to coarse approximations. We propose a principled method for jointly fine-tuning and compressing a pre-trained convolutional network that overcomes these limitations. Experiments on two specialized image domains (remote sensing images and describable textures) demonstrate the validity of the proposed approach. 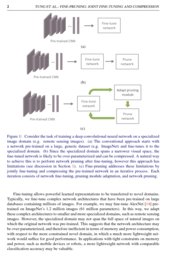 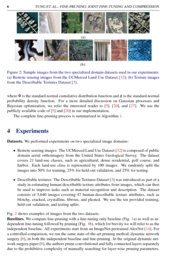 We propose a novel optimization framework that crops a given image based...
Nora Horanyi, et al. ∙

[Kendall et al.(2015)Kendall, Grimes, and Cipolla]. CNNs learn rich image and video representations that have been shown to generalize well across vision tasks.

When faced with a recognition task in a novel domain or application, a common strategy is to start with a CNN pre-trained on a large dataset, such as ImageNet [Russakovsky et al.(2014)Russakovsky, Deng, Su, Krause, Satheesh, Ma, Huang, Karpathy, Khosla, Bernstein, Berg, and Fei-Fei], and fine-tune the network to the new task (Fig. 1a). Fine-tuning involves adapting the structure of the existing network to enable the new task, while re-using the pre-trained weights for the unmodified layers of the network. For example, a common and simple form of fine-tuning involves replacing the final fully-connected layer of the pre-trained CNN, which has an output dimensionality based on the pre-training dataset (e.g. 1000 dimensions for ImageNet), with a new fully-connected layer with a dimensionality that matches the target dataset.

Fine-tuning allows powerful learned representations to be transferred to novel domains. Typically, we fine-tune complex network architectures that have been pre-trained on large databases containing millions of images. For example, we may fine-tune AlexNet [Krizhevsky et al.(2012)Krizhevsky, Sutskever, and Hinton] pre-trained on ImageNet’s 1.2 million images (61 million parameters). In this way, we adapt these complex architectures to smaller and more specialized domains, such as remote sensing images. However, the specialized domain may not span the full space of natural images on which the original network was pre-trained. This suggests that the network architecture may be over-parameterized, and therefore inefficient in terms of memory and power consumption, with respect to the more constrained novel domain, in which a much more lightweight network would suffice for good performance. In applications with tight constraints on memory and power, such as mobile devices or robots, a more lightweight network with comparable classification accuracy may be valuable.

b). However, this strategy has drawbacks: (1) the fine-tuning and pruning operations are performed independently; (2) the pruning parameters are set once and cannot adapt after training has started; and (3) since state-of-the-art pruning methods are highly parameterized, manually searching for good pruning hyperparameters is often prohibitive for deep networks, leading to coarse pruning strategies (e.g. pruning convolutional and fully connected layers separately

We propose a novel process called fine-pruning (Fig. 1c) that addresses these limitations:

Network pruning. Network pruning refers to the process of reducing the number of weights (connections) in a pre-trained neural network. The motivation behind this process is to make neural networks more compact and energy efficient for operation on resource constrained devices such as mobile phones. Network pruning can also improve network generalization by reducing overfitting. The earliest methods [Hassibi and Stork(1992), LeCun et al.(1990)LeCun, Denker, and Solla] prune weights based on the second-order derivatives of the network loss. Data-free parameter pruning [Srinivas and Babu(2015)]

provides a data-independent method for discovering and removing entire neurons from the network. Deep compression

iteratively prunes and splices network weights. The novel splicing operation allows previously pruned weights to be reintroduced. Weights are pruned or spliced based on thresholding their absolute value. All weights, including pruned ones, are updated during backpropagation.

Network pruning is one way to approach neural network compression. Other effective strategies include weight binarization

In this paper, we consider joint fine-tuning and network pruning in the context of transferring the knowledge of a pre-trained network to a smaller and more specialized visual recognition task. Previous approaches for compressing pre-trained neural networks aim to produce a compact network that performs as well as the original network on the dataset on which the network was originally trained. In contrast, our focus is on the fine-tuning or transfer learning problem of producing a compact network for a small, specialized target dataset, given a network pre-trained on a large, generic dataset such as ImageNet. Our approach does not require the source dataset (e.g. ImageNet) on which the original network was trained.

Each fine-pruning iteration comprises three steps: fine-tuning, adaptation of the pruning module, and network pruning (Fig. 1c). Fine-pruning can accommodate any parameterized network pruning module. In our experiments, we use the state-of-the-art dynamic network surgery method [Guo et al.(2016)Guo, Yao, and Chen] for the network pruning module, but fine-pruning does not assume a particular pruning method. Pruning module adaptation is guided by a Bayesian optimization [Gardner et al.(2014)Gardner, Kusner, Xu, Weinberger, and Cunningham, Snoek et al.(2012)Snoek, Larochelle, and Adams] controller, which enables an efficient search of the joint pruning parameter space, learning from the outcomes of previous exploration. This controller allows the pruning behaviour to change over time as connections are removed or formed.

where ℓ is a blackbox objective function that is typically expensive to evaluate, non-convex, may not be expressed in closed form, and may not be easily differentiable [Wang et al.(2013)Wang, Zoghi, Hutter, Matheson, and de Freitas]. Eq. 1 is minimized by constructing a probabilistic model for ℓ to determine the most promising candidate x∗ to evaluate next. Each iteration of Bayesian optimization involves selecting the most promising candidate x∗, evaluating ℓ(x∗), and using the data pair (x∗,ℓ(x∗)) to update the probabilistic model for ℓ.

In our case, x is a set of pruning parameters. For example, if the network pruning module is deep compression [Han et al.(2016b)Han, Mao, and Dally], x consists of the magnitude thresholds used to remove weights; if the network pruning module is dynamic network surgery [Guo et al.(2016)Guo, Yao, and Chen], x consists of magnitude thresholds as well as cooling function hyperparameters that control how often the pruning mask is updated. We define ℓ by

. A Gaussian process is an uncountable set of random variables, any finite subset of which is jointly Gaussian. Let

The implication of the closed form solution is that, given a collection of parameters and the objective function evaluated at those parameters, we can efficiently predict the posterior at unevaluated parameters.

For a Gaussian process, the expected improvement of a candidate can also be efficiently computed in closed form. Specifically,

is the standard normal cumulative distribution function and

is the standard normal probability density function. For a more detailed discussion on Gaussian processes and Bayesian optimization, we refer the interested reader to

The complete fine-pruning process is summarized in Algorithm 1.

Fig. 2 shows examples of images from the two datasets.

Baselines. We compare fine-pruning with a fine-tuning only baseline (Fig. 1a) as well as independent fine-tuning followed by pruning (Fig. 1b), which for brevity we will refer to as the independent baseline. All experiments start from an ImageNet-pretrained AlexNet [Krizhevsky et al.(2012)Krizhevsky, Sutskever, and Hinton]. For a controlled comparison, we run the same state-of-the-art pruning method, dynamic network surgery [Guo et al.(2016)Guo, Yao, and Chen], in both the independent baseline and fine-pruning. In the original dynamic network surgery paper [Guo et al.(2016)Guo, Yao, and Chen], the authors prune convolutional and fully connected layers separately due to the prohibitive complexity of manually searching for layer-wise pruning parameters. To more fairly illustrate the benefit of fine-pruning, we set layer-wise pruning parameters for dynamic network surgery in the independent baseline using Bayesian optimization as well.

Implementation details. We set all parameters by held-out validation on the two datasets. The importance weight λ

is set to 1 on both datasets. We warm-start both the independent baseline and fine-pruning with identical parameters obtained by random search. Fine-pruning is run to convergence or to a maximum of 10 iterations. In each fine-pruning iteration, Bayesian optimization considers up to 50 candidates and network fine-tuning is performed with a fixed learning rate of 0.001 (the same learning policy used to obtain the initial fine-tuned network) to 10 epochs.

Fig. 3 shows how the compression rate varies with the fine-pruning iteration. We observe that, on both datasets, the pruning module adaptation learns to start with a strong initial prune and then gradually increase pruning aggressiveness in later iterations until the network converges. This behavior can also be observed by examining the pruning parameters x∗ selected by Bayesian optimization.

Table 2 illustrates the average number of weights layer by layer after fine-pruning for both datasets. We observe that the original fine-tuned networks in both cases are highly over-parameterized, and a significant reduction in memory can be obtained by fine-pruning. A large proportion of the original network parameters reside in the fully connected layers fc6 and fc7. Provided that the underlying network pruning module allows for pruning parameters to be set on an individual layer basis, our Bayesian optimization controller automatically learns to prioritize the compression of these layers because they have the largest influence on s(x) in the objective function (Eq. 2).

In this paper we have presented a joint process for network fine-tuning and compression that produces a memory-efficient network tailored to a specialized image domain. Our process is guided by a Bayesian optimization controller that allows pruning parameters to adapt over time to the characteristics of the changing network. Fine-pruning is general and can accommodate any parameterized network pruning algorithm. In future we plan to study whether our technique can be applied to provide better time efficiency as well. For example, structured sparsity may result in more significant time savings on a GPU than unstructured sparsity [Wen et al.(2016)Wen, Wu, Wang, Chen, and Li]. Specialized hardware engines [Han et al.(2016a)Han, Liu, Mao, Pu, Pedram, Horowitz, and Dally] can also accelerate networks with unstructured sparsity while reducing energy consumption.

Acknowledgements. This work was supported by the Natural Sciences and Engineering Research Council of Canada.