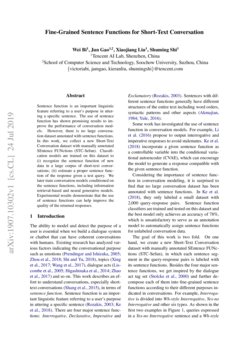 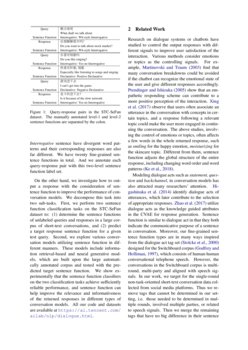 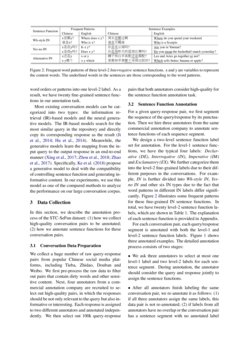 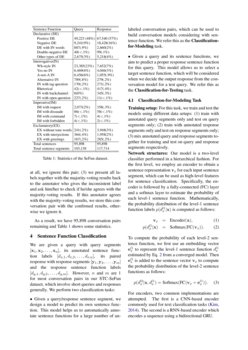 Some work has investigated the use of sentence function in conversation models. For example, Li et al. (2016) propose to output interrogative and imperative responses to avoid stalemates. Ke et al. (2018)

, they only labeled a small dataset with 2,000 query-response pairs. Sentence function classifiers are trained and tested on this dataset and the best model only achieves an accuracy of 78%, which is unsatisfactory to serve as an annotation model to automatically assign sentence functions for unlabeled conversation data.

Research on dialogue systems or chatbots have studied to control the output responses with different signals to improve user satisfaction of the interaction. Various methods consider emotions or topics as the controlling signals. For example, Martinovski and Traum (2003) find that many conversation breakdowns could be avoided if the chatbot can recognize the emotional state of the user and give different responses accordingly. Prendinger and Ishizuka (2005) show that an empathetic responding scheme can contribute to a more positive perception of the interaction. Xing et al. (2017) observe that users often associate an utterance in the conversation with concepts in certain topics, and a response following a relevant topic could make the user more engaged in continuing the conversation. The above studies, involving the control of emotions or topics, often affects a few words in the whole returned response, such as smiling for the happy emotion, moisturizing for the skincare topic. Different from them, sentence function adjusts the global structure of the entire response, including changing word order and word patterns Ke et al. (2018).

Modeling dialogue acts such as statement, question and backchannel, in conversation models has also attracted many researchers’ attention.  Higashinaka et al. (2014) identify dialogue acts of utterances, which later contribute to the selection of appropriate responses. Zhao et al. (2017) utilize dialogue acts as the knowledge guided attributes in the CVAE for response generation. Sentence function is similar to dialogue act in that they both indicate the communicative purpose of a sentence in conversation. Moreover, our fine-grained sentence function types are in many ways inspired from the dialogue act tag set Stolcke et al. (2000) designed for the Switchboard corpus Godfrey and Holliman (1997), which consists of human-human conversational telephone speech. However, the conversations in the Switchboard corpus is multi-round, multi-party and aligned with speech signals. In our work, we target for the single-round non-task-oriented short-text conversation data collected from social media platforms. Thus we remove tags that cannot be determined in our setting, i.e. those needed to be determined in multiple rounds, involved multiple parties, or related to speech signals. Then we merge the remaining tags that have no big difference in their sentence word orders or patterns into one level-2 label. As a result, we have twenty fine-grained sentence functions in our annotation task.

Most existing conversation models can be categorized into two types: the information retrieval (IR)-based models and the neural generative models. The IR-based models search for the most similar query in the repository and directly copy its corresponding response as the result Ji et al. (2014); Hu et al. (2014). Meanwhile, the generative models learn the mapping from the input query to the output response in an end-to-end manner Xing et al. (2017); Zhou et al. (2018); Zhao et al. (2017). Specifically, Ke et al. (2018) propose a generative model to deal with the compatibility of controlling sentence function and generating informative content. In our experiments, we use this model as one of the compared methods to analyze the performance on our large conversation corpus.

We collect a huge number of raw query-response pairs from popular Chinese social media platforms, including Tieba, Zhidao, Douban and Weibo. We first pre-process the raw data to filter out pairs that contain dirty words and other sensitive content. Next, four annotators from a commercial annotation company are recruited to select out high-quality pairs, in which the responses should be not only relevant to the query but also informative or interesting. Each response is assigned to two different annotators and annotated independently. We then select out 100k query-response pairs that both annotators consider high-quality for the sentence function annotation task.

For a given query-response pair, we first segment the sequence of the query/response by its punctuation. Then we hire three annotators from the same commercial annotation company to annotate sentence functions of each sequence segment.

For each conversation pair, each query/response segment is annotated with both the level-1 and level-2 sentence function labels. Figure 1 shows three annotated examples. The detailed annotation process consists of two stages:

As a result, we have 95,898 conversation pairs remaining and Table 1 shows some statistics.

Network structures: Our model is a two-level classifier performed in a hierarchical fashion. For the first level, we employ an encoder to obtain a sentence representation vx

p(dl1x|x) is computed as follows:

To compute the probability of each level-2 sentence function, we first use an embedding vector

For encoders, two common implementations are attempted. The first is a CNN-based encoder commonly used for text classification tasks Kim (2014). The second is a RNN-based encoder which encodes a sequence using a bidirectional GRU.

The dimension of all hidden vectors is 1024. All parameters are initialized by sampling from a uniform distribution

Constructing the STC-Auto-SeFun dataset: The classification results are shown and analyzed in Section 6.2. Based on the obtained results, we conclude that the estimated sentence functions by our trained models are highly reliable. Thus we apply the best model to automatically annotating the sentence functions for queries and responses on a large unlabeled data corpus, which contains over 700 million conversation pairs crawled using similar steps in Section 3.1. This dataset, namely the STC-Auto-SeFun dataset, is later used to build conversation models discussed in Section 5.

We adopt a simple IR model by first finding the most similar query in the retrieval corpus, then utilizing its response as the result. Similarity is measured by the Jaccard index between two bags of words.

The re-ranking score is then computed as:

and the candidate responses are sorted according to their sre−ranki’s. Here, hyper-parameters λ and k are used to control sentence function’s influence in re-ranking. If the top candidate has a penalty weight of 1.0, then with λ=1, it will be moved to the k’th position in the ranking list. Whereas, λ=0 corresponds to no re-ranking.

Seq2seq baseline: We use a one-layer bi-directional GRU for the encoder, and a one-layer GRU for the decoder with soft attention mechanism Bahdanau et al. (2015). Beam search is applied in testing.

C-Seq2seq Ficler and Goldberg (2017): We modify the Seq2seq baseline by adding the sentence function embedding as another input at each decoding position.

KgCVAE Zhao et al. (2017): The basic CVAE introduces a latent variable z to capture the latent distribution over valid responses and optimizes the variational lower bound of the conditional distribution p(y,z|x). To further incorporate the knowledge-guided features l, the KgCVAE assumes that the generation of y depends on z, x and l, and l relies on x and z. The variational lower bound is then revised to consider l jointly. Here, we use the response sentence function dy of each conversation pair as the knowledge-guided features.

SeFun-CVAE Ke et al. (2018): This model is specifically designed to deal with the compatibility of the response sentence function dy and informative content in generation. It optimizes the variational lower bound of p(y,z|x,dy), where z is a latent variable assumed to be able to capture the sentence function of y. Thus a discriminator is added to constrain that the encoding information from z can well realize its corresponding sentence function dy. The decoder is also revised to generate words among three types: function-related, topic and ordinary words.

For the re-ranked IR-based model, we collect the top-20 candidates for re-ranking. We set λ=1 and k=20. For all generative models, we use a vocabulary of 50,000 words (a mixture of Chinese words and characters), which covers 99.98% of words in the STC-Auto-SeFun dataset. All other words are replaced with <UNK>. The network parameter setting is identical to the classification task. During testing, we use beam search with a beam size of 5.

Based on the above analysis, we consider the RNN-encoder(joint) as the best model for this task, and apply it for the construction of the STC-Auto-SeFun dataset and the conversation models.

Note that in previous work about estimating the next dialogue act from a 33 dialogue act tag set given the context with its dialogue acts  Higashinaka et al. (2014), the models achieve about 28% on Accuracy. Comparing with them, we consider our model has sufficient ability to choose a reasonable target response sentence function for a given test query. Here, we choose to use the RNN-encoder (with query SeFun) in the testing of the conversation models discussed in the next section.

Since automatic metrics for open-domain conversations may not be consistent with human perceptions Liu et al. (2016), we hire three annotators from a commercial annotation company to evaluate the top-1 responses on 200 sampled test queries in four aspects: Fluency (whether a response is grammatical), Relevance (whether a response is a relevant reply to its query), Informativeness (whether the response provides meaningful information via some specific words relevant to the query) and Accuracy (whether the response is coherent with the target sentence function). Each aspect is graded independently in five grades from 0 (totally unacceptable) to 5 (excellent). We further normalize the average scores over all samples into [0,1].

Results are shown in Table 5. We can make the following observations:

Results are shown in Table 6. We have the following observations:

In Figure 3, we present two examples, each of which shows a test query with its target level-2 response sentence function (predicted by the Classification-for-Testing model), and the top-1 responses selected by the IR-based models.

We can see that the IR baseline tends to output responses with more overlapped terms with the query due to the use of Jaccard similarity. However, the obtained responses may not be relevant to the query, as shown in the first case. Whereas, the re-ranked IR model can balance between the compatibility of the target response sentence function and the Jaccard similarity. Thus its selected responses may not have many term overlapped with the query, but the conversations continue more smoothly and coherently.

Responses of the Seq2seq baseline are generic and universal that can be used to reply to a large variety of queries. The three improved methods tend to generate responses with some words related to the target sentence functions and relevant to the query. Thus generative models with the use of sentence function can help improve the response quality, though not as significantly as in the IR-based models.