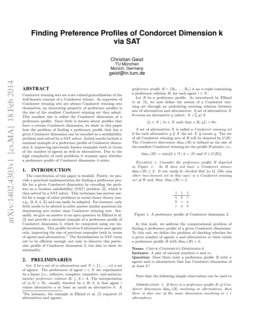 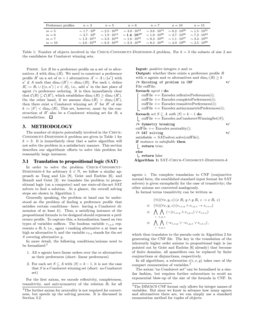 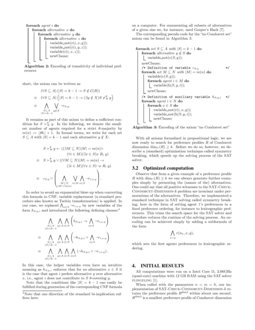 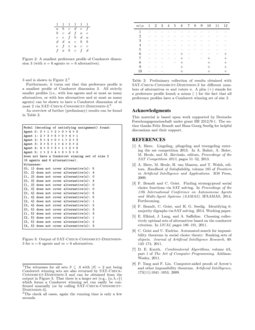 The contribution of this paper is twofold. Firstly, we provide a practical implementation for finding a preference profile for a given Condorcet dimension by encoding the problem as a boolean satisfiability (SAT) problem [Biere et al., 2009], which is then solved by a SAT solver. This technique has proven useful for a range of other problems in social choice theory [Tang and Lin, 2009, Geist and Endriss, 2011, Brandt et al., 2014, Brandt and Geist, 2014, see, ] and can easily be adapted. For instance, only little needs to be altered in order answer similar questions for dominating sets rather than Condorcet winning sets. Secondly, we give an answer to an open question by Elkind et al. [2011] and provide a minimal example of a preference profile of Condorcet dimension 3, which we computed using our implementation. This profile involves 6 alternatives and agents only, improving the size of previous examples both in terms of agents and alternatives.111For instance, the example in Elkind et al. [2011] required 15 alternatives and agents. The formalization in SAT turns out to be efficient enough, not only to discover this particular profile of Condorcet dimension 3, but also to show its minimality.

Let R be a preference profile. As introduced by Elkind et al. [2011], we now define the notion of a Condorcet winning set through an underlying covering relation between sets of alternatives and alternatives: A set of alternatives X θ-covers an alternative y (short: X≻θRy) if

Consider the preference profile R depicted in fig:example. As R does not have a Condorcet winner dimC(R)≥2. It can easily be checked that {a,b} (like any other two-element set in this case) is a Condorcet winning set of R and, thus, dimC(R)=2.

Name: Check-Condorcet-Dimension-k Instance: A pair of natural numbers n and m. Question: Does there exist a preference profile R with n agents and m alternatives that has Condorcet dimension of at least k?

Note that the following simple observation can be used to

Let R be a preference profile on a set of m alternatives A with dimC(R). We need to construct a preference profile R′ on a set of m+1 alternatives A′=A∪{a′} with a′∉A such that dimC(R′)=dimC(R). For each i, define R′i:=Ri∪{(x,a′)∣x∈A}, add a′ in the last place of agent i’s preference ordering. It is then immediately clear that C(R)⊆C(R′), which establishes dimC(R)≥dimC(R′). On the other hand, if we assume dimC(R)>dimC(R′), then there exist a Condorcet winning set S′ for R′ of size k:=|S′|<dimC(R). This set, however, must–by the construction of R′–also be a Condorcet winning set for R; a contradiction. ∎

The number of objects potentially involved in the Check-Condorcet-Dimension-k problem are given in tab:magnitudes for k=3. It is immediately clear that a naïve algorithm will not solve the problem in a satisfactory manner. This section describes our algorithmic efforts to solve this problem for reasonably large instances.

In order to solve the problem Check-Condorcet-Dimension-k for arbitrary k∈N, we follow a similar approach as Tang and Lin [2009], Geist and Endriss [2011], and Brandt and Geist [2014]: we translate the problem to propositional logic (on a computer) and use state-of-the-art SAT solvers to find a solution. At a glance, the overall solving steps are shown in alg:SATcheck.

Generally speaking, the problem at hand can be understood as the problem of finding a preference profile that satisfies certain conditions—here: having a Condorcet dimension of at least k). Thus, a satisfying instance of the propositional formula to be designed should represent a preference profile. To capture this, a formalization based on two types of variables suffices. The boolean variable ri,a,b represents aRib, agent i ranking alternative a at least as high as alternative b; and the variable cS,y stands for the set S covering alternative y.

In more detail, the following conditions/axioms need to be formalized:222The further axiom for neutrality is not required for correctness, but speeds up the solving process. It is discussed in subsec:opt.

For the first axiom, we encode reflexivity, completeness, transitivity, and anti-symmetry of the relation Ri for all agents i. The complete translation to CNF (conjunctive normal form, the established standard input format for SAT solvers) is given exemplarily for the case of transitivity; the other axioms are converted analogously.

which then translates to the pseudo code in alg:transitivity for generating the CNF file. The key in the translation of the inherently higher order axioms to propositional logic is (as pointed out by Geist and Endriss [2011] already) that because of finite domains, all quantifiers can be replaced by finite conjunctions or disjunctions, respectively.

In all algorithms, a subroutine r(i,x,y) takes care of the compact enumeration of variables.333The DIMACS CNF format only allows for integer names of variables. But since we know in advance how many agents and alternatives there are, we can simply use a standard enumeration method for tuples of objects.

The axiom “no Condorcet set” can be formalized in a similar fashion, but requires further subroutines to avoid an exponential blow-up of the size of the formula in CNF. In short, the axiom can be written as

It remains as part of this axiom to define a sufficient condition for S≻θRy. In the following, we denote the smallest number of agents required for a strict θ-majority by m(n):=⌊θk⌋+1. In formal terms, we write for each set S⊆A with |S|=k−1 and each alternative y∉X:

In order to avoid an exponential blow-up when converting this formula to CNF, variable replacement (a standard procedure also known as Tseitin transformation) is applied. In our case, we replaced ⋀x∈S¬ri,x,y by new variables of the form hS,y,i and introduced the following defining clauses:444Note that one direction of the standard bi-implication suffices here.

In this case, the helper variables even have an intuitive meaning as hS,y,i enforces that for no alternative x∈S it is the case that agent i prefers alternative y over alternative x, agent i does not contribute to S θ-covering y.

Note that the conditions like |S|=k−1 can easily be fulfilled during generation of the corresponding CNF formula on a computer. For enumerating all subsets of alternatives of a given size we, for instance, used Gosper’s Hack [Knuth, 2011].

The corresponding pseudo code for the “no Condorcet set” axiom can be found in alg:noCondSet.

With all axioms formalized in propositional logic, we are now ready to search for preference profiles R of Condorcet dimension dimC(R)≥k. Before we do so, however, we describe a (standard) optimization technique called symmetry breaking, which speeds up the solving process of the SAT solver.

Observe that from a given example of a preference profile R with dimC(R)≥k we can always generate further examples simply by permuting the (names of the) alternatives. One could say that all positive witnesses to the SAT-Check-Condorcet-Dimension-k problem are invariant under permutations of the alternatives. Therefore, we implemented a standard technique in SAT solving called symmetry breaking; here in the form of setting agent 1’s preferences to a fixed preference ordering, for instance to lexicographic preferences. This trims the search space for the SAT solver and therefore reduces the runtime of the solving process. An encoding can be achieved simply by adding a subformula of the form

which sets the first agents preferences to lexicographic ordering.

Furthermore, it turns out that this preference profile is a smallest profile of Condorcet dimension 3. All strictly smaller profiles (with less agents and at most as many alternatives, or with less alternatives and at most as many agents) can be shown to have a Condorcet dimension of at most 2 via SAT-Check-Condorcet-Dimension-3.666The check all cases, again the running time is only a few seconds.

An overview of further (preliminary) results can be found in tab:complete.

This material is based upon work supported by Deutsche Forschungsgemeinschaft under grant BR 2312/9-1. The author thanks Felix Brandt and Hans Georg Seedig for helpful discussions and their support.