Popular matchings have been intensively studied recently as a relaxed concept of stable matchings. By applying the concept of popular matchings to branchings in directed graphs, Kavitha et al. (2020) introduced popular branchings. In a directed graph G=(V_G,E_G), each vertex has preferences over its incoming edges. For branchings B_1 and B_2 in G, a vertex v∈ V_G prefers B_1 to B_2 if v prefers its incoming edge of B_1 to that of B_2, where having an arbitrary incoming edge is preferred to having none, and B_1 is more popular than B_2 if the number of vertices that prefer B_1 is greater than the number of vertices that prefer B_2. A branching B is called a popular branching if there is no branching more popular than B. Kavitha et al. (2020) proposed an algorithm for finding a popular branching when the preferences of each vertex are given by a strict partial order. The validity of this algorithm is proved by utilizing classical theorems on the duality of weighted arborescences. In this paper, we generalize popular branchings to weighted popular branchings in vertex-weighted directed graphs in the same manner as weighted popular matchings by Mestre (2014). We give an algorithm for finding a weighted popular branching, which extends the algorithm of Kavitha et al., when the preferences of each vertex are given by a total preorder and the weights satisfy certain conditions. Our algorithm includes elaborated procedures resulting from the vertex-weights, and its validity is proved by extending the argument of the duality of weighted arborescences. 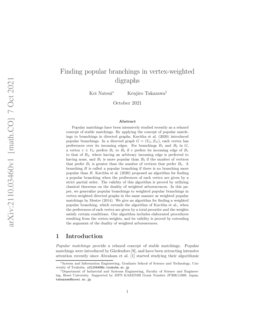 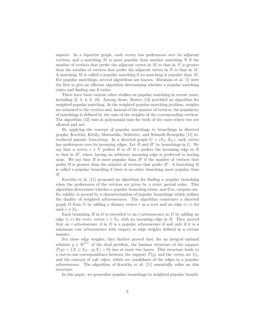 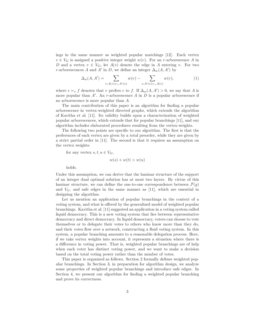 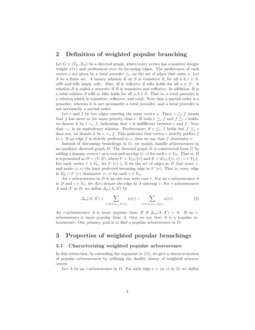 By applying the concept of popular matchings to branchings in directed graphs, Kavitha, Király, Matuschke, Schlotter, and Schmidt-Kraepelin [11] introduced popular branchings. In a directed graph G=(VG,EG), each vertex has preferences over its incoming edges. Let B and B′ be branchings in G. We say that a vertex v∈V prefers B to B′ if v prefers the incoming edge in B to that in B′, where having an arbitrary incoming edge is preferred to having none. We say that B is more popular than B′ if the number of vertices that prefer B is greater than the number of vertices that prefer B′. A branching B is called a popular branching if there is no other branching more popular than B.

Kavitha et al. [11] proposed an algorithm for finding a popular branching when the preferences of the vertices are given by a strict partial order. This algorithm determines whether a popular branching exists, and if so, outputs one. Its validity is proved by a characterization of popular branchings which utilizes the duality of weighted arborescences. The algorithm constructs a directed graph D from G by adding a dummy vertex r as a root and an edge (r,v) for each v∈VG.

For these edge weights, they further proved that, for an integral optimal solution y∈R2VG of the dual problem, the laminar structure of the support F(y)={X⊆VG:y(X)>0} has at most two layers. This structure leads to a one-to-one correspondence between the support F(y) and the vertex set VG, and the concept of safe edges, which are candidates of the edges in a popular arborescence. The algorithm of Kavitha et al. [11] essentially relies on this structure.

In this paper, we generalize popular branchings to weighted popular branchings in the same manner as weighted popular matchings [12]. Each vertex v∈VG is assigned a positive integer weight w(v). For an r-arborescence A in D and a vertex v∈VG, let A(v) denote the edge in A entering v. For two r-arborescences A and A′ in D, we define an integer Δw(A,A′) by

The following two points are specific to our algorithm. The first is that the preferences of each vertex are given by a total preorder, while they are given by a strict partial order in [11]. The second is that it requires an assumption on the vertex weights:

Under this assumption, we can derive that the laminar structure of the support of an integer dual optimal solution has at most two layers. By virtue of this laminar structure, we can define the one-to-one correspondence between F(y) and VG, and safe edges in the same manner as [11], which are essential in designing the algorithm.

Let us mention an application of popular branchings in the context of a voting system, and what is offered by the generalized model of weighted popular branchings. Kavitha et al. [11] suggested an application in a voting system called liquid democracy. This is a new voting system that lies between representative democracy and direct democracy. In liquid democracy, voters can choose to vote themselves or to delegate their votes to others who know more than they do, and their votes flow over a network, constructing a fluid voting system. In this system, a popular branching amounts to a reasonable delegation process. Here, if we take vertex weights into account, it represents a situation where there is a difference in voting power. That is, weighted popular branchings are of help when each voter has distinct voting power, and we want to make a decision based on the total voting power rather than the number of votes.

Let e and f be two edges entering the same vertex v. Then, e≾vf means that f has more or the same priority than e. If both e≾vf and f≾ve holds, we denote it by e∼vf, indicating that v is indifferent between e and f. Note that ∼v is an equivalence relation. Furthermore, if e≾vf holds but f≾ve does not, we denote it by e≺vf. This indicates that vertex v strictly prefers f to e. If an edge f is strictly preferred to e, then we say that f dominates e.

Instead of discussing branchings in G, we mainly handle arborescences in an auxiliary directed graph D. The directed graph D is constructed from G by adding a dummy vertex r as a root and an edge (r,v) for each v∈VG. That is, D is represented as D=(V,E), where V=VG∪{r} and E=EG∪{(r,v):v∈VG}. For each vertex v∈VG, let δ−(v)⊆E be the set of edges in D that enter v, and make (r,v) the least preferred incoming edge in δ−(v). That is, every edge in EG∩δ−(v) dominates (r,v) for each v∈VG.

In this subsection, by extending the argument in [11], we give a characterization of popular arborescences by utilizing the duality theory of weighted arborescences.

Let A be an r-arborescence in D. For each edge e=(u,v) in D, we define the cost cA(e) as follows:

We thus obtain the following proposition.

, consider the following linear program (LP1), which describes the min-cost

r-arborescence problem, and its dual (LP2). For any non-empty set X⊆VG, let δ−(X)⊆E be the set of edges in D that enter X.

The following proposition is a direct consequence of the definition of the costs cA.

For an r-arborescence A and a feasible solution y to (LP2), we have that

For every vertex v∈VG, it holds that

From now on, we deal with an optimal solution y with certain properties. The first property is described in the following lemma.

If the costs cA are integers, there exists an integral optimal solution y∗ to (LP2) such that F(y∗) is laminar.

Since the costs cA(e)∈{0,w(v),2w(v)} are integers, it follows from Lemma 3 that there exists an integral optimal solution y∗A to (LP2) such that F(y∗A) is laminar. Furthermore, the following proposition can be derived by the duality of weighted arborescences, as described in [11].

For an r-arborescence A, the following statements are equivalent.

Let A⊆E be an r-arborescence and y∗A be an optimal solution for (LP2). Let E∘ be the set of edges e∈E satisfying ∑X:e∈δ−(X)y∗A(X)=cA(e) and let D∘=(V,E∘). The following lemma applies to general weighted arborescences. For a directed graph D′=(V′,E′) and its vertex subset X⊆V′, we denote the subgraph induced by X is denoted by D′[X]=(X,E′[X]). Similarly, for an edge subset A′⊆E′, the set of edges in A′ induced by X is denoted by A′[X].

Let y∗A be an optimal integral solution to (LP2) whose support is laminar. Among those, choose y∗A such that ∑Y∈F(y∗A)|Y|⋅y∗A(Y) is minimal. Assume to the contrary that D∘[Y] is not strongly connected for some Y∈F(y∗A). Then there exists a strongly connected component Z of D∘[Y] such that δ−(Z)∩E∘[Y]=∅, that is, for all edges e in δ−(Z), ∑X:e∈δ−(X)y(X)<cA(e) holds. Define y′∈R2VG∖{∅} by

In what follows, we denote by y∗A the integer optimal solution to (LP2) described in Lemma 5. If A is a popular arborescence, we can impose a stronger condition on y∗A.

For a popular arborescence A, there exist an integral optimal solution y∗A to (LP2) such that F(y∗A) is laminar, D∘[Y] is strongly connected for every Y∈F(y∗A), and the following is satisfied.

For a popular arborescence, the following lemma holds.

From Lemma 6 and 7, the next proposition follows.

Let A be a popular arborescence. Then, there exists a one-to-one correspondence between the sets in F(y∗A) satisfying (12) and the vertices in VG. Moreover, for each X∈F(y∗A) and the terminal vertex v of the edge (u,v)∈A∩δ−(X), we have y∗A(X)=w(v).

Denote by Yv the unique set in F(y∗A) that is in correspondence with v in the sense of Proposition 8. Note that F(y∗A)={Yv:v∈VG} and the unique edge in A entering Yv is A(v). We thus refer to v as the entry-point of Yv.

In Kavitha et al.’s algorithm for finding popular branching [11], the laminar structure of F(y∗A) has at most two layers:

This structure plays an important role in the algorithm: it leads to a one-to-one correspondence between F(y∗A) and the vertex set VG, and the concept of safe edges.

In the unweighted case, (14) follows from Proposition 2. However, when the weights w(v) can be more than one, Proposition 2 alone does not rule out the case where |{X∈F(y∗A)∣v∈X}|≥3. In order to maintain (14), as mentioned in Section 1, we impose an assumption on the vertex weights. Recall that the assumption is:

From this assumption, we can derive the following proposition.

From Proposition 8 and 9, and the laminarity of F(y∗A), the following corollary can be derived.

The safe edges used in our algorithm are defined in the same way as [11], described below. For X⊆VG, an edge (u,v)∈E[X] satisfying the following two conditions is called a safe edge in X, and the set of safe edges in X is denoted by S(X).

The edges in a popular arborescence are basically chosen from safe edges, as shown in the next proposition.

For any popular arborescence A and X∈F(y∗A) satisfying (12), it holds that A∩E[X]⊆S(X).

We are now ready to describe our algorithm for finding a weighted popular arborescence and prove its validity. The algorithm is described as follows.

A major difference from the algorithm without the vertex-weights [11] appears in STEP 3. If the condition shown in STEP 3 is satisfied, there exists no popular arborescence (see Lemma 18).

The following lemma in [11] is useful in our proof as well.

For each v∈VG, let Xv be the set defined in the algorithm STEP 1. Then, X is laminar, and u∈Xv implies Xu⊆Xv.

If the algorithm returns an edge set A∗, then A∗ is a popular arborescence.

First, we can show that A∗ is an r-arborescence in D in the same manner as [11].

Next, we show that A∗ is a popular arborescence. For X∈X′ such that |X|≥2, let vX∈R be the terminal vertex of the edge in A∗∩δ−(X). Let YvX⊆X be a strongly connected component of the subgraph induced by S(X)∪{e∈δ−(vX):e≻vXA∗(vX)} that contains vX. For a vertex t∈VG such that t∈X∖{vX} for some X∈X with |X|≥2 or {t}∈X′, let Yt={t}. Here, based on Proposition 8, we define

It is clear that ∑Y⊆VGy(Y)=w(VG). By Proposition 4, the proof completes by showing that y is a feasible solution to (LP2) determined by A∗.