Let G=(V,E) be a finite undirected graph. An edge set E' ⊆ E is a dominating induced matching ( d.i.m.) in G if every edge in E is intersected by exactly one edge of E'. The Dominating Induced Matching (DIM) problem asks for the existence of a d.i.m. in G; this problem is also known as the Efficient Edge Domination problem; it is the Efficient Domination problem for line graphs. The DIM problem is -complete even for very restricted graph classes such as planar bipartite graphs with maximum degree 3 but is solvable in linear time for P_7-free graphs, and in polynomial time for S_1,2,4-free graphs as well as for S_2,2,2-free graphs and for S_2,2,3-free graphs. In this paper, combining two distinct approaches, we solve it in polynomial time for P_9-free graphs. 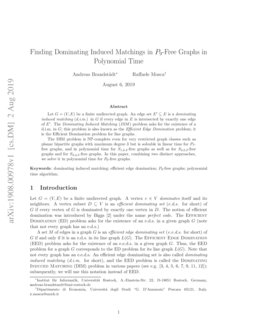 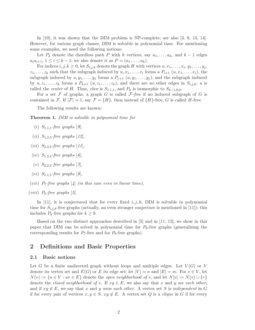 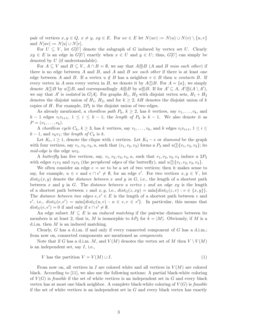 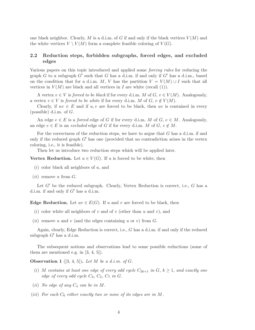 Let G=(V,E) be a finite undirected graph. A vertex v∈V dominates itself and its neighbors. A vertex subset D⊆V is an efficient dominating set (e.d.s. for short) of G if every vertex of G is dominated by exactly one vertex in D. The notion of efficient domination was introduced by Biggs [2] under the name perfect code. The Efficient Domination (ED) problem asks for the existence of an e.d.s. in a given graph G (note that not every graph has an e.d.s.)

A set M of edges in a graph G is an efficient edge dominating set (e.e.d.s. for short) of G if and only if it is an e.d.s. in its line graph L(G). The Efficient Edge Domination (EED) problem asks for the existence of an e.e.d.s. in a given graph G. Thus, the EED problem for a graph G corresponds to the ED problem for its line graph L(G). Note that not every graph has an e.e.d.s. An efficient edge dominating set is also called dominating induced matching (d.i.m. for short), and the EED problem is called the Dominating Induced Matching (DIM) problem in various papers (see e.g. [3, 4, 5, 6, 7, 9, 11, 12]); subsequently, we will use this notation instead of EED.

In [10], it was shown that the DIM problem is NP-complete; see also [3, 9, 13, 14]. However, for various graph classes, DIM is solvable in polynomial time. For mentioning some examples, we need the following notions:

The following results are known:

DIM is solvable in polynomial time for

In [11], it is conjectured that for every fixed i,j,k, DIM is solvable in polynomial time for Si,j,k-free graphs (actually, an even stronger conjecture is mentioned in [11]); this includes Pk-free graphs for k≥9.

Based on the two distinct approaches described in [5] and in [11, 12], we show in this paper that DIM can be solved in polynomial time for P9-free graphs (generalizing the corresponding results for P7-free and for P8-free graphs).

For U⊆V, let G[U] denote the subgraph of G induced by vertex set U. Clearly xy∈E is an edge in G[U] exactly when x∈U and y∈U; thus, G[U] can simply be denoted by U (if understandable).

Various papers on this topic introduced and applied some forcing rules for reducing the graph G to a subgraph G′ such that G has a d.i.m. if and only if G′ has a d.i.m., based on the condition that for a d.i.m. M, V has the partition V=V(M)∪I such that all vertices in V(M) are black and all vertices in I are white (recall (1)).

Clearly, if uv∈E and if u,v are forced to be black, then uv is contained in every (possible) d.i.m. of G.

For the correctness of the reduction steps, we have to argue that G has a d.i.m. if and only if the reduced graph G′ has one (provided that no contradiction arises in the vertex coloring, i.e., it is feasible).

Then let us introduce two reduction steps which will be applied later.

Vertex Reduction. Let u∈V(G). If u is forced to be white, then

Edge Reduction. Let uv∈E(G). If u and v are forced to be black, then

Again, clearly, Edge Reduction is correct, i.e., G has a d.i.m. if and only if the reduced subgraph G′ has a d.i.m.

The subsequent notions and observations lead to some possible reductions (some of them are mentioned e.g. in [3, 4, 5]).

Since by Observation 1 (i), every triangle contains exactly one M-edge, and the pairwise distance of M-edges is at least 2, we have:

Clearly, it can be checked (directly) in polynomial time whether the input graph is K4-free.

By Observation 1 (i) with respect to C3 and the distance property, we have the following:

The mid-edge of any diamond in G and the two peripheral edges of any induced butterfly are forced edges of G.

Assumption 2. From now on, by Observation 2, we assume that the input graph is (diamond,butterfly)-free.

Based on [5], we first describe some general structure properties for the distance levels of an edge in a d.i.m. M of G. Since G is (K4, diamond, butterfly)-free, we have:

For every vertex v of G, N(v) is the disjoint union of isolated vertices and at most one edge. Moreover, for every edge xy∈E, there is at most one common neighbor of x and y.

Since it is trivial to check whether G has a d.i.m. M with exactly one edge, from now on we can assume that |M|≥2. Since G is connected and butterfly-free, we have:

Recall [5] for Observation 4. Let xy∈M be an M-edge for which there is a vertex r such that {r,x,y} induce a P3 with edge rx∈E. By the assumption that xy∈M, we have that x and y are black, and it could lead to a feasible xy-coloring (if no contradiction arises).

denote the distance levels of xy. We consider a partition of V into Ni=Ni(xy), i≥0, with respect to the edge xy (under the assumption that xy∈M). Clearly, by Observation 4 and since G is P9-free, we have:

Moreover, no edge between N1 and N2 is in M. Since N1⊆I and all neighbors of vertices in I are in V(M), we have:

As a consequence of (7) and the fact that every triangle contains exactly one M-edge (recall Observation 1 (i)), we have:

This means that for the edge bc, the Edge Reduction can be applied, and from now on, we can assume that there is no such triangle abc with a∈N3 and b,c∈N4, i.e., for every edge uv∈E in N4:

Proof. (i): Holds by definition of Ti and by the distance condition of a d.i.m. M.

(iii): Follows by Observation 1 (i) since every odd cycle in G must contain at least one M-edge, and by (7).

By Lemma 1 (iv) and the Vertex Reduction for the white vertices of S3, we can assume:

For finding a d.i.m. M with xy∈M, one can remove all but one in-vertices; that can be done in polynomial time. In particular, if there is an edge between two in-vertices t1t2∈E, t1,t2∈Ti, then either t1 or t2 is black, and thus, Ti is completely colored. Thus, let us assume:

Recall that |Ti|≥2. If there is an edge in Ti, say ab∈E with a,b∈Ti and there is a third vertex c∈Ti then either a or b is black, and thus c is forced to be white, and by the Vertex Reduction and by Lemma 2 (ii), we can assume:

Then let us introduce the following forcing rules (which are correct). Since no edge in N3 is in M (recall (7)), we have:

Subsequently, for checking if G has a d.i.m. M with xy∈M, we consider the cases N4=∅ and N4≠∅. In particular, we have the following property:

Recall that the distance distG(a,b) between two vertices a,b in graph G, is the number of edges in a shortest path in G between a and b.

We call such a vertex v a central vertex. Theorem 2 implies that every connected P9-free graph G admits a vertex v∈V such that distG(v,u)≤4 for every u∈V. Then let G be a connected P9-free graph and let v∈V be a central vertex such that distG(u,v)≤4 for every u∈V. Clearly, for every edge uv∈E, Nk(uv)=∅ for any k≥5. Moreover, since G is (K4,diamond,butterfly)-free (and G is no triangle, else the DIM problem is trivial), uv is contained in an induced P3 of G.

If one could check, for any edge uv∈E, whether there is a d.i.m. M′ of G with uv∈M, then one could conclude: Either G has a d.i.m. with v∈V(M), or G has no d.i.m. M with v∈V(M); in particular, in the latter case, if none of the edges uv is in a d.i.m. then v is white and one can apply the Vertex Reduction to v and in particular remove v.

Then let us introduce the following recursive algorithm which formalizes the approach we will adopt to check if G has a d.i.m.

Then, by the above, Algorithm DIM(G) is correct and can be executed in polynomial time as soon as Step (B.2) can be so.

Then in what follows let us try to show that Step (B.2) can be solved in polynomial time, with the agreement that G is (K4,diamond,butterfly)-free and enjoys assumptions (A1)-(A6): in particular recall that Nk=∅ for k≥5.

Clearly, in the case N4=∅, all the components of G[S2∪N3] can be independently colored. Every component with at most three S2-vertices has a polynomial number of feasible xy-colorings. Thus, we can focus on components K with at least four S2-vertices.

If every P2 in component K in G[S2∪N3] is isolated then K has at most three S2-vertices.

From now on, we can assume that there is at least one P3 with contact between Ti and Ti+1 in K.

Proof. Suppose to the contrary that (a,b,c,d,e) is a P5 in G[N3] with special P5-endpoint a∈Ti and b,c,d,e∉Ti. But then by Observation 5, vertex a is the midpoint of a P9, which is a contradiction. Thus, Claim 3 is shown. ∎