Cheeger's inequality states that a tightly connected subset can be extracted from a graph G using an eigenvector of the normalized Laplacian associated with G. More specifically, we can compute a subset with conductance O(√(phi_G)), where ϕ_G is the minimum conductance of a set in G. It has recently been shown that Cheeger's inequality can be extended to hypergraphs. However, as the normalized Laplacian of a hypergraph is no longer a matrix, we can only approximate to its eigenvectors; this causes a loss in the conductance of the obtained subset. To address this problem, we here consider the heat equation on hypergraphs, which is a differential equation exploiting the normalized Laplacian. We show that the heat equation has a unique solution and that we can extract a subset with conductance √(phi_G) from the solution. An analogous result also holds for directed graphs. 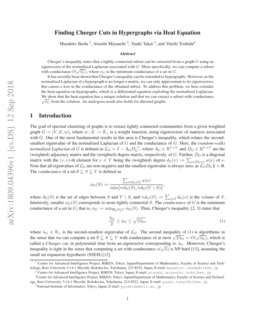 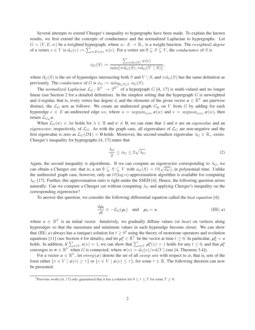 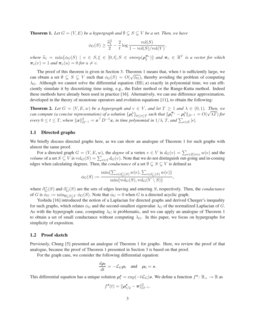 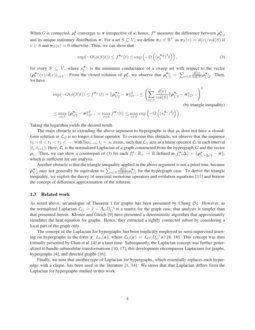 G=(V,E,w), where w:E→R+ is a weight function, using eigenvectors of matrices associated with G

. One of the most fundamental results in this area is Cheeger’s inequality, which relates the second-smallest eigenvalue of the normalized Laplacian of

where ∂G(S) is the set of edges between S and V∖S, and volG(S):=∑v∈SdG(v) is the volume of S. Intuitively, smaller ϕG(S) corresponds to more tightly connected S. The conductance of G is the minimum conductance of a set in G; that is, ϕG:=min∅⊊S⊊VϕG(S). Then, Cheeger’s inequality [2, 3] states that

where λG∈R+ is the second-smallest eigenvalue of LG. The second inequality of (1) is algorithmic in the sense that we can compute a set ∅⊊S⊊V with conductance of at most √2λG=O(√ϕG), which is called a Cheeger cut, in polynomial time from an eigenvector corresponding to λG. Moreover, Cheeger’s inequality is tight in the sense that computing a set with conductance o(√ϕ) is NP-hard [13], assuming the small set expansion hypothesis (SSEH) [12].

Several attempts to extend Cheeger’s inequality to hypergraphs have been made. To explain the known results, we first extend the concepts of conductance and the normalized Laplacian to hypergraphs. Let G=(V,E,w) be a weighted hypergraph, where w:E→R+ is a weight function. The (weighted) degree of a vertex v∈V is dG(v):=∑e∈E∣v∈ew(e). For a vertex set ∅⊊S⊊V, the conductance of S is

where ∂G(S) is the set of hyperedges intersecting both S and V∖S, and volG(S) has the same definition as previously. The conductance of G is ϕG:=min∅⊊S⊊VϕG(S).

The normalized Laplacian LG:RV→2RV of a hypergraph G [4, 17] is multi-valued and no longer linear (see Section 2 for a detailed definition). In the simplest setting that the hypergraph G is unweighted and d-regular, that is, every vertex has degree d

, and the elements of the given vector

x∈RV are pairwise distinct, the LG acts as follows: We create an undirected graph Gx on V from G by adding for each hyperedge e∈E an undirected edge uv, where u=argminw∈ex(w) and v=argmaxw∈ex(w), then return LGxx.

When LG(v)∋λv holds for λ∈R and v≠0, we can state that λ and v are an eigenvalue and an eigenvector, respectively, of LG. As with the graph case, all eigenvalues of LG are non-negative and the first eigenvalue is zero as LG(D1)=0 holds. Moreover, the second-smallest eigenvalue λG∈R+ exists. Cheeger’s inequality for hypergraphs [4, 17] states that

Again, the second inequality is algorithmic. If we can compute an eigenvector corresponding to λG, we can obtain a Cheeger cut; that is, a set ∅⊊S⊊V with ϕG(S)=O(√ϕG), in polynomial time. Unlike the undirected graph case, however, only an O(logn)-approximation algorithm is available for computing λG [17]. Further, this approximation ratio is tight under the SSEH [4]. Hence, the following question arises naturally: Can we compute a Cheeger cut without computing λG and applying Cheeger’s inequality on the corresponding eigenvector?

To answer this question, we consider the following differential equation called the heat equation [4]:

where s∈RV is an initial vector. Intuitively, we gradually diffuse values (or heat) on vertices along hyperedges so that the maximum and minimum values in each hyperedge become closer. We can show that (HE;s) always has a (unique) solution for t≥0555Previous works [4, 17] only guaranteed that it has a solution for 0≤t≤T for some T≥0. using the theory of monotone operators and evolution equations [11] (see Section 4 for details), and let ρst∈RV be the vector at time t≥0. In particular, ρs0=s holds. In addition, if ∑v∈Vs(v)=1, we can show that ∑v∈Vρst(v)=1 holds for any t≥0, and that ρst converges to π∈RV when G is connected, where π(v)=dG(v)/vol(V) (see [4, Theorem 3.4]).

For a vector x∈RV, let sweep(x) denote the set of all sweep sets with respect to x; that is, sets of the form either {v∈V∣x(v)≥τ} or {v∈V∣x(v)≤τ}, for some τ∈R. The following theorem can now be presented.

Let G=(V,E) be a hypergraph and ∅⊊S⊊V be a set. Then, we have

The proof of this theorem is given in Section 3. Theorem 1 means that, when t is sufficiently large, we can obtain a set ∅⊊S⊊V such that ϕG(S)=O(√ϕG), thereby avoiding the problem of computing λG. Although we cannot solve the differential equation (HE;s) exactly in polynomial time, we can efficiently simulate it by discretizing time using, e.g., the Euler method or the Runge-Kutta method. Indeed these methods have already been used in practice [16]. Alternatively, we can use difference approximation, developed in the theory of monotone operators and evolution equations [11], to obtain the following:

We briefly discuss directed graphs here, as we can show an analogue of Theorem 1 for such graphs with almost the same proof.

For a directed graph G=(V,E,w), the degree of a vertex v∈V is dG(v)=∑e∈E∣v∈ew(e) and the volume of a set S⊆V is volG(S)=∑v∈SdG(v). Note that we do not distinguish out-going and in-coming edges when calculating degrees. Then, the conductance of a set ∅⊊S⊊V is defined as

where ∂+G(S) and ∂−G(S) are the sets of edges leaving and entering S, respectively. Then, the conductance of G is ϕG:=min∅⊊S⊊VϕG(S). Note that ϕG=0 when G is a directed acyclic graph.

Yoshida [16] introduced the notion of a Laplacian for directed graphs and derived Cheeger’s inequality for such graphs, which relates ϕG and the second-smallest eigenvalue λG of the normalized Laplacian of G. As with the hypergraph case, computing λG is problematic, and we can apply an analogue of Theorem 1 to obtain a set of small conductance without computing λG. In this paper, we focus on hypergraphs for simplicity of exposition.

For the graph case, we consider the following differential equation:

This differential equation has a unique solution ρst=exp(−tLG)s. We define a function fs:R+→R as

When G is connected, ρst converges to π irrespective of s; hence, fs measures the difference between ρst/2 and its unique stationary distribution π. For a set S⊆V, we define πS∈RV as πS(v)=d(v)/vol(S) if v∈S and πS(v)=0 otherwise. Then, we can show that

for every S⊆V, where κπSt is the minimum conductance of a sweep set with respect to the vector (ρπSt(v)/d(v))v∈V. From the closed solution of ρst, we observe that ρπSt/2=∑v∈Sd(v)vol(S)ρπvt/2. Then, we have

The main obstacle to extending the above argument to hypergraphs is that ρt does not have a closed-form solution as LG is no longer a linear operator. To overcome this obstacle, we observe that the sequence t0=0<t1<t2<⋯ with limi→∞ti=∞ exists, such that LG acts as a linear operator Li in each interval [ti,ti+1). Here, Li is the normalized Laplacian of a graph constructed from the hypergraph G and the vector ρti. Then, we can show a counterpart of (3) for each fsi:R+→R defined as fsi(Δ)=∥ρsti+Δ/2−π∥, which is sufficient for our analysis.

Another obstacle is that the triangle inequality applied in the above argument is not a priori true, because ρπSt/2 may not generally be equivalent to ∑v∈Sd(v)vol(S)ρπvt/2 for the hypergraph case. To derive the triangle inequality, we exploit the theory of maximal monotone operators and evolution equations [11] and borrow the concept of difference approximation of the solution.

As noted above, an analogue of Theorem 1 for graphs has been presented by Chung [5]. However, as the normalized Laplacian LG=I−AGD−1G is a matrix for the graph case, that analysis is simpler than that presented herein. Kloster and Gleich [9] have presented a deterministic algorithm that approximately simulates the heat equation for graphs. Hence, they extracted a tightly connected subset by considering a local part of the graph only.

x⊤LG(x), where LG(x)=LG(D−1Gx) [8, 18]. This concept was then formally presented by Chan et al. [4] at a later time. Subsequently, the Laplacian concept was further generalized to handle submodular transformations [10, 17]; this development encompasses Laplacians for graphs, hypergraphs [4], and directed graphs [16].

The remainder of this paper is organized as follows. In Section 2, we introduce the basic concepts used throughout this paper. In Section 3, we prove Theorem 1. We show that (HE;s) has a unique solution in Section 4. In Section 5, we prove the triangle inequality discussed in Section 1.2. A proof of Theorem 2 is given in Section 6.

Here, we formally define the (random-walk) normalized Laplacian for hypergraphs. Let G=(V,E,w) be a hypergraph. For each hyperedge e∈E, we define a polytope Be=conv({1u−1v∣u,v∈e}), where conv(S) denotes the convex hull of S⊆RV. Then, the Laplacian L:RV→RV of G is defined as

and the normalized Laplacian is defined as LG:x↦LG(D−1Gx).

We can understand Laplacian for hypergraphs in terms of submodular functions. Let Fe:2V→{0,1} be the cut function associated with a hyperedge e∈E; that is, Fe(S)=1 if and only if S∩e≠∅ and (V∖S)∩e≠∅. It is known that Fe is submodular; that is, Fe(S)+Fe(T)≥Fe(S∩T)+Fe(S∪T) holds for every S,T⊆V. Then, Be is the base polytope of Fe and be in (4) is chosen so that b⊤ex=fe(x), where fe:RV→R is the Lovász extension of Fe. See [7] for detailed definitions of these concepts.

When G=(V,E,w) is a graph, its Laplacian LG∈RV×V and the (random-walk) normalized Laplacian LG∈RV×V are defined as DG−AG and IG−AGD−1G, respectively. Indeed, this coincides with (4) when we regard G as a hypergraph with each hyperedge having size two.

Let us briefly review some facts regarding the heat equation (HE;s). We say that {ρt}t≥0 is a solution of (HE;s) if ρt is absolutely continuous with respect to t (hence, ρt is differentiable at almost all t) and ρ0=s, and satisfies ddtρt∈−LG(ρt) for almost all t≥0. As discussed in Section 4 below, the heat equation (HE;s) always has a unique solution. In addition, when G is connected, ρt converges to π as t→∞ for any s∈RV with ∑v∈Vs(v)=1, as mentioned previously.

where Li is the normalized Laplacian associated with Gi. Hence, we can write the solution ρi,Δ:=ρti+Δ for Δ∈[0,ti+1−ti) as

Although ρi,Δ was originally defined for Δ∈[0,ti+1−ti), we can extend it to any Δ≥0 using (5). Note that, when we wish to stress the initial vector, we write ρst, ρsi,Δ, etc.

In this section, we prove Theorem 1.

Consider the heat equation (HE;s). For each i∈Z+, we define a function fi:R+→R as

Note that, what we wish to stress the initial vector s∈RV, we write fsi. As the following proposition implies, the value of fi(Δ) indicates the difference between ρi,Δ/2 and the stationary distribution π.

The second equality is obtained through a direct calculation. ∎

Theorem 1 is obtained by bounding fi(Δ) from above and below. To obtain an upper bound, we define

Next, we consider a lower bound on fi(Δ), when the initial vector s is πS for some set S⊆V. For simplicity, we write ϕ0(S) to denote ϕG0(S).

The following lemma is useful to relate the heat equation solutions to the different initial vectors.

Based on these lemmas, we show the following:

To summarize, we have obtained the following inequality:

Hence, by taking the logarithm, we have

The following lemma relates the conductance of a set in a hypergraph G and that in a graph in G(G,x).

In this section, we derive several inequalities on fi that will be useful later. Note that the proofs are deferred to Section A. We define Ri:RV→R as

We first derive a lower bound on the log derivative of fi(Δ).