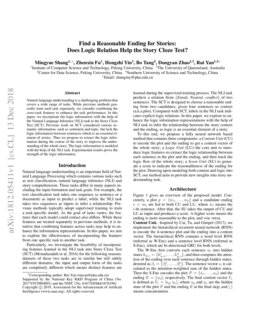 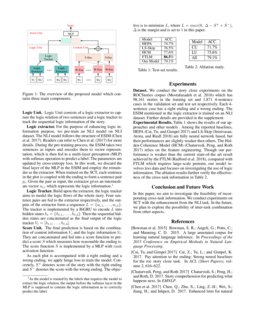 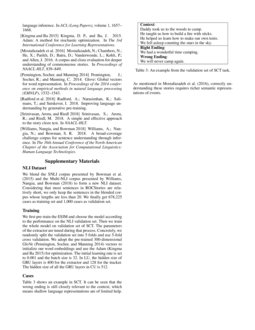 Natural language understanding is an important field of Natural Language Processing which contains various tasks such as text classification, natural language inference (NLI) and story comprehension. These tasks differ in many aspects including the input formation and task goals. For example, the text classification task takes one sequence (a sentence or a document) as input to predict a label, while the NLI task takes two sequences as inputs to infer a relationship. Previous methods typically adopt supervised training to train a task-specific model. As the goal of tasks varies, the features that each model could extract also differs. While these features are treated separately in previous methods, it is intuitive that combining features across tasks may help to enhance the information representations. In this paper, we aim to explore the effectiveness of incorporating the features from one specific task to another task.

Particularly, we investigate the feasibility of incorporating features learned in the NLI task into Story Cloze Test (SCT) [Mostafazadeh et al.2016] for the following reasons: datasets of these two tasks are in similar but still subtly different domains; the input and output form of the tasks are completely different which means distinct features are learned during the supervised training process. The NLI task predicts a relation from {Entail, Neutral, conflict} of two sentences. The SCT is designed to choose a reasonable ending from two candidates, given four sentences as context (a.k.a plot). Compared with SCT, labels in the NLI task indicates explicit logic relations. In this paper, we explore to enhance the logic information representations with the help of NLI task to infer the relationship between the story context and the ending, as logic is an essential element of a story.

To this end, we propose a fully neural network based method that contains three components: a

(CU) to encode the plot and the ending to get a content vector of the whole story; a

Logic Unit (LU)–the core unit to introduce logic features–to extract the logic relationship between each sentence in the plot and the ending, and then track the logic flow of the whole story; a Score Unit (SU) to generate a score to indicate the reasonableness of the ending for the plot. Drawing upon modeling both content and logic into SCT, our method aims to provide new insights into story understanding task.

Figure 1 gives an overview of the proposed model. Concretely, a plot p={w1,…,w4} and a candidate ending e=w5 are fed to both CU and LU, where wi means the i-th sentence. After that, the SU takes the output of CU and LU as input and produces a score. A higher score means the ending is more reasonable to the plot, and vise versa.

Logic Unit. Logic Unit consists of a logic extractor to capture the logic relation of two sentences and a logic tracker to track the sequential logic information of the story.

Logic extractor. For the purpose of enhancing logic information purpose, we pre-train an NLI model on NLI dataset. The NLI model follows the structure of ESIM [Chen et al.2017]

. Readers can refer to chen2017enhanced (chen2017enhanced) for more details. During the pre-training process, the ESIM takes two sentences as inputs and encodes them to vector representation, which is then fed to a multi-layer perceptron (MLP) with softmax operation to predict a label. The parameters are updated by cross-entropy loss. In this work, we discard the final layer of the MLP in the ESIM and employ the remainder as the extractor. When trained on the SCT, each sentence in the plot is coupled with the ending to form a sentence pair

pi. Given the pair as input, the extractor gives an intermediate vector ul,i which represents the logic information.111

As the model is trained by the labels that requires the model to extract the logic relation, the output before the softmax layer in the MLP is supposed to contain the logic information as to correctly predict the label.

Score Unit. The final prediction is based on the combination of content information Vc and the logic information Vl. They are concatenated and fed into a score function to predict a score S which measures how reasonable the ending is. The score function S is implemented by a MLP with tanhactivation function.

As each plot is accompanied with a right ending and a wrong ending, we apply hinge loss to train the model. Concretely, S+ denotes score of the story with the right ending and S− denotes the score with the wrong ending. The objective is to minimize L, where L=max(0, Δ−S++S−), Δ is the margin and is set to 1 in this paper.

Dataset. We conduct the story cloze experiments on the ROCStories corpus [Mostafazadeh et al.2016] which has 98,161 stories in the training set and 1,871 4-sentence cases in the validation set and test set respectively. Each 4-sentence case has a right ending and a wrong ending. The ESIM mentioned in the logic extractor is trained on an NLI dataset. Further details are provided in the supplement.

Experimental Results. Table Architecture shows the results of our approaches and other models . Among the reported baselines, HEPA [Cai, Tu, and Gimpel2017] and LS-Skip [Srinivasan, Arora, and Riedl2018] are fully neural network based, but their performances are slightly weaker then others. The Hidden Coherence Model (HCM) [Chaturvedi, Peng, and Roth2017] relies on the feature engineering. Though our performance is weaker than the current state-of-the art result achieved by the FTLM [Radford et al.2018], compared with FTLM which requires large-scale pretrain, our model involves less data and focuses on investigating the use of logic information. The ablation results further verify the effectiveness of the cross-task information in Table Architecture.

In this paper, we aim to investigate the feasibility of incorporating cross-task information. We conduct experiments on SCT with the enhancement from the NLI task. In the future, we plan to explore the possibility of inter-task combination from other aspects.

We blend the SNLI corpus presented by bowman2015large (bowman2015large) and the Multi-NLI corpus presented by williams2017broad (williams2017broad) to form a new NLI dataset. Considering that most sentences in ROCStories are relatively short, we only keep the sentences in the blended corpus whose lengths are less than 20. We finally get 678,225 cases as training set and 1,000 cases as validation set.

We first pre-train the ESIM and choose the model according to the performance on the NLI validation set. Then we train the whole model on validation set of SCT. The parameters of the extractor are tuned during that process. Concretely, we randomly split the validation set into 5 folds and use 5-fold cross validation. We adopt the pre-trained 300-dimensional GloVe [Pennington, Socher, and Manning2014] vectors to initialize our word embeddings and use the Adam [Kingma and Ba2015] for optimization. The initial learning rate is set to 0.001 and the batch size is 32. In LU, the hidden size of GRU layers is 400 for the extractor and 128 for the tracker. The hidden size of all the GRU layers in CU is 512.