Fifty Years of Prolog and Beyond

Both logic programming in general, and Prolog in particular, have a long and fascinating history, intermingled with that of many disciplines they inherited from or catalyzed. A large body of research has been gathered over the last 50 years, supported by many Prolog implementations. Many implementations are still actively developed, while new ones keep appearing. Often, the features added by different systems were motivated by the interdisciplinary needs of programmers and implementors, yielding systems that, while sharing the "classic" core language, and, in particular, the main aspects of the ISO-Prolog standard, also depart from each other in other aspects. This obviously poses challenges for code portability. The field has also inspired many related, but quite different languages that have created their own communities. This article aims at integrating and applying the main lessons learned in the process of evolution of Prolog. It is structured into three major parts. Firstly, we overview the evolution of Prolog systems and the community approximately up to the ISO standard, considering both the main historic developments and the motivations behind several Prolog implementations, as well as other logic programming languages influenced by Prolog. Then, we discuss the Prolog implementations that are most active after the appearance of the standard: their visions, goals, commonalities, and incompatibilities. Finally, we perform a SWOT analysis in order to better identify the potential of Prolog, and propose future directions along which Prolog might continue to add useful features, interfaces, libraries, and tools, while at the same time improving compatibility between implementations. 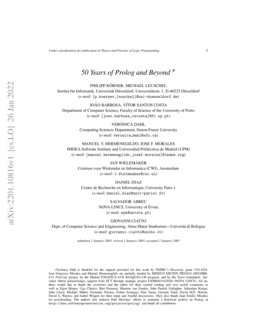 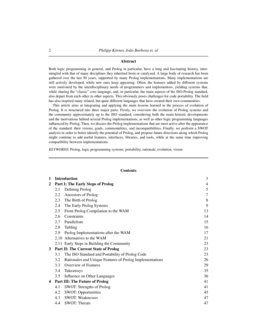 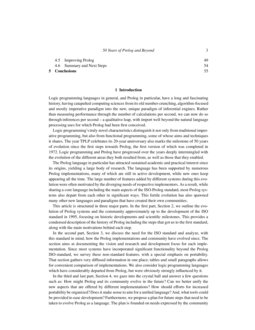 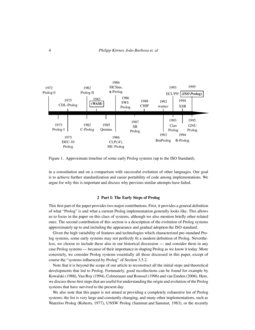 On the Evolution of Programming Languages

Even though the core of the Prolog programming language has been standar...
David Geleßus, et al. ∙

Logic Programming Applications: What Are the Abstractions and Implementations?

This article presents an overview of applications of logic programming, ...
Yanhong A. Liu, et al. ∙

Advances in Machine Learning for the Behavioral Sciences

The areas of machine learning and knowledge discovery in databases have ...
Tomas Kliegr, et al. ∙

Quantitative aspects of computation are related to the use of both physi...
Alessandro Aldini, et al. ∙

A data-supported history of bioinformatics tools

Since the advent of next-generation sequencing in the early 2000s, the v...
Levin Clément, et al. ∙