Symmetry is key in classical and modern physics. A striking example is conservation of energy as a consequence of time-shift invariance from Noether's theorem. Symmetry is likewise a key element in statistics, which, as also physics, provide models for real world phenomena. Sufficiency, conditionality, and invariance are examples of basic principles. Galili and Meilijson (2016) and Mandel (2020) illustrate the first two principles very nicely by considering the scaled uniform model. We illustrate the third principle by providing further results which give optimal inference for the scaled uniform by symmetry considerations. The proofs are simplified by relying on fiducial arguments as initiated by Fisher (1930). Keywords: Data generating equation; Optimal equivariant estimate; Scale family; Conditionality principle; Minimal sufficient; Uniform distribution; 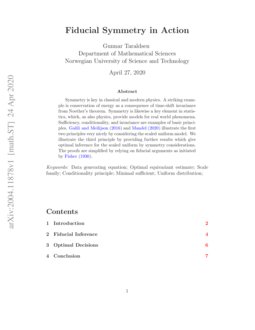 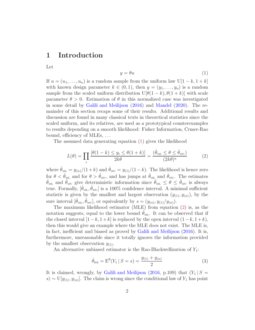 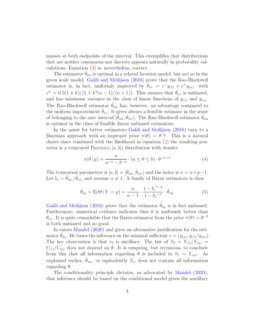 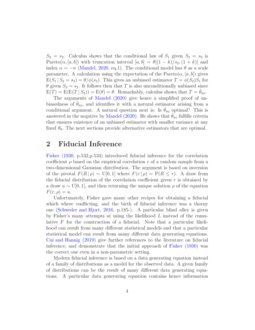 If u=(u1,…,un) is a random sample from the uniform law U[1−k,1+k] with known design parameter k∈(0,1), then y=(y1,…,yn) is a random sample from the scaled uniform distribution U[θ(1−k),θ(1+k)] with scale parameter θ>0. Estimation of θ in this normalized case was investigated in some detail by Galili and Meilijson (2016) and Mandel (2020). The remainder of this section recaps some of their results. Additional results and discussion are found in many classical texts in theoretical statistics since the scaled uniform, and its relatives, are used as a prototypical counterexamples to results depending on a smooth likelihood: Fisher Information, Crámer-Rao bound, efficiency of MLEs, …

The maximum likelihood estimator (MLE) from equation (2) is, as the notation suggests, equal to the lower bound ^θ\tiny ML. It can be observed that if the closed interval [1−k,1+k] is replaced by the open interval (1−k,1+k), then this would give an example where the MLE does not exist. The MLE is, in fact, inefficient and biased as proved by Galili and Meilijson (2016). It is, furthermore, unreasonable since it totally ignores the information provided by the smallest observation y(1).

An alternative unbiased estimator is the Rao-Blackwellization of

has point masses at both endpoints of the interval. This exemplifies that distributions that are neither continuous nor discrete appears naturally in probability calculations. Equation (

is unbiased, and has minimum variance in the class of linear functions of

In the quest for better estimators Galili and Meilijson (2016) turn to a Bayesian approach with an improper prior π(θ)=θ−p. This is a natural choice since combined with the likelihood in equation (2) the resulting posterior is a truncated Pareto(α,[a,b]) distribution with density:

Galili and Meilijson (2016) prove that the estimator ^θ\tiny B2 is in fact unbiased. Furthermore, numerical evidence indicates that it is uniformly better than ^θ\tiny LV. It is quite remarkable that the Bayes estimator from the prior π(θ)=θ−2 is both unbiased and so good.

In enters Mandel (2020) and gives an alternative justification for the estimator ^θ\tiny B2. He bases the inference on the minimal sufficient s=(y(n),y(1)/y(n)). The key observation is that s2 is ancillary: The law of S2=Y(1)/Y(n)=U(1)/U(n) does not depend on θ. It is tempting, but erroneous, to conclude from this that all information regarding θ is included in S1=Y(n). As explained earlier, ^θ\tiny ML, or equivalently S1, does not contain all information regarding θ.

The conditionality principle dictates, as advocated by Mandel (2020), that inference should be based on the conditional model given the ancillary S2=s2. Calculus shows that the conditional law of S1 given S2=s2 is Pareto(α,[a,b]) with truncation interval [a,b]=θ[(1−k)/s2,(1+k)] and index α=−n (Mandel, 2020, eq.1). The conditional model has θ as a scale parameter. A calculation using the expectation of the Pareto(α,[a,b]) gives E(S1\operatornamewithlimits∣S2=s2)=θ/ϕ(s2). This gives an unbiased estimator T=ϕ(S2)S1 for θ given S2=s2. It follows then that T is also unconditionally unbiased since E(T)=E(E(T\operatornamewithlimits∣S2))=E(θ)=θ. Remarkably, calculus shows that T=^θ\tiny B2.

The arguments of Mandel (2020) give hence a simplified proof of unbiasedness of ^θ\tiny B2, and identifies it with a natural estimator arising from a conditional argument. A natural question next is: Is ^θ\tiny B2 optimal? This is answered in the negative by Mandel (2020). He shows that ^θ\tiny B2 fulfills criteria that ensures existence of an unbiased estimator with smaller variance at any fixed θ0. The next sections provide alternative estimators that are optimal.

Fisher (1930, p.532,p.534) introduced fiducial inference for the correlation coefficient ρ based on the empirical correlation r

of a random sample from a two-dimensional Gaussian distribution. The argument is based on inversion of the pivotal

Unfortunately, Fisher gave many other recipes for obtaining a fiducial which where conflicting, and the birth of fiducial inference was a thorny one (Schweder and Hjort, 2016, p.185-). A particular blind alley is given by Fisher’s many attempts at using the likelihood L instead of the cumulative F for the construction of a fiducial. Note that a particular likelihood can result from many different statistical models and that a particular statistical model can result from many different data generating equations. Cui and Hannig (2019) give further references to the literature on fiducial inference, and demonstrate that the initial approach of Fisher (1930) was the correct one even in a non-parametric setting.

3 by equation (12) that this fiducial gives an estimate with uniformly minimum expected squared error.

A fiducial model is specified by taking equation (1), y=θu, as a data generating equation for the scaled uniform. The direct recipe from the previous is then to draw u and solve for the parameter θ. Unfortunately, this fails since there are n equations for the one unknown θ. Intuitively, the solution is given by observing that u must be conditioned to be a point on the ray ly={u\operatornamewithlimits∣u=θ−1y,θ>0}. Mathematically, this is not sufficient, but it is by instead conditioning on a function of u with this line as a level set. The set of different possible rays gives a partition of the set of possible u’s. Let m(u) have exactly the partition as its level sets. The required conditioning is then uniquely determined by conditioning u on m(u)=my where ly={u\operatornamewithlimits∣m(u)=my}. The recipe is then to draw u from its initial distribution conditionally on m(u)=my, and then return θ=yn/un as a unique draw from the fiducial.

In a certain sense the analysis is now finished. The fiducial in equation (7) gives our state of knowledge regarding the unknown model θ based on the fiducial model in equation (1), or equivalently equation (6), and the observation y. This is, as Fisher intended, an alternative to a Bayesian posterior distribution.

The analysis can be continued in many ways depending on the question of interest. The original question here was: How should the parameter θ

be estimated? This question is now simpler than initially because we have a probability distribution for

θ given in equation (7). What guess for θ should we choose when its probability distribution is known?

Decision theory gives a possible route. The guess, or estimate, is a decision. One possibility is to minimize the risk given by

where δ is the Dirac delta function. The density of Θ has a maximum at ^θ\tiny ML, so the result is then the maximum likelihood estimator. In a Baysian analysis this corresponds to choosing the maximum a posterior (MAP) estimate.

Another possibility is to minimize the risk given by

corresponding to expected squared error loss (θ−^θ)2. The resulting estimate is then ^θ\tiny B1 as given in equation (5) with p=1. This is so because the fiducial coincides with Bayesian posterior for the case p=1. It follows similarly that the estimator ^θ\tiny B2 minimizes the risk r=E[Θ−1(Θ−^θ)2]

Except for ^θ\tiny B2 none of the above estimators are unbiased. The property of being unbiased is a natural demand for estimating a location parameter, but not so for a scale parameter. A natural demand is to require scale invariance. This translates into demanding that ^θ/θ is a pivotal quantity. An estimator ^θ is said to be scale equivariant if this demand is fulfilled. As also noted by Galili and Meilijson (2016, p.110) this requirement holds for all suggested estimators here. The natural question is then: Is there an optimal scale equivariant estimator? As explained by Berger (1985, p.388-) it is natural to only consider risk corresponding to invariant loss.

A possible invariant risk is given by

As the notation suggests this equals the Bayes posterior estimator given in equation (5) with p=3. This can be seen by observing (1−^θ/Θ)2=θ−2(θ−^θ)2, and using the simple form of the fiducial distribution in this particular case.

The observation also shows that ^θ\tiny B3=ψ(y) has uniformly minimal squared error loss in the class of scale equivariant estimators. The claim follows from the frequentist risk

Another possible invariant risk is given by

It has been proven that the estimators ^θ\tiny B3 and ^θ\tiny SC given in equation (5) and equation (14) respectively are optimal equivariant estimators in the sense of uniformly minimizing the frequentist risks Eθ(^θ\tiny B3−θ)2 and Eθ(ln^θ\tiny SC−lnθ)2 respectively. These results follows from invariance and complements the results for the scaled uniform as previously discussed by Galili and Meilijson (2016) and Mandel (2020). Sufficiency, conditionality, and invariance are central themes in theoretical statistics and in the arguments given here.

Existence of a uniformly minimum-variance unbiased (UMVU) estimator is left open. It is known, as demonstrated by Rao (1973, p.379, Exercise 11), that in the case where the minimal sufficient statistic S is not complete some parameters may have UMVU estimators, but others may not. It would be interesting, based on curiosity, to know if a UMVU estimator for θ exists, but equivariance is a more natural demand for the case of a scale parameter.

In retrospect, it was perhaps fortunate that Fisher invented many and conflicting roads in his attempts to arrive at fiducial inference. Blind alleys are blind alleys, but often there are rewards along the way. This has certainly been the case also for the many different versions of fiducial inference that has been suggested. Fisher (1930, p.532,p.534) invented both confidence intervals and confidence distributions in his initial attempt. The theory of the latter topic is still in its infancy, but considerable progress have been made lately as documented by Schweder and Hjort (2016).

The fiducial distribution of Θ is Pareto(n,[^θ\tiny ML,^θ\tiny MU]) and it is a confidence distribution. This follows from the general arguments given by Taraldsen and Lindqvist (2013). It can be concluded that fiducial inference as initiated by Fisher (1930) can be used to obtain both optimal estimators and exact confidence distributions. This has here been demonstrated for the scaled uniform distribution which is otherwise used as a counterexample for obtaining good theoretical results.