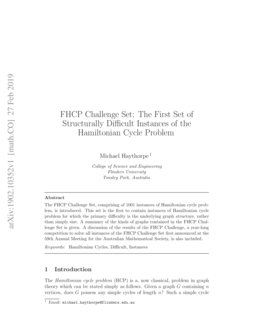 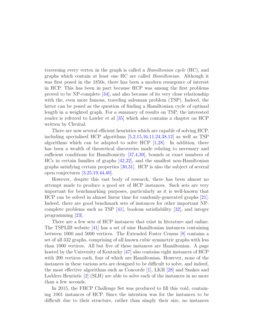 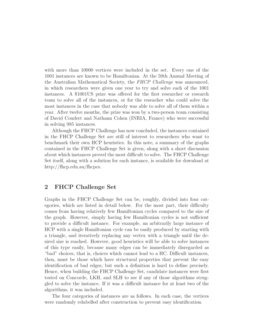 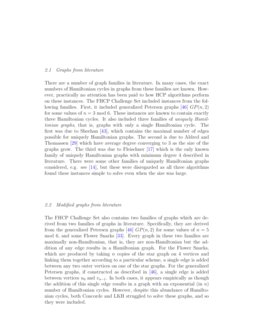 The Hamiltonian cycle problem (HCP) is a, now classical, problem in graph theory which can be stated simply as follows. Given a graph G containing n vertices, does G possess any simple cycles of length n? Such a simple cycle traversing every vertex in the graph is called a Hamiltonian cycle (HC), and graphs which contain at least one HC are called Hamiltonian. Although it was first posed in the 1850s, there has been a modern resurgence of interest in HCP. This has been in part because HCP was among the first problems proved to be NP-complete [34], and also because of its very close relationship with the, even more famous, traveling salesman problem (TSP). Indeed, the latter can be posed as the question of finding a Hamiltonian cycle of optimal length in a weighted graph. For a summary of results on TSP, the interested reader is referred to Lawler et al [35] which also contains a chapter on HCP written by Chvátal.

There are now several efficient heuristics which are capable of solving HCP, including specialised HCP algorithms

However, despite this vast body of research, there has been almost no attempt made to produce a good set of HCP instances. Such sets are very important for benchmarking purposes, particularly as it is well-known that HCP can be solved in almost linear time for randomly-generated graphs [21]. Indeed, there are good benchmark sets of instances for other important NP-complete problems such as TSP [41], boolean satisfiability [32], and integer programming [23].

There are a few sets of HCP instances that exist in literature and online. The TSPLIB website [41] has a set of nine Hamiltonian instances containing between 1000 and 5000 vertices. The Extended Foster Census [8] contains a set of all 332 graphs, comprising of all known cubic symmetric graphs with less than 1000 vertices. All but five of these instances are Hamiltonian. A page hosted by the University of Kentucky [47] also contains eight instances of HCP with 200 vertices each, four of which are Hamiltonian. However, none of the instances in these various sets are designed to be difficult to solve, and indeed, the most effective algorithms such as Concorde [1], LKH [28] and Snakes and Ladders Heuristic [2] (SLH) are able to solve each of the instances in no more than a few seconds.

In 2015, the FHCP Challenge Set was produced to fill this void, containing 1001 instances of HCP. Since the intention was for the instances to be difficult due to their structure, rather than simply their size, no instances with more than 10000 vertices were included in the set. Every one of the 1001 instances are known to be Hamiltonian. At the 59th Annual Meeting of the Australian Mathematical Society, the FHCP Challenge was announced, in which researchers were given one year to try and solve each of the 1001 instances. A $1001US prize was offered for the first researcher or research team to solve all of the instances, or for the reseacher who could solve the most instances in the case that nobody was able to solve all of them within a year. After twelve months, the prize was won by a two-person team consisting of David Coudert and Nathann Cohen (INRIA, France) who were successful in solving 985 instances.

Graphs in the FHCP Challenge Set can be, roughly, divided into four categories, which are listed in detail below. For the most part, their difficulty comes from having relatively few Hamiltonian cycles compared to the size of the graph. However, simply having few Hamiltonian cycles is not sufficient to provide a difficult instance. For example, an arbitrarily large instance of HCP with a single Hamiltonian cycle can be easily produced by starting with a triangle, and iteratively replacing any vertex with a triangle until the desired size is reached. However, good heuristics will be able to solve instances of this type easily, because many edges can be immediately disregarded as “bad” choices, that is, choices which cannot lead to a HC. Difficult instances, then, must be those which have structural properties that prevent the easy identification of bad edges, but such a definition is hard to define precisely. Hence, when building the FHCP Challenge Set, candidate instances were first tested on Concorde, LKH, and SLH to see if any of those algorithms struggled to solve the instance. If it was a difficult instance for at least two of the algorithms, it was included.

The four categories of instances are as follows. In each case, the vertices were randomly relabelled after construction to prevent easy identification.

The FHCP Challenge Set also contains two families of graphs which are derived from two families of graphs in literature. Specifically, they are derived from the generalized Petersen graphs [46] GP(n,2) for some values of n=5 mod 6, and some Flower Snarks [33]. Every graph in these two families are maximally non-Hamiltonian, that is, they are non-Hamiltonian but the addition of any edge results in a Hamiltonian graph. For the Flower Snarks, which are produced by taking n copies of the star graph on 4 vertices and linking them together according to a particular scheme, a single edge is added between any two outer vertices on one of the star graphs. For the generalized Petersen graphs, if constructed as described in [46], a single edge is added between vertices u0 and vn−1. In both cases, it appears empirically as though the addition of this single edge results in a graph with an exponential (in n) number of Hamiltonian cycles. However, despite this abundance of Hamiltonian cycles, both Concorde and LKH struggled to solve these graphs, and so they were included.

2.3 Graphs obtained by converting from other discrete problems

HCP is an NP-complete problem, and hence any instance of any problem in NP can be transformed into an instance of HCP; however, the process of doing so often results in a large increase in the size of the instance. Conversions between NP-complete problems that result in only linear growth in the size of the instance has been a recent topic of research, e.g. see [10, 9, 20, 18, 13]. A large number of problems were converted to HCP and tested for difficulty of the resulting instance. Instances from the Dominating Set problem, the n-queens problem, and the generalized Instant Insanity problem were found to be sufficiently difficult to be included in the FHCP Challenge Set. Although these conversions have not been formally described in literature, source code for them is provided at [26]. Instances derived from a popular puzzle game, Unium [45], were also included. In general, it seemed that SLH and LKH struggled to solve these instances, with Concorde successful for some but not others. Finally, instances of HCP which were recently derived from a famous combinatorial problem from campanology, specifically the search for peals in parts of bobs-only Stedman Triples [27], were also included; none of the algorithms tested were able to easily solve these instances.

2.4 Combinations of the above

Since some instances are easily solved by one algorithm but not another, a number of instances were constructed by combining different instances together in various configurations. The intention was that an algorithm would need to be sufficiently clever to solve each of the component instances. Alternatively, a clever pre-processing algorithm may be successful in decomposing the instances and solving them individually.

3 Results of the FHCP Challenge

As can be seen, no teams were successful in solving all instances of the FHCP Challenge Set, with all but two teams failing to solve even half of the instances. The sixteen graphs not solved by Cohen and Coudert were not solved in any of the submissions. These sixteen instance comprised three instances from [27], namely Sted4 (6930 vertices), Sted5 (5544 vertices) and Sted6 (4620 vertices), as well as thirteen instances made out of combinations of graphs which included at least one of Sted4, Sted5 and Sted6. Of all the instances included in the FHCP Challenge Set, these instances were by far the most resistant to attack from heuristics. It should be noted that two other instances from [27] were included, namely Sted10 (2772 vertices) and Sted20 (1386 vertices). Of these, Sted10 was only solved by Cohen and Coudert, and Sted20 was only solved by Johnson, and Cohen and Coudert.

The strong result by Cohen and Coudert was obtained by spending a significant amount of time decomposing the instances and searching for similar structures between instances. Cohen and Coudert also correctly identified that many instances were made up out of smaller instances, and used solutions of the latter to obtain solutions for the former. Cohen and Coudert describe their techniques and approaches to successfully winning the FHCP Challenge in [7].

Some of the instances were also able to be efficiently attacked after some consideration. For instance, the uniquely Hamiltonian graphs by Sheehan are extremely dense, but a simple preprocessing algorithm can reduce the graph to a trivial instance. The other uniquely Hamiltonian graphs, as well as the generalized Petersen graphs GP(n,2) with n=3 mod 6 can also be solved by recognising which family they belong to, and solving the graph isomorphism problem to obtain the original vertex labelling; this can be achieved in polynomial time since these instances all have very low maximum vertex degree [36].