We use the EMNIST dataset of handwritten digits to test a simple approach for few-shot learning. A fully connected neural network is pre-trained with a subset of the 10 digits and used for few-shot learning with untrained digits. Two basic ideas are introduced: during few-shot learning the learning of the first layer is disabled, and for every shot a previously unknown digit is used together with four previously trained digits for the gradient descend, until a predefined threshold condition is fulfilled. This way we reach about 90 accuracy after 10 shots. 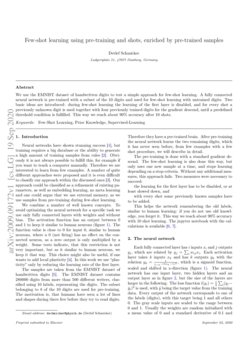 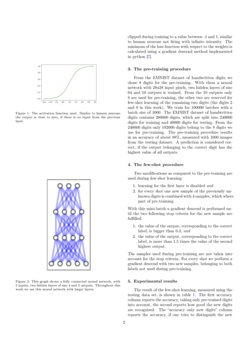 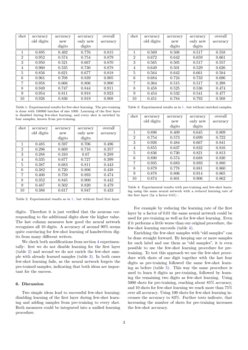 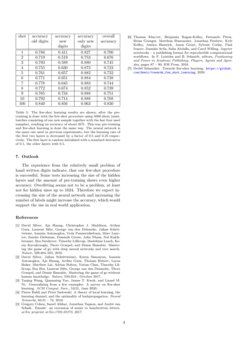 On Measuring the Intrinsic Few-Shot Hardness of Datasets

While advances in pre-training have led to dramatic improvements in few-...
Xinran Zhao, et al. ∙

Diabetic retinopathy(DR) is the main cause of blindness in diabetic pati...
Liangrui Pan, et al. ∙

Learning from One and Only One Shot

Humans can generalize from only a few examples and from little pre-train...
Haizi Yu, et al. ∙

Explore the Power of Dropout on Few-shot Learning

The generalization power of the pre-trained model is the key for few-sho...
Shaobo Lin, et al. ∙

Distributional Modeling on a Diet: One-shot Word Learning from Text Only

We test whether distributional models can do one-shot learning of defini...
Su Wang, et al. ∙

Neural networks have shown stunning success alphago , but training requires a big database or the ability to generate a high amount of training samples from rules alphago_zero

. Obviously it is not always possible to fulfill this, for example if you want to teach a computer manually. Therefore we are interested to learn from few examples. A number of quite different approaches were proposed and it is even difficult to classify our approach within the discussed ones

few_shot_review . Our approach could be classified as a refinement of existing parameters, as well as embedding learning, no meta learning and one could argue that we use external memory, as we use samples from pre-training during few-shot learning.

We combine a number of well known concepts. To avoid optimizing the neural network for a specific task we use only fully connected layers with weights and without bias. The activation function has an output between 0 and 1 to keep it similar to human neurons (figure

1). The function value is close to 0 for input 0, similar to human neurons, where a 0 (not firing) has no effect on the connected neuron, as a zero output is only multiplied by a weight. Some tests indicate, that this restriction is not very important, but as it similar to human neurons, we keep it that way. This choice might also be useful, if one wants to add local plasticity BALDI201651 . In this work we use “plasticity” only by reducing the learning rate of the first layer.

The samples are taken from the EMNIST dataset of handwritten digits cohen2017emnist . The EMNIST dataset contains 280000 digits from more than 500 different writers, classified using 10 labels, representing the digits. The subset belonging to 8 of the 10 digits are used for pre-training. The motivation is, that humans have seen a lot of lines and shapes during there live before they try to read digits. Therefore they have a pre-trained brain. After pre-training the neural network learns the two remaining digits, which it has never seen before, from few examples with a few shot procedure, we will describe in detail.

The pre-training is done with a standard gradient descend. The few-shot learning is also done this way, but only uses one new sample at a time, and stops learning depending on a stop-criteria. Without any additional measures, this approach fails. Two measures were necessary to succeed:

the learning for the first layer has to be disabled, or at least slowed down, and

with every shot some previously known samples have to be added.

This helps the network remembering the old labels, similar to human learning: if you do not use old knowledge, you forget it. This way we reach about 90% accuracy with 10 shot learning. The jupyter notebook with the calculations is available Kluyver:2016aa ; SMIC2020 .

Each fully connected layer has i inputs xi and j outputs yj, which are related by yj=∑iwijxi. Each activation layer takes k inputs xk and has k outputs yk with the relation yk=11−e−(3(xk−1))2

, which is a sigmoid function, scaled and shifted in x-direction (figure

The neural network has one input layer, two hidden layers and an output layer as in figure 2,

but the size of the layers are larger in the following. The loss function

l(yi)=12∑i(yi−^yi)2 is used, with ^y being the target value from the training data. Every output of the network corresponds to one of the labels (digits), with this target being 1 and all others 0. The gray scale inputs are scaled to the range between 0 and 1. Usually the weights are random initialized with a mean value of 0 and a standard derivative of 0.1 and clipped during training to a value between -1 and 1, similar to human neurons not firing with infinite intensity. The minimum of the loss function with respect to the weights is calculated using a gradient descend method implemented in python SMIC2020 .

From the EMNIST dataset of handwritten digits we chose 8 digits for the pre-training. With them a neural network with 28x28 input pixels, two hidden layers of size 64 and 10 outputs is trained. From the 10 outputs only 8 are used for pre-training, the other two are reserved for few-shot learning of the remaining two digits (the digits 2 and 8 in this work). We train for 100000 batches with a batch size of 1000. The EMNIST dataset of handwritten digits contains 280000 digits, which are split into 240000 digits for training and 40000 digits for testing. From the 240000 digits only 192000 digits belong to the 8 digits we use for pre-training. The pre-training procedure results in an accuracy of about 98%, measured with 1000 images from the testing dataset. A prediction is considered correct, if the output belonging to the correct digit has the highest value of all outputs.

Two modifications as compared to the pre-training are used during few-shot learning:

With this mini-batch a gradient descend is performed until the two following stop criteria for the new sample are fulfilled:

The result of the few-shot learning, measured using the testing data set, is shown in table 1. The first accuracy column reports the accuracy, taking only pre-trained digits into account, the second reports how good the new digits are recognized. The “accuracy only new digits” column reports the accuracy, if one tries to distinguish the new digits. Therefore it is just verified that the neurons corresponding to the additional digits show the higher value. The last column measures how good the neural network recognizes all 10 digits. A accuracy of around 90% seems quite convincing for few-shot learning of handwritten digits from many different writers.

We check both modifications from section 4 experimentally: first we do not disable learning for the first layer (table 2) and second we do not enrich the few-shot sample with already learned samples (table 3). In both cases few-shot learning fails, as the neural network forgets the pre-trained samples, indicating that both ideas are important for the success.

Two simple ideas lead to successful few-shot learning: disabling learning of the first layer during few-shot learning and adding samples from pre-training to every shot. Both measures could be integrated into a unified learning procedure.

For example by reducing the learning rate of the first layer by a factor of 0.01 the same neural network could be used for pre-training as well as for few-shot learning. Even if it performs a little worse than our original procedure, the few-shot learning succeeds (table 4).

The experience from the relatively small problem of hand written digits indicate, that our few-shot procedure is successful. Some tests increasing the size of the hidden layers and the amount of pre-training shows even higher accuracy. Overfitting seems not to be a problem, at least not for hidden sizes up to 1024. Therefore we expect increasing the size of the neural network and increasing the number of labels might increase the accuracy, which would support the use in real world application.