Recognizing a particular command or a keyword, keyword spotting has been widely used in many voice interfaces such as Amazon's Alexa and Google Home. In order to recognize a set of keywords, most of the recent deep learning based approaches use a neural network trained with a large number of samples to identify certain pre-defined keywords. This restricts the system from recognizing new, user-defined keywords. Therefore, we first formulate this problem as a few-shot keyword spotting and approach it using metric learning. To enable this research, we also synthesize and publish a Few-shot Google Speech Commands dataset. We then propose a solution to the few-shot keyword spotting problem using temporal and dilated convolutions on prototypical networks. Our comparative experimental results demonstrate keyword spotting of new keywords using just a small number of samples. 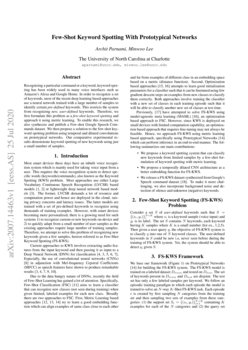 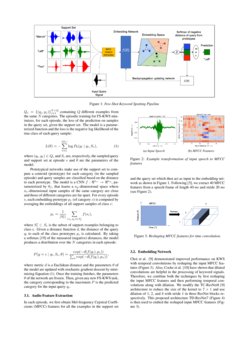 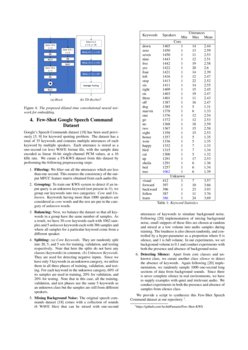 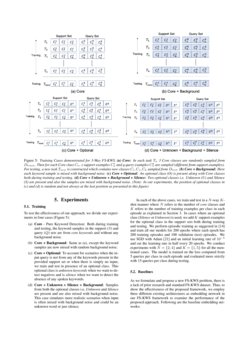 The goal of this work is to detect new spoken terms defined by users. Wh...
Jaemin Jung, et al. ∙

Microblogging platforms such as Twitter are increasingly being used in e...
Akansha Bhardwaj, et al. ∙

Most smart devices these days have an inbuilt voice recognition system which is mainly used for taking voice input from a user. This requires the voice recognition system to detect specific words (keywords/commands), also known as the Keyword Spotting (KWS) problem. Most approaches use either Large Vocabulary Continuous Speech Recognition (LVCSR) based models [LVCSR1, LVCSR2] or lightweight deep neural network based models [sainath2015convolutional]. The former, LVCSR demands a lot of resource and computation power and hence are deployed in the cloud, raising privacy concerns and latency issues. The latter models are trained with a set of pre-defined keywords to recognize using thousands of training examples. However, with smart devices becoming more personalized, there is a growing need for such systems 1) to recognize custom or new keywords on-device and 2) to quickly adapt from a small number of user samples as the existing approaches require large number of training samples. Therefore, we attempt to solve this problem of recognizing new keywords given a few samples, hereon referred to as Few-Shot Keyword Spotting (FS-KWS).

Current approaches to KWS involves extracting audio features from the input keyword and then passing it as input to a Deep Neural Network (DNN) for classification [chen2014small, sainath2015convolutional, zhang2017hello, tang2018deep, de2018neural]

. Especially, the use of convolutional neural networks (CNNs)

Due to the data hungry nature of DNNs, recently the field of Few-Shot Learning has gained a lot of attention. Specifically, Few-Shot Classification (FSC) [Chen2019ACL]

aims to learn a classifier that can recognize new classes (not seen during training) when given limited, labeled examples for each new class. Broadly there are two approaches to FSC. First, Metric Learning based approaches

[koch2015siamese, Vinyals2016MatchingNF, snell2017prototypical] try to learn a good embedding function which can align examples of same class close to each other and far from examples of different class in an embedding space based on a metric (distance function). Second, Optimization based approaches [ravi2016optimization, Finn2017ModelAgnosticMF] attempts to learn good initialization parameters for a classifier such that it can be finetuned using few gradient descent steps on examples from new classes to classify them correctly. Both approaches involve training the classifier with a new set of classes in each training episode such that it will be able to classify another new set of classes at test time.

Previously, [chen2018meta] have attempted to solve FS-KWS using model-agnostic meta learning (MAML) [Finn2017ModelAgnosticMF], an optimization based approach to FSC. However, since KWS is deployed on small devices with limited computation capability, an optimization based approach that requires fine-tuning may not always be feasible. Hence, we approach FS-KWS using metric learning based approach, specifically using Prototypical Networks [snell2017prototypical] which can perform inference in an end-to-end manner. The following summarizes our main contributions:

Consider a set S of user-defined keywords such that S={(si,yi)}N×Ki where si is a keyword sample (voice input) and yi is its label. The set S contains N keywords, each keyword having K samples where K is a small number (for ex., 1,2,5). Then given a user query q, the objective of FS-KWS system is to classify q into one of N keyword classes. The user-defined keywords in S could be new i.e, never seen before during the training of FS-KWS system. Yet, the system should be able to detect q, given S.

We base our framework (Figure 1) on Prototypical Networks [snell2017prototypical] for building the FS-KWS system. The FS-KWS model is trained on a labeled dataset Dtrain and tested on Dtest. The set of keywords present in Dtrain and Dtest are disjoint. The test set has only a few labeled samples per keyword. We follow an episodic training paradigm in which each episode the model is trained to solve an N-way K-Shot FS-KWS task. Each episode e is created by first sampling N categories from the training set and then sampling two sets of examples from these categories: (1) the support set Se={(si,yi)}N×Ki=1 containing K examples for each of the N categories and (2) the query set Qe={(qj,yj)}N×Qj=1 containing Q different examples from the same N categories. The episodic training for FS-KWS minimizes, for each episode, the loss of the prediction on samples in the query set, given the support set. The model is a parameterized function and the loss is the negative log likelihood of the true class of each query sample:

where (qt,yt)∈Qe and Se are, respectively, the sampled query and support set at episode e and θ are the parameters of the model.

Prototypical networks make use of the support set to compute a centroid (prototype) for each category (in the sampled episode) and query samples are classified based on the distance to each prototype. The model is a CNN f:Rnv→Rnp, parameterized by θf, that learns a np-dimensional space where nv-dimensional input samples of the same category are close and those of different categories are far apart. For every episode e, each embedding prototype pc (of category c) is computed by averaging the embeddings of all support samples of class c:

where Sce⊂Se is the subset of support examples belonging to class c. Given a distance function d, the distance of the query qt to each of the class prototypes pc is calculated. By taking a softmax [bridle1990probabilistic] of the measured (negative) distances, the model produces a distribution over the N categories in each episode:

where metric d is a Euclidean distance and the parameters θ

1). Once the training finishes, the parameters θ of the network are frozen. Then, given any new FS-KWS task, the category corresponding to the maximum P is the predicted category for the input query qt.

In each episode, we first obtain Mel-frequency Cepstral Coefficients (MFCC) features for all the examples in the support set and the query set which then act as input to the embedding network as shown in Figure 1. Following [zhang2017hello], we extract 40 MFCC features from a speech frame of length 40 ms

Choi et al. [choi2019temporal] demonstrated improved performance on KWS with temporal convolutions by reshaping the input MFCC features (Figure 3). Also, Cocke et al. [coucke2019efficient] have shown that dilated convolutions are helpful in the processing of keyword signals. Therefore, we combine both the techniques by first reshaping the input MFCC features and then performing temporal convolutions along with dilation. We modify the TC-ResNet8 [choi2019temporal] architecture to reduce the size of the kernel to 7×1 and use dilation of 1, 2, and 4 with stride 1 in three ResNet blocks respectively. This proposed architecture TD-ResNet7 (Figure 4) is then used to embed the reshaped input MFCC features (Figure 3).

Google’s Speech Commands dataset [warden2018speech] has been used previously [zhang2017hello, choi2019temporal] for keyword spotting problem. The dataset has a total of 35 keywords and contains multiple utterances of each keyword by multiple speakers. Each utterance is stored as a one-second (or less) WAVE format file, with the sample data encoded as linear 16-bit single-channel PCM values, at a 16 kHz rate. We curate a FS-KWS dataset from this dataset by performing the following preprocessing steps:

We provide a script to synthesize this Few-Shot Speech Command dataset at our repository 111https://github.com/ArchitParnami/Few-Shot-KWS.

To test the effectiveness of our approach, we divide our experiments in four cases (Figure 5):

In each of the above cases, we train and test in a N-way K-shot manner where N refers to the number of core classes and K refers to the number of training examples per class in each episode as explained in Section 3. In cases where an optional class (Silence or Unknown) is used, we add K support examples for the optional class in the support sets both during training and testing. We perform episodic training as suggested in [snell2017prototypical]

and train all our models for 200 epochs where each epoch has 200 training episodes and 100 validation (test) episodes. We use SGD with Adam

Table 2 lists the results for the three baselines and our proposed architecture on experiments mentioned in Section 5.1. Given a new 2-way-5-shot KWS task with keywords not seen during the training, our TD-ResNet7 model can classify an input query with ∼94% accuracy with the proposed FW-KWS pipeline. This is not even feasible with classical deep learning solutions withou FS-KWS formulation.

The TD-ResNet7 architecture also outperforms all the existing baselines architectures on all the test cases except in (b) Core + Background where the performance of TC-ResNet8 on 2-way 5-shot KWS is slightly better but the difference is not significant (p=0.36 while ANOVA for others presents p≪0.05). These results are illustrated in Figure 6

. As we increase the number of shots (samples per class), the overall performance improves for all architectures, yet the TD-ResNet7 architecture consistently outperforms other baselines. All the accuracy results are averaged over 100 test episodes and are reported with 95% confidence intervals.

In this work, we attempted to solve the keyword spotting problem using only limited samples from each keyword. We demonstrated that using prototypical networks with our proposed embedding model which uses temporal and dilated convolutions, can produce significant results with only few examples. We also synthesis and release a Few-Shot Google Speech command dataset for future research on Few-Shot Keyword Spotting.