In a standard anomaly detection problem, a detection model is trained in an unsupervised setting, under an assumption that the samples were generated from a single source of normal data. In practice, however, normal data often consist of multiple classes. In such settings, learning to differentiate between normal instances and anomalies among discrepancies between normal classes without large-scale labeled data presents a significant challenge. In this work, we attempt to overcome this challenge by preparing few examples from each normal class, which is not excessively costly. The above setting can also be described as a few-shot learning for multiple, normal classes, with the goal of learning a useful representation for anomaly detection. In order to utilize the limited labeled examples in training, we integrate the inter-class distances among the labeled examples in the deep feature space into the MAP loss. We derive their relations from an information-theoretic principle. Our empirical study shows that the proposed model improves the segmentation of normal classes in the deep feature space which contributes to identifying the anomaly class examples. 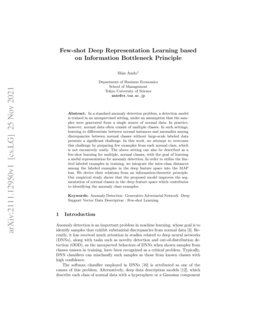 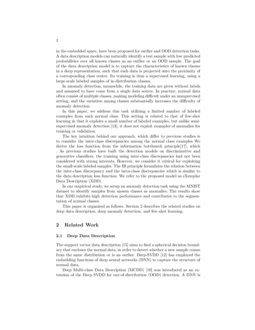 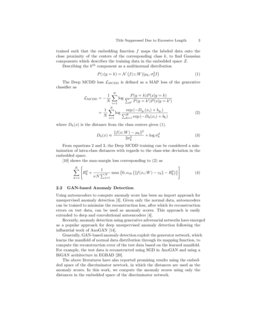 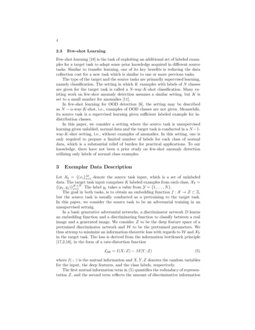 With the increase in the learning capability of deep convolution-based a...
Jin-ha Lee, et al. ∙

In out-of-distribution classification tasks, only some classes - the nor...
Duc Tam Nguyen, et al. ∙

Anomaly detection is an important problem in machine learning, whose goal is to identify samples that exhibit substantial discrepancies from normal data

. Recently, it has received much attention in studies related to deep neural networks (DNNs), along with tasks such as novelty detection and out-of-distribution detection (OOD), as the unexpected behaviors of DNNs when shown samples from classes unseen in training, have been recognized as a critical problem. Typically, DNN classifiers can misclassify such samples as those from known classes with high confidence.

The softmax classifier employed in DNNs [10] is attributed as one of the causes of this problem. Alternatively, deep data description models [12]

, which describe each class of normal data with a hypersphere or a Gaussian component in the embedded space, have been proposed for outlier and OOD detection tasks. A data description models can naturally identify a test sample with low predicted probabilities over all known classes as an outlier or an OOD sample. The goal of the data description model is to capture the characteristics of known classes in a deep representation, such that each data is projected onto the proximity of a corresponding class center. Its training is thus a supervised learning, using a large-scale labeled samples of in-distribution classes.

In anomaly detection, meanwhile, the training data are given without labels and assumed to have come from a single data source. In practice, normal data often consist of multiple classes, making modeling difficult under an unsupervised setting, and the variation among classes substantially increases the difficulty of anomaly detection.

The key intuition behind our approach, which differ to previous studies is to consider the inter-class discrepancies among the normal class examples We derive the loss function from the information bottleneck principle

[17], which . As previous studies have built the detection models on discriminative and generative classifiers, the training using inter-class discrepancies had not been considered with strong interests. However, we consider it critical for exploiting the small-scale labeled samples. The IB principle formulates the relation between the inter-class discrepancy and the intra-class discrepancies which is similar to the data description loss function. We refer to the proposed model as eXemplar Data Description (XDD).

In our empirical study, we setup an anomaly detection task using the MNIST dataset to identify samples from unseen classes as anomalies. The results show that XDD exhibits high detection performance and contributes to the segmentation of normal classes.

The support vector data description [15] aims to find a spherical decision boundary that encloses the normal data, in order to detect whether a new sample comes from the same distribution or is an outlier. Deep-SVDD [12] has employed the embedding functions of deep neural networks (DNN) to capture the structure of normal data.

Deep Multi-class Data Description (MCDD) [10] was introduced as an extension of the Deep SVDD for out-of-distribution (OOD) detection. A DNN is trained such that the embedding function f maps the labeled data onto the close proximity of the centers of the corresponding class k, to find Gaussian components which describes the training data in the embedded space Z.

Describing the kth component as a multinormal distribution

where Dk(x) is the distance from the class centers given (1).

From equations 2 and 3, the Deep MCDD training can be considered a minimization of intra-class distances with regards to the class-wise deviation in the embedded space.

[10] shows the max-margin loss corresponding to (2) as

[3]. Given only the normal data, autoencoders can be trained to minimize the reconstruction loss, after which its reconstruction errors on test data, can be used as anomaly scores. This approach is easily extended to deep and convolutional autoencoders [4].

Generally, GAN-based anomaly detection exploit the generator network, which learns the manifold of normal data distribution through its mapping function, to compute the reconstruction error of the test data based on the learned manifold. For example, the test data is reconstructed using SGD in AnoGAN and using a BiGAN architecture in EGBAD [20].

is the task of exploiting an additional set of labeled examples for a target task to adapt some prior knowledge acquired in different source tasks. Similar to transfer learning, one of its key benefits is reducing the data collection cost for a new task which is similar to one or more previous tasks.

The type of the target and the source tasks are primarily supervised learning, namely classification. The setting in which K examples with labels of N classes are given for the target task is called a N-way-K-shot classification. Many existing work on few-shot anomaly detection assumes a similar setting, but K is set to a small number for anomalies [11].

In few-shot learning for OOD detection [6], the setting may be described as N−α-way-K-shot, i.e., examples of OOD classes are not given. Meanwhile, its source task is a supervised learning given sufficient labeled example for in-distribution classes.

In this paper, we consider a setting where the source task is unsupervised learning given unlabled, normal data and the target task is conducted in a

N−1-way-K-shot setting, i.e., without examples of anomalies. In this setting, one is only required to prepare a limited number of labels for each class of normal data, which is a substantial relief of burden for practical applications. To our knowledge, there have not been a prior study on few-shot anomaly detection utilizing only labels of normal class examples.

Let XS={(xi}Mi=1 denote the source task input, which is a set of unlabeled data. The target task input comprises K labeled examples from each class, XT={(pj,yj)}K×Nj=1. The label yj takes a value from Y={1,…,N}.

The goal in both tasks, is to obtain an embedding function f:X→Z⊂Z, but the source task is usually conducted as a pretraining to the target task. In this paper, we consider the source task to be an adversarial training in an unsupervised settnig.

In a basic generative adversarial networks, a discriminator network D learns an embedding function and a discriminating function to classify between a real image and a generated image. We consider Z to be the deep feature space of a pretrained discriminator network and W to be the pretrained parameters. We thus attemp to minimize an information-theoretic loss with regards to W and XT in the target task. The loss is derived from the information bottleneck principle [17, 2, 16], in the form of a rate-distortion function

where I(⋅;⋅) is the mutual information and X,Y,Z

denotes the random variables for the input, the deep features, and the class labels, respectively.

The first term in the RHS of (5) is rewritten as follows as described in Appendix 0.A.

(7) shows that I(X;Z) primarily reflects the sum of standarized squared distances between all pairs of z and f(x). When we assume that the distances between the pairs from different classes are substantially smaller than those from the same class, we can consider this to be the inter-class distance term.

The second mutual informatio term, I(Y;Z), as derived in

I(Y;Z), can be rewritten such that it is identical to data description model except for the constant term. It thus represents the intra-class similarity among the components.

(8) is equivalent to the MAP loss except for the class bias which induces the samples to be mapped close to the class center.

, we thus induce the mapping which increases the distances among classes as well as closeness within the classes. Our intuition is that increasing the inter-class distances in the embedded space is critical for the task at hand, because it can increase the robustness of the model estimated from smaller-scale data, and also reduce the probability that anomalies are mapped close to the known class distributions.

The training and testing of XDD is conducted in the following steps.

In steps two and three, the training data does not contain the anomaly samples. The labeled normal class samples are given in addition to the unlabeled training samples in step two.

The inter-class max margin loss Linter is defined as follows.

(9) penalizes the inter-class pairs that are distant by less than Rdis. We set the threshold Rdis

at the maximum of the sum of mean and two standard deviations of the intra-class distances in each batch.

The max-margin intra-class loss Lintra is defined as

where Rsim is the radius of the component sphere. We set the Rsim at the median of the intra-class distances in each mini-batch.

The GAN loss is minimized along with the intra- and inter-class distance losses to maintain the consistency of discriminator representation.

The three terms in (11) differ substantially in scale, upon which we employ the blocked coordinate descent for training [5].

In testing, we compute the anomaly score of a test sample by kernel density estimation (KDE) using the projections of the labeled examples.

We present an experimental result using the MNIST dataset. The architectures of the generator and discriminator networks are shown in Table 1

We adopt the standard setup from previous studies [1, 10] for anomaly detection using MNIST. For training, we exclude one digit as the target anomalous class from the original set and measure the detection performance on the test set using the area under the ROC and the precision-recall curves. The few-shot setting is n-shot nine-way problem, i.e., n=10 labeled samples of each class were randomly chosen.

Figures 3 and 3 illustrate the low-dimensional projection of the test samples using t-SNE [8] after pre-training and after the XDD training. The samples are represented by triangles of colors corresponding to respective classes while the labeled examples are represented by black ∘’s and ×’s. This result was obtained when the anomalous target class is eight (yellow).

The information bottleneck principle is a principle for extracting relevant information in an input varibale X about an output variable Y. The relevant information is defined by the mutual information I(X;Y), assuming statistical dependence between the two variables. We further attempt to learn a compressed representation of X, by discarding irrelevant features that do not contribute to the prediction of Y.

We denote the compressed representation by Z. In the context of this paper, Z∈Z is the embedding of X∈X by a deep learning model f, such that f:X→Z⊂Rd. The compression rate and the distortion given X and Z can also be measured by the mutual informations I(X;Z) and −I(Z;Y), respectively.

Finding an optimal Z leads to a Lagrangian

Minimizing (12) is seen as the rate-distortion problem where the Lagrangian multiplier β represents the trade-off between the compresssion rate and the distortion.

We model the empirical distribution of p(z) by the average of the dirac delta functions,

and the conditional distribution p(z|xi)

as a normal distribution

(16) represents the sum of distances between all pairs of z. We assume σk to be small enough that D(zi,zj)<<D(zi,zk) for all pairs i,j,k such that yi=yj and yi≠yk.

Meanwhile, we model the class conditional probability over z as follows.

The mutual information I(Y;Z) can be rewritten as follows

(18) is equivalent to the MAP loss function except for the class bias.